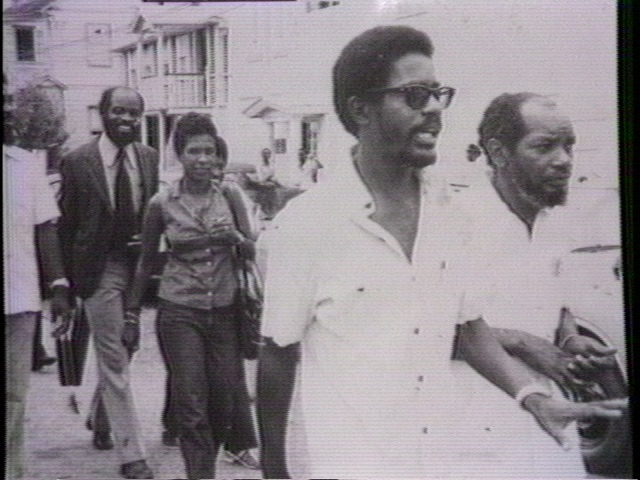 In 1979, the small revolutionary group, the Working People’s Alliance, transformed itself into a party and launched a major rebellion. Thousands joined the new party to challenge the dictatorship. Strikes broke out across the country involving African and Indian workers. Chinedu Chukwudinma writes how the WPA understood that socialism could only be achieved through the self-emancipation of working people. Walter Rodney emerged as the key revolutionary leader.

At around 2am on 11 July 1979 someone set the Ministry of National Development in Georgetown on fire. Forbes Burnham knew who to blame for the arson, though he had no proof. In the afternoon, the police arrested Walter Rodney and six other Working People’s Alliance (WPA) members. The dictator hoped to silence his opponents, but little did he know that the arrest would turn the WPA into a mass party with Rodney as the people’s leader. When news of the arson spread across the country, working people in Georgetown, on the cane fields and in the mining communities gathered to discuss and condemn Rodney’s arrest. In the capital, hundreds joined the WPA’s pickets in front of prisons to identify the whereabouts of the prisoners and to campaign for their freedom.

On 14 July, thousands rallied in front of the courthouse demanding bail for the arrested. So great was the outcry that the judge agreed to release the WPA leaders against the ruling People’s National Congress’ (PNC) wishes. Upon hearing the news, the multiracial protesters marched in triumph through Georgetown. All the political parties and organisations that opposed Burnham’s dictatorship figured among those who supported the WPA. But the euphoric mood quickly vanished. Burnham deployed the armed militia of a religious group, the House of Israel, to break up the demonstration. The attackers stabbed a British Jesuit journalist Bernard Darke to death and wounded two WPA members. State repression did not tame the masses but fuelled them with rage. They initiated the civil rebellion against the PNC.[1]

From July to November 1979, mass protests and strikes shook the PNC dictatorship. The people expressed their anger at the cuts in wages, healthcare, and transport that the PNC had imposed in order to reimburse the loans from the International Monetary Fund (IMF) in 1978. They held the government responsible for the high unemployment rates, which stood at 30 per cent. Faced with deteriorating living standards and lacking democratic rights, they could no longer tolerate the corruption that plagued the ruling party. Burnham grew nervous upon learning that African miners mounted a strike that paralysed the bauxite industry. It was the first time he faced a major rebellion among his African support base. The miners’ strike against the public sector wage freeze also spread to parts of the civil service. At first, Burnham refused to declare the strike illegal, as he usually did, not wanting to frustrate the many PNC trade unionists who were involved. But Burnham’s greatest fear became reality when 20,000 Indian sugar workers struck in solidarity with the miners a month later. Faced with the prospect of a multiracial general strike, Burnham and his cronies felt that power was slipping out their hands.

In the pamphlet he wrote during the rebellion, People’s Power, No Dictator, Rodney told the masses about the central importance of strikes for advancing the political struggle against the dictatorship:

United strike action teaches us how the dictator can be exposed and how he can be deposed… The dictator requires the population to produce so as to sustain himself and the clique of parasites who dominate Guyana. That is why the mass withdrawal of labour is the ultimate weapon representing the power of the people.[2]

Rodney and the WPA tried to ensure that people supported the strikes through their individual and collective acts of resistance to Burnham. On 20 July the WPA organised its largest ever rally which attracted 8,000 people to the Bourda Mall, an open space where public meetings and markets were held in Georgetown. Rodney delivered a fiery speech in which he declared “the PNC must go by any means necessary”.[3] The Guyanese people were amazed to hear someone articulate their feelings with such honesty and courage. A week later the WPA established itself as a political party geared towards the conquest of state power. Rodney and his comrades understood that the rebellion called on them to connect and direct all the struggles that had erupted in the towns, mines, and the countryside. They aimed to transform these localised struggles over wages and democratic rights into general ones against the dictatorship. And they knew this task meant doing more extensive organising and agitation among the working people than before.

Before becoming a political party, the WPA had strict conditions of membership and stressed discipline and ideological unity among its dozens of volunteer cadre.[4] Having a tight-knit organisation of a few trustworthy members was necessary to withstand harassment from Burnham’s authoritarian regime. There was no mass movement behind which the WPA members could hide. It therefore had to rely on its trained cadres to constantly carry out operations while facing the threat of police infiltrators and raids. The WPA’s ability to survive these difficult circumstances was the result of the meticulous planning of its leaders and the political education of its members.

Now, in the wake of the civil rebellion of 1979, the WPA leaders abandoned their strict recruitment policy. They opened their party’s membership to the hundreds of Africans and Indians of all ages and social backgrounds that asked to join them as long as they agreed with its principles and rules. The WPA leadership had shown an astonishing degree of flexibility and audacity by overcoming the organisation’s old habits, routines, and fears of police spies. It derived its newfound determination to grow its ranks and lead the struggle from the large attendance, the electric applauses, and the ovations that the WPA received at its public meetings. The WPA still maintained its emphasis on the political training of its membership and the formation of a revolutionary cadre. It created education classes and branches called “nuclei” for its party members and organisers, where they read radical literature, such as Lenin’s What is to Be Done and Amilcar Cabral’s Party Principles and Political Practices.[5]

What did the WPA stand for? “The alliance is revolutionary and not reformist”, it asserted in its programme. The WPA meant that socialism could only be achieved through the self-emancipatory struggles of the oppressed masses against their rulers. Rodney expressed this idea when he said that “the revolution is made by ordinary people, not by angels, it’s made by people from all walks of life, and more particularly by the working class who are in the majority”.[6] It therefore rejected the idea that a small group of enlightened and benevolent leaders could gradually deliver socialism to the passive and grateful masses. This understanding made the WPA different from the PNC who identified ‘socialism’ with state ownership of the economy by a handful of bureaucrats. It also made the WPA different from the People’s Progressive Party (PPP) which saw elections—winning a majority in the Assembly and passing laws—as the means to deliver socialist change. [7] The WPA also opposed the cult of personality that had evolved around Forbes Burnham and Cheddi Jagan. “We profoundly distrust the Messiah approach of political parties,” said Rodney, “we are trying to mobilise the energies of the vast majority of the population”.[8] Unlike the PNC or PPP, the WPA established a collective leadership of 15 members, with a rotating chairmanship to ensure that nobody monopolised power.

There was a striking resemblance between the WPA’s claim to see “the revolution in each country as permanent” and Leon Trotsky’s theory of permanent revolution. [9] Seventy years before, the Russian revolutionary had argued that, even in underdeveloped countries, the fight for democratic rights could grow over into a struggle to expropriate the capitalists and create a socialist society, provided the working class led the revolution with the support of the oppressed. By permanent revolution Trotsky further meant spreading the revolution beyond national borders. However, there was also reason to believe that Trotsky’s theory did not influence WPA intellectuals. While Trotsky conceived revolution as a fluid process, the WPA expected it to present two distinct stages in Guyana, which supposed the realisation of a democratic state as a pre-condition for socialist change.

The WPA programme nevertheless did converge with Trotsky’s ideas in several ways. First, it recognised the leading role of the working class in the revolutionary process. Second, it stressed the need for an alliance between workers and peasants. The WPA programme of 1978 voiced democratic demands such as land for the peasants, the right to work, freedom of the press. These accompanied its calls for workers’ control over the factories and the creation of workers’ assemblies as new ruling organs.[10] Third, the WPA was committed to internationalism. It built ties with the Grenadian socialists who overthrew their dictator in March 1979 and sent WPA members to help with the Grenadian Revolution. That year, the WPA observed with excitement the Sandinista revolution in Nicaragua, the Iranian Revolution and the Surinamese coup d’état. The rise of the civil rebellion offered its members hope that Guyana was next in line.

WPA leader Eusi Kwayana said that the rebellion “saw almost the whole society creeping out of the shadows into the light of hope, standing in defiance of the power that was … imposing economic and financial oppression and hardship”.[11]The mass rallies that the WPA organised at the height of the rebellion turned into spontaneous marches. In the countryside and the towns, people took to the streets drumming and chanting their favourite slogan: “People Power, No Dictator”. Rodney’s activism was relentless during the Rebellion. He travelled throughout the country to organise and speak at rallies. People promoted his meetings by word of mouth, never with leaflets. He appeared, spoke and captivated the masses, then left before the police or Burnham’s thugs could catch him. His speeches broke the wall of silence and fear around the dictatorship as he mocked Burnham, baptising him “King Kong”.[12] Rodney thus emerged out of Guyana’s highest moment of struggle as the key revolutionary leader of the people.

Featured Photograph: we are grateful to Christopher Laird for the image.

[7] The PPP’s reformism became more apparent once Guyana held its first free and fair elections in 1992.