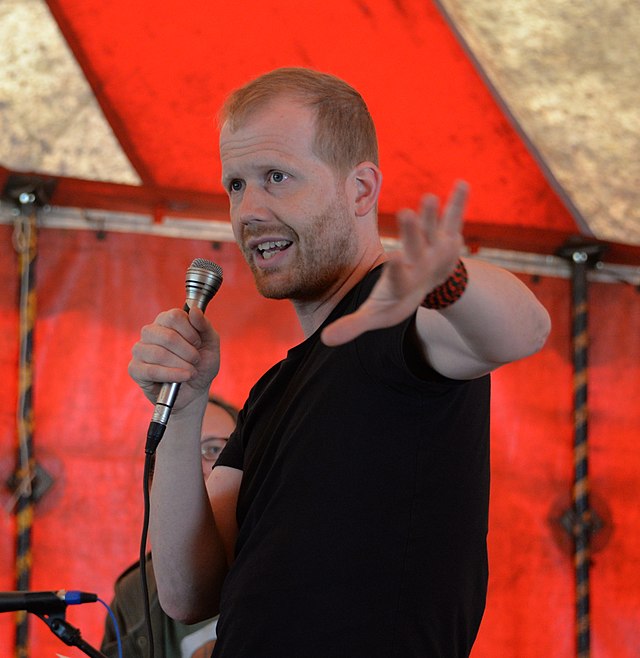 In the tradition of ROAPE, Andreas Malm is a scholar-activist who maintains that scholars must be actively engaged in campaigns and struggles. Whilst a PhD student, he wrote about accumulation and dispossession in Egyptian fishing communities which was published in ROAPE in 2012.

The research for his PhD became the basis for his pathbreaking 2016 book Fossil Capital. Britain’s embrace of coal came relatively late – waterpower remained dominant for decades after James Watt’s development of the steam engine. Fossil capitalism arose from a desire to concentrate industry in cities, thereby avoiding the complex engineering needed to sustain water-powered production, which would have necessitated co-operation between mill owners; it also allowed for a greater concentration of labour, more easily disciplined, and exploited. Therefore, it is capitalism, not human beings, that is changing the climate; industrialisation itself is less of a problem than the fossil system that powers it; the overwhelming focus of climate activism must be on dismantling fossil infrastructure.

In 2018 Malm published The Progress of this Storm: Nature and Society in a Warming World, where Fossil Capital was a revision of the history of the industrial revolution, this is a theoretical, methodological, and analytical work. “This essay sets out to scrutinise some of the theories circulating at the nature/society junction in the light of climate change.” Post-modernist theories are the main target, including ‘Constructionism’ and ‘Hybridism’, but also ‘New Materialism’. What survives he calls ‘Property Dualism’ which seems to be a derivative of historical materialism.

As Malm writes “… some theories can make the situation clearer while others might muddy it. Action remains best served by conceptual maps that mark out the colliding forces with some accuracy. … Theory can be part of the problem…. An adequate theory should be able to grasp, the problem as historical.” The conclusion connects with the need for action: “Dare to feel the panic. Then choose between the two main options: commit to the most militant and unwavering opposition to this system. … As for theory, it can only ever play a very limited part in such a project. But at least it should not be a drag on it.”

Using the climate crisis as his core theme, Malm has since gone on to explore how the Covid pandemic reveals the consequences of the destruction of the natural environment in his 2020 book Corona, Climate, Chronic Emergency: War Communism in the Twenty-First Century. This relatively short book relates the Covid-19 pandemic to the climate emergency and rejects lessons from the how most advanced capitalist countries handled the pandemic, which were focused on saving capitalism and getting back to normal. Keynesian solutions may have saved capitalism in the second world war but will not save the world in the climate emergency. Instead Malm proposes something more akin to War Communism as in the infant Soviet Union in the early 1920s.

‘The contrast between coronavirus vigilance and climate complacency is illusory. The writing has been on the wall about zoonotic spill-over for years, and states have done as much to address it as they have done to tackle anthropogenic climate change: nothing.’ When the crisis struck, Malm might have added, government action was directed towards shoring up existing property relations and the existing distribution of wealth and income. The interventions were gigantic but overwhelmingly conservative in their intentions and effects.

International agreements are brutal lessons in the art of the possible, but even the most hard-nosed realist might think that the behaviour of the richest countries has veered between the myopic and the abhorrent. As the Sudanese delegate put it at the UN climate conference in Paris, this diminution of ambition meant ‘asking Africa to sign a suicide pact, an incineration pact in order to maintain the economic dependence of a few countries [on fossil fuels]’. It was signed anyway.

Malm is clear: ‘The grotesque concentration of resources for burning at the top of the human pyramid is a scourge for all living beings; an effective climate policy would be the total expropriation of the top 1 to 10 per cent.’ Malm loathes apologias for quietism and inaction, usually from writers ensconced near the top of that pyramid. Instead, he proposes an ecological version of Pascal’s wager: a radical eco-modernism might eventually run aground on its own contradictions but is the only progressive politics possible in society as it currently exists.

Emphasising the centrality of political activism, he criticises the (largely) Northern climate movement, and models that preach a non-violent approach to climate justice in his 2021 book How to Blow Up a Pipeline: Learning to Fight in a World on Fire. This provocative book is in three short sections. The first attacks the non-violent approach of most climate activists through correcting the false historical arguments they use (the end of slavery, women’s suffrage, Gandhi, Mandela), none of which were non-violent against property (although they tried to avoid violence against people). The second (Breaking the Spell) admits the power and determination of the enemy, but also draws on more recent successful campaigns, showing how progress can be made against the forces of fossil capital, and the final one (Fighting Despair) gets down to some concrete actions with realistic chances of success.

As Malm writes, “Here is what this movement of millions should do, for a start: announce and enforce the prohibition. Damage and destroy new CO2-emitting devices. Put them out of commission, pick them apart, demolish them, burn them, blow them up. Let the capitalists who keep on investing in the fire know that their properties will be trashed. ‘We are the investment risk,’ runs a slogan from Ende Gelände, but the risk clearly needs to be higher than one or two days of interrupted production per year. If we can’t get a serious carbon tax from a corrupted Congress, we can impose a de facto one with our bodies.”

Malm’s current research looks at how the far-right are using the climate crisis to spread their ideology and grow. In a nod of appreciation to Franz Fanon this is discussed in detail in his 2021 book White Skin, Black Fuel: On the Danger of Fossil Fascism. Although climate-change denial was almost universal on the far Right, this was because the issue was a distraction from their anti-immigrant bottom line, and as it concerned the whole planet was potentially hostile to nationalist border-reinforcing policies. Some far right parties therefore began to develop an argument along the lines of ‘if it is happening, then it’s not our fault, but the fault of Muslims, non-whites et al. who must be kept out.’ We developed thanks to fossil fuels and must be allowed to continue exploiting our own reserves (and driving cars rather than sharing buses with ‘them’). Hence moves towards fossil fascism or eco-fascism.

The association between fossil-fuel exploitation and racism is comprehensively demonstrated at various levels over the five books. Fossil-fuel capitalists may have few qualms about dallying with and funding the far Right, but racism is not their bottom line. Likewise, with its racist bottom line, the far Right’s knee-jerk reaction is denial, but racism can retreat behind its relatively safe northern borders and accept that the rest of the world may burn.

Unlike How to Blow up a Pipeline, whose final chapter is called ‘Fighting Despair’, White Skin, Black Fuel concludes with ‘Death Holds the Steering Wheel’, arguing that a death-wish behind fascism, reinforced by capital’s inability to see a future without its own dominance, is the dominant trend and we must try to fight back.

Malm is now an internationally recognised militant scholar and speaker who still maintains his roots in activism. In a wide-ranging discussion with ROAPE’s Peter Dwyer he engages with African political economy, the climate emergency, anti-capitalist alternatives to development and radical thought and politics from Frantz Fanon to Walter Rodney.

Colin Stoneman is a long-standing member of the editorial working group of ROAPE, and the review’s treasurer. Colin is retired from a teaching post at the University of Leeds.