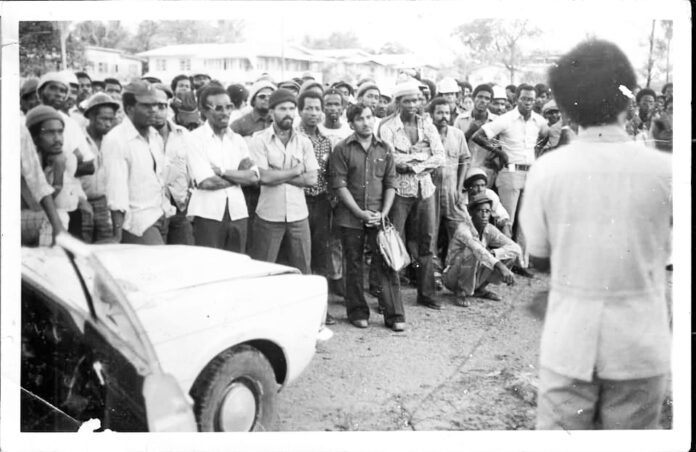 In 1974 the Working People’s Alliance emerged as an anti-racist and anti-imperialist formation that fought for socialism from below. To start with it was not an electoral party, but a pressure group that united Pan-Africanist and Indian socialist organisations. Chinedu Chukwudinma describes how Walter Rodney’s uncompromising use of Marxist theory and practice transformed him into the foremost organiser of the Guyanese working people.

The racial conflict in Guyana produced a political system that only allowed space for Forbes Burnham’s People’s National Congress (PNC) and its opposition, Cheddi Jagan’s People’s Progressive Party (PPP). Both parties preached a version of socialism from above that favoured the petty bourgeoisie’s control over the state, never the masses. Burnham blatantly discriminated against the Indo-Guyanese, while Jagan talked about racial unity but, when it came to elections, only campaigned among Indians.

In 1974, amidst this political deadlock, the Working People’s Alliance (WPA) emerged as an anti-racist and anti-imperialist formation that advocated for socialism from below. It was not an electoral party, but a small pressure group that united Pan-Africanist and Indian socialist organisations aspiring to build mass action against Burnham’s dictatorship. Rodney, however, joined the WPA as one of its few independent members. He befriended Eusi Kwayana, the group’s co-founder and a well-known Pan-African activist, who had left both the PPP and PNC out of disgust for their racial politics and their corruption. Many of the WPA co-founders had also grown disillusioned with the major parties and sought a new politics to overcome the racial divide among the working masses. Rodney’s uncompromising use of Marxist theory and practice to foster working class unity helped them to find it.[1]

One of the WPA’s first major anti-racist interventions occurred when it defended an Indian PPP activist Arnold Rampersaud, who the PNC had framed for the murder of an African policeman. At the solidarity rally, Rodney gave a moving speech calling on the Afro-Guyanese to resist Burnham’s attempt to manipulate them against the Indians. When a policeman ordered Rodney to stop speaking, the multiracial audience surged forward, removed the officer, and allowed Rodney to finish his speech. Thus began his transformation into a full-time organiser of the working people. The Guyanese respected Rodney as a Marxist scholar and activist, still unaware that he was soon to become their foremost leader.[2]

Rodney and the WPA established bases. They led reading groups and spoke at public meetings in Georgetown and in the bauxite mining regions. Rodney enjoyed lecturing miners on Marxist political economy and the Russian Revolution of 1917 as well as discussing Guyanese politics and labour conditions in the Bauxite regions. The WPA’s influence among the Indian sugar workers was less notable because it did not seek to infringe upon the territory of their allies, the PPP. The WPA considered the PPP allies because it was the main opposition to Burnham’s regime and the main political force within the Guyanese labour movement. It derived the largest share of its support from the Indian sugar workers and their trade unions. Although the WPA knew very well that Jagan’s PPP represented a false alternative to Burnham’s regime, it still sought to work with them. Rodney and his comrades understood that operating alongside the PPP would allow the WPA to spread its ideas of racial unity and its advocacy for rebellion against Burnham among PPP supporters to draw them closer to its radical politics.

WPA encountered several difficulties when trying to find common ground with the PPP. By 1975, the PPP had changed its attitude towards the PNC following Burnham’s ideological shift from anti-communism to pro-communism. It no longer argued for ‘non-cooperation and civil disobedience’ against the PNC but now declared ‘critical support’ for it. [3] The PPP’s new political line was the consequence of the advice it received from the Soviet Union, which did not want to see two socialist parties in conflict with each other. As a result, the PPP decided to support Burnham’s nationalisation programme and abandon all boycotts of the rigged parliament. In 1977, the PPP even proposed a National Patriotic Front Government where it would share parliamentary power with the PNC. Burnham, however, rejected the proposal after a series of futile negotiations.

The eruption of the 135-day strike of 1977 and 1978, the longest in Guyanese history, afforded the WPA an opportunity to engage with Indian sugar workers, which generally supported the PPP. The WPA successfully convinced African miners to donate in support of the 21,000 striking Indian plantation workers. Its collection for the strike relief challenged the idea that all Africans were scabs, especially after Burnham had sent unemployed Afro-Guyanese to replace or terrorise the strikers. The PPP-backed Guyanese Agricultural Workers’ Union, which had called the strike, invited WPA members to speak at their public meeting. Rodney’s speech again impressed the workers. The crowd grew bigger and bigger and overflowed onto the streets as he spoke about racial unity. When the WPA speakers left to attend another rally nearby they were surprised to see that the crowd had followed them.[4]

Although the WPA relied on only a few dozen activists it escaped the most critical pitfalls of sectarianism that Rodney had observed among many small groups on the British revolutionary left in the 1960s. Whereas these sects used complex jargon and concepts that alienated British workers, the WPA with its slogan ‘bread and justice’ spoke to the Guyanese workers in a language they could understand. The WPA often refrained from declaring its socialist ideology in public to set itself apart from the PNC’s abuse of the term socialism. More importantly, sectarianism meant that British sects failed to build links with mass movements, preferring to latch on to their empty socialist dogma – even if that meant isolation from the working class. The WPA, on the contrary, looked to foster mass support and action against Burnham’s government by building and participating in broad coalitions and campaigns. In 1978, they campaigned with the PPP, trade unions and civic organisations to boycott the PNC’s referendum to reform the constitution and extend Burnham’s presidential powers. The regime nevertheless declared victory in the referendum, despite the low voter turnout.[5]

Alliance building, however, presented another pitfall for the WPA – that of entering the wrong kind of alliance. In 1977, the WPA fell into that trap when it welcomed the PPP’s futile proposal for National Patriotic Front Government, though it had its reservation. Shortly after the WPA became a political party in 1979, it proposed a multi-party Government of National Unity and Reconstruction. There was a noteworthy difference between the proposals: the PPP wanted to share power with Burnham’s PNC, while the WPA wanted to overthrow the PNC regime and replace it with a caretaker government of progressive forces. However, both proposals rested upon belief that “all classes in Guyana had an objective interest in national unity” as Rodney declared in one of speeches. [6] This view was mistaken. The objective interest of workers—their self-emancipation from exploitation—never could be reconciled with that of the petty bourgeoisie, which hoped to exploit Guyanese labour.

While the WPA’s anti-referendum campaign of 1978 was an alliance between working class and grassroots organisations over specific aims, its proposal for National Unity Governments sought to include organisations of the petty bourgeoisie (businessmen, big farmers, civil servants, barristers) to form a bourgeois government.

It envisaged a long-term cooperation between classes around a liberal programme that consisted in restoring the national economy, civil liberties, and the rule of law. Such a programme contradicted the WPA’s socialist aspirations as it implied the subordination of its socialism from below to bourgeois parliamentary politics.[7] If any of the National Unity Government plans of the 1970s had materialised, they likely would have had tragic outcomes for the WPA in the advent of a major popular uprising. Rodney and his comrades would have found themselves caught between workers’ struggles and the petty bourgeoisie’s desire to restore order. Would they have defended ‘national unity’ against the workers?

The WPA made mistakes, but it was not afraid to experiment. Through trial and error, it gradually rooted itself among the working people and played an increasing role in their struggles. The organisation produced a single newssheet called Dayclean, which its members regularly distributed at protests, rallies, and door-to-door. This newssheet did not stop at exposing the dreadful conditions of the working people. It provided a critical overview of Burnham’s state capitalism, of racism in Guyana and outlined the significance of popular struggles against it.

As Burnham’s PNC banned all free press, the WPA found it difficult to turn Dayclean into a substantial newspaper. The police raided its offices, seized all ink and printers, and arrested those who sold the paper. The WPA, however, heroically strove to print Dayclean when possible, alongside pamphlets and manifestos that reflected its socialist ideology—to lead the revolution in each country, promote women and education, fight against racism and build a classless society. The rise of the civil rebellion of 1979 would encourage the WPA to transform itself into a mass revolutionary party that would pose as a real alternative to Burnham and Jagan.

[5] On the anti-referendum campaign see Working People’s Alliance, Arguments for Unity Against the Dictatorship in Guyana, 1983, p2.