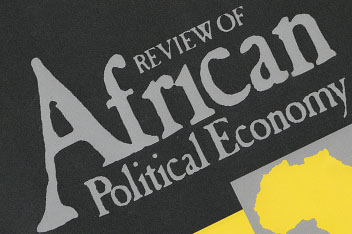 By the Editorial Working Group

The Roots of Africa’s Present Condition

The Review of African Political Economy was established in 1974, with the aim to ‘examine the roots of Africa’s present condition’ and problems such as inequality and dependency. Yet, the Review did not seek to promote scholarly research for its own sake, but instead sought to engage with the actions required for transformation. The aim, in short, was to provide a space to help sharpen understandings and analysis of developments in order to equip movements and activists to revolutionise the continent. Empty academic research without political action, plans and projects were shunned. However, the Review would not, so the original editorial stated, propose tactics and strategy that could only be answered in the actual struggles taking place on the continent. Rather it would become a forum which could sharpen analysis and help facilitate meaningful practice.

What was happening on the continent when the Review was founded? 1974 was a key moment. The first wave of independence in Africa had already passed and the countries that had become independent offered little real liberation. As the South Africa revolutionary Ruth First, one of the first editors of the Review, had already stated, decolonisation had been a ‘bargaining process with cooperative African elites …The former colonial governments guarded its options and … the careerist heirs to independence preoccupied themselves with an ‘Africanisation’ of the administration.’

New movements were now challenging both Portugal’s colonies and the white minority regimes of Southern Africa and the limitations of the first wave of independence. Exciting political formations were on the verge of taking power in Mozambique, Angola and Guinea Bissau. The Review wanted to interrogate these revolutionary projects as part of the second wave of critical decolonisation. It also sought to understand the patterns of power and economic control that had been developing across the continent since the late 1950s.

As a fraternal voice of the new movements that were sweeping the continent, the Review attempted to analyse the progressive politics of the new forces of liberation that were emerging and interrogate those radical projects that already existed.

Some of the scholar-activists involved in founding ROAPE, including the late Lionel Cliffe, whose idea it was, had recently returned from Tanzania where they had been involved in the experiments in socialist development in the country, critically supporting – mainly through teaching, writing and influencing local activists and policymakers – Julius Nyerere’s attempts to break the colonial legacy of underdevelopment. They were joined by others who had worked elsewhere in Africa, including most notably Ruth First. They were based in the UK, but often in transit, moving between the continent and the UK. The first generation involved in ROAPE were scholar-activists not career academics, and were a committed (and diverse) political community seeking to assist the continent’s radical transformation.[1]

However, in the 1980s the desired change – and eventual move – crashed on the rocks of structural adjustment, globalisation and authoritarian state-led development. The Review remained committed to providing radical analysis of the continent’s transforming political economy through the 1980s and 1990s. While it remains based in the UK, its Contributing Editors span the continent and it sustains a growing programme of workshops and conferences in Africa.

The new website seeks to help reinvigorate scholar activism in and about Africa, and to involve new communities on the continent and elsewhere in a host of ROAPE activities, projects, conferences and events.  The aim is to develop a new audience for the Review, to generate material for both the website and for the print issue, and to build deeper and sustainable connections with scholars, students, activists and institutions who work in and on Africa.

The site holds videos of conferences, interviews with scholars and activists, regular conference reports, a blog, details about ROAPE bursaries, ongoing ROAPE projects, reviews, longer online articles and free access through the publisher Taylor and Francis to our Briefings and Debates. We have a close connection to the French language site Afriques en Lutte who have many years’ experience covering social movements and uprisings in francophone Africa, and will provide coverage of developments and struggles taking place across French speaking Africa, events that are frequently invisible to an increasingly Anglophone world.

Towards these new objectives ROAPE is working with the Society, Work and Development Institute (SWOP) at the University of the Witwatersrand in Johannesburg. The aims of ROAPE are compatible with the work of SWOP and the community of researchers and students within the institute and university and the activist orientation of many of the activities and research conducted by the institute. Johannesburg is also a unique African hub for visiting researchers from the continent, with a thriving radical community of activists and scholars. ROAPE hopes to develop these connections with SWOP through a number of initiatives – ROAPE/SWOP workshops, conferences and events, seminars and launches.

These connections and partnerships build on existing relationships that ROAPE has established. ROAPE collaborates with Third World Network-Africa (TWN), a pan-African research and advocacy organisation based in Accra, Ghana. With ROAPE Africa Editor and member Yao Graham, co-ordinator of TWN, we organise conferences and workshops and collaborate on the African Initiative on Mining, Environment and Society (AIMS).

We want to develop the website to become a leading online resource for radical political economy in Africa. The 1974 editorial explained that it is to ‘the task of understanding, and countering the debilitating consequences of a capitalism which stems from external domination and is combined with internal underdevelopment and equally exploitative structures that this review is dedicated.’ This project remains ours today.

[1] Initially the people who got the Review off the ground in addition to Lionel and Ruth were Gavin Williams, Robin Cohen, Katherine Levine (now Salahi), Jan Burgess, Manfred Bienefeld and Peter Lawrence.