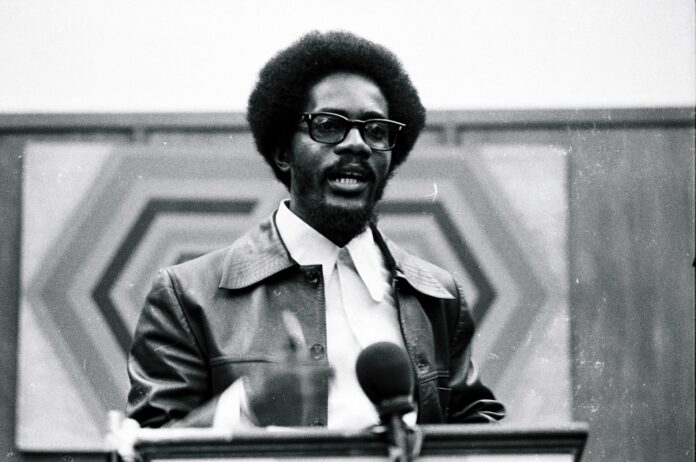 On 13 June 1980, the Guyanese revolutionary Walter Rodney was assassinated in Georgetown. In the final part of Chinedu Chukwudinma’s biography A Rebel Guide to Walter Rodney he celebrates Rodney’s revolutionary organising and focus on worker’s power. Rodney remains an exemplar to revolutionaries fighting to change the world today.

In his short biographical sketch of Rodney, Working People’s Alliance (WPA) leader Eusi Kwayana identified Rodney as ‘the prophet of self-emancipation’. Everywhere he went, Rodney fought alongside the working people, inspiring them to conquer their freedom. The more he travelled and engaged with the masses, the more he embraced Marxism as his theory and practice of working-class revolution. Rodney’s activism in Jamaica shaped his belief in the duty of revolutionary intellectuals to be involved in the struggle against imperialism and capitalism.

Radical intellectuals do not belong in the university. They must go to the oppressed, learn about their struggles, and use their intellect for the struggle for liberation. Rodney followed this path by meeting with Rastafarians and listening to radical youths. His ability to understand and relate to the masses led him to deliver a powerful message of Black Power. He articulated the grievances of the masses while telling them to reclaim the Caribbean from imperialism and its local allies.

His progress from Black Power activism to socialism became apparent when he lived in Nyerere’s Tanzania. Rodney used Marx’s historical method to write his masterpiece How Europe Underdeveloped Africa. He produced a history of the exploitation of African workers and peasants by the western bourgeoisie, to prove that Africa’s development was impossible until it broke with capitalism. He left Tanzania convinced that enlightened leaders could not deliver socialism—it had to be won from below. Rodney had discovered in the strikes of Tanzania the unrivalled power and militancy of the working class. Only they had the power and the vision to build a new democratic society, a socialist one.

Rodney developed his appreciation of worker’s power when he returned to Guyana and organised for the WPA. His writings, speeches and activism revealed the importance of Marxism for explaining and fighting racism. He saw racism as a product of capitalism, wherein capitalists divided the working class to ensure its exploitation. He proposed to end it with a revolution that united African and Indian workers against Burnham’s dictatorship. Rodney then recognised the need for a mass revolutionary party to foster that racial unity. His WPA, which had grown its ranks from dozens to hundreds while bravely leading the struggle against Burnham in 1979, still did not have enough members, experience, and influence to face the state repression and lead the civil rebellion to victory. If the mass party had established itself years before the rebellion, it perhaps would have been better prepared to influence the struggle. But the WPA never fully recovered from Rodney’s assassination.

Although Rodney died at only 38 years of age, he left behind him a colossal body of work that will inspire the next generation of revolutionaries. That makes him the prophet of self-emancipation.

The beauty of having an online serialisation of the book is that it allows me to thank those I forgot to mention in the acknowledgements of the printed edition of the book. Above all, I thank one of Tanzania’s best graffiti artists, the legendary Mejah Mbuya, for introducing me to Walter Rodney in 2010 when visiting my family in Tanzania. He gave me a copy of Groundings with My Brothers, but it took another two years before I opened the book. By the time I decided to read the book, I was already, unapologetically, a left-wing Black Nationalist enamoured with Malcolm X, the Black Panthers and playing Dead Prez’s first album Let’s Get Free on repeat. Although Rodney published his book in 1969 as a Black Power manifesto for the Caribbean, I felt Groundings spoke directly to my experiences as a black man growing up in Europe, where I found myself arguing with teachers who claim that colonialism had some benefits for Africa.

Rodney’s pamphlet was a powerful, daring, and bold effort to uproot African history from the racist myth’s surrounding its past. Yet, it was not the clichéd narrative of African kings and queens that I grew accustomed to hearing when attending an informal Pan-African university run by Afro-centrist philosophers and hoteps (a term used to describe Afro-centrists). It was an honest portrayal of African history in all its dynamism and complexity that fostered pride in my African identity.

I’m grateful to Mejah and the African American historian Seth Markle for insisting that I read How Europe Underdeveloped Africa (HEUA) while having long conversations with them on the beach and at a hip hop block party when I returned to Tanzania in 2011-2012. I read Rodney’s seminal masterpiece and referenced it in almost every single essay that I wrote during my university years, and I still read it today. My book only offers a summary of the main argument of Rodney’s book, which will hopefully encourage young activists and radical scholars to read it. A much lengthier discussion of the arguments and the contemporary relevance of Rodney’s masterpiece is found in Karim Hirji’s excellent book The Enduring Relevance of Walter Rodney’s How Europe Underdeveloped Africa (2010) and more recently in Leo Zeilig’s monumental biography of Rodney (2022).

In a blogpost  from 2019, I attempted to make a left-wing critique of Rodney’s reliance on dependency theory in chapter 5 of HEUA. Although I still stand behind the ideas of the article, I have avoided any further discussion of them in my book. I wanted HEUA to be celebrated as a Marxist history of Africa in its own right. Of course, I surprise no one in saying that it stands at opposite poles to the bourgeois history of ‘Great Men’. But the book also distinguishes itself from most ‘histories from below’, which tend to examine a designated event from the standpoint of the people. What these histories from below too often overlook is the interrelations of events, the broader social and material forces that influence the lives of individuals. Instead of conceiving history as a set of isolated events, Rodney sees it as a continuous process that leads to the present, where African underdevelopment cannot be explained without understanding the catastrophic impact of the slave trade and colonialism.

There have been numerous attempts to develop the powerful framework set by Rodney’s masterpiece. I have recently enjoyed reading Manning Marable’s How Capitalism Underdeveloped Black America (1983). Concerning Africa, Lee Wengraf’s Extracting Profit (2019) provides in some respects an updated version of Rodney’s analysis while drawing more heavily on the classical theory of imperialism sketched by Lenin to make sense of Africa’s condition in the 21st century. She skilfully unravelled how the inter-imperialist rivalry between the major superpowers, the United States and China has driven a new scramble for African resources, namely oil. Nevertheless, it is important to remember that Rodney’s magus opus ends with a radical call for action ­– a call for workers and peasants to take control of their destiny.

I stress this last point because what Lenin observed about Marx and Engels’ legacy increasingly applies to Rodney’s. Opportunists will seek to turn him into a “harmless icon” and abuse his name to manipulate the masses. At the same time, they will water down his revolutionary theory, “blunting its revolutionary edge and vulgarizing it”, as Lenin wrote. A recent example of this opportunism is found in the 50 years celebration of How Europe Underdeveloped Africa at SOAS, University of London, hosted by none other than Adam Habib, the director who used the n-word in a student webinar, and with a black vice-chancellor who gladly agreed to be anointed by the Queen as the main discussant.

The real revolutionary essence of HEUA and Rodney’s entire body of work can only be captured by those who have a genuine interest in fighting imperialism. And I do not doubt that the significance of Rodney’s politics will grow in proportion to the new radical working-class movement that emerges today. One of Rodney’s former comrades once explained that during Portugal’s Carnation Revolution of 1974, which was largely set in motion by the anti-colonial struggles in Portuguese-speaking Africa, one could find Rodney’s HEUA in every bookshop in Lisbon. The revolutionaries were changing the world and, in the process, changing themselves. They had come to detest fascism, colonialism, and all forms of oppression, and naturally, they sought to learn from those who spoke against them, such as Rodney.

The multiracial Black Lives Matter protest of 2020 had a similar tantalising effect on those who supported it. Hundreds of thousands of young people in Minneapolis and New York City were challenging state racism and police brutality. In London and Bristol, they were questioning history by vandalising the statues of the white supremacist Winston Churchill and pulling down the statue of a racist slave owner. The young people I spoke to during those protests showed an unapparelled desire to uncover the voices of those who stood against imperialism and the legacy of empire from Frantz Fanon and Angela Davis to Walter Rodney.

Although the Black Lives Matter movement is on the downturn, I pray that it will return in some form, stronger and more powerful than ever before. Getting involved in a revolutionary organisation and drawing lessons in struggles from Rodney’s achievements and failures is undoubtedly one the best ways to prepare for that return.

To order Chinedu’s book, A Rebel’s Guide to Walter Rodney from the publisher, Bookmarks, click here.