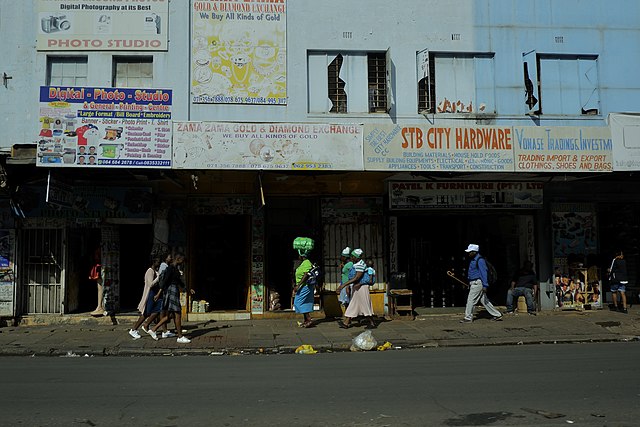 Many commentators argue that South Africa has not changed fundamentally since apartheid, and that racial inequality has continued because the basic structures of the old system have remained untransformed. Owen Crankshaw challenges these views and argues that the labour market in Gauteng, South Africa’s largest province, has been dramatically restructured.

Many scholars and commentators hold the view that South African cities have not changed substantially since the end of apartheid. They argue that racial inequality has persisted because the basic structures of apartheid have not been dismantled. Some even go so far as to say that racial inequality persists because of continuing racial discrimination and oppression by white people.

My research on employment trends in Gauteng over the period 1970 to 2011 has produced evidence that challenges this view in several ways. First, the results show that the labour market in Gauteng has not remained the same since the end of apartheid. On the contrary, it was dramatically restructured, producing new winners and new losers in ways that substantially undermined the old apartheid order.

In 1970, unemployment was very low, and most workers were employed in manual jobs, either as unskilled labourers or as machine operators and assembly-line workers. Forty years later, unemployment was extremely high, and most workers were employed in non-manual jobs, as clerks, sales and service workers, technicians, professionals and managers. This changing labour market, which benefitted better-educated workers and severely disadvantaged poorly-educated manual workers, also substantially changed the pattern of racial inequality.

The same trend took place in middle-income non-manual clerical, services and sales occupations. These non-manual occupations grew more than other occupational groups, resulting in dramatic upward occupational mobility among better-educated black workers. By contrast, there was very little employment growth in manual jobs, in which mostly poorly-educated black workers were employed. In particular, there was almost no employment growth among middle-income machine operators and assemblers, which dealt a terrible blow to the gains made by the unionised black working class.

The result was therefore upward occupational mobility for many black workers into non-manual jobs. Although by 2011 white workers were still over-represented in high-income middle-class jobs, the black middle class was much larger than the white middle class. As far as clerical, sales and services jobs are concerned, the number of black workers had grown to the extent that white workers were no longer over-represented in these jobs.

1. De-industrialization and the changing occupational and earnings structure of employment 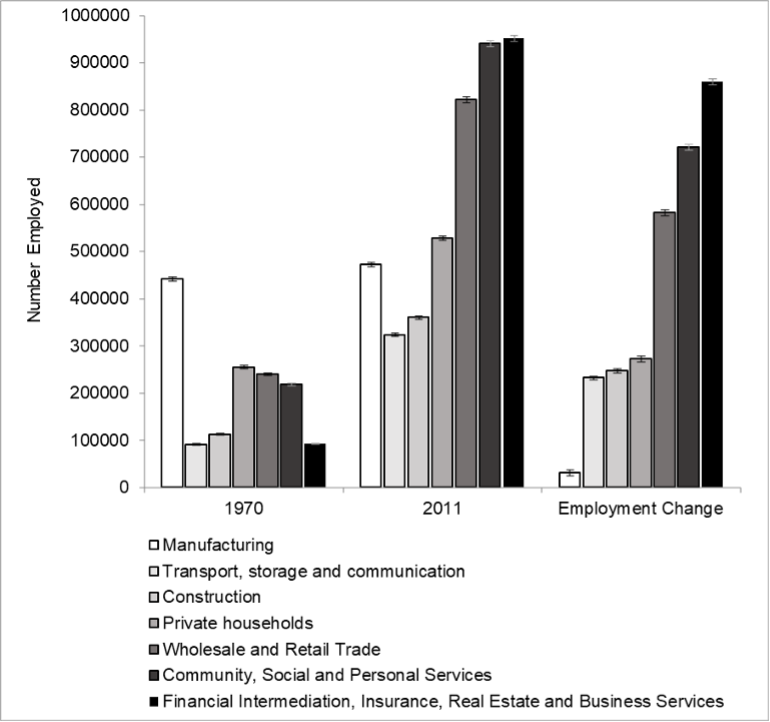 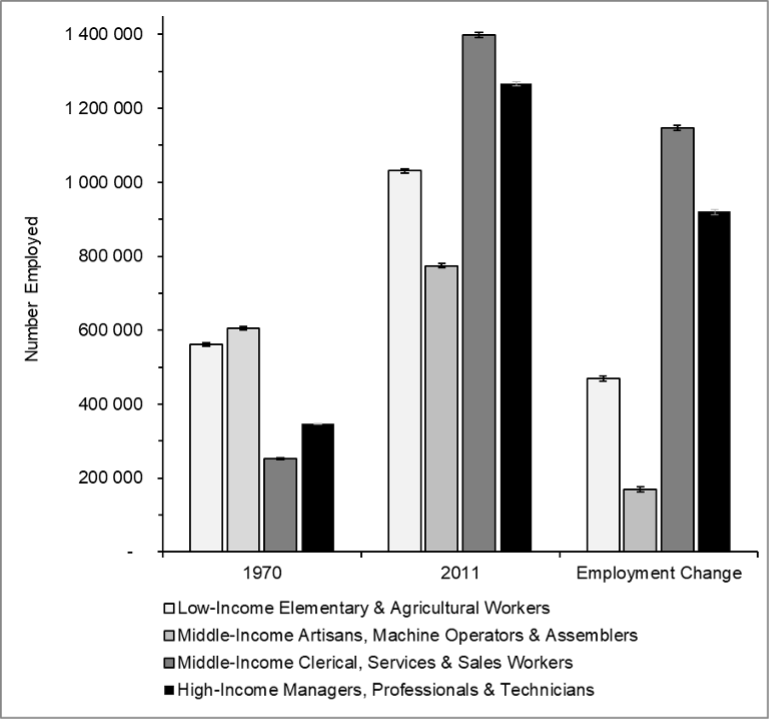 This changing occupational structure of employment was therefore a partial cause of rising unemployment. The reason for this is that about 60 per cent of unemployed workers did not complete their secondary schooling and about 60 per cent of employed workers had completed their secondary or tertiary education. Over the period from 1980 to 2011, which is the period when the unemployment rate increased, two-thirds of all employment growth among workers with at least a completed secondary school education took place in middle- and high-income non-manual jobs.

2. The changing pattern of racial inequality

Although the occupational profile of white workers remained largely unchanged, the occupational profile of black workers changed substantially over the period from 1970 to 2011. In 1970, almost all black workers were employed in low-income and middle-income manual jobs. By 2011, this percentage had decreased to just less than 50 per cent. The remaining black workers were employed in high-income middle-class and middle-income non-manual occupations. This transformation resulted in the racial desegregation of employment in middle-class and clerical, sales and service occupations that were once predominantly filled by white workers. In 1970, at the height of the apartheid period, about 90 per cent of all high-income middle-class jobs were held by white workers. Forty years later, this percentage was reduced to only one-third (Figure 3). Similarly, the percentage of black workers in clerical, sales and service jobs increased from 50 per cent in 1970 to almost 80 per cent in 2011. 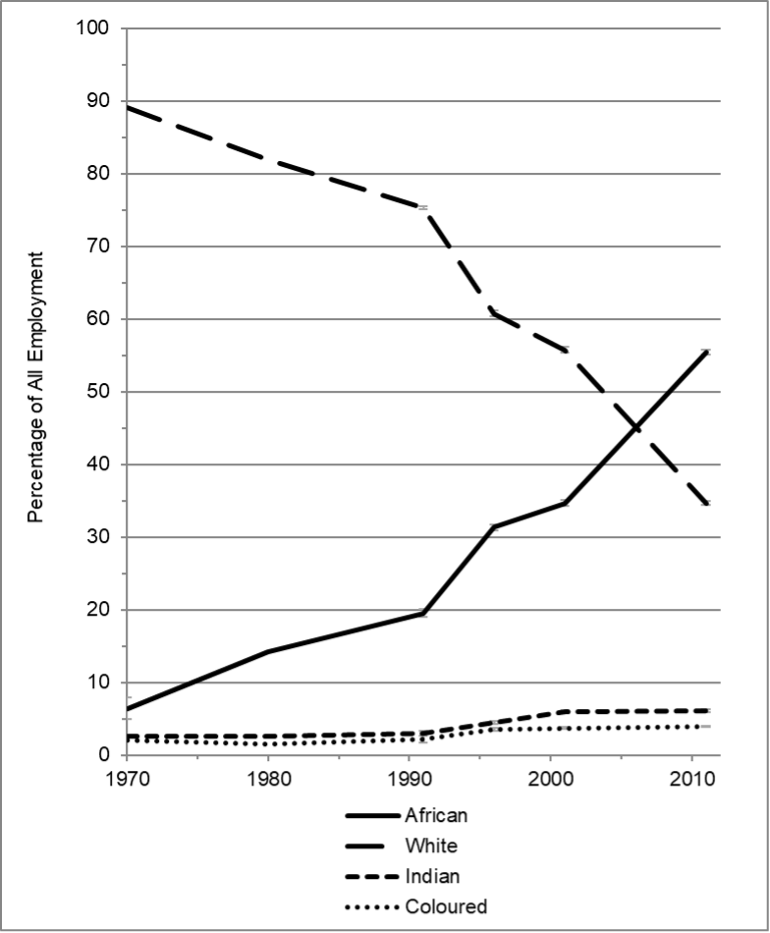 So, contrary to the argument that the old apartheid labour market has persisted, the evidence suggests that there were dramatic changes that have produced new kinds of earnings inequalities. First, the demand for labour shifted away from poorly-educated manual workers to better-educated non-manual workers. In the face of a small and slow-growing white workforce, this resulted in the dramatic increase in the numbers of black workers employed in high-earning middle-class jobs and in middle-income non-manual jobs. Second, the rise of unemployment resulted in widespread poverty among poorly-educated black (mostly African) workers.

Both these features of the labour market did not exist at the height of the apartheid period and therefore cannot be the result of the persistence of the racially oppressive apartheid system. South Africa therefore needs to urgently apply new solutions to these new causes of inequality. Specifically, the country must fix its secondary school system and expand its universities. South Africa must also encourage labour-intensive job creation in all sectors to reduce unemployment.

Owen Crankshaw teaches sociology at the University of Cape Town. He has written and researched widely on labour, labour markets, class and cities in South Africa.