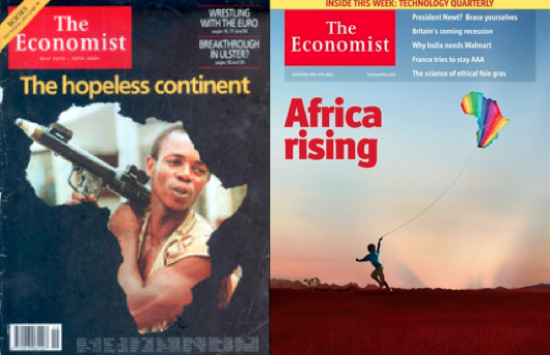 In a debate on radical political economy, economics and economists working on Africa, Franklin Obeng-Odoom and Morten Jerven look at the use of statistics, mainstream economics, power, imperialism, patriarchy, and structural inequality. Both think that mainstream economists get much wrong about Africa, but they differ considerably in their diagnosis of the problem and the way forward. 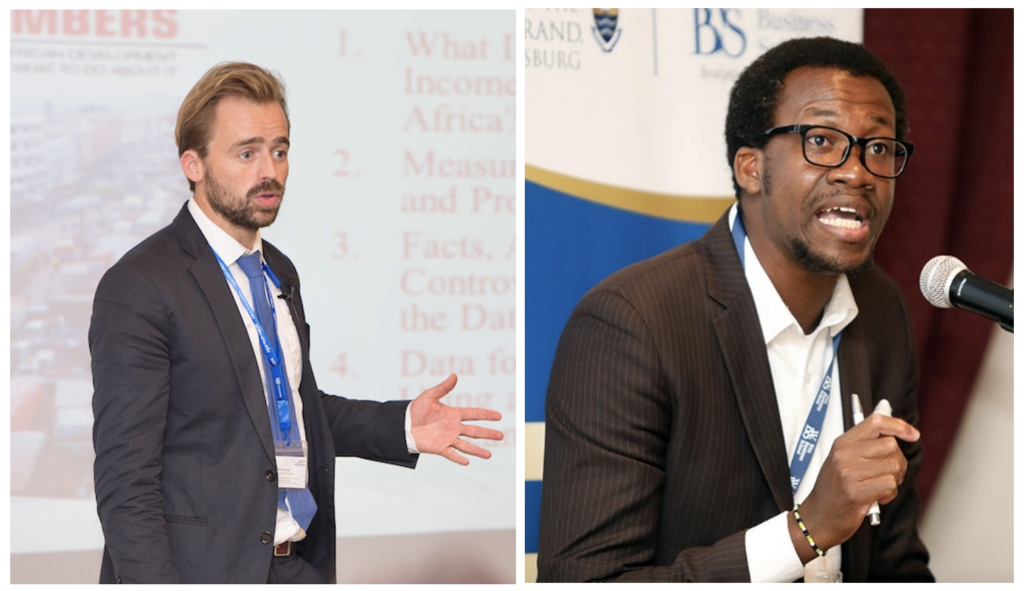 On 3 December 2021, the University of Bayreuth hosted an Event Called “Africa: Why Economists get it (Really) Wrong”. This was our last instalment of a series of interventions organized by Stefan Ouma and Christine Vogt-William to make visible other ways of thinking about the economy beyond Western economic orthodoxies, centring radical African and African Diaspora scholars’ perspective. The event was staged as a debate between the Ghanaian political economist Franklin Obeng-Odoom,  and Morten Jerven. It was moderated by Abena D. Oduro and Stefan Ouma. 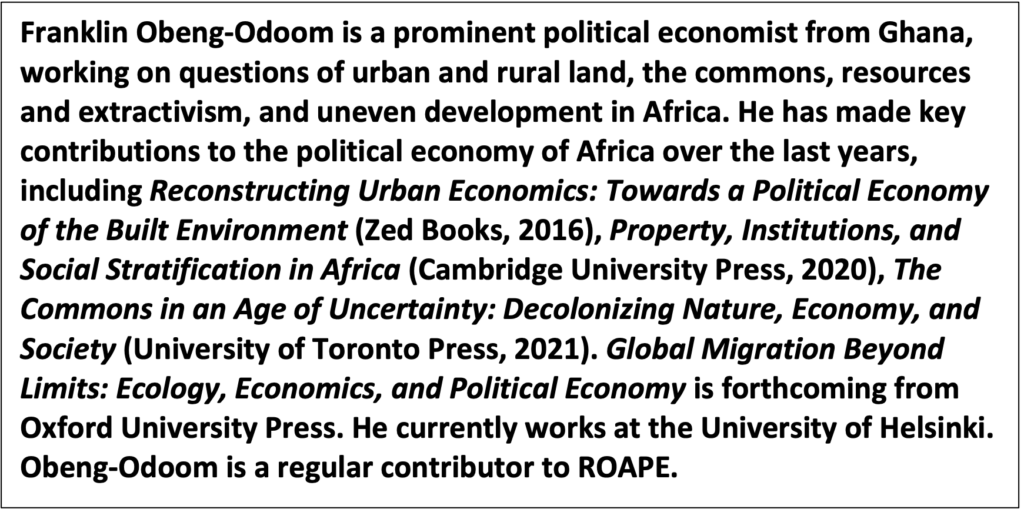 Why did we choose this title for our event? Obviously, it is a reference to the title of Morten Jerven’s widely read 2015 book, Africa: Why Economists Get it Wrong. On the other hand, Franklin Obeng-Odoom devotes substantial attention in Property, Institutions and Social Stratification in Africa (2020) to Jerven’s book, as well as his previous book Poor Numbers (Jerven 2013). Few other authors get so much space in Obeng-Odoom’s book. On the one hand, Obeng-Odoom shows a clear appreciation of Jerven’s work for scrutinizing mainstream economic models and the use of statistics when it comes to explain growth patterns of African economies in historical and comparative perspective, but he also offers a strong critique of it.

As organizers, we think a fresh take on the original title of Jerven’s 2015 book helps us open up a few things to debate: What is the purpose of the category of “Africa” in our study of African economies? Is it a vehicle for Pan-Africanism and Black Empowerment? Is it a geographical space in which we do research? Is it a statistical unit? What do we understand by economics? Do “All economists” really get “Africa Wrong”?

Certainly, what we understand by economics varies widely, and we believe that political economists such as Franklin Obeng-Odoom would not see the need to be included in Jerven’s group of “economists”. On the contrary. He would strongly refuse to be included in this group and passionately writes against the “mainstream” that Jerven centres in his work as a target of criticism. Lastly, what does “really” stand for? Both Jerven and Obeng-Odoom think that mainstream economists get much wrong about Africa, but they differ significantly in their diagnosis of the problem and their suggested way forward.

Obeng-Odoom’s book makes a number of claims with respect to Jerven’s analysis. On page 30 of his book, Obeng-Odoom criticizes Jerven for promoting “… an idealist and technocratic epistemology that neglects materialist and historical concerns”. In other words, he accuses Jerven of neglecting GDP’s political character, but also its redistributive and ecological dimensions.  On page 31, Obeng-Odoom argues that, building on the nomenclature of Pierre Bourdieu, Jerven’s book shows “…an unwillingness to extend his analysis from the doxy (orthodoxy of neoclassical economics and the so-called heterodoxy of new institutional economics) to the doxa (real world political economy)…” A third claim made on page 32 is that “… Jerven had much work on which to build. Yet he made a conscious choice that leads to the view that the growth problem is technical in nature. Questions of power, imperialism, patriarchy, and racism, even Eurocentrism, are missing in the book…. Not surprisingly, Jerven’s reading list is seriously wanting in the political economy research in Africa”.

These provocative claims led us to centre three questions for the debate between our discussants. What does a focus on “Poor Numbers” add to the debate on the malaise of Africa-focused economics and what are its limits? What indicators should those interested in the political economy of Africa use to make sense of economic realities and for steering social change? On which archive(s) of economic knowledge do we rely on when addressing these questions?

However, the question of “really” is also a political question: what kind of knowledge do we build on to carve out more humane, equal and sustainable economic futures on the African continent? Can it be about a “marketplace of ideas”, or do certain ideas and approaches that do not serve these goals, need to be discounted altogether?

For our event, we had hoped for deep engagement, not “gladiatory scholarship” (see Ndlovu-Gatsheni 2021), as happens so often when radical scholars from the Global South and Western scholars meet. Reflexivity, relationality and multiplicity matter, and thus we placed the principles at the centre of our conversation.

Jerven started by introducing the main arguments made in his 2015 book, reiterating that he was making a case against the multi-country regression analyses of mainstream growth economists, who often arrive at overall pessimistic or optimistic assessments of growth trajectories on the continent because they miss the larger historical picture and specific country contexts. Jerven emphasized that both his 2013 and 2015 book were conceived as challenging the mainstream from within, via the methodologies, units of analyses and language of the mainstream, done by somebody who is white, male and based in the Global North, and who knows the discipline from within.

Aware of its shortcomings, Jerven underlined that this was the contribution he could make, working with the mainstream but challenging it at the same time. He acknowledged that both of his books feature too little of African critical political economy literature (as criticized by Obeng-Odoom), and through the engagement with Obeng-Odoom’s book, he hoped for a more rounded work in the future. However, he was keen to emphasize that his work offered both a political and a conceptual critique of GDP. “GDP as a measure of growth is flawed everywhere all the time”. There was always “politics in GDP”, an emphasis meant to reject some of the strong criticism towards Jerven’s own work in Obeng-Odoom’s critique. Jerven admitted that the 2015 book was clearer on this than the 2013 one, so it may also be a question of which book one reads first.

In his response, Obeng-Odoom underlined that his critique of Jerven’s work was embedded into his larger attempt to rethink “development economics”. He met Jerven “on the way” in developing his critique, and he took useful insights from Jerven’s carefully conducted research on the historical patterns of growth in Africa, and the often-flawed growth models of mainstream economics.

However, Obeng-Odoom is equally critical of the ‘Western left consensus’ and he centres his critique of economics in the traditions of Black radical economic thought. His critique is not meant to please or engage with mainstream economics on their own territory (as Jerven strived for), but to offer a radically different take on economy and society in Africa. Land, rent, cities, inequality and social stratification, shaped by the lasting effects of colonially established and often deeply racialized social and material relations, are at the center of his approach.

The focus on poor numbers, as espoused in Jerven’s two books, surely adds something to the debate on why mainstream economics has an “Africa problem”, and can be approached at the level of description (what is data), analysis (what models are based on that data), and prescription (what political advice is given based on such models). For Obeng-Odoom, Jerven’s work is useful in problematising these different stages of mainstream economics’ work. But he advocates for moving beyond this: What do GDP numbers say and don’t say? What are the assumptions on which these numbers are based and on what are they focusing attention, even when subjected to critique?

A strong concern by Obeng-Odoom was that even a more sceptical take on GDP still places it at the centre of development debates and risks eclipsing the more institutional forces, including colonialism, that have shaped the uneven nature of economic development in Africa.

Jerven, however, was keen to clarify that he thinks GDP was “a mirror of ourselves” and highly Eurocentric, a point he also makes in his books. This brought him to a few other clarifications. First, his 2013 book was misunderstood as an economic-cum-statistical version of Joseph Conrad’s “Heart of Darkness”, and thus many statistical bodies on the continent saw it as a critique of their work rather than a critique of mainstream economists’ work.

Obeng-Odoom, on the other hand, argued that if global stratification was not the focus or a key pillar in a body of work, the criticism as the one levelled against Jerven’s work could more easily arise, as Africa then appears to be ‘exceptional’. He acknowledged that during the discussion, some of these important points were pinned down more clearly by Jerven, but they deserved greater scrutiny in his books in order to not read his account as one of “economic othering”.

Indeed, the GDP focus in Jerven’s work, also captured by one of his book titles (“Poor Numbers”), creates the impression that GDP-based growth statistics is an African problem, even though Jerven acknowledged otherwise during the debate. Obeng-Odoom eventually wanted to move the discussion onto development in Africa beyond mainstream territories, which cannot happen unless we study Africa by bringing in broader questions of long-term inequality and injustice.

Both Jerven and Obeng-Odoom embraced alternative measures of wellbeing and social progress. Jerven, however, argued that often critiques and propositions for alternatives “only tell, but don’t show”. As such, he put the case for more methodological rigour when it comes to engaging with conventional economics metrics and their alternatives. Also, the world of indicators is a tricky thing. Many alternative measures would require greater statistical scrutiny, which in itself is a political issue.

Lastly, the question about knowledge archives came up. Obviously, Jerven, as an economic historian, uses multiple sources, including colonial archives to make sense of social and economic phenomena. In a reflective manner, he admitted that he sided with mainstream economic units of analyses to challenge the discipline from within. While he wholeheartedly agrees with Obeng-Odoom’s concern to centre inequality, materialist readings of political economy and stratification more centrally in the writing about African economies, he eventually took a different path. He ended by emphasizing that this was not the end of the road. Obeng-Odoom thought the theses in Poor Numbers could be generalized to the Global North, while Jerven noted that there is much to learn from Property, Institutions, and Social Stratification in Africa. The debate continues.

Abena Daagye Oduro is an Associate Professor in the Department of Economics, University of Ghana. Her main areas of research are poverty and inequality analysis, gender and assets, unpaid care work, international trade policy and WTO issues.

Stefan Ouma is a Professor of Economic Geography at the University of Bayreuth, Germany. He has published widely on global commodity chains, agrarian change, the financialization of food and agriculture, and African political economy. He has been a recurrent contributor to roape.net.