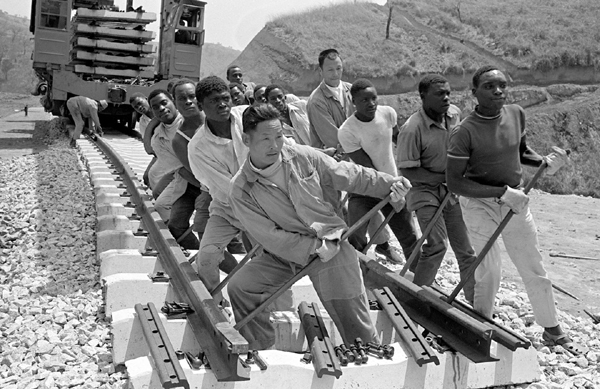 The relationship between Africa and China hinges on the question of cooperation and development. Kristin Plys, Amenophis Lô and Abdulhamid Mohamed ask if we should celebrate this relationship as the South-South development that the Global South dreamed of in the mid-20th century, or are contemporary Africa-China relations a new imperialist dynamic?

Author and activist, Vijay Prashad elucidates in The Darker Nations, the ‘Third World’ is not a place, but a political project. In the mid-twentieth century, at the height of US hegemony, the Global South imagined political, economic, and social emancipation. One important incarnation of this was the Bandung Conference in 1955 where representatives of 29 newly independent Asian and African states met to promote what is now termed, South-South cooperation, in other words, the idea that African and Asian states could come together for economic and cultural cooperation and together oppose colonialism and imperialism.

Bandung was eventually institutionalized in the Non-Aligned movement, a forum that opposed US and Soviet intervention in the Global South. Non-alignment was not without its critics, however. Muammar Qaddafi of the non-aligned movement said, “The world is made up of two camps: the liberation camp and the imperialist one. There is no place for those who are non-aligned. We are not neutral and totally aligned against the aggressor… Long live the liberated. Down with imperialism.” As he saw it, the Global South was not comprised of states who were beholden to US imperialism, states who were beholden to Soviet imperialism and states that opposed either influence. For Qaddafi, there were only those states who are against imperialism and for liberation and those states that are imperialist.

Our understandings of contemporary imperialism, however, are shaped by the lived experiences of US hegemony and the particular way in which it supplanted European colonial rule with new dependent relationships of exploitation of the same character but through new forms of politico-economic relationships between the United States and the Global South. But with the crisis of US hegemony starting in the 1970s, and now with a more pronounced global crisis since 2008, of, perhaps, the capitalist world-system itself, imperialism as we know it will also necessarily change. Forms of power and hierarchy need to be remade so that they can continue as they lose moral authority.

The United States has lost its moral authority for global rule providing openings for a new hegemonic power to emerge and lead the world-economy in overcoming the current crisis. For example, in the transition from British hegemony in the 19th century to US hegemony in the 20th, imperialism persisted, but the form it took changed. Formal colonialism lost its moral authority leading to the important development of flag independence across much of the Global South. But in the absence of formal political rule through colonialism, the United States innovated new articulations of imperialism during the Cold War and beyond.

Any new hegemon, as part of its rule, must convince the rest of the world that it is acting in the best interests of the inter-state system. Part of the establishment of that consent to rule entails forming dependent relationships with the Global South that appear to be in the best interests of the Global South. With the rise of a new world-hegemon, imperialism must necessarily be remade to look like aid, cooperation, and solidarity. This helps the rising hegemon establish a global moral authority as it appears to be acting in the moral interests of the entire world economy. In these phases of world-history where a new hegemon is on the rise, it is critically important that we distinguish true South-South cooperation that has the potential for national liberation from a new incarnation of imperialism in its guise.

When we examine this distinction between South-South cooperation and contemporary imperialism on the ground, it is essential to examine the local political conditions that create an imbalance of power. Therefore, we must better understand the contemporary dynamics of African sovereignty.

While the 21st century began with revolutions to oust decades of postcolonial authoritarian rule in Egypt, Tunisia, Sudan, and elsewhere, these efforts were short lived. Counter-revolutionary forces, particularly those led by right-wing nationalists and conservative religious leaders too often became the eventual beneficiaries of toppled authoritarian regimes. In recent years we have witnessed more counter-revolutions and coups across the continent, in Chad, for example. States succumbing to authoritarianism have become more prevalent and we seldom observe revolutions that have been successful at installing long lasting democratic states committed to promoting the interests of African people.

In this fraught context of authoritarian rule across the continent, it has been easier for imperialists to usurp African sovereignty. Just as European and North American states have found authoritarian rule in Africa more amenable to their politico-economic interests so too has the Chinese Communist Party. In Zambia, copper mining accounts for 65% of the country’s export earnings. Most of the mines are owned by the Chinese state, though a few are mining companies with headquarters in Canada. Foreign mining companies have been able to create pockets of Chinese state sovereignty within Zambia where labour laws are notoriously lax, wages low, accidents and deaths of workers, prevalent. When workers have combined and protested these conditions, they have been met with violence, not from the Zambian state, but from Chinese management who has met workers’ demands by deploying violence without consequence. In 2010, a manager at the Collum Mine shot and killed 13 workers who organised against poor safety standards.

The Lamu Project to build a deep-water port connecting East Africa to Asian export markets is another example of loss of sovereignty. Initially, the Lamu port was to be funded jointly by the Kenyan, Ethiopian and South Sudanese states but because of funding issues and occasional attacks on port construction by Al-Shabaab, Kenyan Defense Forces sought loans from China which were supported through the ‘Maritime Silk Road’ programme, a policy to not only aid China in gaining further access to African resources and markets but also enable the Peoples Liberation Army Navy to establish a counter-terrorism base in Northern Kenya. Ports are crucial to African development as 90% of East African exporters depend on seaports to remain viable, but if Kenya defaults on the debt they have incurred, which seems likely, the Lamu port will soon become yet another space of Chinese state sovereignty in sub-Saharan Africa.

Land grabbing through creating pockets of Chinese state sovereignty and through control of strategic assets has helped China obtain cheap natural resources needed for industrial production, while railroads, other infrastructure, along with access to seaports allows for the extraction of these resources from Africa. Regime change has not been successful in disrupting this dynamic because the movements for regime change have mostly focused on ousting political leaders, but as a result of European and North American imperialism and also through the support of the domestic bourgeoisie, sovereignty in most African states rests with the military. Recent revolutions have done little to disrupt that dynamic or to create states that will serve the interests of its people.

Return to a Pan-African internationalism

There is a difference between globalization done on the terms of more powerful states, and a horizontal internationalism based on solidarity. Africa-China relations in and of themselves could bring great benefit to both regions, but as long as there remains a power differential in African states’ individual dealings with China, it will remain a tie that will ultimately result in economic benefit for China and the exploitation of Africa. One possible solution could be to have negotiations around Chinese development projects in African states done as a regional bloc through a Pan-African union rather than country-by-country.

But beyond this, what we, as an internationalist left can do is decentre the role of the state in Africa-China relations. If civil society and leftist groups in both China and across the African continent could work together across borders it could put pressure on states to realise common social injustices in both China and various African contexts such as the importance of opposing authoritarian regimes that fail to serve the best interests of the people and promoting workers’ rights through a labour internationalism. We can also envision linkages between other Chinese and Pan-African civil society organizations around issues common to the African and Chinese contexts.

Frantz Fanon famously described the ‘Third World project’, as a rejection of the goal of ‘catching up’ to Europe and North America, and instead, saw as its primary goal to innovate a new way of thinking. Fanon believed in the creativity of revolutionary Pan-Africanism and the Global South, that new forms of politics could be envisioned and enacted that would provide solutions to the longstanding social problems.

There’s a tendency within the Global North left to see any political development that opposes Western dominance as something to celebrate. But in thinking through the complexity of contemporary Africa-China relations it is evident that we need to be more discerning about the dynamics of power involved in movements that may claim to be South-South cooperation and/or anti-Western. They may yet be an embodiment of the unequal power dynamics and politico-economic exploitation we stand firmly against.

Propaganda, both from the West, and from China, obscures the power dynamics at play on the ground in Sino-African relations. The ability of propaganda to muddy our understanding of the dynamics at play makes organizing around these issues particularly difficult and controversial. But we need to remember, as Pan-Africanists based in Canada or anywhere else for that matter, that just because something is anti-West doesn’t make it liberatory. We need to be thoughtful and discerning in how we think about power and history in our contemporary context.

The central issue facing us going forward with this conversation is how we can pay closer attention to the dynamics of power in politico-economic relations between states without falling into the Sinophobic tropes of most Western states, but also recognising that there is not an equal and symbiotic relationship between African states and Chinese developmentalism.

Perhaps the first step is, instead of celebrating the ties between an authoritarian Chinese state and non-democratic regimes across Africa, we should instead think creatively about what we can do to build more liberatory South-South cooperation between civil society and left movements in Africa and China. Through these common goals of fighting shared social struggles, a truly horizontal Afro-Asian solidarity can be envisioned and enacted.

The authors are members of GRILA-Toronto (Group for Research and Initiative for the Liberation of Africa).

Featured Photograph: Chinese and African labourers work at the construction site of the TAZARA railway in the 1970s, about 15,000 Chinese workers were sent to help build the railway, which linked Dar es Salaam, Tanzania, to central Zambia (China Daily, March 26, 2013).