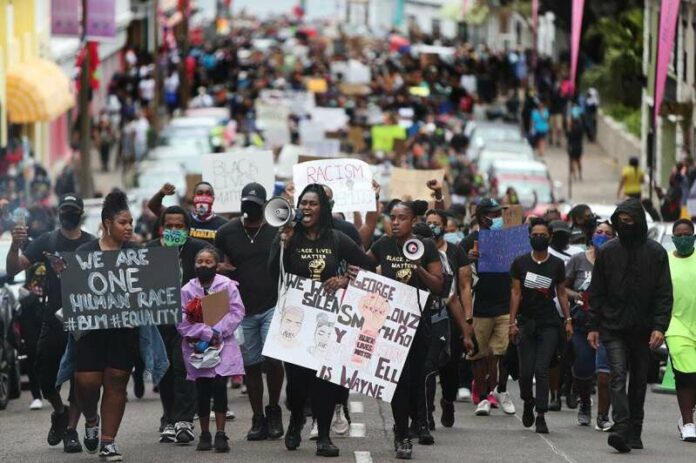 The Black Lives Matter movement will be recorded in history as one of the most explosive recent political events. Hundreds of thousands of people across the world have been on the streets, angry, radicalised and protesting to achieve change. Elizabeth Adofo writes how the movement has resonated in every part of the world and its reverberations were felt in Bermuda – a tiny island in the middle of the Atlantic.

A year after it held its Black Lives Matter (BLM) protest in June 2020, Bermuda appears to be consumed by its relentless battle against new strains of the Coronavirus and its problems of rising unemployment. On the surface, it is hard to see any traces of that radical period of racial justice on the island. There is also a longstanding tradition shared amongst Bermudians of upholding a sense of political politeness and avoiding controversy, which partly explains the lack of discussions about racism within Bermuda. But when one delves in deeper it becomes clear that the BLM movement touched many souls, and people have begun to question and criticise this custom of not talking about racial inequality in hope of encouraging racial harmony.

Yet BLM left an impression on the island that goes beyond the few art murals that were put up throughout the island. It’s only when you engage in conversations can you get a real sense of how people want to continue the fight for racial inequality, especially amongst the youth of the island. The important question to ask then becomes why hasn’t there been a bigger change on the island since the protests? To answer that we must examine the protests that took place, which became the biggest Bermuda has seen in several decades and what they mean for Bermuda’s long history of racial injustice.

A brief history of race in Bermuda

Bermuda is located roughly 600 miles from the east coast of mainland North America and is home to approximately 65,000 people. It is one of seven British Overseas Territories officially becoming a British colony in 1707 after being claimed by European settlers as early as 1612. Today, the island is culturally diverse with a population consisting of 55% black Bermudians who can trace their lineage directly to Africa and the Caribbean, 33% white mainly of Portuguese heritage, and the rest are of other descent including Asians and indigenous Americans ­– who were previously bought as slaves from the Americas. It is widely accepted amongst many historians that the island does not have a native population as there is currently no record of the island being inhabited before it was discovered in the 17th century. This entails that black Bermudians are descendants’ slaves and indentured servants whom the British empire had bought from West Africa and, to a lesser extent, other colonies in New World. Bermuda was thus founded on racial inequality, slavery, exploitation at the hands of British imperialism.

Slave revolts were few as the 21-mile island held the smallest population of slaves compared to the other Caribbean colonies. Rebellions and uprising were crushed quickly, punished swiftly, and were largely unsuccessful. Slavery was the starting point upon which a tense history of race relations unfolded. Many Historians have largely ignored these racial divisions by depicting black and white people as living in harmony on the island throughout its history.

Quite the opposite is true, Bermuda has a long history of laws and policies that have ensured segregation amongst its black and white populations. For most of its 400 years history, the country has been subjected to segregation. After slavery was officially abolished in the British colonies, black Bermudians were forced to become dependents of their slave owners and continued to carry out work on their land, essentially slavery by another name.

This harsh exploitation continued but as Bermuda’s economy diversified black Bermudians managed to work their way out and find new crafts and trades. Yet, they lived in a segregated society where the black people were banned from employment in many sectors such as in the civil service and the post office, and many other administrative jobs. Only recently in the country’s history was segregation ended, in the summer of 1959 after 17 days of boycotts and demonstrations at movie theatres in protest over racially segregated seating practices.

Currently, Bermuda holds the fourth-highest income per capita in the world with tourism and the financial industry being its two main sources of revenue. Despite the large amount of wealth that is  opulently displayed on the island in mansions, superyachts, and designer label shops there is a huge racial wealth gap on the island. Bermuda very much has a racism problem.

Although racism in contemporary Bermuda has not yet produced the same scale of violence against black people as America, it is nonetheless real and omnipresent. White Bermudians and (non-Bermudians of the ex-pat community who make up a large proportion of the population) disproportionately earn higher incomes than black Bermudians. Most of their children will attend privately funded schools while most black students attend public schools. Statically these children will also more likely be university educated and have more access to the higher-paying business sectors jobs on the island.

Being a young black person in Bermuda will put you at a much greater risk of arrest, prosecution, and incarceration than your white counterparts. Between the years 2009 to 2011, 30,725 reported instances of stop and search were performed by the Bermuda police force. Almost exclusively these had been carried out on black Bermudians ranging in ages from 16-36. This ties in seamlessly to the prison system in which 97% of inmates are black Bermudian despite being just 55% of the population.

With an almost entirely black-employed police force and judicial system, Bermuda is a clear example of why policies, such as ‘more black faces in higher places’ do not help reduce racial profiling. It exposes our systems to what the police truly is: corrupt and unaccountable. These statics also paint an important picture of the current racial climate in Bermuda and why BLM was an important catalyst for addressing these issues for Bermuda.

At first, it seems that it would be easy for someone to become blind to these inequalities when living on an island that mirrors paradise with its clear blue seas and pink sand. Global issues appear as distant phenomena when viewed from Bermuda, which has just one local news channel and only three newspapers – two of which are workplace publications. Yet young, old, black and white sprang into action almost immediately following the murder of George Floyd in 2020, and inspiration of the many protests taking part in the US. Bermuda in total had three large-scale protests in June 2020 with reports of one protest having 7000 people. These reported numbers meant that almost 11% of the entire population took part in the demonstrations making them the largest protest movement in the country’s history.

There was also an island-wide outrage and a petition with over 35,000 signatures against the appointment of Lee Rizzuto, – a wealthy heir and conspiracy theorist – as US Consul General of Bermuda by Donald Trump. The first lines of petitions summed up the feeling of many Bermudians:

Bermuda is a small 21 square mile rock in the middle of the Atlantic. Often, we watch the world, especially our closest neighbour America — 800 miles away, and stay silent, lest we upset the perceived superpowers and the business stops coming. But today we stand with Black people from across the diaspora who are rising to fight injustice, police brutality, and white supremacy.

These protests organized by youth groups BLM Bermuda and Social Justice Bermuda lead by  two young black women who gave the community confidence that it could organise large-scale mobilisations in Bermuda despite not having done so for decades. Social media and the limited number of news channels helped to quickly spread the word about the protest as thousands descended into the capital city of Hamilton. Unfortunately, the lack of previous mass movements and limited space for political activity amongst the working class has meant that much of that great BLM mobilization has yet to generate an organisation working for change.

This is not to say that no change has been accomplished. Several non-profit and grassroots organizations have been created by ordinary people in the hope of tackling some of these issues, such as Citizens Uprooting Racism in Bermuda (CURB), they do important community work with honest intentions of fighting racism. Many of the corporations on the island have also responded to protests by introducing racial bias training and announced commitments to racial equality, but unsurprisingly these are mainly empty box-ticking exercises that companies introduce to give the false appearance of change. In addition, BLM has even created a huge amount of pressure on the Bermuda police force to be held accountable for its acts of racism. Last summer, the police force suspended one officer who made disparaging remarks about the protest and other inappropriate messages on social media – he later resigned from the police.

The legacy of Black Lives Matter

What people want is a completely different attitude to how race is seen in the country and to end the custom of ignoring racial injustices. Speaking to young people on the island, I witnessed a strong sense that there was an eagerness to have some sort of political activity on the island. This goes beyond just fighting racism to include other issues, such as climate activism and the fight for LGBTQ+ rights and inclusion. To accomplish this change will not be an easy process. Empowering the working class of the island will require real action and time. With the presence of strong trade unions who regularly engage in strike action against the bosses and a legacy of fighting back against racism, Bermuda does have potential to develop further powerful mass movement from below.

Ordinary people of Bermuda have long been ignored by the various governments, side-lined by the interest of the wealthy. They are angry and willing to fight for a better Bermuda. However, there is a uphill battle for the country as it currently stands as a tax haven for business and a millionaires’ playpen. Abolishing racism will require the active involvement of the 99 in a broad anti-racist movement. But the anti-racist struggle must crucially be based on the activities of the small but combative working class, which has the power to bring the economy to a halt and bring a crucial anti-capitalist element of the fight against racism.

The very real concerns facing the black population on the island, which have only been made worse through covid, will have to be addressed. The political debate on antiracism needs to go beyond mere calls for black-owned business and capital and most importantly, young people will once again have to be at the forefront of these movements and be allowed space to take active roles. Their energy, radicalness, and in-depth understanding of the situation on the island needs to intersect with other social justices issues that are key to the success of a truly transformative Black Lives Matter movement.

Elizabeth Adofo is a revolutionary socialist activist from London who is based in Bermuda. As a former teacher, she enjoys giving talks about inequality in the British education system and participates in campaigns against racism and police brutality.