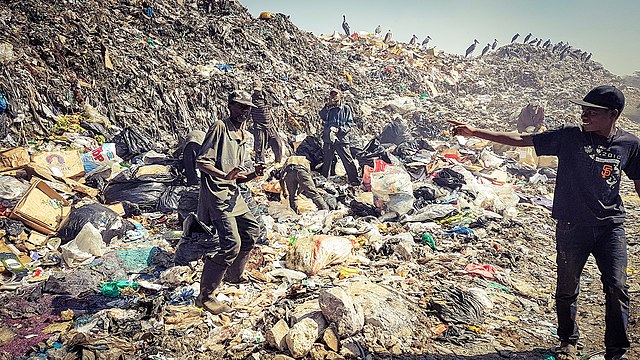 ROAPE interviews the Kenya environmental activist and socialist, Irene Asuwa. She talks about the struggle for climate justice, and social and economic change. Introducing a short film on a major dumpsite in Nairobi, Lena Anyuolo explains the environmental waste and devastation caused by multinationals, facilitated by the Kenyan government.

Could you please tell roape.net readers a little about yourself, your background and activism?

Irene Asuwa: I co-convene Ecological Justice. A collective of community groups reclaiming, rehabilitating and transforming green spaces. I have been actively involved in amplifying community voices in climate justice online and offline for a while. I support outreach at Ukombozi library, a progressive library that supports organizers and communities in doing political outreach activities through dialogues, films, art and study sessions. I am also a member of Revolutionary Socialist League an organization that is organizing towards a socialist revolution.

If I can turn briefly now to you Lena, you have been involved in a short film on the Dandora dump and anti-capitalism in Kenya, can you explain your involvement in this film and the purpose of it?

Lena Anyuolo: The film was part of a series called Capitalism in my city. Capitalism in my city is collection of articles and videos about the reality of living the crisis of capitalism in informal settlements. It is not told in an academic tone as most analysis do. Rather to make it accessible, we wrote about our experiences as we live them. The dumpsite is a great injustice to our community as you can see in the film that the waste that affects us isn’t generated by us. The dumpsite affects us by causing health issues such as respiratory infections and cancers due to the toxic effluents that come out of it.

On Saturdays, when the trucks line up to deposit the waste from upper class neighborhoods, the stench and traffic leading to the site is unbearable. We are structurally neglected and denied social justice rights such as healthcare. There is only one level 5 hospital to serve the whole of Embakasi. Dandora is a large neighbourhood, requiring such amenities especially as we are subject to terrible living conditions.

In the film, we wanted to show how we live to rouse ourselves into action because we are not condemned to hopelessness. That is why in the film, and in the first video on the ecological crisis by Brian Mathenge, we are keen on reminding ourselves that no effort is too small. A better world is possible through constant study, praxis and solidarity. We shall win. We are angry about our conditions because they are unfair and unjust, and we are using anger constructively to change our conditions through avenues like this film and ecological justice.

The making of this film was not easy. We had limited technical skill. We sought the help of our comrade, Davis Tafari as the director of photography. Through him, we also gained access to the dumpsite – it is an area fraught with violence due to the scarcities created by capitalism. We then sought Susan Mute, a comrade who is part of another ecological organization called Haki na Mazingira, and others from Mathare’s green movement to enrich the discussions.

I was involved overall as co-editor of the Capitalism in my city series.

You are also a member of a Kenyan national grassroots’ Ecological Justice movement – ahead of the COP26 climate talks in the UK, would you explain to us the nature of the groups work and campaign? As a socialist, and a revolutionary, how do you see your intervention in the justice movement?

Irene Asuwa: Ecological Justice is a collective of community ecological groups in Nairobi and parts of Western Kenya. We organize in a number of ways. Much of our work is through political education. It is important that people understand the global economic and political system and the impact it has on the people. The ecological crisis is a direct natural consequence of the global hegemony of capitalism and imperialism. Through the climate triggered emergencies there are glaring crimes of capitalism against nature, and humanity as part of nature. Through study cells and community resource centers the groups have access to progressive literature and films. These help people to connect the environmental apartheid to the general militarization of the country and the region.

We also organize the ‘Young Eco Warriors Collective and Eco Schools’. There are groups that have children who are naturally enthusiastic about ecology. These children are groomed to understand and make interventions to mitigate the immediate impacts of the ecological crisis and grow up as ecologically conscious people. Most children spend a lot of their time in schools. We support them to have green spaces in the schools to help reduce pollution since most of the schools in urban areas are situated in heavily populated areas.

We are equally involved in ‘Art for Liberation’. There are a number of artists in the collective who use art to sensitize people on the importance of protecting the ecosystem through spoken word, graffiti, landscaping, acrobatics and other form of sports to mobilize and educate people.

We are stiving towards having people understand that humans are part of nature. That we have the obligation to change our production and consumption models that have become entirely unsustainable. We want to see the climate justice conversation coming from bottom up and interventions happening from within the communities. We also need to get people to understand the climate crisis can only be resolved by a systemic shift. That products of nature are public goods that should be accessible to everyone. It is our obligation as part of nature to be good custodians of natural resources for future generations.

Broadly speaking, what is the state of the ecological crisis in Kenya and East Africa generally?

Irene Asuwa: The genocide is worsening. People are being further alienated from nature and its projects. We are getting more and more pauperized to the extent that we can barely access very basic necessities like land which is the main means of production, water, food, decent housing and green spaces. There are things that nature provide for free, yet they are being privatized day by day. People use natural things like light and water as a bargaining chip to get people to pay more for bare minimum housing.

There are more punitive agricultural laws and policies being passed, particularly seed laws that are very retrogressive and repressive. These laws criminalize small holder farmers and makes them dependent on corporations. A lot of harmful synthetic fertilizers and pesticides that are carcinogenic and destroy the ecological system are still being dumped in the Kenyan market. Kenya is also considering legalizing GMOs.

There is an attack on green spaces. More parks, riparian land and community open spaces are being seized to put up concrete. There is an obsession of greying the country and the region at the expense of the ecological system. Public green spaces are being militarized through fencing, military and police presence. People are being charged to access them. There are “conservancies” mushrooming and taking up large chunks of community land in the guise of conserving wildlife and taking care of endangered species. As a result, communities have been displaced, evicted and lives have been lost in the conflicts that have escalated in those areas.

Corporations are mining unethically, leaving behind damaged land, death and making children vulnerable thanks to unethical extractive practices. Communities are subjected to the danger of open quarry mines, toxic waste, below survival wages in very inhumane working conditions and health risks that come from working in hazardous mines and factories.

An insatiable appetite for fossil fuel is also sweeping across the region – despite international claims to the contrary. Foreign banks are pouring investments into oil, gas and coal projects, for example, the proposed Lamu Coal Plant, Turkana Oil, East African Pipeline among others. These projects do not make any economic or social sense. As we know, fossil fuel is obsolete, any society that claims it is advanced should and must keep them in the ground.

There have been a series of calamities across the country, so witness the rise of Nam Lolwe, Lake Naivasha and Nakuru which has caused floods. There is a looming drought in Northern Kenya, as well. We are trying to recover from a recent locust invasion and there is a possibility of another wave.

The attack on green spaces is also worsening the state of our mental health as we have limited areas to unwind with the commodification of the environment. The crisis is here, but so also is the struggle against capitalism and its destruction of nature.

Irene Asuwa is a community organizer and the co-conveners of Ecological Justice, a collective of community group championing for climate justice.

Lena Grace Anyuolo is a writer, poet and social justice activist with Mathare Social Justice Centre and Ukombozi Library. Her writing has appeared in a range of publications, including Jalada’s 7th anthology themed After+Life, The Elephant and roape.net.