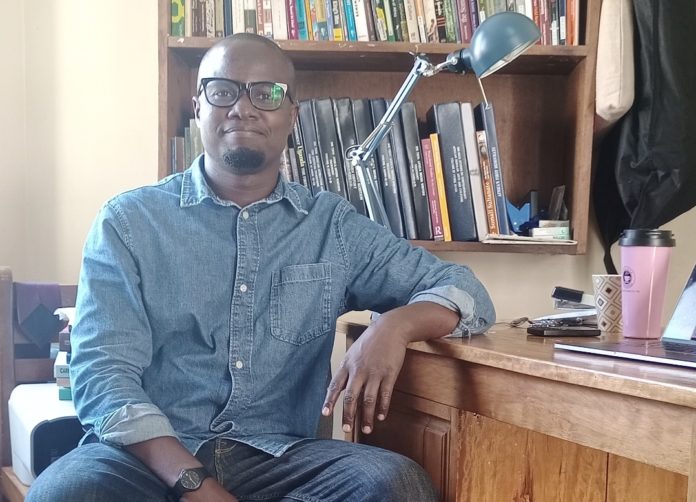 In an interview with Yusuf Serunkuma, ROAPE asks him about his forthcoming book on oil, capitalists, and livelihoods in western Uganda. The book is a co-edited volume with Eria Serwajja and brings together six junior Ugandan scholars and activists.  Serunkuma details the struggles of rural people to confront and harmonise interests with oil explorers, with environmental destruction and compensation that has turned lives upside down

ROAPE: For roape.net readers can you pleased tell us something about your background and work?

Yusuf Serunkuma: I’m a scholar and activist based at Makerere Institute of Social Research (MISR), Makerere University. I’m an anthropologist (eyes on Somalia/Somaliland), who also studied political economy/Agrarian studies. I wrote The Snake Farmers (2015), a play inspired by debates on foreign aid, and endless violent conflict, and media and secondary schools in East Africa found it useful. I write a column in the Ugandan weekly newspaper, The Observer.  I have also written for Pambazuka, roape.net and a host of other publications.

You are publishing a new book on oil and Uganda; can you tell us about the book and how you came to write it?

We focused on the window between discovery and actual extraction, that is, before the pipes begin to flow (exploration, calculations, displacement, resettlement, compensation, waiting, speculation, anxiety, and all related aftermaths), and this is the first book-length publication on the subject that specifically speaks from the vantage of point of the displaced – and develops analyses from these voices without the noise in Kampala.  Focus is given to items such as food, land, compensation itself, the environment, violence that displaced persons suffered, education as schools were closed for years, etc. Our focus is narrow but deep, and we ask questions about the extent of state involvement in the lives of ordinary folks, who tend to be “the first ‘extractions’ from the earth,” but are simply unwanted!  We prioritised the view of uneducated and poor folks (by far the majority in rural areas, even when they received handsome compensation packages), children, rural country women, etc. How do they play in the larger view of things – and how did they end absolute impoverishment?

The experience of Nigeria and the Niger Delta looms large, as do many other resource rich countries on the continent, and the manifest failure to harness wealth in the interests of development and the poor – what some academics have called the ‘resource curse’. What transformations have the arrival of the oil industry in the country prompted? Has it brought an economic boom, as many thousands were led to believe?

From the vantage point of the persons in western Uganda (specifically, Hoima and Buliisa), ever since the discovery – even with the sumptuous compensation packages to some people – it is difficult to point to tangible transformations by the time of our fieldwork. There are new roads in the area, but those have not translated into food and water for the people, nor have they translated into improved livelihoods. Maybe it is too early to tell, but also our fieldwork does not seek to speculate on the future benefits, but the state of affairs as they were then. Afterall, what sort of ‘development’ would hurt people for 15 years before making lives better? Part of our contention is to highlight the plight but also make visible the accumulation of discontent, which could possibly end in the so-called oil curse. The over-accumulation of neoliberal interests in the area is one of the undercurrents of our fieldwork.

Interestingly, and extremely relevant for a publication like ROAPE, you write powerfully about the compensation that was paid to those evicted to make way for the construction of the refinery in Hoima. Please tell us about this process and the impact this has had on communities and people in the affected areas.

What happened is that after lengthy negotiations involving local influential elders, and NGOs, such as Benon Tusingwire of NAVODA (Navigators of Development Association – a local NGO), and civil society activists, there are persons who actually received sumptuous compensation packages. These became our focus when by the time of fieldwork, which took place about two years after their compensation packages arrived, were considerably worse off than before. We found them disgruntled. It is easy to dismiss their disgruntlement as their own fault after they misused their monies. But that would miss the point and underplay their condition as poor, uneducated people who were turned into (Uganda shillings) millionaires overnight – and this new condition simply destroyed them.

What happened was that after being displaced by the state under state-citizen paternalistic arrangement, when compensation came, the relationship turned into a market arrangement, as if these people had sold their land on a willing seller, willing buyer arrangement. By switching the relationship (from a state-paternalistic one, in which the displacement happened, to a market-oriented relationship), which was easy and cheaper, the state abandoned its duty of ensuring that the displaced rebuilt their lives. The idea is to rigorously critique the supremacy of compensation; it should never have been reduced to just money. These people were never willing sellers.

Ahead of COP26 in Glasgow, in the UK, there is an important aspect of your book that reflects on the environmental impact caused by oil and gas exploration. You write about how oil related activities have led to rivers drying up and surface and ground water becoming polluted. Please tell us about the environmental implications to the region’s ecology.

I think because Uganda is in sub-Saharan Africa, there are no robust campaigns to care for the environment, because people think with the rains, the climate impacts are less visible. But by the time of fieldwork, locals told us 13 rivers had dried up in Buliisa where most exploration has happened. This had never happened before. These rivers had been reclaimed or turned into landfills and because of their smallness, they could not survive. Only three were still flowing. Flaring was also happening within a five miles radius. No one was taking stock of waste disposal. None. Bungoma Forest was being cut down by Hoima Sugar Ltd, which was established under the premise that they’ll need to supply sugar to the city in the wake of the oil boom. Yet as the rains continue to fall all this gets forgotten.

Your book also brings in the question of gender and I wonder whether we can discuss this. You argue that the oil and gas industry in the country impacts on women in destructive and distinct ways – can you tell us what your research revealed?

It was a disaster for women and children. In most rural areas, women have tended to be the main breadwinners – farming on their husbands’ plots! This enables most women to enter into peasant relationships selling their small surplus and earning a little income. But while compensating for these plots, only the man was considered as owner and thus beneficiary. He was the sole signatory to the money. In the end, the woman received no money and most husbands failed to buy other pieces of land. Often men, in complete disregard for their wives, spent the money marrying more women, and living lives they had seen on TV.  Then, with schools closed in the refinery area, for example, without new ones built, many children were denied education because the next schools were over ten miles away, and this is a rural area, with the only means of transport being on foot. It was a disaster.

Your attention to the voices of those directly impacted by this ‘new’ extractive industry in a model neoliberal country on the continent is particularly powerful. What were your hopes writing this book? What does the story of Uganda’s oil and gas bonanza tell us about the continent’s political economy and the continued struggles for autonomy and development?

Presently, the sector continues in a long and very secretive pause. Not much information is available to the public. Agreements remain hidden, and very little is known to the public (which is typical in neoliberal clandestine manoeuvring). In Kampala, a crude pipeline project was concluded (including Tanzania and Uganda, and Total), the Total executive Patrick Pouyanné was in Kampala and entered agreement with the government of Uganda. An airport is being constructed in western Uganda etc, but this is not our concern, or of any use to the people of the region – for the last 15 years since the evictions happened.

Capitalist exploitation tends to conspire with states to bamboozle the poor with big infrastructural investments (frequently useless and unnecessary) while the real devil is hidden in the fine print of agreements. Our intention is to make visible and permanent the lives of the poor in the oil conversation.  Many lives are continuously being wasted in this period, which sends a signal to what will happen once the oil in the pipes begin to flow.

Finally, what sort of resistance organised or otherwise has there been by the communities impacted, and are there any organisations helping to advocate or assist these communities?

There has been resistance and negotiations. At the peak of the conflict, residents resisted with protests in the areas, but were often violently suppressed and many ended up in jail. There have also been organisations at the forefront, leading resistance, but also negotiating, and pushing for better packages. Organisations such NAVODA negotiated compensation packages, negotiated native-settler wrangles; Global Rights Alert, and the National Association of Environmentalists (NAPE), who have utilised their “Community Radio” to report atrocities in record time, but also keep an eye on the wreckage to the environment.

Capitalist exploitation tends to be extremely violent, but these groups have tried to push back with limited success. You must appreciate that their capacity against the capitalist machine enabled by a Museveni secretive and comprador regime is surely miniscule. With a long pause in oil related activities, and a judicial system that takes ages, in the end people are broken, and crushed.  Others fall into poverty, some die, while others are bought off or imprisoned. Prominent activists such as Benon Tusingwire, Richard Oribi, and journalist Robert Katemburura have received threats for being at the forefront of some of these campaigns.

Yusuf Serunkuma and Eria Serwajja’s edited book, Before the First Drop: Oil, capitalists and the wretches of western Uganda will be published on 1 December 2021 with Editor House Facility (EHF), Kampala and will be available in bookshops in Uganda and on Amazon. Roape.net will be publishing extracts of the book later in the year.

Yusuf Serunkuma is a columnist in Uganda’s newspapers, scholar and a playwright. In 2014, Fountain Publishers published his first play, The Snake Farmers which was received with critical acclaim in Uganda, Kenya and Rwanda.

Imperialism and GMOs in Kenya: A perspective from social movements