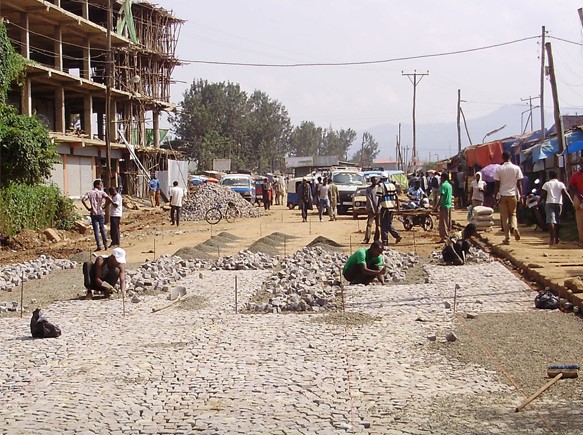 Ethiopia invests a higher percentage of its GDP in public infrastructure than nearly every other country in the world.  In this blogpost, Daniel Mains argues that the construction of infrastructure is a site for understanding the tense relationship between citizen and state in Ethiopia. In a contribution to the debate on Capitalism in Africa hosted by roape.net, Mains argues that an analytical method is needed that can examine these processes without assuming a capitalist society that is unified by a singular mode of economic production. Such an approach enables researchers to examine multiple, sometimes contradictory, economic dynamics.

Categorizing African countries or societies as capitalist obscures more than it reveals.  There should be no doubt that capitalist processes and relationships can be found in every corner of the African continent, but what does it mean to label a society as capitalist’?  For me this implies that capitalism dominates social life and determines the vast majority of economic practices.  From this perspective all economic practices, including gift giving, domestic labour, and producing for one’s self, become analytically subordinate to capitalism. I do not believe this is appropriate for Africa, or anywhere else in the world for that matter.  Although analyses in the roape.net debate of  Jorg Wiegratz’s and Horman Chitonge’s are certainly nuanced, as Elísio Macamo puts it, in categorizing societies as capitalist there is a risk for scholars to be ‘blinded by capitalism.’  For example, in Jörg Wiegratz’s compelling call to examine capitalism in Africa he provides an exhaustive list of ‘social phenomena that are typical of contemporary capitalist society across the world.’  The list includes things like mental illness, dating apps, and gated communities – all can be connected to capitalism, but all may exist independently of capitalism as well.  The notion of a capitalist society obscures the degree to which these social phenomena have roots in causal factors not directly related to capitalism.  As J.K. Gibson-Graham argued in the seminal book, The End of Capitalism (as we knew it), to conceptualize capitalism as encompassing any and all economic activities makes it nearly impossible to imagine alternative practices and methods of resisting inequality, outside of a massive structural revolution.

I follow Stefan Ouma in wishing to explore how economic dynamics interact with capitalist logics, without reducing complex processes to products of capitalism.  Rather than labeling a society as capitalist (or using any other single term to describe a society), my approach has been to examine relationships between specific dynamics, some that are directly related to capitalism and some that are not.   In my new book, Under Construction: Technologies of Development in Urban Ethiopia I take the construction of infrastructure as a site for understanding the often tense relationship between citizen and state in Ethiopia.  As Tom Goodfellow points out, Ethiopia invests a higher percentage of its GDP in public infrastructure than nearly every other country in the world.  This investment in infrastructure is partially responsible for Ethiopia’s rapid economic growth during the past decade.  Constructing infrastructure in Ethiopia involves the sale of labour to owners of capital, accumulation by dispossession, and state intervention on behalf of capital, as well as corruption, gift exchange, and workers’ cooperatives building roads.  There is no doubt that capital plays a major role in constructing infrastructure.  That said, to label the bribes that Chinese construction companies give to Ethiopian government administrators as capitalist, immediately closes off useful lines of inquiry.  What other economic logics shape the giving and receiving of bribes?  How do Chinese and Ethiopian understandings of bribery differ from each other?  How do personal relationships based in humor and friendship impact corruption?

In Under Construction I examine particular infrastructural technologies to articulate specific dynamics and relationships that are helpful for understanding capitalism, but do not depend on the notion of a capitalist society.  For example, the Ethiopian government is currently spending billions of dollars to hire private companies, particularly the Italian business Salini, to build huge dams on its rivers.  This is a clear case of accumulation by dispossession, but it is also grounded in historical center-periphery dynamics that are not directly connected to ownership of capital.  One might argue that center-periphery dynamics simply serve the interests of capital, but why not argue the reverse? Why should one determine the other?  An analytical method is needed that can examine processes like accumulation by dispossession without assuming a capitalist society that is unified by a singular mode of economic production.  This approach enables researchers to examine multiple, sometimes contradictory, economic dynamics.

In the remainder of this blogpost I will explore the cases of public transportation provided by three-wheeled motorcycle taxis and the construction of cobblestone roads.  Both of these technologies nicely demonstrate how many of the tensions associated with constructing infrastructure are rooted in the relationship between vital and historical materialisms.  Vital materialism refers to the agency of things.  In the case of infrastructure the particular qualities of different infrastructural technologies shape citizen/state relationships as well as broader inequalities.  Historical materialism, of course, refers to Marx’s analytical method.  Here, I draw from Donald Donham’s synthesis of Marx and anthropology.  Donham argued that historical materialism can be used to understand economic relationships that are not determined by ownership of the means of production.  Rather than ownership of the means of production, Donham argues that differences in control over the product of one’s labour shape conflicts and inequality.  As I detail below, given my interest in economic practices that are not easily categorized as capitalist, this combination of historical and vital materialisms offers a very useful analytical approach.

In March 2015, drivers of three-wheeled motorcycle taxis in Hawassa refused to work and the city came to a standstill.  In Hawassa, a city of 250,000 with only four state-owned busses, most residents relied on the three-wheelers, known by their brand name Bajaj, to move through the city.  As one passenger noted, ‘If the Bajaj is lost, then everything is lost.  Without the Bajaj we cannot move and there is no city.’  In other words, a city without Bajaj transportation is not a city because people are not free to move, socialize, and engage in commerce.  Although Bajaj were owned and operated for profit by private individuals, they were tightly regulated by the Ethiopian state.  The Bajaj driver strike was the culmination of long-standing anger among Bajaj drivers and owners regarding state regulation of the Bajaj system.  As one of the leaders of an association for Bajaj owners told me, ‘Government administrators know nothing about how transportation works in this city! Passenger fares, Bajaj routes, all of this should be left to the market.’

The vast majority of Bajaj drivers lease their vehicles from owners. They pay a daily fee to use the vehicle, cover the cost of gas, and keep everything they earn from transporting passengers. The municipal government determines where and when they can operate their Bajaj and passenger fares. In the case of the Bajaj, conflicts cannot be understood only in terms of ownership of the means of production. The state does not own the means of production (the Bajaj) or consistently support the interests of Bajaj owners, and yet the state is in direct conflict with Bajaj drivers.  Bajaj drivers consistently expressed resentment for the control that the state exerted over their livelihoods.  The Bajaj case is also complicated by the fact that capital does not hire labour, rather drivers lease vehicles from owners – a dynamic that is common to many cases of paratransit in urban Africa.

Conflicts were centered on drivers’ lack of control over products of their labour, but equally important were the particular qualities of the Bajaj as an infrastructural technology. The particular characteristics of the Bajaj, as an inexpensive, flexible, and labour dependent transportation technology shape conflicts between administrators and drivers.  In contrast to a minibus, the dominant mode of transportation in Addis Ababa, a Bajaj carries a maximum of three passengers, creating a great deal of potential work for drivers.  In this sense a Bajaj is a pro-social technology because it generates incomes for numerous drivers and their families.  Equally important is the fact that a three-wheel vehicle is much narrower and has a tighter turning radius than a four-wheeler.  Its light weight and slow speed enable the Bajaj to stop quickly, meaning that it need not maintain a great deal of distance from the vehicle in front of it.  Bajaj travel in clusters, often weaving in and out of traffic and stopping suddenly. All of these qualities supported government administrator claims that Bajaj are not ‘modern’ because they ‘close’ the street and prevent the easy movement of four-wheeled vehicles.  At the time of my research government administrators were attempting to replace the Bajaj with what they considered to be more modern mini-busses, a move that severely threatened the livelihoods of Bajaj drivers and owners.  Vital materialism brings analytical attention to these qualities of technology and the way they structure conflict.  In Hawassa questions of labour and technology were essential for understanding conflicts over public transportation.

Cobblestone roads are another case of infrastructural development that is best understood in terms of a synthesis of vital and historical materialisms. Beginning in 2007, first with the help of the German Development Cooperation Office (GIZ) and then with assistance from the World Bank, Ethiopia has employed well over 100,000 people to build more than 1000 kilometers of cobblestone roads, primarily in urban areas.  The Ethiopian state’s interest in cobblestone as an infrastructural technology is based largely in the particular qualities of stones.  During the 1990s and early 2000s rates of youth unemployment in Ethiopian cities hovered around fifty percent and lengths of unemployment averaged three to four years. Idle young men had a particularly visible presence on the streets of urban Ethiopia. The chiseling and setting of stones has created jobs for some of these young men, allowed them to experience normative social maturation, and reduced some of the pressure on the state from disaffected young men.

The success of cobblestone as a development strategy is also based on the particular relations of production used to build cobblestone roads.  In contrast to typical methods of building infrastructure, cobblestone workers are organized into cooperatives. The state distributes contracts to cobblestone cooperatives that share the profits from road building among the cooperative members.  This means that building cobblestone roads is far more lucrative than similar forms of manual labour.  It is worth asking how the construction of asphalt roads and dams would differ if the labourers who built these infrastructures shared the profits from million and billion dollar contracts among themselves. Cobblestone cooperatives demonstrates that this is not a purely hypothetical question, such labour relations have been successful in constructing durable infrastructures.

There are numerous connections between Bajaj transport, cobblestone roads, and capital – Bajaj drivers lease the means of production from owners; cobblestone roads facilitate the movement of goods and people that are essential for free markets. That said, there is limited analytical utility in analyzing the Bajaj or cobblestone roads as products of capitalism or a capitalist society. Historical materialism brings attention to tensions over labour that are not necessarily determined by capitalism. Vital materialism demands attention to the importance of technology.  A synthesis of the two offers an analytical method that is highly useful for understanding conflict, inequality, and infrastructure across the African continent.

Daniel Mains is Wick Cary Associate Professor of Anthropology and African Studies in the Honors College at the University of Oklahoma. He is the author of Hope is Cut: Youth, Unemployment, and the Future and Under Construction: Technologies of Development in Urban Ethiopia.