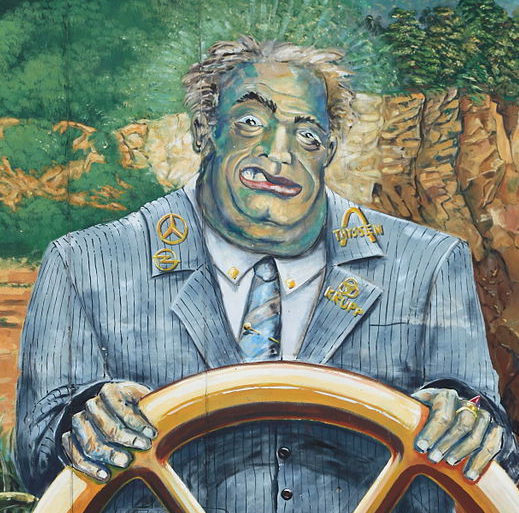 A few months ago, ROAPE’s Jörg Wiegratz (Leeds) invited fellow scientists to reflect on the state of (i) scholarship on capitalism in Africa and (ii) capitalism in Africa. This initiative resulted in a ROAPE roundtable on African capitalist society at the ASAUK 2016 in Cambridge, with Kate Meagher (LSE), Stefan Ouma (Frankfurt) and Jesse Ovadia (Windsor) as speakers, and Jörg Wiegratz and Peter Lawrence (Keele) as chairs. In the forthcoming weeks, we will publish on this website a report about the session (including some video footage), as well as a series of blogs by some of our speakers and also scholars such as Horman Chitonge (Cape Town) and Carlos Oya (SOAS) who were invited to the roundtable but in the end could not make it. We also plan a series of Briefings and Debates in the hard copy of the journal on the same topic. We will begin our debate with a piece by Stefan Ouma. Anyone who wants to contribute to the debate, via blog and/or Briefings piece, please write to j.wiegratz@leeds.ac.uk. We hope and expect that the debate carries on into 2017 and beyond.

At a time when ‘Africa’ is heralded as the last frontier of capitalism, and when scholars try to make sense of our troubled times through the notion of The Capitalocene, it seems timely to engage with ‘capitalism in Africa’. While this debate is not new per se, the historical context is very different from the 1970s and 1980s – the heydays of scholarly debates on this topic. Thus, I was delighted when I was asked to contribute to a roundtable on “African Capitalist Society” organised by Jörg Wiegratz of the Review of African Political Economy, however I would have felt more at ease with a less holistic framing of the subject matter. Talking in plural terms would have been a good start. So what can we gain by “linking a particular topic – that the mainstream somewhat de-links from the capitalism theme – more directly to the capitalism theme”, as the organizers ask?

Taking capitalism seriously as an analytical category, a historically distinct (yet globalized) sociospatial formation, and a lived praxis reminds us first and foremost about the materiality of economic life. It helps us to bring back ‘nature’ as the source of human production and reproduction into analytical focus, as well as questions of surplus distribution, social differentiation, and class struggle. Finally, it helps us to resocialize both society and economy by focusing on the dynamics and mechanisms of accumulation instead of merely thinking in depoliticized ways about ‘society’ or ‘the economy’. It is important for our own survival to take capitalism seriously and understand it, in Africa and elsewhere.

While capitalism is often imagined as an abstract machine whose “dominance is guaranteed by a logic of profitability, a telos of expansion, an imperative of accumulation, a structure of ownership and control, or some other quality of feature […]” (Gibson‐Graham 2006 [1996]: 15), I am much more at ease with analyses that are grounded in solid fieldwork, and which unpack the mechanisms and processes through which capitalist relations are enacted in specific contexts (rather than assuming that they exist apriori or that they take some universal, transhistorical shape).

My recent book Assembling Export Markets – The Making and Unmaking of Global Food Connections in West Africa adopted such an approach. Rather than treating capitalism as an abstract machine which functions according to a set of discrete laws that conveniently direct our analytical gaze, I treated it as something that requires explanation. Instead of  assuming capitalist commodity chains simply to exist, I was looking at how capitalist world market connections are being assembled in practice in Ghana’s horticulture sector. In other words, I was interested in the “generative powers of capitalism and the inequalities these powers create […]. the […] means and mechanisms—the very processes of generation— through which systems and socialities are made” (Bear et al. 2015). From such a perspective, the remaking of economic subjectivities, nature, economic encounters and orders must move to the forefront of analysis. Working on two case studies where export firms set up supply chain arrangements with farmers in northern and southern Ghana, I showed that capitalism is always locally engaged; establishing commodity relations is often a contested process; nature sometimes cannot simply be turned into a resource; marketization often clashes or is complexly intertwined with other geographically and socio-technical situated ways of performing ‘the economy; and that projects of economy-making often have unintended side effects that may bounce back in incalculable ways.

I can think of a number of phenomena that are yet to be subjected to such a generative analysis ‘in Africa’, including transport and logistics, the financialization of households (e.g. via M-Pesa) and firms (through stock market listings or venture capital and private equity entries), prosperity gospel, the rise of the middle classes, the global land rush, and capitalist subjectivities and moralities (especially against the backdrop that capitalism has never been very welcome as an official ideology among postcolonial policy makers, even in pro-capitalist countries such as Kenya). These phenomena make it imperative to engage with economic dynamics in African political economies that are co-shaped or even driven by capitalist logics. It does not mean, however, that these phenomena can be reduced to capitalism or they can be couched into neat territorial boxes, as the panel’s framing “African capitalist society” suggests. Often, these are products of the articulation of a variety of economic, social and material structures, relations and practices, both local and global.

But there are also a few other “limits of using capitalism as an analytical frame in the context of Africa”, as the organizers of the panel rightly suspect (and I pointed out in my book). Critical political economy accounts often show a disregard for other theoretical approaches because they are said to lack revolutionary potential or fail to understand the basic laws of capitalism; they tend to privilege abstract theory over empirical work or, worse, already know about the world before any real research has happened (after all, Marx already said everything!); and, probably most importantly, they tend to universalize insights and concepts derived from particular historical contexts and apply them comfortably to other places. All this also applies to much of the older work on ‘capitalism in Africa’, but even more recent work is not exempt from this ontological and epistemological practice. Can we, however, really make a call for studying ‘capitalism in Africa’ or ‘African capitalist society’ in a context where the original sin of capitalism, primitive accumulation, has not yet taken its full toll and land is often not treated as a full commodity? Where economic exchanges are often still about much more than simply money and commodities, and impersonal encounters, and rather entangled into complex webs of interpersonal relationships? Where labor has not just been just ‘set free’ and moved into industries, because there are so few? Anyway, who cares? Why not just try to understand African political economies in terms of the way they operate rather than qualifying them against some standard definition of ‘capitalism’?

My argument is not meant to do away with ‘capitalism’, or to deny the blasted landscapes and human exploitation it often leaves behind. Taking ‘capitalism’ seriously can indeed help rematerialize and repoliticize economic relations, positionalities and subjectivities as well as dynamics of accumulation that mainstream thinking usually obscures by using phrases such as ‘the market economy’ or ‘economic development’ (actually the whole Africa Rising narrative was built on an insufficient understanding of capitalism). However, any perspective on ‘capitalism in Africa’ that operates with linear, territorial, singular or transhistorical notions of ‘capitalism’ falls into the trap of universalism. It can be doubted whether the rise of the middle classes in Africa follows the historical paths of North America Europe or parts of Asia; whether Africa will become the new manufacturing frontier as industrial capital is searching for ever cheaper sources of labor (as some scholars envision in line with the ‘flying geese model’); whether the city and the countryside will become ordered (and disentangled) in the way as happened elsewhere; and whether accumulation for accumulation’s sake will become sooner or later an existential feature of much of economic life in Africa.

At the same time, we cannot deny the universal aspirations of the commodity form, money/finance and capitalist rationalities. Yet, ‘Africa’ is not a passive bystander in this project of universalization or doomed to mere convergence. As the Comaroff’s recently put it, “African modernity, in sum, has always had its own trajectories, giving moral and material shape to everyday life. It has yielded diverse yet distinctive means with which to make sense of the world and to act upon it, to fashion social relations, commodities, and forms of value appropriate to contemporary circumstances—not least those sown by the uneven impact of capitalism, first colonial, then international, then global” (Comaroff and Comaroff 2013: 18). We could even go further and say that the metabolic and social future of (global) capitalism will be probably decided in Africa (Mbembe 2016) and African actors will have a say in all of this. While the world has historically taken many things (and people treated as things) from the continent to engineer its economic system, it may take a few other ‘things’ (or better: concepts, practical philosophies, and modes of existence) from the very same region to overcome the very same system. It is not naive romanticism to claim that African societies have a lot to offer to the world, not just cheap commodities. However, it needs a solid politics of the future (Mbembe 2013) to make visible these invisiblized potentialities in a world where economic mimicry (of either the West or Asian success stories) is often the only recipe that African policy-makers seem to have.

Stefan Ouma is an economic geographer by training. He works at Goethe University, Frankfurt. He is interested in the socialities, materialities, and practicalities of global economic connections, first and foremost in the realm of agricultural commodity chains, standard-setting networks, global logistics, and more recently, agri-focused financial investments. His research combines interests in global political economy with the ambition to explore these macro issues in the minutiae of everyday economic life.