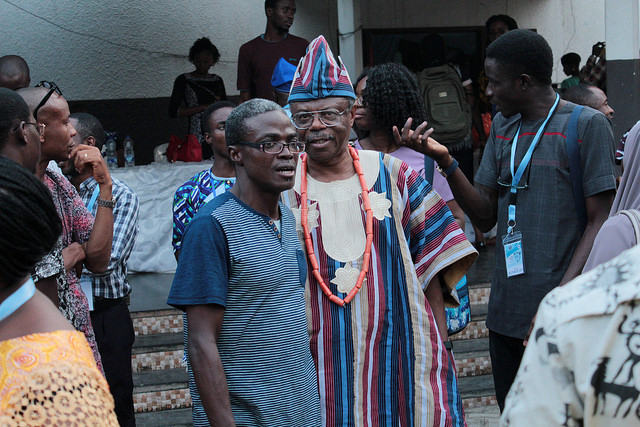 By Amber Murrey and Edith Phaswana

The Toyin Falola @65 Conference brought together scholars from across the African continent and the world from 29 to 31 January 2018 under the theme, ‘African Knowledges and Alternative Futures.’ Our focus reflected on the long struggle for epistemic justice on the continent while centring and recognizing Falola’s important role in the project. This was a unique conference in terms of its structure, content, as well as the diversity of intellectuals that it attracted.

The venue for our coming together was the University of Ibadan (UI) – significant not only because Falola was born in the city in 1953 but also because UI is Nigeria’s oldest and most respected public university. UI was founded in 1932 as the first public university in Nigeria. At the time, it was an affiliate of University College London in the United Kingdom. Built in 1948 and completed in the 1960s, UI was the first university built in British-occupied West Africa.

Early colonial universities, Toyin Falola explains, were at the centre of colonial power dynamics and political struggles in Africa. Falola writes that these universities were ‘created to meet the needs of those Europeans who envisaged a permanent homeland in Africa… The universities were seen as concessions made after the Second World War, a strategy of pacifying restless Africans and of ensuring that decolonization was controlled at a pace set by Europeans’ (2018: 608). These universities were also spatially and geographically significant. 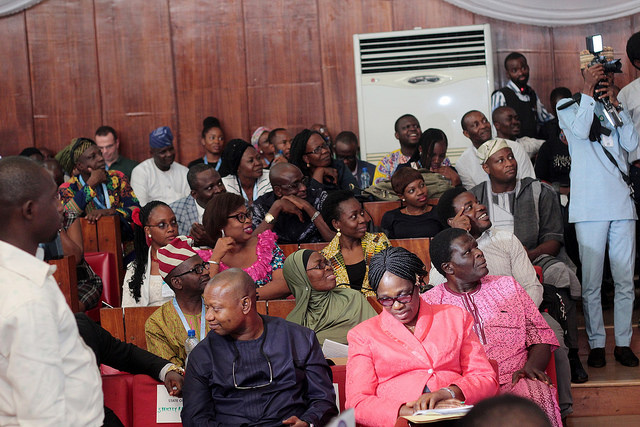 At the conference, Oluwabunmi Fayiga traced the ideological symbolism of architectural materials in the British design in the construction of UI. In the colonial context, the design and production of spaces like UI was rich with colonial symbolism, in this case the association of certain materials with poverty and other materials with modernity/civilization. Fayiga’s discussion focused on the ways in which two British colonial architects, Maxwell Fry and Jane Drew, employed a conscious ‘social decision-making’ to promote the use of concrete and corrugated steel in Nigerian architecture. These ‘permanent’ materials were associated with the colonial power. All the while, bamboo roofing and the use of mud as building material was deemed ‘unrefined.’ Fry and Drew’s preferences for certain materials were regarded as ‘modern choices’ despite their inappropriateness for local ecologies and social settings. Colonial architecture, Fayiga argued, is a domain through which we might trace colonial arrogance and the resistances to it.

This event was differently structured. Not just by the energy of governmental leaders delivering extended speeches in honor of Professor Falola, but also through an active and conscious attention on the part of the organizers and participants to collectively celebrate the intellectual lifetime of Professor Falola, who has been an influential powerhouse across the disciplines in the study of Africa.

A historian by training, Toyin Falola’s work transcends disciplinary boundaries, appealing to scholars across different backgrounds and disciplines. The author of some 300 books, chapters, and articles, Falola has also supervised several dozens of graduate students, some of whom were present at the conference. He is the coordinator for the highly subscribed e-group USA-Africa Dialogue and is well known within African Studies for his conference and workshop organizing. Falola has been at the forefront of charting a path for African intellectuals and validating humanizing accounts of African history. 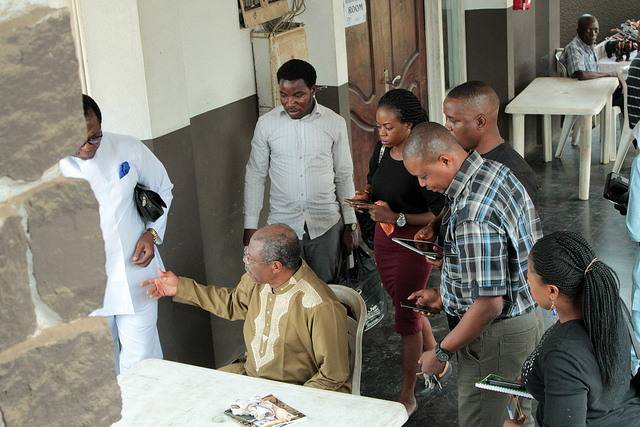 From Pan-Africanism to Poverty to Decolonization

Comprised of nearly 300 papers, the conference was impressive in its breadth and interdisciplinarity. Unifying topics including critical expressions of identity, dignity, colonial critique as well as grounded discussions of political and socio-economic paths forward. Specific papers considered historical and contemporary challenges to Nigerian publishers; doctoral training programs on the continent as important places for supporting and cultivating strong doctoral candidates, ‘alternative futures’ such as epistemologies based on Islam, Yoruba, Thomas Sankara’s political thought and decolonial thought, the role of the intellectual and more.

Some scholars argued that ‘the canon’ should be eradicated because it inherently reaffirms boundaries. Others considered the ways in which contemporary Pan-Africanism makes meaningful contributions to African problems. Some argued that Pan-Africanism must deal with capitalism. Others argued for a ‘new breed of African capitalism… one that is regulated and productive.’

Yoruba does not have a word for poverty, Tunde Decker informed the audience. The sense of ‘being a victim of poverty’ does not hold true in Yoruba. Rather, inée connotes a lack that signals a miscommunication between the individual and deity. To resolve inée, a person needs to strengthen that communication by going to an Ifa priest. Also related to poverty is the concept of ori, or the force that is chosen in the spiritual realm. In this way, it is thought that a person might have chosen an ori that does not allow them to live a good life. If a person has a disconnect with the ancestors, this disconnect might manifest itself within the material world through a lack. What was not considered was how the inée might, inadvertently, bolster neoliberal capitalism through an individualization of lack.

Innocent Moyo’s work on decolonizing borders generated powerful audience responses. Borders are political institutions and the heightened securitization of borders is in tension with moves to create regional integration in Africa. Moyo asserted the importance of race for projects to ‘decolonize borders,’ this is because, on the continent, borders often operate through and are constitutive of ‘anti-blackness.’ His talk generated considerable debate about the ‘practicality’ of a decolonized border system. Although his argument was not that borders themselves be altogether eradicated but that the practices of bordering be decolonized.

The Intellectual in Africa

Professor Chris BN Ogbogbo, President of the Historical Society of Nigeria, remarked in his keynote address, ‘The academic’s primary role must be to move students to be knowledge producers.’ He argued that scholars must necessarily become activists against the backdrop of the failure of mainstream intellectuals to provide grounded and politically relevant ideas.

The role of the intellectual in Africa has likewise been a centrepiece in Falola’s work. Falola writes,

How Africans, either at home or abroad, will acquire autonomy and control the production of knowledge about their continent will ultimately depend on the possibility of a positive political and economic transformation of Africa. The marginality of African studies and Africans’ feeling of irrelevance in Western institutions reflect the marginality of the continent in world affairs. If Africa lacks the resources to sponsor research and publish, to retain excellent scholars and build viable universities, it will be hard to overcome intellectual domination by outsiders who have their own agenda, interests, and priorities. (Falola 2018: 710)

Ogbogbo argued that, at the core of Africa’s development challenges, is the manner in which knowledge is produced, disseminated and consumed in Africa – including for what purpose and reasons. He lashed out at academics for what he referred to as the ‘think tank of the post-colonial state in Africa,’ for failing to provide ideas to ‘unshackle’ people and societies from persistent capitalist crisis in the continent.

Yet there was perhaps insufficient recognition of the inability of our states to use evidence-based information to make decisions and implement policies in such discussion. Africa is, after all, home to CODESRIA, a productive research organization in the social sciences that spans more than forty-years of successfully generating and circulating African knowledges. But the question is also how many African governments make concerted efforts to or are even willing to draw from such knowledge in public policy making.

A special panel was convened by the Thabo Mbeki African Leadership Institute in South Africa under the theme ‘African Knowledges, Epistemologies and Leadership’. Within the context of the coloniality of knowledge in which epistemic perspectives are informed by Euro-centrism, Samuel Oloruntoba asserted the need for ‘thought liberation.’ An aspect of this liberation involved the deliberate use of Pan-Africanism in a paradigm of global anti-Africanism. 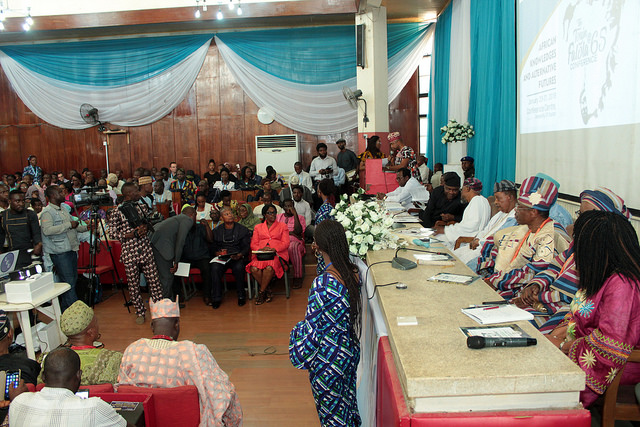 Edith Phaswana spoke of the need for an Afro-decolonial curriculum at universities that draws from Afro-centered and decolonizing epistemologies. Drawing from Pedro Tabensky and Sally Matthews’ Being at Home, she spoke of the importance of African students finding a home in a university space that is usually alienating in terms of its knowledge and ways of knowing. ‘We are all products of Westernized universities —even if we have gone through university systems located on the African continent… We are all disciplined by the different disciplines we subscribe to,’ she reminded the audience.

As a historical reality, Africa was integrated into an international system on terms defined by the West. African intellectuals cannot escape the reality of this integration. Neither can they escape the fact that the ideology that drives scholarship is controlled by the West and that what African scholars have done is primarily to respond…In spite of the success of many notable African intellectuals and the creation of centers of learning in the continent, ‘the Western academy remains the unique source of validation for the African scholar.’ There is a dependence on Western languages and Western-derived theories and concepts… (Falola 2018: 682).

Phaswana’s work in South Africa seeks to bridge Afrocentricity and decolonial thought to assert an Afro-decoloniality by carefully selecting knowledge that seeks to ‘advance humanity’ in ways that offer possibilities to learn from each other and discarding those that are demeaning, infuriating, marginalising and harmful to humanity. She argued that Africa is unapologetically a legitimate site of knowledge production, and Africans are also credible producers of knowledge about Africa and the world.

In her powerful keynote address, Professor Gloria Emeagwali  articulated a ‘Toyin Falola framework for knowledge cultivation’: a model of knowing based on methodological plurality that draws on trial and error, is founded on diverse ecologies (including a ‘bias toward nature’), respect for ancestral wisdom, and commitments to holism and non-linear trajectories. This framework, she asserted, must connect with anti-racist scholarships.

Professor Emeagwali called on young scholars to take seriously the legacy of Africa. This is a legacy which must be preserved, improved on, and sustained for prosperity. She argued that this legacy is a bequest from ancestral wisdom, inspiration, and scientific experimentation. For her, Falola is a role model through his outstanding work, she urged the younger generation to replicate it transcontinentally.

While sessions at the conference emphasized the importance of African knowledges for African futures, it is important not to lose sight of the importance of African knowledges for people and struggles outside of the continent. Our discussions at the conference should also be relevant for students in Cuba, Mexico, the Netherlands and beyond.

…Africans need not construct a cage for themselves, that Africans have to receive and use the ideas from all parts of the world, that African cultures and customs have to be refined to cope with the forces of modernity and change…Africans [must] transform ideas, create new paths, review their histories, and meet the challenges that transformation will pose (Falola 2018: 710)

Amber Murrey is a decolonial political geographer with research interests in political ecology, resistance studies, and resource sovereignty. She is the editor of ‘A Certain Amount of Madness’: The Life, Politics and Legacy of Thomas Sankara (2018) and teaches in the Department of Sociology at The American University in Cairo, Egypt. She tweets @AmberMurrey. Her participation at this conference was sponsored by an AUC Faculty Conference Grant.