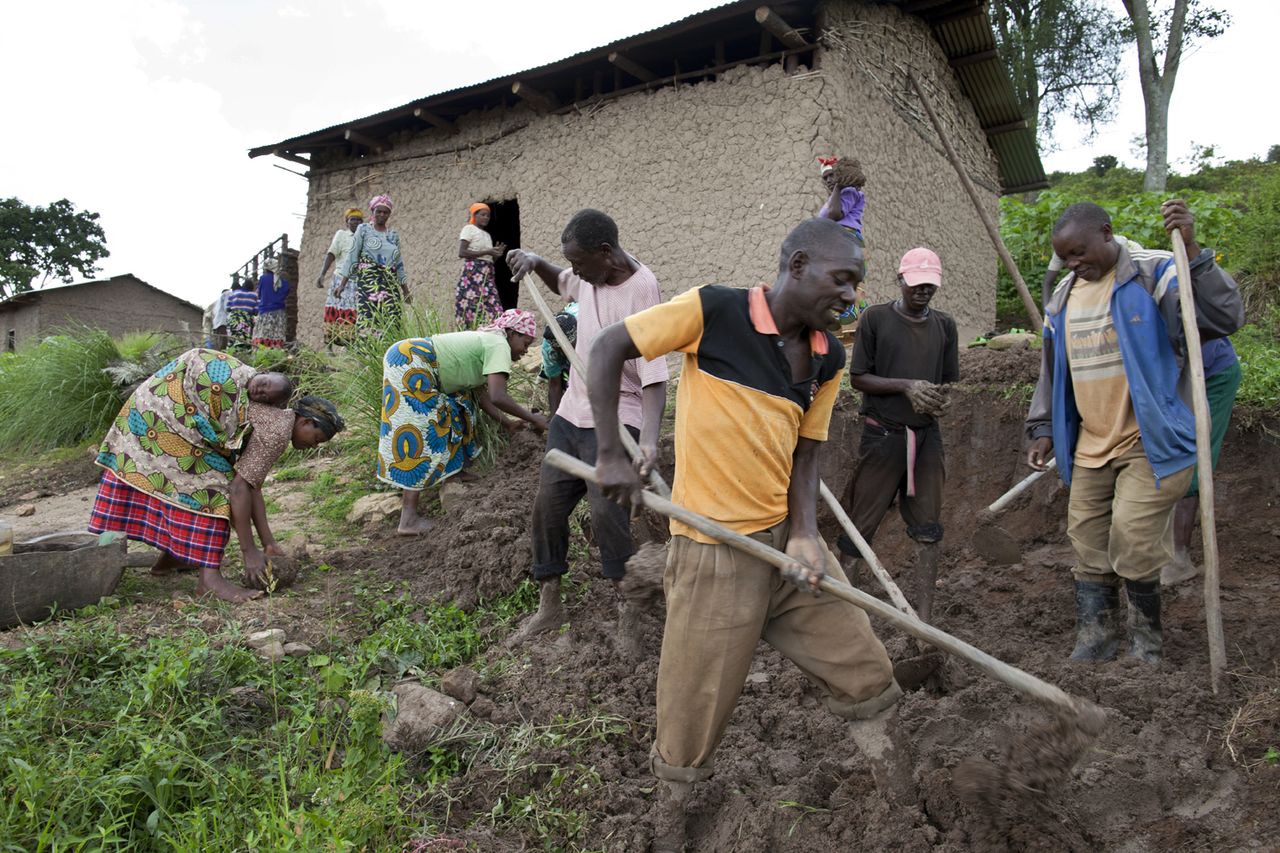 Rwanda is commonly accepted as one of today’s developmental states. Throughout the still-ongoing reconciliation after the 1994 genocide, economic growth, poverty rates, health and education have seen impressive improvements, particularly so for a small landlocked country with few natural resources. But this has been challenged by an on-going debate on the ROAPE blog. Two specific claims have been made – that the GDP figures have been fudged since 2005 and that government disguised a poverty increase between 2011-2014 as a decrease through a misleading poverty line change. This blog will argue that Rwanda’s development model leaves some risks for its sustainability.

One post by the anonymous authors alleged that GDP figures had been manipulated, using a discrepancy between consumption figures by national account statistics (NAS) and household surveys (HHS) as evidence. This looks plausible, but the claim rests on shaky foundations; there is little basis for thinking that such a discrepancy is evidence of wrong-doing. Martin Ravallion is quoted as saying that NAS growth rate should be an unbiased predictor of HHS rate. But this is based on all regions excluding Central Asia and Eastern Europe and after disaggregating by region the relationship between HHS and NAS is especially poor in Sub-Saharan Africa. Ken Simler in 2008 also shows sub-Saharan Africa as particularly unreliable, with nearly half of countries showing a 30% discrepancy. Many factors explain the difference, as both methods have different methodologies and coverage. HHS tends to underestimate income and expenditure; NAS is expected to be biased upwards as an economy develops because of the method of accounting for the informal sector; and a rapidly growing NGO sector is captured in NAS but not HHS data. The blog on Rwanda’s GDP growth ‘myth’ shows a declining HHS/NAS ratio, from 1.08 to 0.65. This trend is consistent and expected with strong growth. For example, between 1985-1994 HHS/NAS fell from 0.80 to 0.67 in Botswana, when it enjoyed an average annual GDP growth of 16% (data from worldbank.org (2018a), formula from Bea.gov (2018)).

So, there is actually a great deal of evidence of a healthy economy beyond the usual indicators. Tax revenues have been steadily increasing at an annual average of 19.5% from 2000-2015 (stats.oecd.org, 2018) and growth is one of the strongest predictors of increased revenue (Drummond et al. 2012, Pessino and Fenochietto 2010). Of course, it may not have been the driver in this case, but all other known determinants are positive for the economy and include high trade and investment in education, and low inflation, share of agriculture in GDP, gini coefficient and corruption. The ROAPE blog also presented evidence of an ailing economy, but this was at Rwanda’s weakest point. The current account deficit, capital flows and GDP growth have all improved since. The downturn at the time was caused by a wider fall in commodity prices, a crisis which spread throughout the entire region and does not suggest mismanagement. The trend for GNI per capita is below – Rwanda performed slightly better than the region as a whole (see worldbank.org, 2018b). 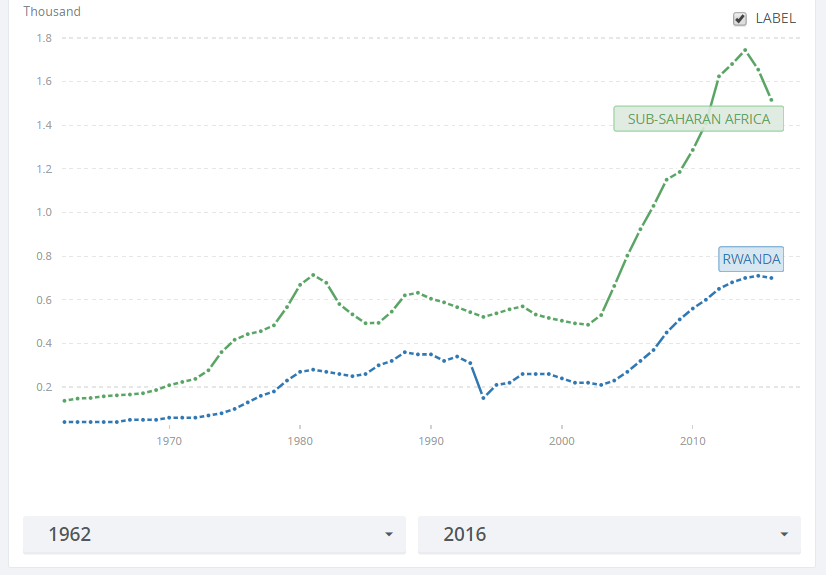 The previous ROAPE blog, following Filip Reyntjens, alleges the poverty line was changed between EICV3 and EICV4 to present a misleading reduction. A statistical analysis showed that poverty increased when the line was constant across both surveys. In a further ROAPE blog Sam Desiere followed-up by calculating the poverty change in a different manner, and found increased poverty assuming high inflation. The evidence seems strong, and the case is not as clear as for GDP. But there is reason to doubt the veracity of the claims. Firstly, all attempts in the ROAPE debate (the anonymous authors, Desiere and Reyntjens) are based on the assumption that in order to compare trends in poverty all methodologies and definitions must be constant. However, this is not the expert advice. Assessing poverty through time is difficult and it is well-recognized that if the poverty line and consumption basket were kept constant, rates would then be incomparable due to changing consumption and socioeconomic patterns. It might be wrong for the government to present a decrease based on different poverty lines, but it is not rigorous either to present increases based on unchanging methodologies and baskets (worldbank.org, 2018c) Secondly, the price index was the Laspeyres index. This is known to over-estimate inflation and is therefore expected to show exaggerated poverty increases or muted decreases (see Gibson, 2018). These analyses may well reach the same conclusion, but the finding is not robust if they depend on high inflation without strong justification. The authors state that the choice of price index does not change their conclusions – in this case releasing results for other indices would strengthen their argument.

The original analyses are somewhat inconclusive, so it is important to look more broadly at indicators of Rwandan development, particularly given the expansive claims made by the authors in the debate – that ‘the donor darling’ is being exposed, that any strong growth fizzled out long ago and the economy will soon crash, that much of the improvements are cosmetic or that Joseph Mobutu’s Zaire is the best analogue. This has been done for health, education and social indicators by Lee Crawfurd in 2018 and there is no point replicating the work – it sufficient here to say that on almost every indicator progress is in a positive direction. To briefly supplement, between EICV 3-4 households with at least one savings account increased 36.1%-54.1%, waged farm workers increased 9.8%-11.4% and percentage of waged non-farm workers increased 16.8%-19.6%. These are not all donor-funded, and is it worth pointing out that Rwanda has the fifth-highest statistical capacity score across the continent (worldbank.org, 2018d).

The question is whether Rwanda is an authoritarian regime that fabricates statistics to gloss over abuses, or whether it is an authoritarian regime that does in fact achieve development for its citizens. The weight of evidence is still strongly in favour of the latter. Even if it were the case that some statistics are not reliable, they would have to be some way off before we’d have good grounds to abandon this conclusion. However, this is not cause for untrammeled optimism. The development model of Rwanda which some have called ‘developmental neopatrimonialism’ comes with risks and costs.  So, what are some of these sustainability risks?

In order to understand the risks, it is important to know the model. Neopatrimonialism is a vertical client-patron system where patrons, typically a strong party or individual, will use state resources to win the loyalty of clients. It is often thought to be a hindrance to development in sub-Saharan Africa as it fosters corruption, with rulers typically using their power to distribute economic rents for short-term and personal gains. But, there have been cases where this system of rule becomes beneficial to the development of the state. In Tim Kelsall’s  framework, developmental neopatrimonialism occurs when the powerful individual or party manages economic rents in a centralized fashion to enhance long-term development and stability, rather than for short-term gains. Rents are used to invest in areas such as health and education, and an attempt is made to re-orient the economy away from rents and towards productive sectors. David Booth and Frederick Golooba-Mutebi argued in 2012 that Rwanda follows this pattern. Corruption in Rwanda is rare and severely punished and it scores highly on ease of business rankings (World Bank and IFC, 2010). The Rwandan Patriotic Front (RPF) has significant control over the private sector through a number of investment groups but predominantly a holding company called Crystal Ventures Ltd (CVL), formerly Tri-Star Investments, and uses this to finance strategic sectors in the economy. The RPF owns 100 per cent of the equity and the board is nominated by the party. Profits are either taken as tax, or accrue as dividends to the RPF, and none has been used by RPF members for personal enrichment. The rationale behind these investment groups has been to address the strategic needs of the country while also investing in new sectors through a subsidiary company, and then to exit the sector once the company was becoming profitable (Behuria 2015).

There is good evidence that this strategy has boosted growth, including numerous success stories of RPF-owned companies. One example is the growth of the tourism industry. Prime Holdings (another RPF-owned group) invested in hotels, two prominent ones being the Kigali International and the Kivu Sun Hotel. After successful performance, these were privatized and were bought by the Serena Group, now owned by the Aga Khan fund (Behuria 2015). Between 2001-2012 the tourism sector, after prioritisation by the government, attracted the highest investment of any sector. In 2012 tourism accounted for 6.4% of all employment and revenues rose from $12mn to $282mn from 1996-2013. Other examples where this strategy was successful include telecoms (Namata 2015), pyrethrum, road construction and property management, usually with CVL as a ‘first-mover’ in the sector. In 2014 CVL had a 50% stake in 12 often sector-leading companies.

But the risks are clear. Rwanda is not the only case of developmental neopatrimonialism. Booth and Golooba-Mutebi identified other examples in Africa of sustained growth under this model, of Cote d’Ivoire from 1960-1975 under Houphouët-Boigny, Kenya from 1965-1975 under Kenyatta, and Malawi from 1964-1978 under Banda. In each of these cases the model did not lead to continued growth, stability and poverty reduction. Kelsall attributes this to either losing tight centralized control of rents as in Côte d’Ivoire, where after 1975 resources were spent on inefficient and corrupt parastatal organizations or maintaining tight control but foregoing a long-term developmental focus as under Daniel Arup Moi in Kenya after 1980. In each case, the developmental state was initially held together through the will of a small number of people, meaning the developmental status was lost when conditions changed. And this is a real threat in Rwanda, because much of the discipline and tight control is driven by Kagame personally, including crackdowns against corruption and politicians benefiting from CVL. For example, in 2000 then-president Bizimungu complained about what he saw as excessive discipline before being removed by Kagame. This shows how easily the regime could have gone in a different direction and can still do so. If Kagame were to leave office to a less scrupulous figure the system of RPF-owned holding companies could provide an ideal vehicle for corruption and self-enrichment. As yet, it seems there is no suitable successor at all.

Rwanda’s success since the genocide in terms of economic growth, poverty reduction and improved living conditions are almost certainly real, and much is attributable to strong discipline and good management. The evidence needed to back the strong claims of serious manipulation is not currently forthcoming, although recommendations to scrutinise data are welcome. But the regime faces risks. There will come a time when these past few decades will be judged by the future they prepared – and unless the political situation is handled well, it may suffer the fate of being seen as a lost opportunity.

Dónal Ring is a post-graduate in Development Practice at Trinity College Dublin – University College Dublin. He has previously written for and edited a range of publications and is currently a Graduate Fellow at the International Livestock Research Institute in Nairobi.

Featured Photograph: Households work together to rebuild a home compound in Rwanda (17 May, 2012).

Reyntjens, F., 2015. Reduction of poverty and inequality, the Rwandan way. And the aid community loves it (No. 16). Universiteit Antwerpen, Institute of Development Policy (IOB).