Over the last decade, the Rwandan state has invested heavily in smallholder agriculture, resulting in improved national-level yields of key crops (particularly cereals) and improvements in national rates of nutrition and food security. The reform is a key part of Rwanda’s efforts to develop at the macroeconomic level, as well as to improve rural household incomes; it has increased agricultural productivity and aggregate food security, and has garnered international praise from donors, multilateral organizations, and some international NGOs. Compared to other low-income countries (particularly in sub-Saharan Africa), the commitment of the government to its own idea of ‘rural development’ is remarkable. 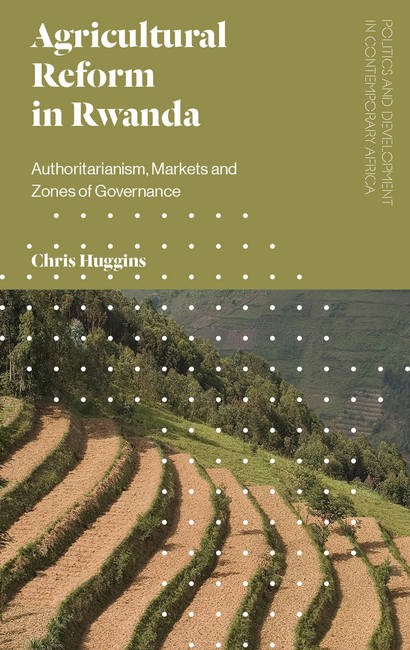 Nevertheless, a recent ROAPE blog provided evidence of some negative impacts of the agricultural reform, and several ROAPE articles have critiqued claims of success (see  Ansoms et al. 2016 and Cioffo et al. 2016). A new book, Agricultural Reform in Rwanda: Authoritarianism, Markets and Zones of Governance, published by Zed Books in October, also critically examines the political economy of contemporary agricultural reform in Rwanda. Using the concept of authoritarian high modernism, this book examines in particular how the involvement of cooperatives, non-governmental organizations (NGOs) and private companies in the agricultural sector influences the processes of spatial and institutional homogenization, standardization and coercion associated with the current agricultural policies. In addition, noting that the Rwandan government’s attempts at strengthening and extending the reach of the state are entwined with processes of commodification and commercialization, it asks how discourses and practices of neoliberalism in the agricultural sector intersect with state efforts to mould ideas of citizenship, development and governance within specific geo-spatial contexts. I argue that James Scott’s framework in his 1998 book can be adapted through reference to critical political economy literature, particularly to refer to processes of accumulation by dispossession which are evident in some of the case studies.

Rwanda’s reform should be viewed within a broader context of international aid. The book traces the nature of relations between the government of Rwanda and donor agencies, through a ‘global governmentality’ framework. Such a framework enables recognition that international systems of assessment of aid effectiveness and governance (linked to foreign investment decision-making, and hence commercialization of agriculture) require states like Rwanda to produce quantitative, aggregate data on policy implementation. Target-driven development approaches can lead to over-simplifications in design and evaluation and also encourage the use of compulsion to reach targets.

The incorporation of commercial and non-profit actors into the apparatus of rural development programming in Rwanda reinforces and extends the power of the state, rather than providing alternatives to state policies of homogenization, standardization and coercion. The book contends that the choice of crop types in the crop intensification programmes were at least partly motivated by a desire for profitability at higher levels of agricultural commodity chains, rather than at the level of the farming households.

The Rwandan state encourages farmers to become ‘modern’ and ‘professional’ through commercializing agriculture and embodying the neoliberal ideal of the self-governing, entrepreneurial individual. Discourses and practices associated with liberalism and neoliberalism in the agricultural sector are part of broader attempts by the Rwandan state to create a new kind of Rwandan citizen. Entrepreneurship, subjection to restrictive government policies and patriotic and reconciliatory ‘good citizenship’ are discursively intertwined. This generates various tensions and contradictions.

The Rwandan state has adapted neoliberal tools, such as the performance contract. The Rwandan imihigo performance contract system ensures that specific development targets are shared through a hierarchical structure of obligations from the level of the district, down to the household, and ultimately the Rwandan individual. Agricultural targets are often included in imihigo, which are largely imposed by the authorities (rather than the citizens signing the contract). The Rwandan state has tried to harness the imihigo structure for corporate interests.

Coercion, and state intervention more generally, is more explicit in some geo-spatial contexts than others. Certain areas can be identified in which the disciplinary aspects of governance are particularly evident, and where some technologies of governance are tailored to reduce the abilities of farmers to avoid integration into priority agricultural commodity chains. As such, these areas represent emerging zones of governance with particular characteristics, and demonstrate that the strategies of the state are not completely monolithic or uniform across Rwanda.

The first example is an agricultural cooperative in Musanze District, Northern Province, which was founded by an entrepreneur connected to the ruling party. The case study illustrates the ways in which private actors may use the same homogenizing technologies as the state while relying on particular ‘local’ dynamics to ensure their influence and control over agricultural institutions such as cooperatives. It is also an example of overt individual and collective resistance to a very powerful individual. The cooperative, which had not adequately paid farmers for their harvests, eventually collapsed due to local resistance.

The final case study describes the disciplinary and governmental approaches to enforcing maize policies in Kirehe District, Eastern Province. Whereas farmers often lose money growing maize (as it is not sufficiently drought-tolerant for the local agro-ecological conditions), commercialization of the maize sector in this District has involved new financial incentives for local authorities, who receive payments when fertilizer is purchased and correctly applied by farmers. This led to widespread coercion, as many farmers were forced by the authorities to buy fertilizer. Many farmers feel that their role, as citizen-producers within the contemporary Rwandan rural political economy, is reduced to that of a labour force, and have hence engaged in a number of covert strategies which go beyond ‘everyday forms of resistance’ and amount to radical reconfiguration of livelihood strategies.

The dynamics seen above suggest that the reform will accelerate economic differentiation amongst smallholders, a conclusion that has been suggested by other research.  This raises the question of what will happen to smallholders who are forced to sell their land or are more generally forced out of the farming sector. Some supporters of the agricultural reform argue that short-term negative impacts experienced by smallholders may be a necessary price to pay in order for Rwanda to achieve economic growth and manage an agrarian transition in the medium to long term, through intensification and commodification of agriculture. ROAPE’s Graham Harrison argues that ‘the agrarian question is a troubled one, issuing in a politics of constraint, contingency and always (much to the chagrin of liberals) the politically devised allocation of hardship.’  Others, such as David Booth and Frederick Golooba-Mutebi, have been optimistic about the potentials of the reform.

One of my counter-arguments is that academics who focus primarily on macroeconomic and high-level political aspects fail to adequately account for the political economy of local-level governance. The data on coercion presented in this book complement other studies documenting the use of imposed land use changes and punishments. Despite this body of work, major reports on agricultural production in Rwanda fail to acknowledge the extent and significance of such strategies.

Chris Huggins is an assistant professor at the School of International Development and Global Studies at the University of Ottowa, an adjunct professor at the Institute of African Studies, Carleton University, and a non-resident research fellow at the African Centre for Technology Studies (ACTS).

All photographs were taken by Chris Huggins.

“Effectively operating as a firing squad” – the guilty must face...