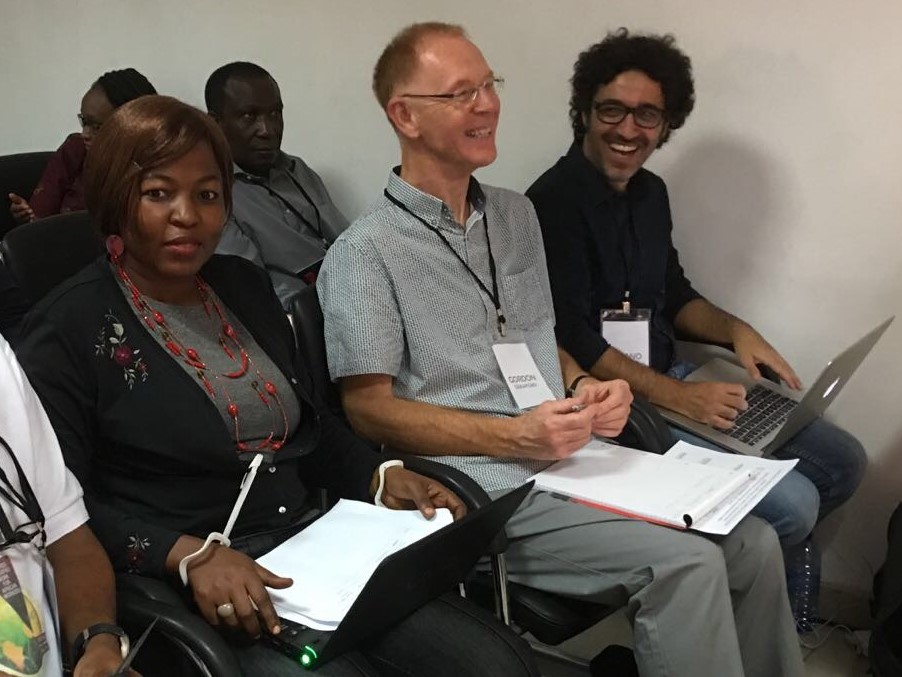 Was the Russian revolution a peasants’ revolution? Appraising how fraught with problems is the creation of alliances between urban and rural struggles in most African countries and how pervasive these struggles are across the continent brings us back to the relevance of historical lessons such as the Russian revolution. Which agrarian politics are conducive to broader change? Why are the agrarian roots of the Arab springs so underestimated? Can intellectuals play a positive role?

At the ROAPE/TWN workshop in Ghana Elisa Greco, Max Ajl and Giuliano Martiniello discussed the interlocking of struggles against primitive accumulation and those against exploitation in the countryside in Tanzania, Uganda and Tunisia.

Panellists argued that African countries are not gearing towards structural transformation of their economy, but rather promoting an extractivist model. This classically sees a rapid growth of foreign investment in the mining, oil and gas sector geared towards exports to the world market. In addition to that, a similar pattern is observed in agriculture, which is structured (or re-structured) towards exports to the world market, which entrench primary commodity dependence. Whether this pattern will be steered towards Latin American variants of neo-extractivism – where rents are reinvested by the state into social service provision – or not can make a big difference in terms of social redistribution. But this does not change the nature of the model, which is not gearing towards radical structural transformation, rather perpetuating the extractivist project of pillaging poor, resource-rich countries. Agrarian questions in contemporary African countries are to be framed within this extractivist picture, as it affects the rural economy and rural working poor disproportionately because it is based on land enclosures.

This is why many social and political struggles by the working poor in the countryside in Tanzania and Uganda coalesce against the expropriation of land (see here and here). In all their diverse articulations, land struggles amount to resistance to primitive accumulation – the forceful and violent separation of producers from the means of production. These struggles are often weakened by the class dynamics of highly commodified rural societies, where capitalist farmers side with agribusiness against small farmers and landless farm workers (for more on this see here). Another element of weakness is their highly localised character. These two features stand against the unity of struggles on a wider national and regional level and often disperse their effectiveness.

Nonetheless the pervasiveness of social and political struggles points to the continued relevance of rural resistance in advanced capitalism. Primitive accumulation affects the rural working poor – both landed and landless – as much as does exploitation. Collective land claims exist in parallel with wildcat strikes by farm workers on rice and sugar plantations (see here), which often pay workers below the current rates in the local labour markets. Yet the working poor are forced into wage work, because rural economies often do not even guarantee mere survival, as testified by worsening living conditions in many rural areas in Uganda and Tanzania since the 1980s. Farming on a micro, small and middle scale in Uganda and Tanzania relies on extreme self-exploitation of farmers, who squeeze their own capacity  to survive  in order to keep going, and work double jobs to subsist, both on and off farms.

Panellists also observed that the current phase of financialised land grabs promotes a model of ‘agriculture without farmers’, often through mega-projects based on Public-Private Partnerships (PPPs), like the Southern Agricultural Growth Corridor in Tanzanian (SAGCOT) which has generated contestation against land expropriation (see here). SAGCOT shows the extent to which land grabs have been contested across the African continent and also provides an example of the reaction by agribusiness, which has led corporations and governments to revive and support contract farming schemes (see here). This old alternative to land expropriation is predicated on both exploitation and self-exploitation – without expropriation. At the same time, it avoids the socialisation of labour, and with it the potential for collective action.

Notably collective action of contract farmers is rare and not very effective, although farmers’ associations provide an organisational space for negotiating the terms of incorporation. Corporations can use contract farming schemes to pursue different ends, but ultimately tend to externalise risks onto small scale farmers and perpetuate adverse incorporation in the world market (see here). Rice and sugar have been key crops for both land grabs and contract farming scheme in Tanzania and Uganda. Both crops are water and labour intensive, with attached negative environmental and social patterns of overexploitation of land and water, and exploitation and self-exploitation of rural workers and farmers, with often disproportionate negative effects on women.

The lineages of the dispossessed and their multiple stories of struggles for land repossession are often undocumented and unreported. In the aftermath of a financialized global land rush, we are reminded of the nonlinear nature of dispossession and the non-teleological, non-stagist thrust of Karl Marx’s analysis of primitive accumulation as a prolonged historical process that cannot occur without the active support of the state and the legal system.

Reporting the multitude of untold struggles would probably build a rather different social history of primitive accumulation – one marked by continuous attempts at land repossession. Uncovering and documented rural and urban struggles which often do not make the headlines is one of the many tasks of engaged activist-intellectuals.  Analysing the contradictions internal to these struggles requires a ruthless analysis of their internal contradictions and often leads to pessimism, which requires a sustained optimism of the will.

Not only is the countryside a site of social and political struggles, but many national struggles of historical importance, such as those in North Africa and the Middle East, are firmly rooted in the agrarian question (see here). This is as true for East African countries as it is for Northern African countries and the Middle East. As documented in the case of Tunisia, where permanent unrest and daily strikes are very much a rural phenomenon, especially in oasis locations. In Tunisia, the question of seed sovereignty has been tackled by the state initiative of instituting a public National Gene Bank, which collects, protects and disseminates ancient and disappearing seeds and cultivar varieties all over the country. The often-contradictory ways in which the food question is being addressed in Tunisia underlines that the food question is a class and food sovereignty question. How to provide sufficient, good quality appropriate food for the majority of the population is central to political struggles both urban and rural.

The interventions in Accra on struggle, land and agrarian change converged on the assessment: there is a multitude of social struggles around food, land and water across different countries. Max Ajl discusses these matters further in this interview:

Giuliano Martiniello offers a candid discussion of the challenges of building strong social movements around the food question in African countries in this interview:

How to bridge urban and rural divides and create wider alliances is also discussed by Bettina Engels in this audio interview:

The questions and answers session reflected the multiple and often diverging positions on the nature and future direction of agrarian questions in Africa. Participants noted the persisting marginalisation of pastoralist groups and women in the discussion of agrarian questions. The role of the state in intensifying violence and political repression in rural areas was raised as a key issue for political action. While activists from Zimbabwe reflected on the crucial role of the worker-peasants alliance in the fast track land reform in Zimbabwe, stressing the aggressive international response against land reform, others from Ghana saw as problematic application of Latin American models of food sovereignty to African contexts, and argued that peasants are to be ‘sacrificed on the road to industrialisation’, proposing a second-international view on agrarian transitions as ‘making away with peasants’.

This clearly is not happening in Africa, where the demographic majority is dependent on land and farming – if in more diversified and fragmented ways than was the case until the structural adjustment programmes dismantled state support to farming throughout the 1980s.   Closing remarks focused on the possibilities for auto-centered development at the national level, and how crucial rural-urban alliances among the working poor to create a strong political constituency are to this end.

Elisa Greco is a member of ROAPE’s Editorial Working Group and an expert on the political economy of food and agriculture in Africa. She is a Research Fellow in Agricultural Value Chains at the School of Earth and Environment at the University of Leeds.