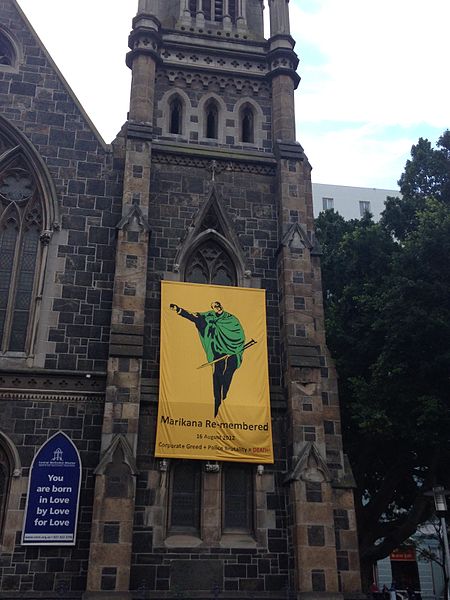 The most well-known worker committee which was created independently from unions in Marikana, South Africa was forged on a mountain where 34 mine-workers were gunned down by police on 16 August 2012.  Luke Sinwell and Siphiwe Mbatha spent two years (from 2012 to 2014) researching the contemporary mine-workers’ movement in South Africa and learned that this was not the only, nor necessarily most important, committee that workers initiated. In their new book, The Spirit of Marikana: The Rise of Insurgent Trade Unionism in South Africa, they detail the creation of an alternative structure which was intended to hold the ‘new’ union, the Association of Mine-workers and Construction Union (AMCU), accountable to the rank and file. The National Union of Mine-workers (NUM) had led hundreds of thousands of workers on strikes in an earlier period of upheaval, but had since become, in Marikana and elsewhere, viewed as an enemy of the workers.  In this contemporary era, many worker leaders believed that AMCU also needed to be driven from below by the rank and file or else it faced the same fate as its predecessor. Exclusive to roape.net the following is an edited extract from their book which briefly explores a short period of time in relation to these monumental developments in modern South African labour history.

By Luke Sinwell and Siphiwe Mbatha

“Despite its significance, many (perhaps most) of the community of Marikana and Lonmin mine had probably not heard of the last committee at Lonmin discussed in this book, the Greater Lonmin Workers Council (GLWC). It appeared to offer an extension of the Mountain Committee, and to hold the possibility of maintaining the priority of mass workers’ control over decision-making processes in the AMCU, in the wake of the strike at Lonmin which ended on 18 September 2012. The council was intended to meet monthly with the three branches of Lonmin, to discuss issues that had arisen. The idea was that branches would give a report to the council, and the council would advise where necessary. The council and the branches would then collectively ‘combine everything and then plan a way forward’. Zakhele, the chairperson of the council, described the logic behind its formation:

the elderly workers like us met and said since we have left [National Union of Mineworkers] NUM and now joined AMCU on our return [to work] from the mountain, it’s now a worker thing. And we thought perhaps had AMCU been there before, people would not have died in the manner they did. And if older guys like us were in leadership, because we have a great deal of experience on the movements in mines, we would have been able to call people in order to talk and agree as leaders. So we decided that even if we are not in AMCU, there is a need for a structure called the Greater Lonmin Workers’ Council that will deal directly with the leaders [of AMCU] and not depend entirely on the union even though we are affiliated to the union. That was how we will be able to monitor the union and hold them to account, you see?

Members of the council had a vast experience as both informal and formal leaders in the mines, including inside the NUM. Most importantly, the members had their fingers on the pulse of the rank and file. Some had even witnessed the rise and demise of the NUM as it became a tool of management. While it was once an ‘insurgent trade union’ acting as an engine of working-class power, it became defunct. But, why did this happen? Zakhele and other founders of the GLWC suggested that one core reason was that it did not have an independent council to ensure it was accountable to the rank and file:

[the] union died because the branches took over and the members were not in control. Yet we have been there for too long and we know what happened …. When I came to the mines in 1981 the NUM was our thing. We fought for it. We walked with [Cyril] Ramaphosa and them, but today they have turned against us.

‘When the NUM left,’ he recalled, ‘we were aggrieved with the R14,000 [per month] the leaders were getting paid. That is what made us not progress and [be] unsustainable because it [exorbitant payment] was being used by management [to prevent workers from having their demands addressed]’. The branches in the mines are clearly the focal point – and arguably the core organisers – of any union at the platinum mines. They therefore play a key role in determining the extent to which a union is driven from below, or controlled from the top down. The GLWC was a response to many years of shortcomings of the NUM branches, which became disconnected from their members, particularly following the transition to democracy.

Unlike the situation at Amplats, the branch committees at Lonmin were elected in 2013 in an extremely hostile environment. Workers and their families were traumatised by the infliction of state violence on 16 August 2012, and with the continuation of violence in the area, levels of fear and distrust undoubtedly reached a plateau. Some of the negotiators following the massacre were already leaders of the AMCU, while other leaders died, were injured and went to hospital, or were accused of murder by the South African state. Based on his communication and involvement with a wide range of worker leaders (both informal and informal), Bheki summarised the process through which the branch committees at Lonmin were elected:

Those comrades after the 22 per cent [was given to the workers], they called a mass meeting in different shaft[s]. Those who are vocal enough, they would come with a list in those mass meetings and say… ‘Here is a list of the people. Here is the chairperson in the shaft committee.’ And call them [the mass of workers and ask], ‘who oppose[s] this’? Tell me at that time who [is] going to oppose this because everyone is afraid? … So all the office [bearing members of AMCU], it was not democratic, it was imposed and even AMCU [NEC] has got no time [to deal with this issue].

Bheki, who attended their meetings and worked directly with the GLWC in an attempt to ensure that it was sustained and empowered to achieve its objectives, further pointed out that there was a strong tension created by what he called the ‘opportunist’ AMCU branch leaders and the GLWC. While the GLWC appeared to undertake a programme which meant they would act as genuine representatives of the workers, the branch officials were not historic leaders of the 2012 strike and were arguably ‘bribed’ by their salaries and prone to taking orders from the AMCU NEC or from management, either of which would serve to undermine and eventually eclipse independent voices.

According to Bheki, the defining feature of the council was its dedication to the workers who had fought and died on the mountain. When the strike ended, workers at Lonmin had heard about the workers’ committee at Amplats, which was independent from union affiliation and more structured than the somewhat elusive committee(s) at Lonmin. When workers decided to end their strike, these older leaders committed themselves to ‘continue and serve the legacy of … all those leader[s] who have fallen. We want justice to be done until the end.’ Bheki who was part of the initiative, further resolved the spirit with which the GLWC sought to move forward:

We want to counsel our [branch] leaders who are in the union [AMCU] now. To understand that they don’t abandon … the thing that happened in the mountain. As much as they will be serving in the union, but they must know that the union was brought here by the blood [of the workers]. So that blood; it need[s] to be take[n] care of.

‘The blood’ here is referring to the spirit of independent militancy which was spilled on the day of the massacre – 16 August 2012. The council viewed the 34, and also those who stood firm on the mountain, as heroic figures who had fought for their rights. It is this spirit which many from outside of Marikana in particular had hoped would become a vanguard of South Africa’s working class…”

This is an extract from The Spirit of Marikana: The Rise of Insurgent Trade Unionism in South Africa (London: Pluto Books, 2016).

Luke Sinwell is a Senior Researcher at the University of Johannesburg.  He is a co-author of Marikana: A View from the Mountain and a Case to Answer, co-editor of Contesting Transformation: Popular Resistance in Twenty-First-Century South Africa and the General Secretary of the South African Sociological Association (SASA).

Siphiwe Mbatha is a co-ordinator of a socialist civic organisation in South Africa called the Thembelihle Crisis Committee (TCC).  He first went to Marikana one day after the massacre in order to provide solidarity to the slain mineworkers.