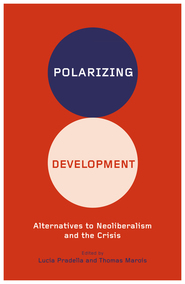 By Andy Wynne and Adefolarin A. Olamilekan

This book is the result of a collaborative research project to try and clarify a Marxist inspired approach to understanding recent developments across the globe, as an alternative to what has been termed ‘new developmentalist studies’.

The book covers both developments in international capitalism, for example the crisis of 2008, and a range of other challenges to the current economic disorder.  The editors recognise that ‘despite being forcefully challenged, neo-liberalism has proven remarkably resilient’. Since its first practical implementation, as part of the brutal US backed Pinochet dictatorship in Chile from 1973, ‘Neo-liberalism has entailed processes of contested socio-economic transformation.’ It has included an increased level of exploitation and higher inequality, for workers and other popular classes, but also increased oppression for women and various ethnic groups.

Guiding themes for the book include a recognition that ‘alternatives must be sought in every day and actually existing struggles’ together with ‘a refusal to accept nation-states as self-contained units of analysis’ and that any alternatives for progressive change must be achieved from below ‘through working and popular class agency.’

Although new developmentalists provide an alternative to the dominant paradigm of neo-liberalism, they ‘ignore the exploitative nature of capitalist production relations’ and so ‘set aside capitalism’s inherent tendency towards social polarisation.’  They also uphold ‘an idealised understanding of the state… that can moderate capitalist development for the overall ‘social good’ and rely ‘on methodologically nationalist assumptions’ which ‘point to the national development successes of East Asia, and more recently China, as the dehistoricised, decontextualized and discrete development models seemingly transferable to all developing countries’, as a result,  the ‘new developmentalists underestimate imperialist relations and capitalism’s tendency towards uneven and combined developments.’

In contrast, the editors of this book recognise a range of concrete strategies and principles which they share with the various authors who write in the volume. This includes the importance of worker-led resistances achieving gains through collective mobilisations, a socialist feminist approach which recognises ‘the need to fight for renewed public services to alleviate the unequal burdens women face day in and day out… the struggle to substantively democratise the public sector’ and for a collective struggle for social and environmental justice.

However, despite largely following a classical Marxist analysis, we consider that the second chapter, by Lucia Pradella, one of the editors, is marred by her references to ‘dependent countries’, ‘unequal exchange between nations’ and ‘the periphery’ to refer to the Global South. In contrast, another chapter by her fellow editor, Thomas Marois, emphasises the importance of the democratic and social control of banking and financial institutions and states clearly that the ‘South is inextricably linked to patterns of global accumulation and to the reproduction of global capitalism.’

The terms used by Lucia suggest her support for dependency theory. This economic theory, popular in the 1970s, considers that the industrial countries are exploiting the countries of the Global South through the unequal mechanisms of international trade. Dependency also includes the wider notions of unequal and exploitative relations between the economic centres of global development and ‘peripheral’ countries.

These ideas flourished in the 1970s when they were originally developed by authors such as Paul Baran and André Gunder Frank. Dependency subsequently gained widespread acceptance though the writings of authors such as Samir Amin and Immanuel Wallerstein.  As one authors in this volume makes clear these ideas are ‘still a reference for scholars, policy makers, and social and political movements in Latin America.’

Many readers may consider that dependency and related ideas are part of the Marxist heritage.  However, we see these theories as a distortion of the Marxist notion of the global exploitation of a universal working class. In this respect, dependency theory is a significant move away from the core Marxist ideas of exploitation by those who control the means of production (factories, workshops, mines etc) and employ labour power.  As such, dependency and related ideas provide a theoretical underpinning for Afro-nationalist ideas. These suggest that Africans of all classes should unite against the exploitation they suffer by the industrial countries of the (predominately) north.

In this volume, Benjamin Selwyn provides a good summary of the differences between strategies of state-led national development (which shares common assumptions with dependency theory and nationalism more generally) and the political economy of labour (or Marxism).  As he points out, state-led development falls into ‘the contradiction where the elite minority advocate the repression and exploitation of the majority in the name of the latter’s benefits.’ Many socialists see national state-led development, with significant areas of the economy under state control, as the only viable way to bring economic development to the Global South and so the first stage towards socialism. But as Selwyn argues, contemporary China illustrates the clash between state-led development and its ‘industrialisation … based upon intense exploitation and repression of its vast industrial working class as source of business profits.’

Going back to the writings by Karl Marx, Selwyn argues that workers and peasants in the South should collectively resist their exploitation and not rely on an elusive ‘trickle-down effect.’  He could have gone further to point out that neo-liberalism has led to a huge increase in inequality within countries like Brazil, Nigeria and South Africa.  National development in these countries has meant the economic development of a local elite rather than an improvement in the living standards of the majority of the population.

Andreas Malm considers climate change, arguing that ‘on a global scale, the CO2 explosion is running its course towards biospheric meltdown.’ Increasing emissions of climate change gases mean that average world temperatures are likely to increase by more than four degrees within the next 50 years. It will require, as Malm argues, a mass movement to avoid this disaster.  It is only such a movement, with the working class at its heart that has the potential power to stop global warming and the material interest to do so.  Capitalists will continue to profit from fossil fuel exploitation as long as they can, unless there is a counter-hegemonic movement that can block them.

ROAPE member, Baba Aye, writes in the book that Africa has seen significant economic development since independence.  Nigeria, for example, has experienced sustained economic growth of 6 – 7 percent a year over the last decade. The majority of the population are now urban based and ‘nodes of industrialisation now exist alongside localities with poor productive capacities.’  However, the majority of the population still live in abject poverty and their lives often remain nasty, brutish, and short. There is, Baba Aye writes, an undercurrent of the ideas of state-led development or Keynesianism in the new administration of Buhari in Nigeria. This ‘project’ seeks to use state resources from reduced elite corruption to significantly increase the budgets for education and health and to introduce a minimal social wage for the poorest 25 million.

Yet the organized working class and the wider poors are still knocking at the door.  Most dramatically with the Egyptian revolt and overthrow of Mubarak in early 2011, but also with the 2012 Marikana massacre in South Africa and the January 2012 uprising in Nigeria.  These are just the high points, Baba Aye argues, of a mass strike wave that is continuing to reverberate across the continent.

These social movements will determine the struggle, for example, in Nigeria where a new reformist government is facing economic pressures to make the poor pay for the declining price of oil exports. There are proposals to reduce the already pitiful minimum wage and remove the fuel subsidy.  The outcome of these struggles depends, as in the past, on whether the trade union leaders are yet again able to lead a wider social movement.  This will be needed to reduce the fantastic inequality within Nigeria, but also the real and terrible unevenness that exists between West Africa and Europe.

This book is far from the finished product, but raises a wide range of issues which should be discussed and researched in greater detail.  The editors have successfully brought together a wide range of scholars, broadly working within a radical and often Marxist tradition. Many of the authors are creatively adapting the traditional tools to the current challenges of global inequalities within as much as between countries, to tackle issues such as climate change and the changing nature of imperialist competition. The global reach and non-sectarian approach of the authors provide an accessible introduction to the continued and creative power of Marxist analysis, when wielded in an open and inclusive direction.

The imperative of development for the working and other poor peoples should be emancipatory, many of the authors demand. Liberation from want is essential to this. With the great increases in global wealth now available, no human being should lack the basics of modern life. But development cannot also be reduced to ‘stomach infrastructure’ – emancipation entails freedom fought for, won and defended as an integral part of development, by working people.

Our pathway to such emancipatory development must include demands such as: ‘No to privatization!’, ‘No to deregulation!’, ‘No to commodification!’, ‘Yes to payment of salaries regularly’, ‘For free qualitative and compulsory education and quality health for all!’.  With demands such as these we must build social movements from below to challenge the capitalist state, in its various configurations. This volume will help to clarify many of the challenges we face.

Andy Wynne is a Senior Lecturer in Public Financial Management at the University of Leicester and a consultant who has worked extensively in West Africa. Adefolarin A. Olamilekan is development researcher based in Abuja, Nigeria.