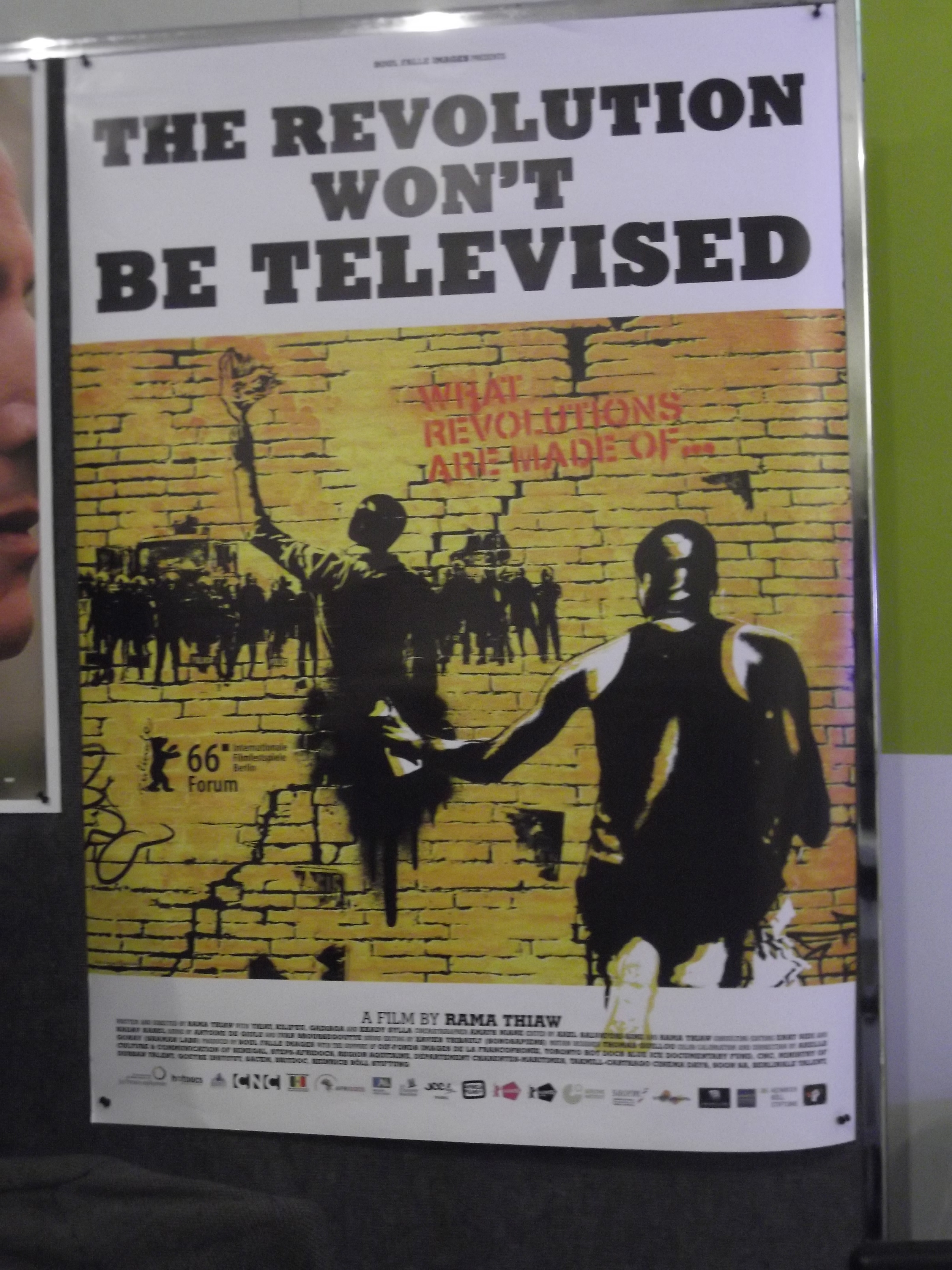 ‘The revolution won’t be televised – the revolution will be live.’ Gil Scott-Heron’s famous 1970 poem has been given a new lease as the title of an extraordinary new documentary by Rama Thiaw. The Senegalese director’s second feature-length film recently premiered during the 66th Berlin International Film Festival (Berlinale) to excited acclaim.

Thiaw tells the story of the ‘Y’en a marre’ movement that rose up in Senegal against octogenarian President Abdoulaye Wade’s attempt to clinch to power in 2012. Y’en a marre translates as ‘enough is enough’, or – even more to the point – ‘we’re fed up’. The movement was started by musicians Thiat and Kilifeu, and some of their friends. This was the first West African revolution led by rappers (more recently Y’en a marre’s act was followed by the Burkinabe ‘Balais Citoyen’ movement, led by musicians Sams’K Le Jah and Smockey, that swept Blaise Compaoré out of office in 2014 after 27 years). Rap and new popular protest movement politics make for a fast-paced sequence of meetings, campaigns, concerts, marches, arrests, travel, taking the viewer through the streets of Dakar, to the provinces of Senegal; to Burkina Faso, to the grave and the living history of Thomas Sankara, through music and politics and meetings in university buildings where hardworking old fans cut the thick hot air above. Y’en a marre’s is an exhilarating story of new democracy movements, of a new generation of Africans who are fed up with old men who persist on their claim to autocratic power. A documentation of its story was, more or less, what I expected when I queued up at the Berlinale main movie site on a rainy, cold February night.

I have to confess upfront: The film far exceeded my expectations. Yes, Rama Thiaw follows the rappers and the movement, the self-declared grandsons of Cheikh Anta Diop and sons of Thomas Sankara. She explores the tension and the conflicts between music and politics, the streets and the state, the old, and old-style politicians and the young protesters who emphatically decry power: ‘We are not politicians’, they say, and ‘we are a new type of Senegalese’ who want more than just a change of political leadership; ‘we need a new system’ the rappers declare after newly elected President Macky Sall visits the Y’en a marre headquarters, a run-down old house in Dakar.

Here a new space has opened up for politics as much as for sleeping, Nintendo games, and moving gestures of friendship between the – mostly male – activists of the emerging youth protest movement. Thiaw who has spent years with Y’en a marre from their inception shows the rappers and their environment with an amazing intimacy. The rapper-activists are shown in their everyday life, in their full, loving, fragile humanity. They doubt, find spiritual solace at the beach, argue with each other, let one other and the audience see their vulnerabilities, their emotional and physical exhaustion as much as their conviction, their determination, and their longing for new beginnings. Thiaw’s draws a stirring portrait of a country – and a region – in the grip of change. She also shows, in the most poetic and most intimate, even tender ways possible, a new generation of youthful African activists and their ways of speaking to the world, addressing it from an Africa, which is at the centre of global political and cultural movements.

The film’s extraordinary poignant powers and poetics rose also during the discussion that followed the world premiere in Berlin, where Rama Thiaw shared the stage with Thiat and Kilifeu. The roots of this stirring, intimate portrait are deep, drawing on the extraordinary trust between the director and the main protagonists, who had not even seen the final cut of the film before the first night. Thiat called Thiaw a “visionary modern story teller”, whose work had really complemented their political and musical desires. This is a remarkable story told from the inside.

Thiaw, on her part, significantly spoke about her motivation to make the film. Born in 1978, she had been part of the generation that had brought Abdoulaye Wade to power with the resurgence of the Senegalese student movement in the late 1990s. She wanted to tell a story of different generations of activists, bridging the inspirational histories from the 1950s and 1960s, the 1990s, and the most recent wave, embodied in Senegal in Y’en a marre. The film is fittingly dedicated to Khady Sally, the great Senegalese cineaste, who died in 2013.

Heike Becker is Professor of Anthropology at the University of the Western Cape, where she directs research and teaching on multiculturalism and diversity.