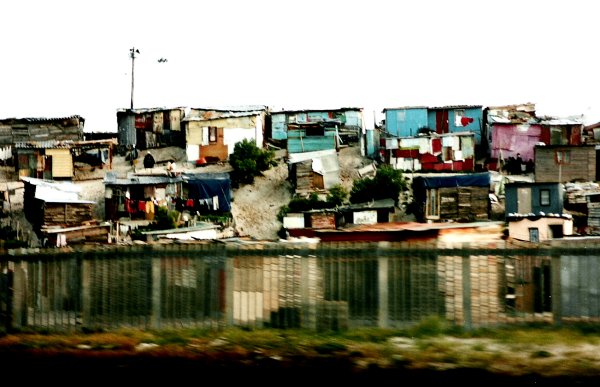 ‘South Africa can claim to have one of the world’s most redistributive public purses,’ argues Johannesburg Business Day newspaper associate editor Hilary Joffe, drawing upon World Bank research findings. This nonsense. The Bank’s silences about poverty and inequality speak volumes.

To illustrate this in next-door Lesotho, Stanford University anthropologist James Ferguson’s famous book The Anti-Politics Machine criticised the World Bank’s 1980s understanding of Lesotho as a ‘traditional subsistence peasant society.’ Apartheid’s migrant labour system was explicitly ignored by the Bank, yet remittances from Basotho workers toiling in mines, factories and farms across the Caledon River accounted for 60 percent of rural people’s income.

Ferguson explained: ‘Acknowledging the extent of Lesotho’s long-standing involvement in the modern capitalist economy of South Africa would not provide a convincing justification for the ‘development’ agencies to ‘introduce’ roads, markets and credit.’

Using Michel Foucault’s discourse theory, Ferguson showed why some things cannot be named. To do so would violate the Bank’s foundational dogma, that the central problems of poverty can be solved by applying market logic. Yet the most important of Lesotho’s market relationships – exploited labour – was what caused so much misery.

Three decades on, not much has changed. Today, the Bank’s main South Africa research team reveals a similar “Voldemort” problem. Like the villain whose name Harry Potter dared not utter, some hard-to-hear facts evaporate into pregnant silences within the Bank’s latest ‘South African Poverty and Inequality Assessment Discussion Note.’ Bank staff and consultants are resorting to extreme evasion tactics worthy of Harry, Ron and Hermione.

The Bank’s point of view

From the Bank’s viewpoint: ‘South Africa spent more than other countries on its social programs, with this expenditure successfully lifting around 3.6 million individuals out of poverty (based on US$2.5 a day on a purchasing power parity basis) and reducing the Gini coefficient from 0.76 to 0.596 in 2011.’

Ahem, this is worth unpacking.

1) ‘Spent more than other countries’? Of the world’s 40 largest economies, only four – South Korea, China, Mexico and India – had lower social spending than South Africa, measured in 2011 as a share of Gross Domestic Product (GDP).

2) ‘Millions lifted out of poverty?’ In fact many millions have been pushed down into poverty since liberation from apartheid in 1994. Unmentioned is poverty that can be traced to neo-liberal policies such as the failed 1996-2001 Growth, Employment and Redistribution plan co-authored by two Bank economists, which made South Africa far more vulnerable to global capitalist crises.

The Bank’s South Africa poverty line was $2.5/day in 2011, the date of the last poverty census. In contrast, the official state agency StatsSA found that food plus survival essentials cost $124/month or about $4/day that year, and the percentage of South Africans below that line was 53 percent. (University of Cape Town economists argued convincingly that StatsSA was too conservative and the ratio of poor South Africans is actually 63 percent.)

For a net 3.6 million people, i.e. more than 7 percent of South Africans, to have been ‘lifted out of poverty’ is plausible only if the Bank’s much lower $2.5/day line is used. But by local standards, the number of poor people has soared by around 10 million given the rise of 15 million in population since 1994.

3) The Bank adjusts the Gini Coefficient (measuring income inequality on a 0-to-1 scale) ‘from 0.76 to 0.596’ by including state social spending that benefits poor households. But here another silence screams out. The Bank dare not calculate pro-corporate subsidies and other state spending that raise rich people’s effective income through capital gains.

Such wealth accruing through rising corporate share prices is enjoyed mainly by richer people when companies benefit from new, state-built infrastructure in their vicinity. Also ignored by the Bank, radically lower corporate taxes (from 48 to 30 percent) mainly benefit the rich in the same way. (Until the mining industry’s post-2011 crash, South African firms’ after-tax profits have been among the world’s very highest, according to the International Monetary Fund in 2013.)

Indeed the Treasury’s single biggest fiscal policy choice has been to condone ‘illicit financial flows.’ These escape through bogus invoicing and other tax avoidance strategies. The Washington NGO Global Financial Integrity recently estimated they cost South Africa an annual $21 billion from 2004-13, peaking in 2009 at $29 billion. The Bank dare not mention these flows or the resulting capital gains enjoyed by South African shareholders.

Capital gains are extremely important in raising the wealth levels of those who are already wealthy. To illustrate, the United States Congressional Budget Office calculated that, in 2011, the share of total US income from capital gains enjoyed by the top 1 percent of earners was 36 percent; for the bottom 95 percent it was only 4 percent.

But the Bank evades vital details, such as how ‘free basic water’ was piloted in Durban in 1999 before becoming national policy in 2001. After a tokenistic 6 free kiloliters (kl) per month, the price of the second block of the water within the tariff was raised dramatically (in Durban and most municipalities). Overall, by 2004 the price had doubled. In response, the lowest-income third of households lowered monthly consumption from 22kl to 15kl, while in contrast, the highest-income third cut back by just 3kl/month, from 35kl to 32kl (they enjoy home swimming pools and English gardens). The Bank turned a blind eye.

5) Another unmentionable concerns the Bank’s largest-ever project loan: $3.75 billion granted in 2010 for the corruption-riddled, oft-delayed Medupi coal-fired power plant, the biggest now under construction in the world. Repayment of that loan plus other financing has hiked the price of electricity to poor people by more than 250 percent since 2007.

But neither the loan, the borrower, the project nor the soaring price of electricity are mentioned. Nor are Eskom’s special pricing agreements with the mining mega-corporations BHP Billiton and Anglo American, that cut electricity prices to a tenth as much as what poor households pay.

6) The Bank applauds a grant that ‘now reaches 11.7 million children. Grant payments have risen from 2.9 percent of GDP and now amount to 3.1 percent.’ But a meagre 0.2 percent of GDP suggests the amounts provided are tokenistic. The child grant of just $21/month is about a third of today’s StatsSA poverty line.

Another example, education, the single largest budgetary commitment, illustrates how dubious the alleged social spending benefits for recipients can be. Most public schools produce extremely low-quality education, thus locking in inequality with regard to life chances.

The World Economic Forum’s Global Competitiveness Report 2015–16 rated South African education as the worst of 140 countries in terms of science and mathematics training, and 138th in overall quality. As local expert Nic Spaul remarked after studying the 1994–2011 outcomes: ‘South Africa has the worst education system of all middle-income countries that participate in cross-national assessments of educational achievement.’

It’s not just class that plays out in educational inequality, but also race. The Organisation for Economic Cooperation and Development observes that ‘in 2008, only 1.4 percent of working-age Africans held a [university] degree, compared to almost 20 percent of working-age Whites. This proportion for Africans has hardly increased since 1993, while the proportion for Whites has grown by 5.4 percent.’

Given such outcomes, it could just as easily be argued that inequality is amplified by the manner in which public education is provided to the low-income majority. This story is fairly typical of maldistributed state resources. As senior Treasury official Andrew Donaldson acknowledges, ‘In areas such as education, health care and urban transport, service provision tends to evolve in differentiated ways […] the result is a fragmented, unequal structure in which the allocation of resources and the quality of services diverge.’ Combined with semi-privatised systems, such public spending, he admits, ‘entrenches inequality between rich and poor.’

Other areas of state spending have similar biased effects, but the Bank simply does not consider large chunks of South Africa’s budget, e.g.:

The South Africans who cannot be named

The most cited scholarly research about post-apartheid exploitation is by local political economists like Sampie Terreblanche, Hein Marais, William Gumede and Gillian Hart – but the Bank dare not reference these books.

To truly tackle poverty and inequality, only one force in society has unequivocally succeeded since 1994. That force is the social activist.

Their successes include raising life expectancy from 52 to 62 over the past decade (thanks to AIDS medicines access), reversing municipal services privatisation, cutting pollution and raising apartheid wages. But the organisations responsible – such as the Treatment Action Campaign, Anti-Privatisation Forum, South Durban Community Environmental Alliance and trade unions – are also, from the Bank’s viewpoint, South Africans who cannot be named.

As the pernicious influence of the World Bank researchers’ project grew in the past year, with numerous citations of their dubious data, I queried the work and received a series of (ultimately bureaucratic, denialist) emails from its officials.

Fortunately, upon asking the main Bank inequality consultant, Nora Lustig of Tulane University, why more accurate assessments of the state’s pro-corporate fiscal benefits were not attempted so as to offset the bias from only considering social spending, she took up the challenge with honesty: ‘Your questions are very valid. Regretfully, we have yet to figure out a solid methodological approach to allocate the burden/benefit to households of the list of interventions you list.’

And regretfully, the Pretoria regime’s pro-rich interventions continue, even though extreme pressure has recently arisen from credit rating agencies to reduce social spending, following a 2015 Budget that cut the real value of welfare grants by at least 4 percent. Much worse austerity is anticipated in the 2016 budget, to be announced on 26 February.

So beyond the flaws in measurement, the main risk of the World Bank research on South African inequality is its ghastly political bias. If the alleged improvements to poverty and inequality rates are accepted by the ruling elite as valid, their tendency to cut social spending on (bogus) grounds that already, ‘South Africa can claim to have one of the world’s most redistributive public purses’ is that much more tempting.

Resistance is bubbling up everywhere but the realm of ideologically poisonous research cannot be avoided.

Patrick Bond teaches political economy at the University of the Witwatersrand in Johannesburg and directs the University of KwaZulu-Natal Centre for Civil Society in Durban. A version of this blog was published on the CounterPunch website.