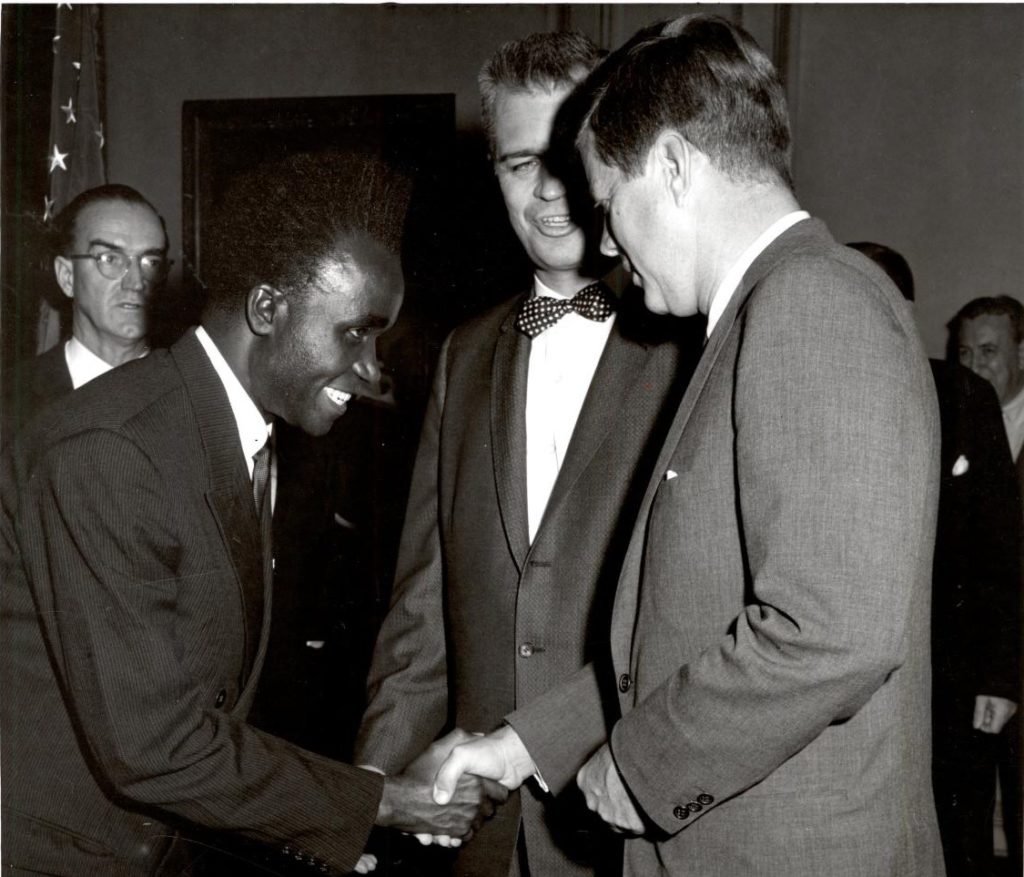 On the anniversary of Zambia’s independence, Robert Power examines the birth of the Zambian nation by shedding light on the connections that existed between political activists and anti-colonial organisations and governments that proved so vital in winning the liberation struggle in 1964. Power writes about the astonishing transnational connections and solidarity that proliferated from the early 1950s.

When reflecting on the achievements of liberation movements in Africa, it is all too easy to regard their achievements as a product of the context in which they were operating. The notion of ‘pushing at an open door’, which had ostensibly been opened by the United States, essentially leaves the lingering impression that political activism took place within a binary framework: mobilisation and activism ‘on the ground’ and projection of popular support to the colonial metropole in order to expedite independence. Whilst more recent scholarship, and I allude to Andrew Cohen’s study, ‘The Failed Experiment of the Central African Federation’, have endeavoured to shift the focus from power politics, few studies have examined the extent to which liberation movements themselves helped feed into, and in some cases even mould, the international political dispensation then materialising. Closer scrutiny of evidence, however, reveals a complex and intricate network of transnational connections proliferating in the early 1950s that exercised a decisive, and lasting, impact upon African politics.

In 2006, Kenneth Kaunda, former leader of the United National Independence Party commented that he owed the achievement of Zambian independence not only to the Zambian ‘people’, but to ‘our supporters elsewhere’. This was an interesting remark, especially given KK’s centrality to the liberation struggle. So, who, then, were these supporters ‘elsewhere’ and what role did they play in the Zambian liberation struggle?

The political activism of the Zambian African National Congress did much to raise attention to the discriminatory racial policies of the British Colonial Office in Central Africa in the early 1950s. Whilst the imposition of the Central African Federation couldn’t be prevented, the campaign against the scheme which placed African advancement in the hands of white settlers resulted in the acquiring of support from influential anti-colonial campaign groups that were to prove vital in establishing the ANC as a political party. It also marked a shift away from more traditional campaign methods – isolated, regional, protests and negotiation – in favour of large-scale boycotts, non-cooperation, and, crucially, cultivation of powerful external forces likely to exercise significant influence on the situation materialising in Northern Rhodesia.

The Internationalisation of the Anti-Federation Struggle

Coming soon after an acrimonious split in the ANC in October, the All-African Peoples Conference, held in Accra in December 1958, marked a significant turning point for political activists. Whilst marginalising ANC President Harry Nkumbula, holding him responsible for the split, Kenneth Kaunda’s newly formed Zambia African National Congress emerged from the Conference as the preferred interlocutor of Northern Rhodesia’s problems. It was perhaps unsurprising, therefore, that following the banning of ZANC in March 1959, it was only by virtue of the moral, financial, and practical assistance given to former ZANC activists by external supporters that momentum was sustained behind the anti-Federation struggle. Soon after the formation of the United National Independence Party from the embers of ZANC in October of the same year, support from British anti-colonialists provided UNIP leaders, most of whom were former ZANC luminaries, a decisive, early, boost. Not only did it serve to legitimise UNIP’s ‘national’ programme, but it proved that the struggle against colonialism and racial discrimination could not be won alone.

UNIP’s international campaign began initially with a view to replicating party organisation in Northern Rhodesia abroad. Appointed by his brother, Sikota, as UNIP’s representative in the United States in early 1960, Arthur Wina emphasised the need to establish a ‘solid administrative entity’ overseas with a view to uniting all Zambians in the struggle for independence.[1] UNIP embarked upon a diplomatic offensive in 1961, despatching senior party representatives to establish party branches in key locations.[2]  The aim was to ‘draw the widest attention’ to the plight of Africans in Northern Rhodesia in the hope that foreign governments might lend financial support and diplomatic assistance to enable UNIP to fight federation using democratic means.[3]

Much can be said of the extent of the sophistication and strategy of the campaign upon studying the documentary evidence (which can now be viewed online as part of the British Library Endangered Archives Project). The party’s approach differed according to the political sensibilities of the countries in which representatives operated. By appealing to the American government, and American anticolonial organisations, for instance, UNIP went to great lengths to temper its appeal, emphasising the ‘sensible’ credentials of the party.[4] When Kaunda petitioned the US government to intervene during a spate of riots that broke out in the summer of 1961, Kaunda deliberately played up UNIP’s commitment to democratic credentials, imploring, in the name of God and humanity, to raise the matter at the UN and the Prime Minister Harold Macmillan directly. Such an approach stood in stark contrast to requests made for assistance during the Belgrade Conference in September.

Impact of UNIP’s International Campaign on the Struggle for Independence

By 1962, UNIP had largely succeeded in achieving the goals set out by party leaders. Not only had the party improved its economic position, giving leaders great confidence in claiming for themselves the national dispensation then materialising, but the activities of party representatives helped forge links with powerful pan-African and international figures. These networks provided UNIP with an enhanced international status, giving greater exposure to the liberation struggle. Links with Julius Nyerere’s Tanganyikan African National Union, for instance, proved especially important. Not only did TANU provide UNIP with resources to assist UNIP’s mobilisation campaign at home, but Nyerere’s prominence in pan-African affairs helped win for Kaunda the Presidency of the Pan-African Freedom Movement of East, Central, and Southern Africa in February 1962. It was arguably this status that gained Kaunda an audience with the UN Committee of Seventeen in New York in April. There, he was able to draw attention to the protracted battle for greater constitutional rights in Northern Rhodesia.[5] Representatives from Tanganyika, India, Ethiopia, Tunisia, and the USSR were unanimous in their support for UNIP after Kaunda’s speech. Just four weeks later, the UN Special Committee on Colonialism approved a motion in favour of calling for immediate independence in Northern Rhodesia by 12 votes to 4.[6]

The focus of the UN spotlight on the Federation gave rise to increased American interest. Having initially remained ambivalent to criticism of Britain’s policy in the region, by October 1962 the American government appeared to soften its attitude towards the idea of accelerated African advancement that would eventuate in independence.[7] The change in position undoubtedly owed much to the anti-colonial climate prevailing in the UN, but whether such changes would have occurred without UNIP’s initiatives is debatable. Having paid close scrutiny to publicising Northern Rhodesia’s problems, and having visited the US several times between 1960 and 1963, Kaunda successfully created for himself and his party the image of a popular, and moderate, politician with whom the West could cooperate.[8] A story in Life magazine in May 1960 portrayed him as a patriotic practitioner of democracy likely to become the first leader of an independent Zambia.[9] This endorsement from Life publisher Henry Luce, a strident anti-communist, provided instant credibility for Kaunda. It was this image that won him influential allies who were then able to lobby his cause in the highest of political circles. Whilst anxieties pertaining to UNIP’s ‘lack of experience’ were not altogether dispelled, UNIP’s moderation and progressiveness was a source of optimism to sceptics.

The intention here has been to provide a brief snapshot of what became an expansive and complex network of connections that a small number of progressive, internationalist, UNIP political activists were able to cultivate within a short space of time. By placing the struggle against racial prejudice and federation within such a context, it is suggested that much can be learned from the lessons of the past. Futures can indeed be won, and lost, through an approach which transcends the narrow parameters of the nation state. For UNIP, winning support of the UN and influential lobby groups in the US played a key role in increasing the party’s credibility, allowing UNIP leaders to frame the anti-federation struggle in an exclusively UNIP context. In turn, the support received not only improved UNIP’s domestic position, in practical and moral terms, but it also helped the party apply yet more pressure upon the British to concede to UNIP’s secession demands. For the party’s main rival, Harry Nkumbula’s ANC, it was very much a case of a future ‘lost’. Whilst the party continued to function domestically, its international standing reduced the capacity of the party to win support elsewhere. Subsequently, its ability to function on a national level was severely compromised. Attracting international support was not simply a matter of affecting decidedly international, in this case anti-colonial, considerations, it directly impacted upon the fortunes and future of the Zambian people too.

Rob Power is a historian specialising in the history of modern Africa, dealing in particular with the history of decolonisation and African liberation movements. He teaches at the Department of International History at the London School of Economics and Political Science.

[6] Cohen, A., ‘A difficult, tedious and unwanted task’, Representing the Central African Federation in the United Nations, 1960-1963’, p.116. Voting in favour were Cambodia, Ethiopia, India, Mali, Poland, Syria, Tanganyika, Tunisia, the USSR, Venezuela, and Yugoslavia. Opposing were Australia, Italy, Britain, and the US.