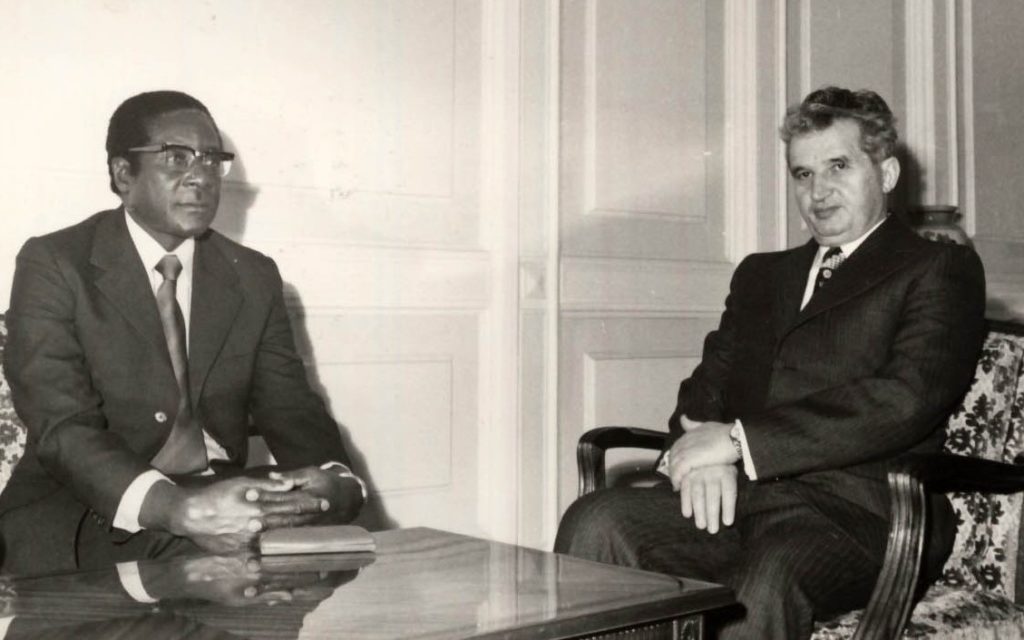 David Moore reflects on Robert Mugabe’s life, politics and ZANU-PF. He sees Mugabe’s rule containing a blend of stultified Marxism and liberalism – a kind of ‘market Stalinism’. Discussing the coup that toppled Mugabe in 2017, Moore sees continuity in Zimbabwe’s liberation history. He asks, to what extent is this constant history of near-coups and coup-paranoia wired into the very structures of Zimbabwe’s political sociology and culture of class and state formation?

The outpouring of reflections and commentary on Robert Mugabe’s death – it even made the New Yorker, which commented on the continent-wide implications for ‘democracy’– nearly two years after his presidency of Zimbabwe passed away,[1] has been mixed but dominated by predictable statesmen-like glorification. This author’s catalogue of condemnation may have been too severe, given Zimbabwe’s many diplomatic and cultural proscriptions regarding discussing the dead. Perhaps South Africa’s past-president Thabo Mbeki’s was most hagiographical, thus rendering severe criticism even from within the ‘triple alliance’ that is purported to govern that country.

The most remarkable aspect of Thabo Mbeki’s praise-singing was his forgetfulness: just eighteen years ago, as Zimbabwe’s never-ending crisis was beginning to hit hard, he wrote a 26-page screed for the ANC’s consumption that condemned Mugabe roundly.[2] For a ‘scientific-socialist’ schooled in the dialectics between Sussex and Leningrad, there can be no insult greater than accusing one’s political peers of being reduced to reliance on the ‘lumpen-proletariat’ for political support. But for the multi-staged attempt at the National Democratic Revolution and how Zimbabwe’s revolutionary party had failed it, one might have been reading an International Monetary Fund/World Bank guide to good economic governance. Furthermore, it ended on a note praising the bracing effect of free and fair elections, around the corner in 2002.

The advisory note (did anyone with power in Zimbabwe read it?) may have been a result of Mbeki’s concurrent efforts to bring Nepad (a new economic partnership for African development replete with a begging bowl for US$64 billion, seemingly dormant now) and an immersion in neo-liberal political economy for the continent as well as at home. It may also serve as an example of what happens when a certain form of stultified Marxism blends with an equally blunt liberal terrain (Boris Kagarlitsky called this ‘market Stalinism’). No matter: it did not last long. When the 2002 presidential elections took place amidst lots of violence and underhandedness, Mbeki’s government did its best to hide its own observations teams’ analysis. It took a dozen years for the courts to release the report of Mbeki’s second team, sent to Zimbabwe to investigate his first observer groups’ regime-friendly findings. The Khampepe Report confirmed that the elections were far from free or fair.

Shortly before the court’s release of the news about the South African analysis of the 2002 elections, Mbeki was back on the cultural imperialism track. Perhaps in 2001 he had been subjected to the syndrome in which ‘we, as Africans, don’t know enough about ourselves and continue to be enslaved by a narrative about ourselves told by other people’ (in his case, two ‘foreign ideologies’ stirred into an unpalatable NDR stew). Zimbabweans, he said, were on ‘the frontline in terms of defending our right as Africans to determine our future, and they are paying a price for that’. By 2018, however, Mbeki was turning to the NDR once again to bemoan the ANC’s promotion of land expropriation without compensation: that, he wrote, recalled ‘the circumstances of the formation of the PAC in 1959!’, and ‘in reality … the ANC accepted the leadership of the EFF!’ (The Economic Freedom Fighters in South Africa veer perilously close to fascism at times: perhaps the label ‘authoritarian populism’ is more appropriate and nuanced.[3]) When discussing other African ‘settler-colonial’ countries with different ways of dealing with relocated Europeans he included Algeria, but not Zimbabwe.[4] His eulogies for Mugabe now seem to put him in the EFF camp.

The celebratory notions of ‘international’ solidarity between powerful friends soon washes up on the rocks of an equally denuded notion of cultural integrity and sovereignty. No wonder Mugabe had friends all over: when he said to Tony Blair (and his ‘gay gangsters’) that he should keep his England and Mugabe would keep his Zimbabwe, he encapsulated a moment of feudalism transfused with an anti-imperialism born more of psychological insult than political economy clarity. That resonated with his erstwhile comrades across the continent and indeed what used to be called the ‘third world’.

Toward the ‘real story’

However, this is not what intrigued me about Mugabe’s departure from this mortal coil. I happened to be working in fits and starts on a book about the November 2017 ‘coup’, during which one faction – deeply embedded in ZANU (PF)’s ‘securocrats’ – forced him to retire. The group’s premise was that the faction surrounding him and his possibly presidentially bound partner, Grace, were criminals who had to be removed from his environs. When they were gone, though, the ‘Lacoste’ faction (its leader, now President Emmerson Mnangagwa) decided to push Mugabe all the way out. Thus their dominance of the party and its state (including, of course, recalcitrant elements in the sections of the security forces – especially the ‘civilian’ intelligence apparatuses and the police – that found themselves on the losing side of the ‘militarily assisted transition’), would be ensured.

What struck me at the moment of the coup was that it was nothing new: it fit into a long history of violence-laden struggles for power within Zimbabwe’s nationalist movements and parties – especially the party that still rules today.

At its starting point in 1963, when what is now ZANU (PF) (Zimbabwe African National Union-Patriotic Front) split off from the ‘founding nationalists’ in ZAPU (Zimbabwe African People’s Union), there were many bricks and stones thrown and fires lit at the homes of politicians of any stripe. Even before that in the trade unions, those on the wrong side of the East-West divide were labelled ‘sell-outs’ promiscuously and beaten to the verge of death.

In the seventies during the liberation struggle, generational and ideological challenges to the ‘old guard’ leaders were quelled with arms by the leaders of status quo nationalism seeing any – especially intellectual – challenge as tantamount to treasonous coups sponsored by imperialists (or less openly, attributed to ethnically based power grabs). The ‘imperialists’ – a catchall phrase including ‘social imperialists’, the Maoist-inspired label for those from the Soviet Union who might have thought they were just the peoples’ representatives abroad, as well as the Rhodesians, the British, the Israelis, and the Chinese too, for the ZAPU side of the fence – took on a lot of blame for struggles with indigenous roots. Archival digging and interviews have unearthed much evidence about these moments.[5]

The eighties were marred by the genocidal massacres of Gukurahundi, which also carried the carnage of the Cold War with it. Questions about the degree to which Zimbabwe’s new rulers utilised the ‘west’s’ infatuation with Soviet influence and fears that a ZAPU-ANC (South Africa’s African National Congress, seen by many Cold Warriors as a USSR proxy) are still asked, not least by those haunted by the many thousands of deaths in Matabeleland and the Midlands for which ZANU (PF) is responsible.[6]

As the structural adjusted 1990s took over Zimbabwe after the fall of the Berlin Wall, the invasion of liberal democracy (perhaps ironically, on the back of increasing trade union struggles) amidst economic decline and the rise of the ‘war veterans’ struck fear into the ruling party: again, the Movement for Democratic Change became the puppets of the British Labour Party á la Tony ‘Bliar’: student leaders (still, often, adherents to the International Socialist Organisation) were beaten while MDC supporters were tortured and killed by the hundreds.

The intra-party ‘coup’ (the use of that nomenclature is contested, because the soldiers kept quite close to constitutional lines, which in any case were bound to be interpreted loosely by hand-picked courts and international actors happy to see Mugabe go by any means necessary) was only the clearest example of a syndrome that had been simmering to a boil since at least 2014 when one vice-president Joice Mujuru, was chased out of office chillingly, just three years since her powerful husband Solomon had been killed and burnt, or vice versa, ‘probably.’ It was a petit coup, but the number of soldiers involved indicates immediate readiness had something gone wrong. Furthermore, ‘official’ estimates of the dead (one or two Israeli ‘security guards’ at a cabinet minister’s home) are probably low.

The recent history of Zimbabwe’s ‘post-Mugabe-and-MAT (military-assisted-transitions) moment’ is one of escalated continuity in this regard. Just after the mid-2018 elections, six protestors and innocent bystanders were killed in political demonstrations about slow ballot counting.[7] January 2019, seventeen murders and the same number of rapes, plus hundreds of beatings, during demonstrations that went awry after an unprecedented fuel price rise. ZANU (PF) has taken renewed delight in pointing blame towards foreign NGOs and their proxies: in advance of widely anticipated demonstrations in mid-July, the state newspapers announced the miraculous discovery of a nefarious Serbian-led group of regime-change puppets. On the return of some of them from meetings in the Maldives, seven were arrested and charged with treason. This will be déjà vu for those who were student activists in the early 2000s.[8]

The questions needing answers are: first, to what extent is this constant history of near-coups and/or coup-paranoia wired into the very structures of Zimbabwe’s political sociology and culture of class and state formation?; second, did Mugabe, in a somewhat, but never truly consolidated Bonapartist mode, hasten or slow down these tendencies?; and third, will these tendencies – exacerbated by a stalemated battle between corrupt cabals and weak neo-liberals (further enfeebled by the authoritarian political blunders that have evaporated the international – especially British – welcoming the coup initially), and flowing down to the frustrated and very poor lower ranks among the soldiers – lead to ZANU (PF)’s and thus Zimbabwe’s implosion?

Mugabe managed all these contradictions until he was too old to hold on to them. Aprés Mugabe: les deluges?

[2]  Thabo Mbeki, ‘How Will Zimbabwe Defeat Its Enemies? A Discussion Document,’ African National Congress mimeograph, July 10, 2001, republished with some changes in ‘The Mbeki-Mugabe Papers: A Discussion Document’, (not for publication or distribution) August 2001’, New Agenda, 2nd Quarter (2008). The paper is discussed in my ‘A Decade of Disquieting Diplomacy: South Africa, Zimbabwe and the Ideology of the National Democratic Revolution, 1999-2009’, History Compass, 8, 8 (2010), 752-67.