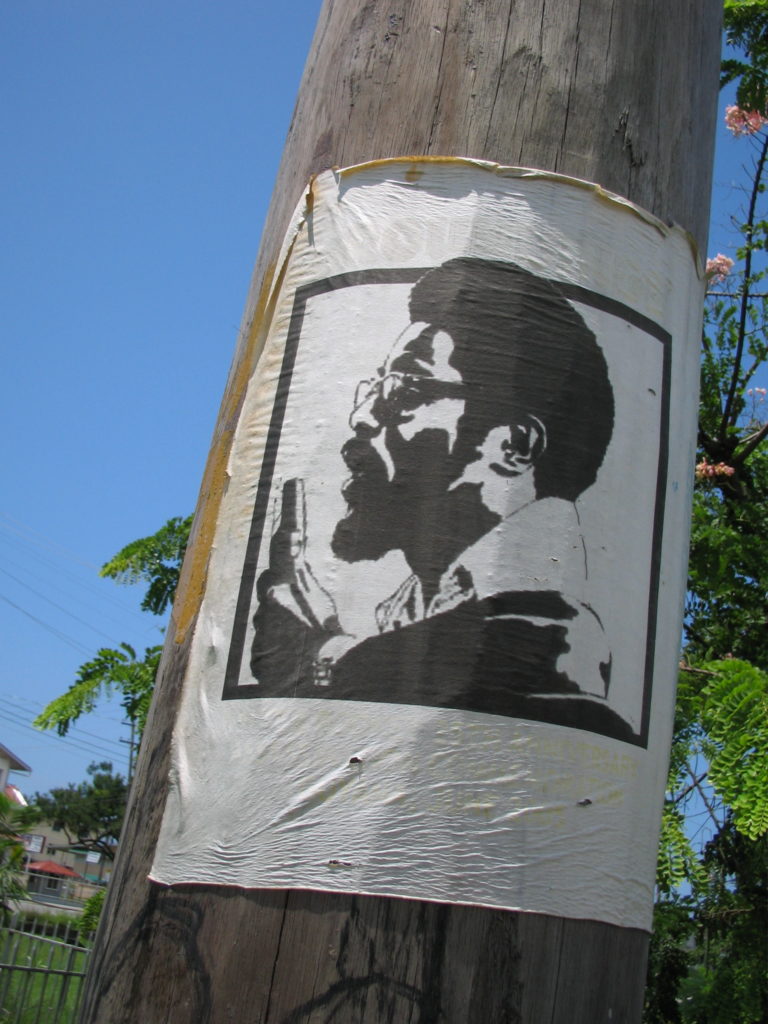 Walter Rodney’s posthumous book The Russian Revolution: A View from the Third World  sought to understand the significance of the Revolution in order to the strengthen liberation movements that Rodney was directly involved in. As Martin Empson explains in this review, these movements took place in the context of historical colonial exploitation or in underdeveloped economies, economies that Rodney argues had been depleted of their wealth, resources and population by Western capitalism. What emerges is a fascinating study of 1917 from a different perspective from the one that emerges from the debates and histories written in Europe and North America.

Walter Rodney was a leading revolutionary intellectual of anti-colonial and revolutionary movements in Africa and the Caribbean. Born in 1942, by the 1960s he was a leading radical voice in the emerging Black Power movements. His academic work in Jamaica’s University of the West Indies was marked by attempts to relate to wider audiences than students and when the authorities banned him from ever returning to the country, riots exploded as thousands demonstrated in his support. Following this Rodney returned to Tanzania where he taught at the University of Dar es Salaam. This book is the first publication of Rodney’s writings about the Russian Revolution based on a series of university lectures he gave in Tanzania which attempted to understand the 1917 events through the experience of post-colonial Africa.

The first thing that should be said is that the editors and publishers have done a brilliant job in producing this book. It’s clear from the introduction that this is the result of years of work in archives and the editors, together with Rodney’s family, should be applauded to making this work available. Because the work remained unfinished in the form that Rodney would have liked due to his assassination in 1980 there are of course omissions. But it is clear that the author wanted this book to be available to a wide audience. Thankfully that is now possible.

The book begins with an over-view of the Russian Revolution and most importantly the economic and political context for 1917. Rodney also provides a detailed commentary on the historiography of the Russian Revolution, highlighting for instance, where authors who are critical of events are often linked to political forces (such as the Hoover Institution for War and Peace) hostile to the Soviet Union and radical movements in general. Rodney quotes one hostile account by Harold Fisher, which said that the Soviet ‘Communist movement…threatens our liberties and those of other free people.’ Rodney continues:

The reader would need to ask whether he or she is included in Fisher’s collective “our,” and whether he or she wants to be included, bearing in mind that the “free people” to whom he refers include the oppressed masses of Spain, Portugal, Greece and Latin America, plus (in 1955) all the colonised and exploited people of Africa and Asia and all the oppressed black people within in the United States!

Rodney here notes that the ‘views of the Russian Revolution’ are often shaped by prevailing political discourse and ignore some of the very factors that made the Revolution possible. But he is also writing about the Revolution in order to strengthen the anti-colonial movements of what today we would call the Global South. These movements took place in the context of historical colonial exploitation or in underdeveloped economies, economies that Rodney argues had been depleted of their wealth, resources and population by Western capitalism. So Rodney is keen to highlight the parallels between Russian in 1917 – with a huge peasantry and relatively small, but powerful working class – and countries like Tanzania where he was working. So this book, far more than most on the Russian Revolution, studies the peasantry. But Rodney does not ignore the central role of the working class. In fact, he follows Trotsky and celebrates the leadership of those workers:

Yet he [Trotsky] attacks the theory of a spontaneous and impersonal revolution as a liberal fiction… Both sides had been preparing for it for years. The fact that one cannot discover the identity of the leaders makes the revolution nameless, but not impersonal. The outbreak must be seen in the context of the generally propagandised condition of the workers, hence the conscious and tempered workers educated for the most part by the party of Lenin [Trotsky’s words].

Reading this I got a real sense of Rodney trying to understand the Russian Revolution for the purpose of emulating its movements. The chapter, “On the ‘Inevitability’ of the Russian Revolution” is clearly about teaching a Marxist understanding of social movements – arising out of historical contradictions, but being rooted in a concrete situation. Thus for Rodney the revolution of February 1917 was ‘made possible’ because of the ‘long-term forces that had been operating within feudalism’ but it wasn’t inevitable.

All this said there are some aspects to the book I disagreed with. Firstly I noted a few errors – Rodney writes that Trotsky returned to Russia at the outbreak of war, but he actually arrived back in 1917 just before Lenin. Rodney (or perhaps the editors) gets confused about the date of writing and publication of Trotsky’s seminal History of the Russian Revolution. In writing that it was written during discussions at Brest-Litovsk the author/editors are confusing this with the earlier and shorter History of the Russian Revolution to Brest-Litovsk, which Trotsky wrote as a polemic for German soldiers and was published much earlier. This is important as the later multi-volume book was part of Trotsky’s arguments about the legacy of the Revolution and first published in English in 1932. These errors should be corrected for any second edition.

More importantly in Rodney’s defence of the Revolution he fails to accept that there was a break between events of 1917, the early 1920s and the Soviet Union in the late 1920s onward. He sees continuity when it is essential to see the break. Rodney defends Stalin (though not completely) arguing that his errors were not the result of personal behaviour but that of the whole organisation and dismisses Trotsky’s criticisms of Stalin as being more about ‘personal character assassination.’ At times this leads to real problems of analysis. Rodney writes, for instance, that ‘By 1936, Stalin was the only one left in Russia from that original group [Bolshevik Old Guard].’ He omits to mention that this was because Stalin had executed or imprisoned most of the Old Bolsheviks! For Rodney ‘Socialism in One Country’ was not the invention of Stalin, but the reality of Russia’s isolation. But this is to misunderstand what Stalin was doing – his industrialisation programmes were a conscious turn away from the strategy of international revolution that Lenin and the Bolsheviks promoted. This meant that on Stalin’s orders the Communist International, which was intended as being a tool to encourage international revolution, became a tool for Russia foreign policy. Thus Rodney is wrong to write:

The failure of revolutions to take place in Western Europe was a function of imperialism, which strengthened their bourgeoisie and disarmed the workers. Stalin and the Russian Communist party and the Comintern had no control over that.

In fact the opposite is true. In Rodney’s eagerness to defend the Revolution from its critics, he ends up ignoring many of the problems of the Soviet Union under Stalin and his heirs. This is not to say that Rodney thought Stalin was a saint – far, far from it. But he does not acknowledge that the Soviet Union of the 1930s was not the revolutionary nation of the early 1920s. He does come close though:

Caught up in contradictions with capitalist powers, the Soviet Union has to strengthen its state apparatus. And in doing so, it is behaving so much like a capitalist state that it is demanding from China land areas once held by the former Tsarist state and it is invading other countries, as in Czechoslovakia.

I think there are two reasons for these errors. First is that Rodney follows Lenin in arguing that there is a labour aristocracy in the West, bought off by the benefits of Imperialism. Ironically however he then ignores that these workers were the ones that triggered the revolutionary movements in Germany and were the core of the Revolution in Russia. Secondly, I think Rodney is reacting against the role of US Imperialism in the Global South. It is not surprising in any way that a revolutionary would hate the legacy of colonialism and the new Imperialism that was being deployed in Africa, Asia and Latin America by the United States. But Rodney fails then to see that the role of the Soviet Union has become Imperialist too.

While noting these disagreements, I also have to agree with Walter Rodney’s family members who write in their acknowledgements that ‘This book provides an “African Perspective” for understanding the Russian Revolution… Readers are reminded that this work needs to be examined in the context of the world as it existed at that time and in the context of who Rodney was at that time, a twenty-eight year old enigmatic historian and scholar-activist, engaging, learning and earning his stripes.’ Had he not been assassinated there is no doubt that Rodney would have continued to be part of the growing movements in Africa and elsewhere against Imperialism and Colonialism. This book, in its final form, would have been developed and built upon, and while it has its problems it is also a fascinating study of 1917 from a different perspective to that which we normally get in Europe. I do hope it gets a wide readership and sparks further debates on what we can do in the 21st century to liberate humanity from the insanity of capitalism.

Martin Empson is a longstanding socialist based in Manchester, UK. He is the author of Land and Labour: Marxism, Ecology and Human History and Kill all the Gentlemen: Class Struggle in the English Countryside. He blogs about books he has read here.