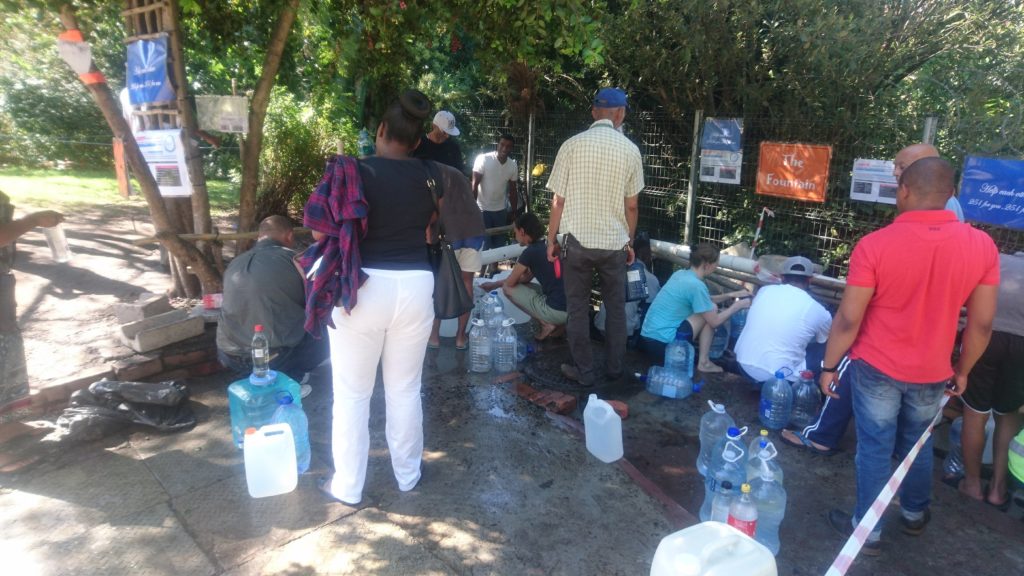 Exposing the illusion of the green economy, Simone Claar argues that while the idea of greening capitalism might provide a clear conscience to regions in the North for addressing the ecological crisis, it perpetuates the exploitative relationship between the North and South. Through the green economy framework capitalism, development, and imperialism are ‘green-washed’ as capital invests in new environmental fields like renewable energy or clean cooking. Such a strategy will only ‘greenwash’ capitalism in Africa, leaving its exploitative and destructive nature unchanged.

Our planet is changing. Droughts, melting ice, heat waves, and floods are affecting the lives of millions of people across the world. African economies are among the most vulnerable in the developing world to the direct and indirect effects of climate change due in significant part to their geographical location and limited economic ability to address the impacts of extreme weather. In 2015/2016, a drought caused by El Niño hit Southern African states and enormously affected the economic life of countries in the region (see Gary Littlejohn’s blogpost). For example, the drought dramatically intensified energy access in Zambia as the levels of water in the Kariba Dam, which is the largest source of energy in Zambia and Zimbabwe, was too low to generate enough electricity. Low energy production resulted in electricity cut-offs for several hours a day. These circumstances hit not only private households but several industries and hence, the whole Zambian economy.

Moving further South, Cape Town provides another powerful example of the dramatic impact climate change is having in Southern Africa. In 2017/2018 the city was almost running out of water, to the point that the government started planning for day zero – the day when water reserves would be empty, and all non-essential water usage would be cut off (see Heike Becker’s blogpost). In preparation, the government started rationing the amount of water to 50 litres per person per day. At the same time, new business opportunities for saving water popped up, such as in well drilling and innovative water saving washing machines. Besides individual household answers, the municipal government supported desalination plants, and three have been running since August 2018.

Despite public and private efforts to sustain water access, in reality, the access depends on class, race and the place people live. Most poor black people have limited access to water while the middle class and the rich have used water for golf courses and swimming pools. They can also afford to buy technology for conserving and reusing water. The drought has affected the poor first and foremost and in doing so underlined the social inequality in Cape Town as well as in South Africa. Limited access to water has also impacted the agricultural sector across the Western Cape. The tourism sector in Cape Town declined although hotels and restaurants were hardly affected by the water crisis.

Currently, water levels in Southern African are rising again, however the next El Niño drought may not be far off. So, we can see that human-made climate change consists of short and long-term catastrophes that impact all spheres of public and private life.

Is the green economy the answer to the ecological crisis?

The global answer by international organizations (such as the United Nation, World Bank, OECD, or the African Development Bank) to climate change is ‘ecological modernization’, that is the call for a more sustainable capitalist economy that also considers the environment. In short, they support green growth for economic development.

For centuries, nature was regarded as a free resource within the capitalist mode of production. In practice, like labour, nature added to surplus value, but nature was used for production without any reciprocity. Moreover, hardly any replenishment of used resources took place. Against this context, adding an economic value and ‘capitalising’ – as suggested in the debate on the green economy – may seem at first glance as an important solution to the global ecological crisis. Consequently, the international focus of the UN and others has turned towards promoting sustainable development and the green growth paradigm in order to limit the effects of climate change.

The financial and economic crisis in 2007-2008 was a window of opportunity to bring green concepts to the table. In 2009, UNEP claimed in the New Green Deal for a transition to a green economy. This was a political concept linking economic growth to a reduction in carbon emissions, taking into account  the vulnerability of the ecosystems as well as using resources and energy in an environmentally friendly way. Concepts, such as the sustainable development goals, support African states to plan and implement green development with technical assistance, capacity building, and finance.

Today pushing the green economy as a new economic chance for development in the South, in particular in the African context, is also a strategy for stabilizing and enhancing foreign markets by providing new economic opportunities. Addressing climate change is of secondary importance. The general mechanism of global capitalist development continues, and the green economy does not change the pattern of uneven development. The intellectual debates on shaping the greening of the economy are mainly taking place in the Northern hemisphere, while in the South those who are the most vulnerable to and affected by climate change are ignored.

At the same time, the North’s imperialist and exploitative behaviour continues to take place on the back of the South. The green economy might provide a clear conscience to regions in the North for addressing the ecological crisis, it perpetuates the exploitative relationship between the North and South. However, the Global South does not only react to international politics but also participates and shapes these processes within the existing economic structure. This means that African states are providing the legislation and policies for investments as well as for financial support by global institutions.

Overall, via the green economy framework capitalism, development, and imperialism are ‘green-washed’ as capital invests in new environmental fields like renewable energy or clean cooking. However, similar to fossil-fuel based capitalism the green paradigm changes little regarding the tendency of capitalism in Africa to perpetuate inequality. The green economy strategy is part of the process to transform capitalist societies into green capitalism. According to Ulrich Brand, green capitalism is ‘a new phase of the regulation of societal nature relations, which would not fundamentally stop the degradation.’ This transformation will not change the principal character of capitalism, globally. It will probably only ‘green-wash’ capitalism in Africa and transform it into a Green African Capitalism of the future.

African economies are differently interwoven into global capitalist development and are still dependent on their former colonial powers. During the period of globalization and neoliberalism, African economies were even more challenged to maintain access to the global market for selling their natural resources and agricultural goods. In order to understand the connection between the green economy and Africa, we have to think about the specific characteristics of African capitalism.

In general, the entry point of green capitalist class relations is interwoven with the foreign capitalist class relations in African states, mainly related to the previous colonizers. At the same time, the location of the national capitalist class remains mainly within the national borders and focused on national economic development. The capitalist class that is linked to foreign capital, have strong ties to transnational capital and thus more options to benefit from the green market, in particular, finance and banking capital from South Africa (e.g., Standard Bank or Old Mutual). Thus, foreign capital, mainly large transnational corporations, have easier access to the emerging green market while domestic capital and local companies have limited access to knowledge, finance, and technology, as the winners of renewable energy tenders in South Africa and Zambia demonstrate.

Within the green economy there are also new possibilities for employment, but not for the workers within the fossil-fuel industry. The global labour movement calls for a ‘just transition’. This means that achieving a sustainable economy also involves massive social and economic changes and a transition for the workforce. Accordingly, the green economy should also provide new possibilities for employment in the new green sector and existing jobs transformed into green jobs. However, in the context of African societies, workers in the fossil-fuel sector are rightly scared of losing their jobs despite campaigns like one million climate jobs in South Africa that feed into the global discourse. Fossil-fuel jobs will disappear not only because of renewable energy but because of technological changes and closing down of old power stations.

Climate and renewable energy jobs need a mixture of low-skilled, semi-skilled and high-skilled workers. However, the overall number in comparison to mining jobs is likely to be smaller. Moreover, the new jobs might be in different geographical spaces, and not all workers can follow the new work, if these jobs even appear. In particular, high unemployment plagues African societies and most workers remain deeply skeptical about the green economy providing employment alternatives.

Currently, the ‘green-washing’ has had limited impact on the position of African states and societies in the global capitalist system. The ‘dependencies’ of African countries remain in the existing capitalist order, and the overall position of African economies in the global value chain also remains largely unchanged. Green capital, green investment, and green development may actually lead to an even deeper commodification of the environment, for instance, the creation of new dependencies on technology and knowledge from the North.

Within African states, changes may take place as new capital formations, and green elites emerge, but at the same time, the transnational relationship and global inequalities are not challenged. We know from previous developments like the displacement of people for building new dams that local businesses, communities, and trade unions are often left out of the decision-making process. Even if they are involved, they have limited power to change policy directions as foreign capital provides the funds as well as the technical equipment. We can expect the same process to take place in the area of the green economy. For instance, in the current debate on the Renewable Energy Independent Power Producer Procurement in South Africa labour fears losing jobs in the fossil fuel sector, and demands more consultation or in the solar tender in Zambia most short-listed companies are foreign.

In summary, the green economy does not change the nature of capitalism but supports the transformation towards a Green African Capitalism. The current processes at work on the continent indicate that there is limited room for African subaltern agency in shaping the green strategy. The rise in the green economy also brings along new ‘green’ elites that might undertake the transformation process themselves, while the popular classes hardly participate in these processes. Instead we see a deepening dependency on the relationship to the former colonizers despite the emergence of new players like China or the Arab states. Yet, for capitalism, the green strategy provides new accumulation spheres under the umbrella of greening the economy. So, the exploitation of nature will continue if there is no immediate real change in the nature of capitalism and politics in our current system.

Simone Claar is a senior researcher at the University of Kassel, and she teaches and conducts research on capitalism, class, trade, and labour. She is part of the ‘Glocalpower’ research group that works on funds, tools, and networks in African energy transition.