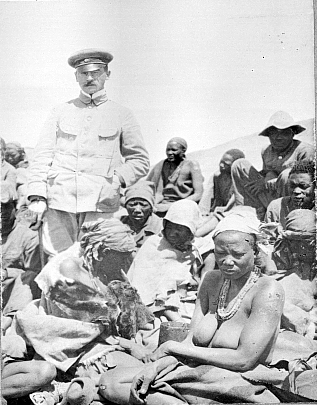 As late as October 2003 then German Foreign Minister Joseph ‘Joschka’ Fischer stated during a visit to the Namibian capital Windhoek that there would be no apology for the first genocide of the 20th century, which was committed by German colonial troops in Namibia in 1904-1908. Only in 2015, official Germany finally acknowledged that the demise of eighty per cent of the Herero and fifty per cent of the Nama of central and southern Namibia indeed constituted a genocide when the speaker of the German parliament, Norbert Lammert, penned an article in the influential weekly Die Zeit. Lammert acknowledged that the war crimes committed by the colonial command in Namibia were not merely an unfortunate series of events but that the German command had intentionally aimed at annihilating the local population groups that had risen up against colonial conquest and dispossession. Shortly afterwards the Foreign Ministry acknowledged the genocide during a press conference of 10 July 2015: “The war of extermination in Namibia from 1904 to 1908 was a war crime and a genocide”.

This acknowledgment set a process into motion. Now official Namibian and German envoys are talking about the way ahead; the programme involves three steps: acknowledgment, apology, reparations. These negotiations are complicated and contested. Thus far, the envisaged formal apology is still due. On the German side, voices have already ruled out reparations. In Namibia, members of the affected communities have claimed that they be part of a more inclusive process. In October 2016, an international civil society congress, “Restorative Justice after Genocide”, brought together over 50 Herero and Nama delegates from around the world with German solidarity activists in Berlin to discuss the way forward. Prior to the congress, a press conference with the Herero and Nama delegates, organised by Niema Movassat, (Die LINKE) Mitglied des Deutschen Bundestages (Member of Parliament) was held on October 14, 2016 in the German Bundestag (see the clip below).

The Die LINKE group invited to the Bundestag on 14 October 2016, representatives of the Herero und Nama. Niema Movassat, for Die LINKE, Chairman in the Committee on Economic Cooperation and Development, introduced the topic and presented the left critique of the current position of the German Federal Government (please note that this press conference is in English and German).

On 5 January 2017, Ovaherero Chief Advocate Vekuii Rukoro and Head of the Nama traditional authorities David Fredericks filed a class act legal claim in New York, invoking the Alien Tort Statute, a 1789 United States law often used in human rights cases. They are suing Germany for damages directly to be paid to the descendants of the genocide of the Ovaherero and Nama. Significantly, the plaintiffs are also seeking an order from the US court requesting that they, as the lawful representatives of the peoples directly affected, be included in any negotiations and settlements between Germany and Namibia.

The Ovaherero and Nama chiefs invoke the United Nations Declaration on the Rights of Indigenous Peoples of 2007. This legal reference and comments by the Rukoro, Fredericks and their lawyer, Ken McCallion, indicate that the law suit is directed at transnational restorative justice, but also at Namibian nationalist politics. The chiefs stated that the Namibian government could not adequately and completely represent the interests of the Ovaherero and Nama as “indigenous and minority” communities in Namibia, and even less so those of Ovaherero and Nama peoples living in Botswana, Souith Africa, the US, and elsewhere. Their legal representative further expressed suspicion that reparations, if paid in the form of foreign aid by Germany to official Namibia, might not reach the “indigenous communities directly affected.”

Heike Becker has written extensively about memory politics and nationalism in Namibia. Professor of Anthropology at the University of the Western Cape, Heike directs research and teaching on multiculturalism and diversity. Heike is a regular contributor to roape.net and has her own website and blog.