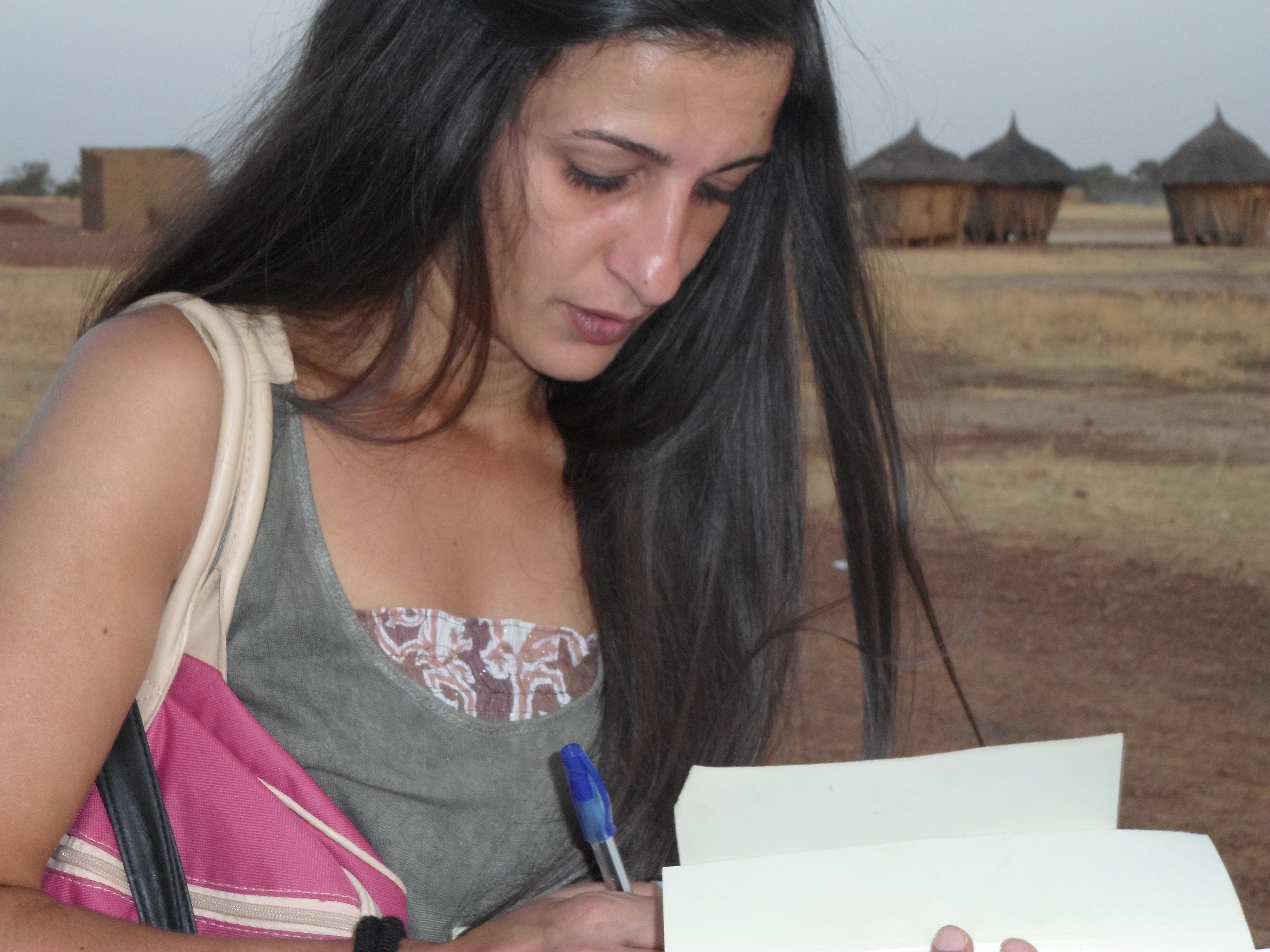 By Pascal Bianchini and Leo Zeilig

On 25 March, the activist, researcher and writer Lila Chouli died less than a year after receiving the news that she had an incurable illness. As a profoundly private person, Lila would have probably preferred for us not to write an obituary-yet the significance of her life, her work and her contribution to Africa’s struggle for liberation and justice compels us to write.

Lila was born in 1977 in the North of France from an immigrant family from Algeria. After studying communications and journalism in her home region, she moved to Paris for work. A few years later, after reading the book La Françafrique, which exposed, like no study before, France’s exploitative relationship with its ex-colonies in Africa, she decided to meet the author François Xavier Verschave. Soon afterwards she started to collaborate with Survie-an organisation that denonces all forms of French neocolonial intervention in Africa and campaigns for a transformation of French foreign policy in Africa.

In 2004, she travelled for the first time to Burkina Faso, to meet activists from the Association nationale des étudiants du Burkina (National Association of Burkinabè Students) and the Mouvement burkinabè des droits de l’homme et des peuples (Burkinabè Movement for Human Rights). In 2007, she started to work as a copy-editor for the Council for the Development of Social Science Research in Africa (CODESRIA) in Dakar. Two years later she wrote her first research articles (published Savoir-Agir and the Journal of Higher Education in Africa), and became a Research Fellow at the University of Johannesburg in South Africa.

In 2010, she moved to London where she worked at the well-known left-wing bookshop Bookmarks. As events in Burkina Faso unfolded in 2011 after the death of the schoolboy, Justin Zongo, on 20 February, following several violent arrests by the police, Lila maintained her exacting focus on the tumultuous movements that rippled across the landlocked West African country. In 2012, her book on Burkina Faso’s extraordinary year was published, Burkina Faso 2011: Chronicle d’un mouvement social (Burkina Faso 2011: Account of a Social Movement) – in English, the same year, a group of activists translated a section of her book for the pamphlet, Popular Protests, Military Mutinies and Workers Struggles. The book, that spoke of the waves of protests, of students, miners in the country’s gold mines, agricultural workers, and army mutinies, made a significant impact in Burkina Faso, where Lila’s respect among activists, trade unionists and student leaders was considerable.

After the publication of her 2012 book, Lila was called to speak at various events. Invited to Dakar for a conference about social movements in Africa, she developed new contacts with African academics and activists and also left-leaning institutes, such as the Rosa Luxemburg Foundation. In December 2013, she returned to Burkina Faso to make a documentary about the gold mining boom and the exploitation of mine-workers – the film was released in 2015.

From research for the film she wrote a new book that was published in 2014 by the radical Fondation Gabriel Peri, where she was then employed. Le boom minier au Burkina Faso, (The Mining Boom in Burkina Faso) analysed the country’s mining boom, mainly of gold. The boom was sold to the population as a contribution to its development – Burkina Faso has long ranked among the poorest countries in the world, 181 of 187 countries according to the United Nations Human Development Index in 2013. Lila’s book showed that the vast majority of the population have seen no benefits from the boom. Worse, she wrote, how the populations surrounding the industrial mining sites had in fact become poorer than before the arrival of transnational corporations. Lila’s book provided both invaluable context to the boom and individual testimony of those most affected, and struggling against, the mining giants.

When the popular uprising in Burkina Faso took place in October 2014, she wrote several articles and was invited by television and radio stations to speak on the events. She was working on a new book about the uprising of 2014 and the period of transition when she received the diagnosis-in early spring 2015 she was told her disease could not be cured. Despite this, another book on the student movement in Burkina Faso from the 1990 to 2011, was prepared for publication. Progress of this study was delayed because Lila, in September 2015, was preoccupied by her activism at Gabriel Peri. We hope this book, will be published in the coming months.

In a few years, Lila was incredibly prolific, respected as both an analyst and activist – the two were entirely, necessarily, interchangeable for her. From 2012 she became known as one of the main ‘specialists’ on Burkina Faso, even if she rejected this term. Lila was both extremely rigourous in her intellectual work and completely committed to contribute to the emancipation of the ‘wretched of the earth’. Her writing and research can only be understood from this commitment, research for research sake was meaningless for her.

Embracing her proletarian, immigrant background, she always sided with the underdog and refused to accept positions which were alien to her rebel spirit; for instance, in her twenties Lila was selected to become a communication officer at the African Union in Addis Ababa-work that would have guaranteed a comfortable and exciting life at the centre of formal African politics. She refused the offer. In the last years of her life she was invited into the academic world, yet she remained reluctant to abide by the unwritten rules of the system, requiring respect of academic ‘experts’ whom she never feared to openly contradict. She never sought career opportunities, instead she wrote studies of astonishing ‘academic’ value living for most of her time on occasional jobs or on the dole. Though Lila established lasting connections with activists and organisations, in Europe and Africa, she never became a formal member of any organisation.

Paying attention to everyone she met, scrutinizing events and declarations, Lila had a tireless commitment to thorough research. Yet she was hard on herself, working for weeks in libraries, permanently fearing that she would be caught out or had an insufficient theoretical framework. Her research interest were also broad.

However, she was not only able to write accurate accounts based on original empirical material, Lila demonstrated an ability to analyse political strategies and critical political developments with a high degree of theoretical sophistication. For instance, she showed how the repression of the student movement from the 1990’s to the 2000’s evolved from blatant use of violence towards a more legal system of control (what she called the ‘domestication’ of the student movements). On the other hand, to explain the long-lasting effects of mobilisations, she explained the fluctuation of active phases of mobilisation and of decline through the phenomenon of ‘abeyance’-employing the concept of the American scholar Verta Taylor. She also located the exploitation of gold and of the workforce in the mines of Burkina Faso in the context of the capitalist ‘accumulation by dispossession’, a concept coined and theorized by David Harvey.

In her last work, she argued that the fall of the Blaise Compaoré and his regime in Burkina Faso, with the 2014 revolution, was principally the result of long-term popular struggles that had been possible through the engagement of counter-hegemonic forces — mainly the trade union federation, CGT-B or the Mouvement burkinabè des droits de l’homme et des peuples or even more recently the Organisation Démocratique de la Jeunesse (Democratic Youth Organisation). She made these observations on the basis of extensive research and frequently in opposition to the views that stated that the revolution in October 2014, and the revolts that had preceded it, was motivated almost entirely by the legacy of Thomas Sankara, the radical army captain and head of state, murdered in 1987, and the late-born Le Balai Citoyen (The Citizen broom). Lila shunned all intellectual fashions, and political orthodoxy-old and new. In line with Frantz Fanon’s views, she considered that official political leadership or more recently the media, that monopolises the commentary on Africa and elsewhere in the Third World, is largely irrelevant, compared to the level of political consciousness of the poor and marginalized active in revolutionary change.

The absurdity of Lila’s early death, she was 39, makes it hard for any of us who knew her to clear the grief and see clearly. One of the writers and activists that influenced and inspired her, Frantz Fanon, wrote to his close friend when he learnt that he would not survive his sickness in 1961, ‘We are nothing on earth if we are not ﬁrst of all slaves to a cause, the cause of the people, the cause of justice and freedom. I want you to know that even at the moment when the doctors had despaired I thought again [ …] of the people of the Third World, and if I held on, it is because of them.’ Lila’s death has robbed the world of a rare and committed intellectual and activist. It will take time to grieve, though it is our hope that her example will inspire those who must add their own efforts to the self-emancipation in Africa and elsewhere.

Pascal Bianchini is an independent researcher and scholar based in Dakar and Leo Zeilig is a ROAPE editor and coordinator of roape.net