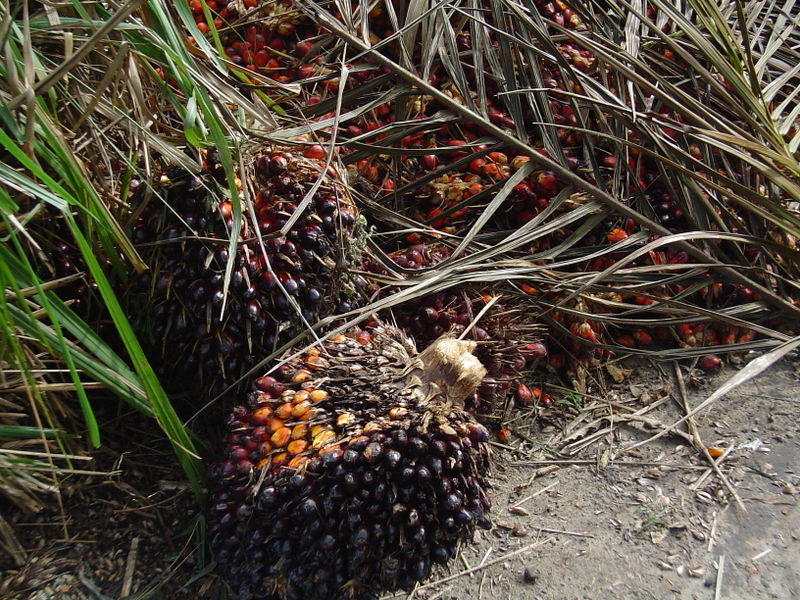 According to Emily Braun, curator of the Burri retrospective at the Guggenheim Museum in New York (October 9, 2015–January 6, 2016), this painting (a collage of burlap sacks – see below) was created in 1961 to commemorate thirteen Italian airmen murdered in the chaos of Congolese power struggles that followed independence from Belgium.  This account can be traced to a review of an exhibit of Alberto Burri’s work at the Houston Museum of Fine Arts in 1963.  The massacre occurred in mid-November 1961 in Kindu, a town in South Kivu, an eastern province of DR Congo that sits just above copper-rich Katanga. ONUC, the United Nations Operation in Congo, sent the Italians there to deliver supplies to a unit of Malaysian troops. Congolese soldiers loyal to Antoine Gizenga, who supported Patrice Lumumba (assassinated on January 17, 1961 in Lubumbashi), apparently mistook the Italians for parachutists fighting with Moïse Tshombe, leader of the Katanga secession. 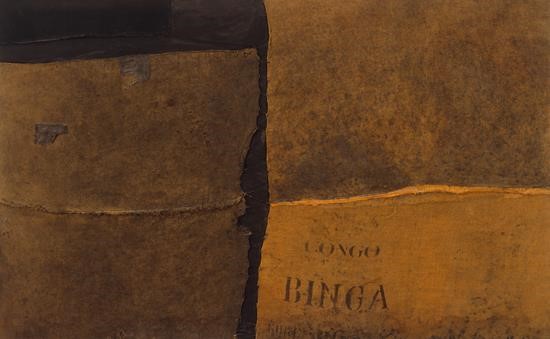 The pieces of burlap are arranged in quadrants to create a central cross. The patch on the lower right is stamped Congo Binga, the name of a plantation town on a tributary of the Congo River in Equateur Province, some 850km northwest of Kindu where the murders occurred. How ironic that a sack from a Congo plantation, the sort of workplace where millions of Africans had died at the hands of Belgian colonists, should be used to memorialize thirteen Italian pilots!

Binga plantation belonged to the Lever palm oil monopoly. Jules Marchal, writing about colonial exploitation in Congo, notes that the war years, 1940-45, were the apogee of forced labour on such plantations. The Belgian Congo concluded an agreement with London to supply palm oil, which was at the top of their list of necessary raw materials to produce cooking oil, soap, margarine and cosmetics. To get the palm nuts, Africans had to scale trees 15-20 metres in height; they were expected to cut fruit and supply 150 crates monthly, each weighing 35 kilos. They were paid derisory sums for this arduous and dangerous work; even the Belgians admitted that the men were underpaid. Cutters were also compelled to cultivate certain crops (cotton, foodstuffs, palm trees); failure to meet the quotas was punished with prison sentences, and in prison the chicotte (rawhide whip) was still in use in 1959.

Alberto Burri (1915-1995) dropped out of school in 1935 to enlist in Benito Mussolini’s campaign to expand the Italian empire in Africa (Asab, 1869; Massawa, 1885; Somalia, 1888; Eritrea, 1890; Libya, 1894; Ethiopia, 1936). Burri fought in Ethiopia, a campaign that illegally used mustard gas and phosgene and claimed the lives of three-quarters of a million Ethiopians by the end of the world war – an estimated 7 per cent of the population. After completing his medical degree in 1940, Burri went on to fight in the 102nd Black Shirt Battalion’s invasion of Albania (annexed by Italy in 1939) and the Axis campaign in North Africa. He was captured in Tunisia by the British in May 1943; Mussolini was deposed 25 July 1943 and died 28 April 1945. Turned over to the Americans, Burri was shipped to a POW camp in Hereford, Texas. There he took advantage of arts and crafts classes and learned to paint.  The Americans urged the imprisoned Italians to sign a pledge of allegiance to the Allies, but Burri was one of some 900 officers who refused to change sides.

There is no account of how a burlap sack from Binga came into Burri’s hands; he usually obtained his materials from a mill in his hometown Città di Castello, a city located in the north Umbrian province of Perugia.  In 1960, the plantation would have been producing palm oil, coffee, cocoa and rubber—perhaps a sack of Binga coffee beans made its way to Rome. Mobutu Sese Soko acquired the site following his ‘Zairianization’ of foreign enterprises in 1974, one of fourteen that made up CELZA (Cultures et élévages du Zaïre). The plantation was still productive in January 1999, during the Second Congo War, when Jean-Pierre Bemba (Mouvement pour la libération du Congo) and General James Kazini (a Ugandan army officer who served as commander of the Uganda People’s Defense Force 2001-2003) organized a large operation to confiscate tons of coffee beans, an example of the stripping of Congo assets by Uganda and Rwanda. Binga was all but defunct by the time its current owner acquired it in 2004; he is an American named Elwyn Blattner who heads the Groupe Blattner Elwyn, a vast enterprise of palm oil, rubber and forestry businesses based in Kinshasa.

Alberto Burri went on to become a major figure in postwar art. In 1955 he married the American dancer Minsa Craig (sister-in-law to Studs Terkel, the popular American oral historian) and lived in both the US and Italy. In the late 1950s Burri shifted from sacks to materials fabricated for shelter, critical to economic infrastructure: cheaply manufactured wood veneer, industrial plastics, sheet metal and Celotex insulation board.  Through this use of architectural materials Burri’s art is close to architecture. Architecture had played a seminal role in the advancement of Fascist ideologies, and many art critics have speculated on the meaning of Burri’s use of an oxy-acetylene torch to destroy these materials.

Congo Binga is neither the most imaginative nor the most lyrical of Burri’s sacchi. It does, however, speak eloquently of Italian, African and colonial history.