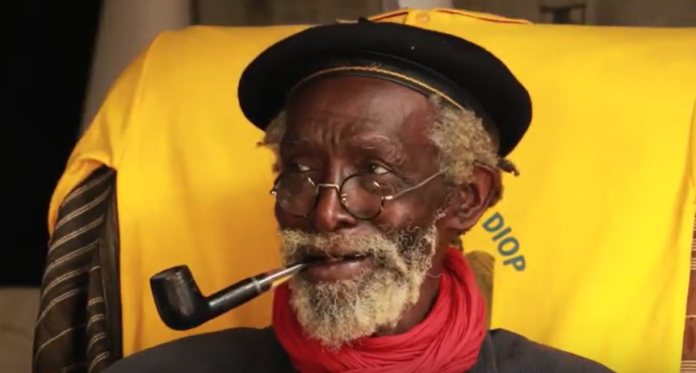 May 1968 in Dakar was a defining moment in the political history of Senegal. Dakar University students went on strike and blockaded the campus. The protests were violently suppressed, sparking a short-lived but intense nationwide revolutionary uprising against the ruling class. Over the last several years, videographer Yannek Simalla has compiled a collection of filmed testimonies from activists involved in the protests. Here, he introduces his collection, the creative process behind it, and how memories of May 1968 inform us as much about the present of Senegalese society as they do the past.

In 2017, with two friends, we started a biographical film project about Issa Samb, a Senegalese artist and agitator known by the alias Joe Ouakam. Reading an article by François Blum took Issa to the events of May 1968 in Dakar, Senegal, when several hundred students from the University of Dakar were rounded up and then transferred to Camp Archinard.

Issa wrote a poem asking for their release, and he recites it for us. I discover with him a student movement with its own demands that was close to youth movements in France and other industrialized countries, and was notable for its aspirations to freedom (Amadou Doucouré translates this double characteristic, explaining how he was revolted in the face of a colonial situation made up of regular humiliations within the university and at the same time fascinated by Jimmy Hendrix – he went on to take musical classes at Berkley College in the US).

The collection of testimonies has been an ongoing project since 2017. The decision to make portraits allows the events of May ‘68 to become embodied by individual trajectories, from students of prestigious families ‘aspiring to lead the country’ (Mamadou Racine Bathily), to people of more modest origins such as the trade unionist Birahim Ba and the apprentice shoemaker Pa Diagne.

The choice to give the floor to the this cast of characters, those who have not subsequently known the bright lights of political success, makes it possible to observe raw material that has not been the subject of multiple reconstructions during its formulation.

However, it is not a question of saying here that we would reach something more real because it had been less worked by memory, a kind of nugget of truth unearthed late. The individual stories that have been little produced and little repeated are not fossilized. They are still the subject of modifications during discussion and during the meetings before filming begins.

Birahim Ba’s account of the attack on the university by the security forces (the level of violence involved in particular) has changed over time, as meetings and interlocutors progressed, as if all this memory still hadn’t stabilized 50 years later. Similarly, an informal discussion, often off-camera, can bring up explanatory elements not previously mustered. This was the case with Mamadou Diop-Decroix, who related stories about Luis Cabral (the brother of Amilcar Cabral) and the war of liberation waged in Guinea against the Portuguese colonizer.

By summoning the memories of May ‘68 in Dakar, I have the acute impression of observing people who share between them the nostalgia of an era. It’s a bit like watching the French moved to see the spire of Notre Dame fall in flames. Their emotion reflects to a certain extent their feeling about the supposed state of present-day France (in distress) compared to the time when cathedrals were being built.

Similarly, listening to the testimonies of Senegalese activists informs us more about the present of Senegalese society in terms of the hope and energy that these ‘years of embers’ (Mao Wane) contained. The nostalgia for this era is often expressed directly (Birahim Ba) or more implicitly when speakers enthusiastically agree to devote a considerable amount of time to an interview (Mamadou Diop-Decroix).

In order to better contextualize these testimonies, it was necessary to understand the sequence of events, the history of the regime presided over by Léopold Sédar Senghor, its difficulties in moving towards democracy, the succession of political repressions and their intimate relations with the former colonial power. But it was also necessary to show a theorization of the events which brings out lines of interpretation without which we fail to understand what was at stake at the time. For this, archival research and the work of Pascal Bianchini, Françoise Blum, Omar Gueye and Abdoulaye Bathily were of huge help and guidance.

May ’68, having given birth to young children and youth and student movements (but not only), bloomed thereafter. The one-party regime could not provoke anything other than protest and clandestine organization. The spontaneous tendency (the Marxist-Leninist Youth Movement embodied by Mao Wane) or the more organizational tendency of those who would later form the And-Jeff party (‘Acting Together’ in Wolof) forced the Senegalese political regime to open up and, little by little, become more democratic.

Here again, the repression initiated at the time by the regime, the tortures endured, constituted an essential element of their narrative (‘the police torture people’, Ismaëla Diakhaté) that sometimes had to be brought out through questions or that sometimes were immediately imposed as a central moment of their understanding as to what power is (Eugénie Aw). This brutality was constitutive of the regime since the prohibition of the PAI (African Independence Party) in 1960, with the colonial legacy also expressing itself in these practices.

Finally, and it is a question of wondering about the reasons which lead us to do certain things and not others, to make known or recall the importance of these left-wing movements through their small and large actors in the advent of democracy in Senegal is for me a way of giving back to this country the welcome it has given me for more than 20 years.

Yannek Simalla works at the Lycée Jean Mermoz in Dakar, where he has been teaching for more than 20 years. He studied economics at La Sorbonne in France. His grandmother was a worker and trade unionist in the textile factories of the Roanne region of France.