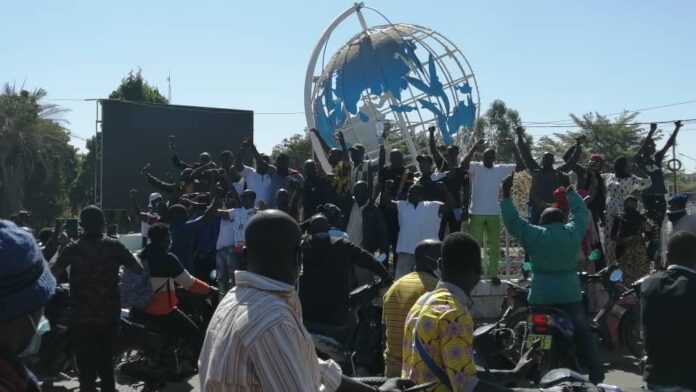 Discussing the recent coup in Burkina Faso, ROAPE’s Bettina Engels describes the major instability in the country and the region. For several years there have been attacks by non-state groups across the country – with two million people displaced, and more than 4000 killed in the last 12 months. The current military junta is an expression of this wider breakdown, and the intervention of imperialist countries.

On Friday, 30 September, gunfire was heard at the Presidential palace in Ouagadougou early in the morning. Soldiers blocked some of the principal roads in Burkina Faso’s capital. The national broadcasting station RTB (Radiodiffusion-Télévision du Burkina) was temporarily cut off. It was a sense of déjà vu – a very similar situation occurred not even nine months before, on 24 January. Then a coup led by one of the country’s highest military ranks, lieutenant colonel Paul-Henri Sandogo Damiba, toppled the previous civilian President Roch Marc Christian Kaboré. In January, many people principally agreed to the coup, or at least they did not oppose it.

Since the second half of the 2010s, and clearly increasingly during the last three years, non-state armed groups, mostly jihadist ones with linkages to al-Qaeda and the Islamic State, have committed attacks in Burkina Faso. Around two million people are internally displaced, almost ten percent of the population. Between late October 2021 and late October 2022, more than 4,000 people have been killed in attacks, counter strikes by the military, etc. Damiba and his Mouvement patriotique pour la sauvegarde et la restauration (MPSR), the military junta, that took over over in January, justified their coup pointing at the government’s failure to effectively fight the armed groups.

Another coup to “fight terrorism”?

Eight months later, at the end of September this year, lower ranks in the army led by captain Ibrahim Traoré staged a coup against Damiba. The number of attacks have increased within the past six months, despite the announcement of the transitional government that had been appointed in March, headed by Damiba as president, to make the “fight against terrorism” the top priority. The recent sequence of armed attacks temporarily peaked in late September with two consecutive attacks near the town of Djibo.

According to official figures, 37 persons, including 27 members of the armed forces, were killed in an attack of a convoy in Gaskindé 180 kilometres North of Ouagadougou on 26 September. The convoy of more than 200 trucks was accompanied by the state security forces and was supposed to deliver foodstuff to Djibo that is currently home of around 300,000 people, most of them internally displaced. Earlier in September, on the same road 35 civilians were killed in a mine explosion. Meanwhile, foodstuff and medicines are now only transported to Djibo by helicopters.

The military coup, four days after the Gaskindé attack, did not come as a surprise. Frustration within the army about the lack of success in the fight against the armed jihadist groups is ever-present. Lower ranks have long been feeling ignored by the military leadership. In late September, Ibrahim Traoré ineffectively demanded a meeting with Damiba, to present the claims of the lower ranks, notably those within the MPSR, to him. In contrast to the January coup, the one on 30 September was a typical “coup from below” carried out by junior officers who do not see any chance to prevail within the army.

Captain Ibrahim Traoré begun his military career as a  “rank-and-file” soldier and successivelyrose to being the chief of the special forces “Cobra” in the region around the town of Kaya in the North of the country. In 2018, he was deployed as a blue helmet in the UN mission MINUSMA (Multidimensional Integrated Stabilization Mission in Mali) in Mali. Traoré supported Damiba’s coup in January and was a member of the MPSR from the beginning. Aged 34, he is said to be currently the world’s youngest head of a state.

Traoré’s appearance on television on 30 September in the evening was remarkably similar to Damiba’s in January. Surrounded by armed and mostly masked soldiers, Traoré read a declaration that the government was dissolved, the constitution suspended and the state borders closed. A curfew was imposed from 9 pm to 6 am.

At first it was unclear where Damiba was staying. There were rumours saying that the French army had helped him by flying him to Dakar, or that he was staying in the French military base of Kamboisin close to Ouagadougou, where he was preparing a counter offensive against the recent coup. The French ministry of foreign affairs denied this immediately and clearly: France would not be involved claimed the official statement. It was obvious that the rumour would reinforce the critique and rejection of France, the former colonial power that still has an enormous influence in the region.

In Ouagadougou and Bobo-Dioulasso, the second largest city in the country, furious demonstrators, on 1 October,attacked the French cultural institutes, and in the capital the French embassy. It might have been strategic, in order to put pressure on Damiba, that Traoré publicly blamed France for protecting Damiba and announced that Burkina was “open to all partners in the fight against terrorism.” Religious and traditional authorities mediated between Traoré and Damiba. On Sunday, 2 October Damiba agreed to step back, on the condition that security for his supporters within the military and himself was guaranteed and the schedule for a transition of no more than two years would be respected. Traoré agreed. The borders were reopened for air traffic 48 hours after they had been closed, and the night curfew was lifted. Actually, it emerged, Damiba had left the country to neighbouring Togo, as the Togolese government confirmed on 3 October.

On 5 October, a spokesperson of the putschists declared Traoré as President and head of the armed forces. On 14 and 15 October a “national assembly” of representatives of the political parties, traditional and religious authorities, trade unions and civil society was held. A charter of the transition was adopted with a schedule for the transition of 21 months, until July 2024. Traoré’s timetable followed the same pattern as Damiba eight months before. In February Damiba had installed a 15-person commission to work out a timetable for the transition and in early March, he signed the charter of the transition and appointed a transitional government.

The recent transitional government was appointed on 25 October, with Appollinaire Joachim Kyelem de Tembela, a lawyer and former director of a think tank for international and strategic studies, as prime minister. The legislative assembly (parliament has been dissolved) is now comprised of 20 persons named by the president, 13 (who must not be members of any political party) representing each one of the country’s regions, 12 representatives of political parties, 16 military personnel and 10 “civil society” persons (two each from agriculture, the private sector, youth, women, and people living with handicaps).

Following the January coup, some people have hoped that a military head of state would be able to strengthen the army in the fight against the armed groups and to improve the security situation in the country. Given that during the course of 2022, the situation has deterioriated, a sense of resignation now predominates. During the demonstrations on the week-end following the coup (1-2 October) Russian flags were present, might be interpreted in various ways: as indicating that some actually hope that Russian military support – which would probably mean deploying the private military company Wagner – would result in success in the fight against the armed groups. Or the flags could be considered an expression of the steadily increasing critical stance towards the influence of France, and particularly the French military presence in the region. Or possibly some of the flags do not come with any clear intention or political claim. In any case the Russian flags attracted more attention in the European media than in Burkina Faso. The framing of “France vs. Russia” rather reflects the proclivities of European media, their political discourses and geopolitical interests rather than a serious analysis of the recent conflicts in West Africa.

Actually Damiba, being one of the highest military officers, already had suggested to the previous president Kaboré to deploy the contested Russian private military company Wagner; a suggestion Kaboré swiftly rejected. So far it remains open whether in Burkina Faso, as in neighbouring Mali, French troops will withdraw. According to media reports, Traoré meanwhile has declared that he has no intentions of hiring Wagner mercenaries. With regard to reports of severe human rights violations and violence committed by Wagner mercenaries in Mali and the Central African Republic, deploying the private military company to Burkina would simply deepen the instability. The very last thing that people of Burkina Faso need is yet another imperialist actor able to arbitrarily perpetrate violence.

It remains an open question who should be Burkina Faso’s “partners” in the fight against terrorism. It would be naive to hope that the armed groups will stop the attacks without being forced by military violence to do so. Therefore, the Burkinabé army needs personnel, equipment and competencies – including the competency to respect and defend substantial human rights and protect the people in the country instead becoming a threat to security itself. The former colonial power France has hardly proven itself as the right “partner”, and the French military operation “Barkhane” in the Sahel region has reinforced the popular rejection towards France. Neither has the transnational joint “anti-terror” operation of the G5 Sahel states (Burkina Faso, Mali, Mauretania, Niger, Chad) thus far succeeded in improving the security situation. Serious accusations have been raised of human rights violations and massacres against civilians by soldiers of these operations. Altogether, military interventions have seriously destabilized than stabilized the region. The option of an ECOWAS intervention or a UN mission has hardly been discussed.

Radical organisations and trade unions have opposed both coups. Yet their room for manoeuvre already has been severely curtailed by the previous elected government of Kaboré. Their situation had not improved after the coup in January, and it seems unlikely that this will be the case in the near future. Most of them follow the process of transition from a critical distance. A new transitional government of 23 ministers (five women and 18 men, three of them being from high military ranks) was installed on 25 October. National elections are supposed to be held in 2024. Many people have serious doubts about the institution of national elections. Related to past presidential and parliament elections, calls for boycotts have been frequently launched. Today, radical political groups will discuss how to position themselves with regard to the elections planned for 2024. The prolonged security crisis and political-military instability are a constant personal strain on activists. Activistsand their organisations have to permanently react to events. These conditions hardly leave room to reflect on developing progressive visions and strategies.

Bettina Engels teaches at the Department of Political and Social Sciences, Freie Universität Berlin, in Berlin. Bettina is an editor of ROAPE.