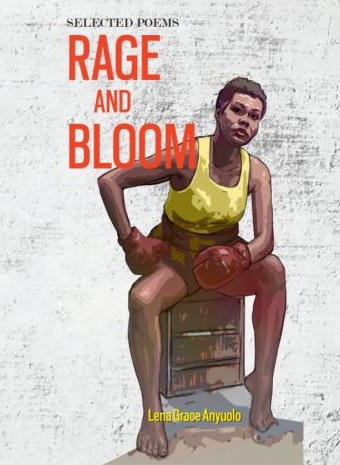 Lena Anyuolo is a Kenyan writer, poet and feminist who lives in Nairobi. She specialises in human rights work, political activism and environmentalism. Rage and Bloom is Anyuolo’s debut collection of poems and tackles patriarchy, revolutionary contradictions as well as hope for a better tomorrow. Stuart T A Bolus celebrates a collection of poetry that speaks to the 21st century of pure unapologetic African love.

By Stuart T A Bolus

This collection of striking poetry leaves a deep impression on the reader that lasts long after you put this collection down. Lena Anyuolo truly knows how to transport the mind of the reader into the many situations that they find themselves in these collections of short but evocative poems.

There are recurring themes throughout, revolution and its often-disappointing conclusion, the power that sex holds over individuals, and of loss. Each theme is partitioned into different chapters of the poetry anthology. The first chapter Rage covers the anger of a young revolutionary angry and bitter that the promised utopia hasn’t arrived. The second chapter Transition sets a different tone while some poems still carry the hot anger of the previous chapter focusing more on the personal loss of the individual, of a lover’s last embrace, and protests that end with the loss of a loved one. The final chapter Bloom takes on an almost ethereal tone where the time and space of the poems are never truly defined, more a stream of consciousness with thoughts that tackle topics ranging from the resting place of fallen comrades to a soliloquy to the moon at the dead of night. For a short anthology, it captures a lot of emotion and heartfelt meaning which must be commended.

Revolution and the false hopes that comes with it is dealt with in almost heart-breaking ways. One poem in the chapter Rage “B802” Marxist dialectics are mentioned almost simultaneously with the act of taking drugs as if to emphasise that the rush of narcotics mirrors the rush of revolutionary fervour that can take over a person’s mind. One wonder’s if the cold turkey of revolution lurks in the author’s psyche. The poem juxtapositions the young idealistic Marxist getting driven in fancy cars and discussing left-wing theory while surrounded by luxury shines light on the absurdity of the situation. The author captures the hypocrisy of the upper classes who talk revolution yet clearly benefit handsomely from the status quo.

In the second chapter Transition two poems stand out, “Childhood” where a simple statement that childhood isn’t simple unfolds to a tragic ending where one is confronted with the allegations of patricide. Such a shocking turnaround of events characterises a lot of the work in this collection. It stays with you long after you’ve set down the book and taken a moment to think about what you have just read.

In contrast, the poem “Loomis Heads” detailing the aching for lost love is soft yet peppered with moments of vulgarity that shows us that love is not always high-minded and is always partly based on base impulses as well as any notions of romantic love that one thinks of. It was a very refreshing take on love poetry that speaks to the 21st century of pure unapologetic African love, devoid of wanting to be accepted, but simply being raw and therefore, real.

The final chapter Bloom occupies the most dreamlike state of the chapters, tapping into conscious thoughts. “Saba Saba” where the author lists all the female activists and revolutionaries they admire from Kenya, Morocco to China and beyond, creating a sense that they are all from one family fighting for the same cause across different nations. The final words “Homeland or death! We shall win!” on the fight against patriarchy really puts fire in the soul and highlights that although our struggles are eternal they will never stop being waged until our objectives are realised.

This book was heavy on the heart but I’m glad that I was able to read it. One can almost feel yourself on the Kenyan streets, Swahili spoken in the dusty pathways while lovers catch glimpses of each other from their windowsills. The ache of lost love that is all too familiar is felt on these pages and the bitterness of revolution that never arrives is palpable. The author has extraordinary talent and I very much look forward to more work from her in the future.

Stuart T A Bolus is a British-Ghanaian MPhil graduate of the Centre of African Studies at Cambridge University. He is also the author of the chapter featured in Critical Insights: Post Colonial Literature, writing the chapter Obliteration or Assimilation? Culture Clash in Chinua Achebe’s Things Fall Apart and Arundhati Roy’s The God of Small Things.