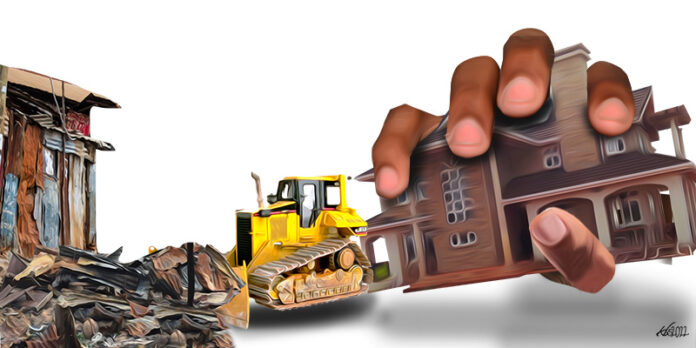 Nairobi remains a monument to the colonial project of discriminatory citizenship, inequality and structural violence. For decades under British colonialism demolitions of ‘illegal’ housing became the norm. Mwangi Mwaura explains that current demolitions in the city are justified under the banner of cleaning-up and building the city to attract investments.

Constant demolitions of homes, structures and other infrastructures have become a norm in most African urban areas. These demolitions are classed. This can be observed by studying the ongoing (re)construction of a Shell petrol station in Kileleshwa, on the affluent side of Nairobi, Kenya’s capital. The petrol station is under reconstruction at the exact location it was deemed illegal four years ago. This prompts us to reflect on race and class in Nairobi’s demolition history. A reflection that shows how the landscape of Nairobi is not only an archive of British colonialism but is a continual perpetuation of the colonial project of discriminatory citizenship, inequality and structural violence.

During British colonial rule the now affluent areas of Nairobi such as Kileleshwa, Westlands and Karen were reserved for white colonialists. Africans were only allowed to enter them to offer their labour under strict scrutiny imposed through the Kipande identification system which tied them to an employer. The African population was to be a transitory workforce in Nairobi, not a permanent one. But as time went by and more Africans came to the city, they started building houses in the east side of the city because neither the authorities nor their employers provided housing. Demolitions soon became a norm in these areas, where “African villages” were constantly set on fire to, in the words of Wangui Kimari, to “make the city legible to empire—racially, spatially, ecologically, and economically”.

Current demolitions are justified under the banner of cleaning up and building the city to attract investments. Projects set under this banner often include roads, for example the recent building of the elevated, 17-km-long expressway connecting affluent sides of Nairobi with the airport. Demolitions for construction of a link road connecting an industrial area to the expressway in 2021 caused a humanitarian crisis as about 40,000 people were left homeless, and forced to fight back on the street, in one of the popular neighbourhoods, Mukuru Kwa Njenga. The other set of projects that involve demolitions are heralded as restoring the “green city under the sun” and often include efforts to clean the Nairobi river.

In 2018, there was a marked increase in demolitions on ‘riparian land’ – this is land which is adjacent to rivers and streams and is subject to periodic or occasional flooding. The demolition spree was led by a multi-agency task-force consisting of the then newly formed Nairobi Regeneration Committee, along with the National Environment Management Authority (NEMA) and the county government. Here, they argued, they were recovering riparian land from illegal land grabs. In August 2018 buildings in different parts of Nairobi were bulldozed. What was new and unexpected to most Kenyans was that some of these demolitions were in the affluent suburbs. For example, news of demolition of a Shell petrol station and adjacent Java House cafe at Kileleshwa, and the Ukay mall sparked shock amongst the investors and on social media. These buildings and others caught up in that phase of demolitions were claimed to be on riparian land.

However, it is important to note the fragmented governance of riparian land in Kenyan laws. Confusion exist on how to measure riparian land. There are overlapping mandates for their protection in at least eight pieces of legislation passed by parliament over the last decades. These are sometimes contradictory. For instance, the 1999 Environmental Management and Coordination Act defines it as ranging from a minimum of 6m and a maximum of 30m from the highest watermark while the 1989 Survey Act recommends 30m from tidal rivers. These fragmented and incoherent laws and policies continue to cause confusion. They have also created a legal loophole which the authorities and Kenyan elites have exploited to order demolitions and land grabs over the years.

During such demolitions, heavy security is used. This demonstrates the normalised structural violence. The 2018 riparian demolitions were also executed in the early hours of the morning or at night, causing great insecurity and vulnerability. Court orders and legal title deeds by residents are often ignored, leaving residents to fend for themselves and with no compensation.

However, after exactly four years, the Shell petrol station demolished in August 2018, is currently under reconstruction in exactly the same location with permission and licence from the necessary agencies, including NEMA as seen from the construction site board (see image below). During its demolition the official statement by the environmental management body was that it was encroaching on riparian land and was also on a road reserve. Its reconstruction demonstrates the recolonizing nature of demolitions in Nairobi: when they are enacted against the working class they are permanent but when carried out in affluent areas they are only temporary with loopholes that the elites can exploit to rebuild or receive compensation. 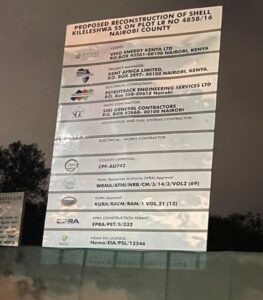 In her book, The Struggle for Land and Justice in Kenya, Kenyan legal scholar Ambreena Manji explores the law relating to land and its administration. She studies the country’s rich but scattered ‘land archive’ through which she shows how land law has been the most emotional part of Kenyan laws. She further shows that the struggle towards land justice is ongoing in a variety of different ways, including through case laws. In regards to urban demolitions, some optimism about the possibility of ending demolition or moving towards the creation of a proper compensation structure can be seen in recent court judgments.

In the case, Mitu-Bell Welfare Society v The Kenya Airports Authority, the court noted the discriminatory aspect of demolition by pointing out that while the informal settlement, Mitumba village near Wilson Airport, had been demolished, adjacent multi-story buildings were left untouched.The judgement demanded that demolitions are accompanied by reasonable alternative accommodation.

Building on this precedent is the judgement in William Musembi vs The Moi Educational Centre Co. Ltd lodged by residents of two informal settlements who had faced the bulldozers in 2013 after occupying the pieces of land in 1968. The Supreme Court noted that even when the residents did not have the legal titles to land they acquired a protective right to housing through occupation.

Together, these judgments if respected, may lead us to urban land justice. But this will require an end to the recolonizing aspects of demolitions that has normalised the near-constant demolitions of homes and structures in working class neighbourhoods of Nairobi.

The author would like to acknowledge and appreciate the support of Ambreena Manji in reading earlier drafts of this text.

Mwangi Mwaura (@MwangiMwauraL) is a researcher affiliated to the Centre for Human Rights and Policy Studies (CHRIPS), Nairobi, Kenya.