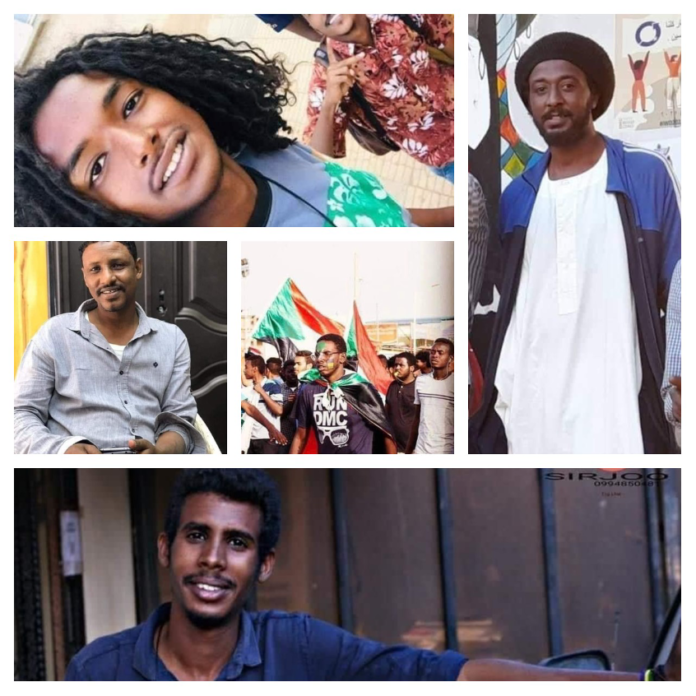 Following the murder of revolutionaries this week, Sudan’s resistance committees called for civil disobedience and a general strike. Sara Abbas writes about the massacre of revolutionaries on 17 January. We also include the joint statement of the Khartoum State Resistance Committees Coordination.

This week has been incredibly painful for Sudan. On Monday seven revolutionaries were killed in the protests, and many other protestors are badly injured and are fighting for their lives. Since the coup on 25 October 2021, 71 revolutionaries have been killed. The photo above is of five of the young revolutionaries killed on 17 January.

The military is ramping up the violence, and it is only going to get worse. Hospitals in Khartoum have been getting attacked for weeks now, medics are regularly beaten, tear gas deployed inside the premises, and injured protestors arrested (as in kidnapped from their beds). A massive hike in electricity prices recently shows the regime has a cash problem. The recent killing of a police officer was blamed on a young revolutionary, who has been arrested. It’s clear to most Sudanese that the killing was carried out by elements of the regime to justify the barbaric use of violence, including the use of anti-aircraft weapons, against human bodies, sound bombs, live ammunition, and the deliberate firing of tear gas canisters at the heads and faces of protestors (on Monday this week all the deaths were by bullets but a lot of deaths in recent weeks have been due to trauma from the impact of gas canisters to the head). Resistance committee members in the last week have faced a more aggressive than usual campaign of arrests.

In response to the bloody day, and the escalating repression, the revolutionary forces on Monday announced two days of mass civil disobedience, which started on Tuesday 18 January in preparation for a general strike. Doctors’ unions also announced full withdrawal for three days (18-19-20 January) from all military and security owned hospitals, and a strike of three days from “cold” non-urgent cases in all hospitals.

Please see the link to the original Arabic text here.

A new massacre has been added to the massacres of the military coup d’état against the Sudanese people. Until now, we have lost seven revolutionaries [today] and we consider them martyrs who live among us. Until this moment, we are still counting our wounded; there are many serious injuries with live bullets and tear gas canisters aimed at the faces of the revolutionaries. Daily, the coup council and its militia allies reveal to the world and to the Sudanese who wrongly imagine some good will come out of this, that the council are just gangs that call themselves a state. They steal our resources to kill us, they arm their soldiers at the expense of bread, health, and education in order to spread bullets in the streets. This is not our army, they are the enemies of the Sudanese, and it is necessary to resist them until we win, or they rule an empty country after they have killed us all. This is our covenant with the martyrs.

We call on all the revolutionaries to completely close Khartoum and erect barricades everywhere. Our barricades terrify them and remind them that we are the strongest and largest army in this country. We call on all professionals, employees and workers everywhere to establish their committees in the workplace, and to coordinate well between those committees and the resistance committees in preparation for the general strike and the implementation of civil disobedience on 18-19 January.

We call on the revolutionaries in all the neighborhoods of the country to prepare for a long battle in which we defeat the militias, based on our good preparation of our organization, on the continuation of the announced [civil disobedience] schedules, and on the arrangement of ad-hoc schedules according to what the women and men revolutionaries see [happening] in their neighborhoods.

We will publish our next steps in response to 17 January massacre. This massacre will not go unnoticed. We are the generation that was destined to write the end of the military coups, and we will not postpone this battle. The action is what you see and not what you hear.