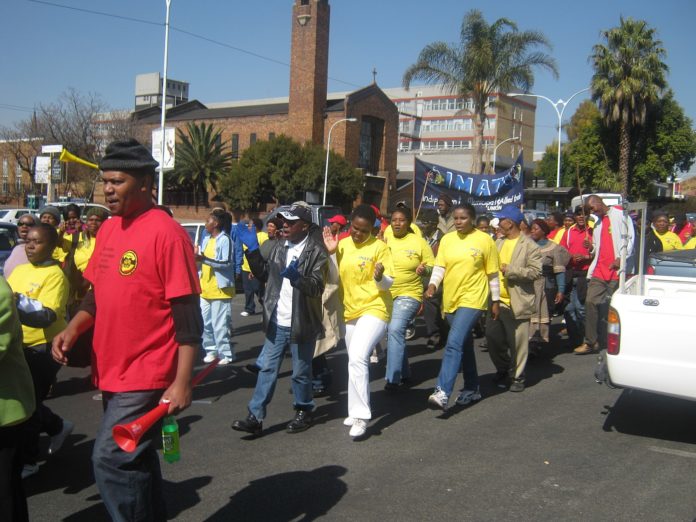 ROAPE’s Ruth First prize winner, Lawrence Ntuli, writes about his journey into activism and research. Ntuli’s political activism and research combine to a single objective – helping to advance the struggles of the working class in South Africa. His research into precarious workers who fought through the union and those who engaged in struggle without being led by trade unions was the 2020 winner of the prize.

I was born and grew up in the working class township called Tsakane, located in the far east of Johannesburg, South Africa. Immediately after finishing from high school, in 1996, I became a student of politics and economics at Wits University, Johannesburg. I joined student struggles at university and ultimately I became a member of the South African Student Congress and later I joined a socialist student organisation. I became an activist during a period in which the university was introducing a swingeing neoliberal restructuring plan, called Wits 2001.

In that period, the restructuring plan formed part of a broader programme to transform Wits into a neo-liberal university, orientated towards profit-making and partnership with big business. As a result of this restructuring, tuition fees became unaffordable and many students from poor and working-class backgrounds were kicked out. Similarly, ‘unprofitable’ courses were closed, and some academic posts were frozen resulting in more than 50 academic job losses. Coupled with this, the university outsourced or privatized services it considered as ‘non-core’ and as a result close to 613 workers were retrenched.

However, some of these retrenched workers (250 workers) were re-employed by new private companies which were awarded contracts by the university. As we expected, these workers lost all benefits, wages were halved, and they were not allowed to join a trade union. In other words, the conditions and wages of these workers rapidly worsened compared to when they were previously employed directly by the university.

Yet the effects of university restructuring created favourable conditions for students to build a united front together with the workers. Thus, workers and students formed what was called the Wits University Crisis Committee which ultimately led several protests at the university against restructuring and high tuition fees. I was part of this Committee and helped organise and coordinate the protests.

It was during this time that I began to campaign against precarisation of work, in addition to campaigning for affordable and accessible education. Unfortunately, our struggle was not strong enough to defeat either restructuring or prevent precarisation of work. We only managed to delay the implementation of outsourcing, but in the end we lost the battle – outsourcing went ahead.

Subsequently, together with other student activists, we decided to continue supporting workers who entered precarious employment because of outsourcing. In addition to supporting a demand for the reversal of outsourcing, we also supported their struggle for better conditions and wages including the right to join and form a trade union. With this in mind, we supported several general meetings and protests organised by precarious workers. This experience without doubt stirred my interest in the struggles of precarious workers – in this sense my activism and research are entirely linked.

After I left the university, I continued to support worker struggles. Hence, I became active in the now defunct Anti-Privatization Forum (APF). The APF was a social movement which was made up of 21 Community based organisations fighting against the effects of neo-liberalism, for example, outsourcing and privatisations. In the APF, I assumed the role of labour coordinator. This role allowed me to work with various types of precarious workers. The vast majority of these workers were either unorganised or lacking trade union representation, those who were unionized were rarely serviced by their trade unions. In other words, trade unions did not address their grievances, or respond to their demands. As a result, we gave them various types of support including writing and printing leaflets for them. Most importantly, we organised community organisations affiliated to the APF to support their struggles. For example, when they were involved in a strike, we built support and solidarity for the strike.

Around 2007, I was employed as a Publication Officer at the National Education, Health and Allied Workers’ Union (NEHAWU). NEHAWU is a trade union in South Africa with a membership of 235,000, it is the largest public sector union in the country. It organizes state, health, education, and welfare workers. I worked for only nine months with Nehawu.  Afterwards, I was employed as a director (of research and program monitoring) by the local government department – Gauteng Provincial Government.

Even though, I was employed by the government, I remained in touch with workers struggles and I supported several protests. This continuous association with workers motivated me to pursue a doctoral degree on the union response to precarisation of work, focusing on South African Municipal Workers Union (SAMWU) and the union’s resistance to privatisation in the period between 1999-2003. At the same time, my interest in workers struggles made me to leave government employment and join SAMWU as a national research officer.

SAMWU is the largest trade union in the local government sector and affiliated to the Congress of South African Trade Union (COSATU). It was one of the trade unions which fought strongly against privatization in the 1990s and 2000s, but it lost this fight. Both privatisation and outsourcing in the local government sector continued unabated. Increasingly outsourcing took different forms in different municipalities and even within a single municipality. For workers, privatisation threatens trade union representation, collective bargaining, job security, pay, benefits, occupational safety, and health protection.

With the previous experience of working with precarious workers, in SAMWU I work in the field of precarisation of work, write and put together articles and booklets, and organised workshops, etc. The rationale was to aid various union campaigns against precarisation of work.

So, in one way or the other, my work in the field of  precarisation of work led me to conduct research on the subject, with the title The strategies and tactics of fighting against precarisation of work: a comparative study of precarious workers’ struggles in two South African municipalities. In fact, this research was focused on ascertaining the tactics or strategies which can assist precarious workers to win in their struggles. The conclusion was that precarious workers prefers to fight via the trade unions, not through other, alternative forms of organisations such as cooperatives or NGOs, as other writers have argued elsewhere. When precarious workers fight back independently, it is because trade unions have refused to represent them and not because they seek to build alternative forms of organisations. The workers who were studied were convinced that only a trade union could win both better pay and conditions.

As an activist, I am thrilled to be chosen by ROAPE as the winner of the Ruth First Prize. Most importantly, it is an honour to be associated with a journal which is known for supporting radical transformation. At the same time, I am also delighted to win a prize inspired by the work of Ruth First, a Marxist whose life was committed to the struggle against class and racial oppression. The Ruth First Prize without doubt will boast my confidence to continue research that is focused on advancing working-class struggle.

Lawrence Ntuli is employed as a researcher by the South African Municipal Workers’ Union (SAMWU) and is currently completing doctoral studies. He is an activist and his areas of research includes precarious work, trade unions and local government. Ntuli is writing a history of SAMWU with the Neil Aggett Labour Studies Unit at Rhodes University.