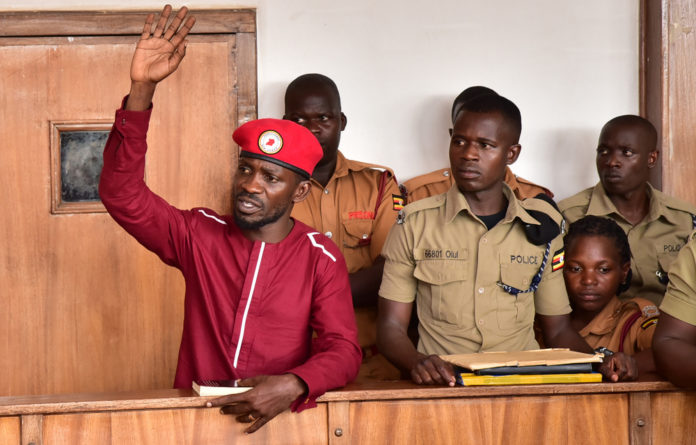 Robert Kyagulanyi Ssentamu – better known to the public as Bobi Wine – is a singer turned politician who is currently campaigning in the general election to oust Uganda’s President Yoweri Museveni who has been in power for more than 30 years. Pitasanna Shanmugathas looks at the elections and the hope for a better life in Uganda.

Bobi Wine, with a widespread following and popularity among a significant segment of the Ugandan population, has emerged as a strong challenger to Museveni. As a musician, many of Wine’s songs take a socially conscious tone by speaking out against poverty, and in favor of freedom and democracy for Ugandans. Wine grew up in one of the nation’s poorest neighborhoods in the capital city of Kampala and his rise from poverty to being a successful singer, and then an elected Member of Parliament, has been viewed as an inspiration to many of his followers who regard him as ‘the Ghetto President’.

Since Wine’s election as Member of Parliament in 2017, he strongly opposed authoritarian measures imposed by Museveni such as the President’s decision to remove the Presidential age limit and Wine publicly rallied against the President’s decision to impose a social media tax to stifle opposition towards him on WhatsApp, Facebook, and Twitter. During this time, Wine also created a national movement called “People Power” – a movement consisting of, as The Economist describes, “a messy coalition of established politicians, frustrated graduates, and the hustlers of his ghetto hinterland.” The purpose of the movement is to bring awareness to Museveni’s rule and to challenge conventional politics. In response to Wine’s public demonstrations against Museveni, Wine has been subjected to state-sanctioned torture and repeated arrest.  Most notably, in August 2018, allegedly on the orders of President Museveni, the Ugandan Security Forces fired live bullets into a crowd of Wine supporters, killed Wine’s personal driver, invaded the hotel that Wine was staying in and proceeded to arrest and subsequently torture him and his colleagues.

On 24 July, 2019, Wine announced his bid to run for president in the 2021 general election. In July 2020, Wine announced himself as the leader of the rebranded and previously obscure political party, the National Unity Platform (NUP). The formation of such a party, with its conventional structure and authority over candidates, comes in contradiction with the spirit of Wine’s People Power movement aimed at challenging conventional politics. In addition, it has been reported that Wine’s new party has engaged in transactional politics. For instance, Derrick Ssonko, who is a mechanic, felt inspirited to run for local councilor, “but the party ticket went to a rival who paid a bribe. He worries that the NUP is ‘old wine in new bottles’ even though everyone he knows will vote for it.”

Most recently, the United States’ Secretary of State, Mike Pompeo, publicly condemned tactics within Uganda to suppress free and fair elections. In addition, Eliot Engel, the chairperson of the US House Committee on Foreign Affairs, has requested that the US impose sanctions on several Ugandan security officials in response to “a worsening of human rights in the country.” There are serious doubts as to whether Uganda can legitimately hold a fair election given the overwhelming control that Museveni wields over public institutions.

The European Union (EU) in November 2020 said it would not deploy an observer mission to monitor the Ugandan elections due to the Ugandan government’s refusal to implement recommendations previously made by the EU which would “make the poll body more independent,” result in the  “elimination of excessive use of force by the armed forces and more transparency in tallying.”  Chrispin Kaheru, a Kampala-based political analyst, asserted that “what the EU observers do is to add an international flavour of scrutiny, that element now will not be there in 2021.”

Bobi Wine, in order to ensure greater transparency in the upcoming elections, has launched an app called “U Vote” designed to monitor the election results and aid “in their personal tallying of the votes.” The app, U Vote, Wine has stated “was developed with sophisticated technology and can be downloaded [from the Play Store] by all voters to make sure that votes are seen as they come from various polling stations.” On 2 January, 2020, during the end of year address at his home, Wine asserted that Ugandans “have experienced a lot of vote rigging for a long time and now we want to be in charge of everything. All polling agents will just have to take a picture of the DR form and upload it there and then. We shall do our own vote tallying”

Uganda consists of a nation where 80% of the population is under the age of 35, and for these individuals, Bobi Wine brings a great deal of hope for a better life. The disparity in the demographics has created a generational divide whereby Museveni is viewed as unpopular among the youth but is viewed as popular among older rural voters who view regime change as “a hauntingly perilous idea”— linking such change to the years of bloody horror that preceded Museveni. However, it must be met with cautious optimism whether, as a politician, Wine would be able to deliver on his promises or whether Wine’s victory would mean a continuation of corrupt politics.

In Wine’s campaign manifesto he states, “Our promise to the youth of Uganda, we shall ensure we find meaningful employment for you. We want to create at least 5 million jobs. We shall invest in technology and a massive scale of industrialization……A vote for NUP is an assurance that citizens will never be persecuted for disagreeing with the government. A vote for NUP is a vote for the protection of our natural resources as a country which Gen. Museveni now treats as his personal wealth. A vote for NUP is a vote for the closing of the income gap between the rich and the poor…. Our promise to all Ugandans is that we shall safeguard their land. We shall put an end to the enormous scale of land grabbing. If it is done, justice must prevail… The National Unity Platform is committed to working with all Ugandans to improve their lives. We believe that immediately after taking over government, every Ugandan from Kaabong to Kisoro, from Yumbe to Busia will experience meaningful change in their way of life……”

Despite such progressive electoral promises, it remains publicly unclear as to how Bobi Wine proposes to accomplish them. Wine’s political headquarters has images of pan-African heroes like socialist leader Thomas Sankara, but Wine has also been known to collaborate with free-market thinktanks. Wine said that his goal is to rebuild public institutions and end decades of personalized rule, but Wine himself has also said, “I don’t have a very radical programme.”

In 1992 President Museveni published a book entitled, What’s Africa’s Problem?—in which he stated, “The problem of Africa, in general, and Uganda in particular, is not the people but leaders who want to overstay in power.”  Bobi Wine’s call for freedom, democracy, and prosperity for Ugandans were the same political views that Museveni had once politically embraced long ago, but gradually, with time, Museveni became an authoritarian leader—if  Bobi Wine won, would he be capable of ending the repetition of that cycle?