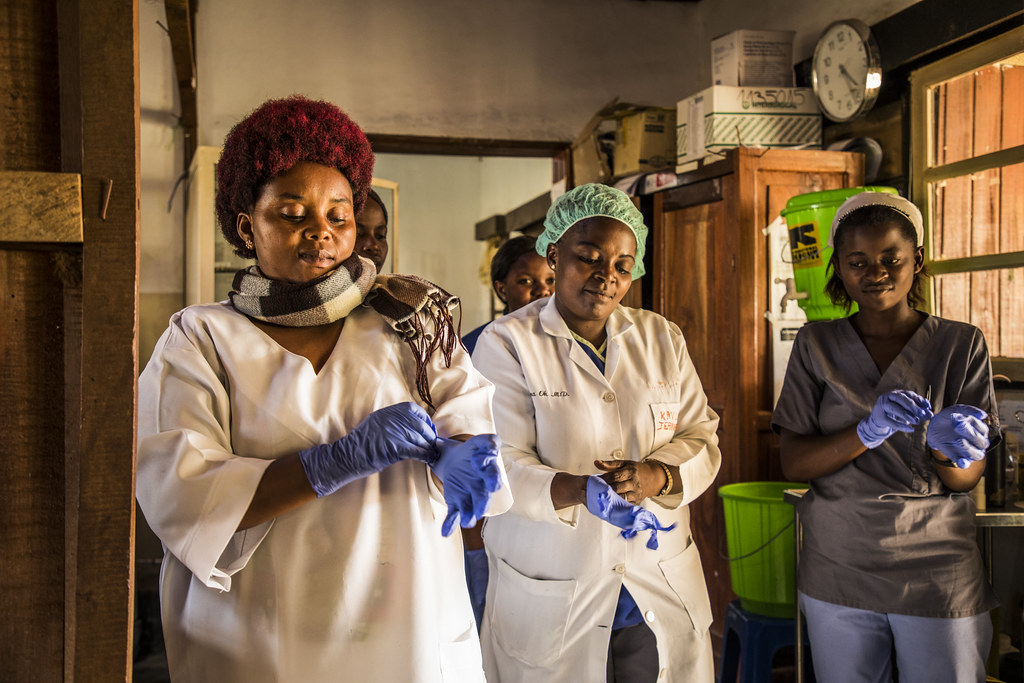 The Covid-19 pandemic has laid bare the inadequacy of mainstream arguments concerning the role of the African state in addressing existing health inequalities. In this blogpost, Joan Nimarkoh highlights the potential reawakening of progressive models for health delivery centred on the needs of poor as the pandemic exposes the stark inequities of privatised health systems.

Pushing the boundaries of possibility is nothing new for African governments and people are used to turning the region’s energy and ingenuity to overcome adversity. This is very evident in Africa’s response to the worst global pandemic in over a century. Figures on the impact on the coronavirus pandemic in Africa were predictably bleak. Western government and development agencies braced themselves for an avalanche of virus cases, high death rates and a vast humanitarian aid bill amounting to billions of dollars.

In a familiar pattern of Afropessimism the global media reported looming humanitarian and economic crises with estimates of over 190,000 deaths.

Against the odds a different narrative of Africa emerged, as the region effectively stemmed the spread of the virus and avoided the mushrooming death rates suffered elsewhere. Some African governments worked quickly to inject emergency funding for the procurement of equipment and resources while rapidly establishing systems for national tracking and diagnostics.

Yet empowered by the state, security agencies across the region were guilty of a series of civil rights abuses in order to implement severe lockdowns targeting urban poor communities. In the name of fighting the pandemic numerous African governments put aside human rights protections, highlighting the dangers of side-lining grassroots organisations in delivering key public health interventions.

Nevertheless, the notable scope of state centred interventions implemented across the region to beat the virus raises the prospects for future health sector reform while highlighting the shortcomings of declining public investment in fragile and overstretched health services. Importantly, promoting health rights is paramount in widening access for vulnerable groups and in particular the informal poor who carry the burden of high healthcare costs and poor public health provision.

Currently Africa’s health sector faces numerous challenges which disproportionately impact on the poorest most marginalised groups. Inadequate public investment in health infrastructure and human resources have been worsened by widespread privatisation. As a result, access to affordable healthcare sharply declined as the number of health workers plummeted. In 2018, there were only 3.8 doctors per 10 000 people in Nigeria and less than 1 in Ethiopia and Senegal – well below international averages.

Government action on disease control and prevention has lacked weight, neglecting the impact on the poorest households struggling with recurrent costs of treatment and limited access to local health services. Progress on malaria which kills 400,000 Africans yearly has in some countries been reversed. The UN report that there were 3.5 million more cases in 2017 in the 10 most affected African countries than in previous years.

Large health inequalities exist between social groups who have uneven access to life saving treatments particularly for women and children.

Moreover, vast class disparities in health outcomes have outlined the extent to which health policy has been framed around urban-centred more affluent households at the expense of the informal rural poor. Lack of public commitment over affordable public health provision is commonplace across the continent despite modest public health subsidy schemes designed to meet basic coverage such as the National Health Insurance Scheme in Ghana, and similar initiatives in Uganda and Kenya.

More than two decades of liberalisation reforms have gutted Africa’s health sector, depriving it of billions of dollars of state financing while policies promoting the privatisation of health have offered lucrative market access to global health insurance companies providing access to services based on income rather than need. As a consequence, a large proportion of African society remains locked out of basic health coverage.

Progressive healthcare reform in Africa must be founded on principles of universal health access embedded in sector nationalisation. State financing of public health resources should also be aligned to the redistribution of tax revenue from private institutions which fail to widen access to less privileged vulnerable groups. Raising national levels of state funding to health could be achieved by honouring the Abuja declaration commitment of a 15 percent share of GDP to be allocated to health expenditure.

Redistribution of resources alone will not address poor capacity of health institutions away from urban centres. A massive effort is needed to recruit, train and deploy thousands of health workers to address local disparities between rural and urban areas and ensure better availability of local services.

Civil society actors can play a fundamental role in establishing bottom up mechanisms for health frameworks by ensuring state agencies maintain agreed standards for improved health outcomes by monitoring critical areas such as treatment and drug costs and availability of targeted care and outreach networks for vulnerable groups.

Some health organisations have long campaigned for a reorientation the region’s health sector which places deprived communities at the heart of government strategies through up-scaling of public health programmes for vulnerable groups alongside efforts towards national health coverage.

The People’s Health Movement, a campaign group, calls for African governments to promote health financing that protects the poorest from crippling treatment costs. Its statement on Universal Health Coverage highlights the need for a policy shift, pushing for ‘financing systems that eliminate out-of-pocket expenditure by strengthening prepayment mechanisms that pool resources, for instance financing from general or targeted tax revenue without charging users.’

Calls for change have gathered momentum as the benefits of community-based bottom up approaches to Africa’s unique context for equitable health delivery become evident. Pressure is likely to grow even further as demand builds for universal protection from the possible threat of a second wave of the pandemic later this year.

Africa’s response to the coronavirus has pushed forward the notion of widening state intervention in the health care sector, by demonstrating the potential for positive change where political commitment is sustained.

Reversing the role of the private sector in health care delivery will require de-emphasising the prominence of market-based ideologies in determining equitable and accountable health systems that cater to the needs of those marginalised from existing private health provision.

Guaranteeing health care rights for all through massive public investment in Africa’s health system is paramount for improving health service coverage by establishing a new social contract on health centred on the poorest most vulnerable communities.

Achieving such a policy shift is by no means inevitable but will rely upon the success of grassroots movements and activists pushing for radical health care reform as Africa moves into a post-pandemic future.

Joan Nimarkoh is a writer and freelance journalist specialising in African affairs. Her interests include democracy, radical development frameworks and gender equality.

Featured Photograph: Health workers in the DRC put on gloves on before checking patients at the hospital (Vincent Tremeau).