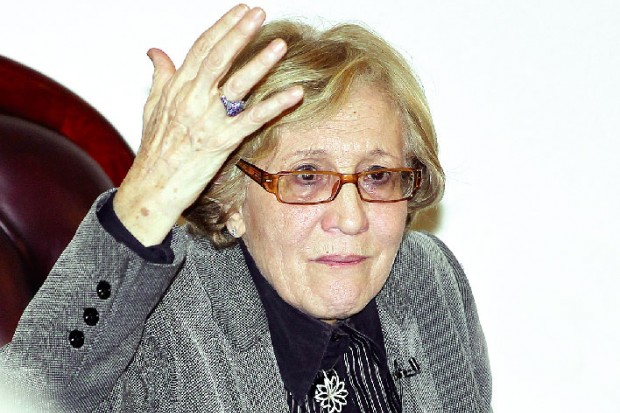 It has been 60 years since Zohra Drif set a basket loaded with a bomb under the counter at the busy Milk Bar in French-colonized Algiers, an act (later immortalized in Gilles Pontecorvo’s 1967 film Battle of Algiers) that set off the intense, violent period of 1956 and 1957 known as the Battle of Algiers. In 2017, now an elder stateswoman in independent Algeria, Mme. Drif says, “I will never apologize.”

Drif spoke to a packed room at Georgetown University’s Mortara Center for International Studies in Washington, DC, on September 19, and the circumstances surrounding her showed clearly the shift in Americans’ framing of the Algerian independence struggle. The occasion was the launch of an English translation of Mme. Drif’s account of the revolution: Inside the Battle of Algiers: Memoir of a Woman Freedom Fighter (available in paperback and ebook formats from Just World Books in the US and from Amazon in the UK). This writer had the honor of serving as the book’s editor; its translator, Andrew Farrand, sat at Drif’s side as her interpreter for the event. To her right sat Georgetown African Studies professor Lahra Smith and Ambassador Joan Polaschik, who recently finished serving as the US ambassador to Algeria and is currently Principal Deputy Secretary of State for Near East Affairs. Proceeds from the book sales went to the Just World Education Foundation, a US-based nonprofit dedicated to justice and equality in the Middle East.

Drif spent the revolution as a bombiste, living in hiding in the Casbah with a band of National Liberation Front (FLN) revolutionaries including Ali La Pointe and Yacef “El Kho” Saâdi. She was caught by the French in 1957 and spent five years in prison; she was condemned to death, but was released upon the victory of the revolution. She later married Rabah Bitat, another legendary militant whom she met in prison. The book tells the story of her joining the FLN and their combat in the mazelike streets of the Casbah up to her imprisonment, with a narrative that reads like a thriller yet never sacrifices its political and moral clarity. 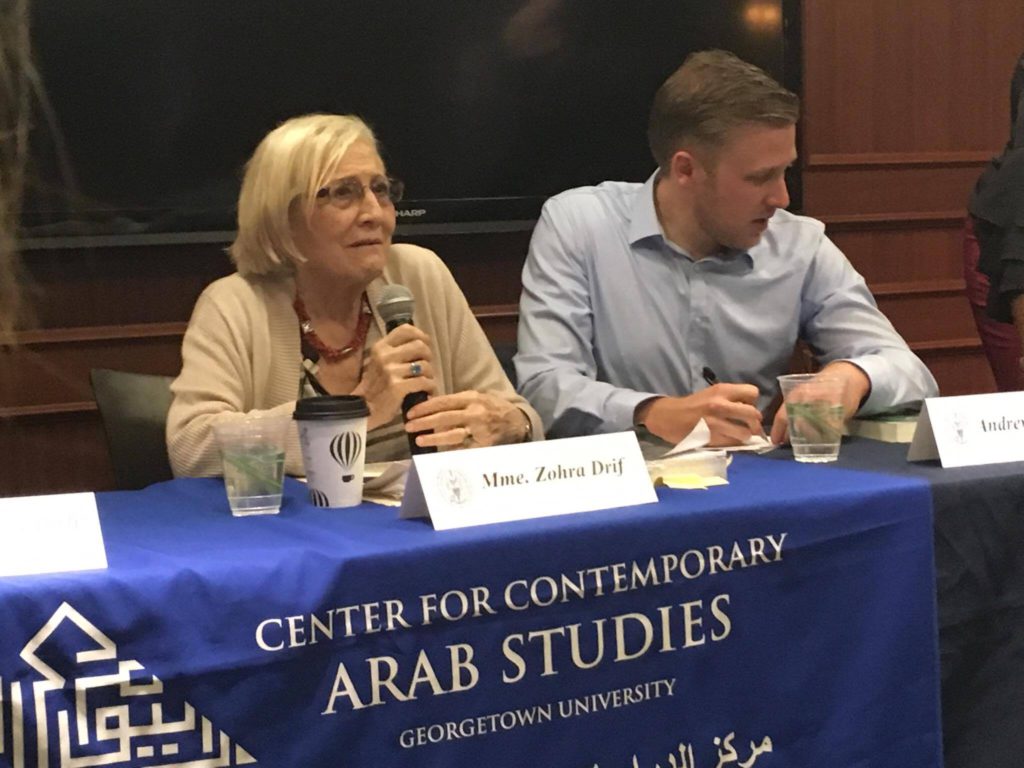 Zohra Drif speaks in Washington about her memoir Inside the Battle of Algiers, next to her is the translator Andrew Farrand

Mme. Drif, now in her eighties, explained in her brief opening remarks that young Algerians often approached her in the street to ask why she and other revolutionary figures had not shared their stories with them. This surprised her; she’d assumed that they were learning the details of their country’s liberation struggle in school. When she actually read a current textbook, however, she was appalled at “how minimal and insufficient the telling of this history really was.” Many of her comrades who had died in the war had been nearly forgotten; others were now passing away in relative anonymity, their heroic deeds unknown to the generations that benefited from them.

“I felt I had a duty to our population,” she said, “to tell this story as simply and clearly as possible.” The book, published in French, was well received in Algeria, but few details of the liberation struggle have been available to Anglophones, even as debates rage in the English-speaking world about armed self-defense and the justifiability of revolutionary violence. The English edition of Inside the Battle of Algiers aims to change that.

On the panel, Smith gave a thoughtful analysis of the book’s gender politics, noting the many ways revolutionary Muslim women broke tradition for the sake of the cause and the deep solidarity among women that threads through Drif’s life’s story, from the early political education she received from older women at the hammam baths to the Casbah sisters who hid her, lying to the French paratroopers and risking their lives to protect her. Smith noted that the repercussions of women’s solidarity and participation during the revolution have had a profound effect on Algerian society today, and Drif emphatically agreed: “Women are complete citizens” in Algeria, she said, “with the same duties and rights as men, including the same obligation to contribute to our development.”

Ambassador Polaschik gave the State Department’s view, noting that Algerians today still remember John F. Kennedy’s support as a senator for Algerian independence. Official US­–Algeria relations soured after the revolution, as Algeria looked east to the Soviet Union for inspiration and support, Polaschik noted, though she did not discuss the inspiration many US social movements, most notably the Black Panther Party, took from Algeria; instead, she contended that the US and Algeria, both founded in anticolonial revolution, share a deep love for freedom and independence.

Polaschik also lauded Algeria’s counterterrorism efforts against Da’esh and Al Qaeda. This is, of course, a loaded topic in a forum dealing with a story of revolutionary terrorism; the United States has long blurred the lines between “terrorists” and “freedom fighters” in ways that benefit its own colonial efforts and political agenda, and in the book’s foreword, United Nations diplomat Lakhdar Brahimi (who went to law school with Drif) is careful to separate the FLN and ALN from the likes of today’s Islamists.

That tension also came up in the audience discussion, when a representative of the Journal of Palestine Studies noted that Palestinian American activist Rasmea Odeh was, as we spoke, being deported from the United States as a “terrorist” for her participation as a bomber in the Palestinian struggle in 1969. She noted that the Algerian revolution has always been a source of inspiration for Palestinians; what, she wondered, did Drif think of the gap between her own warm welcome from the State Department and Odeh’s treatment? 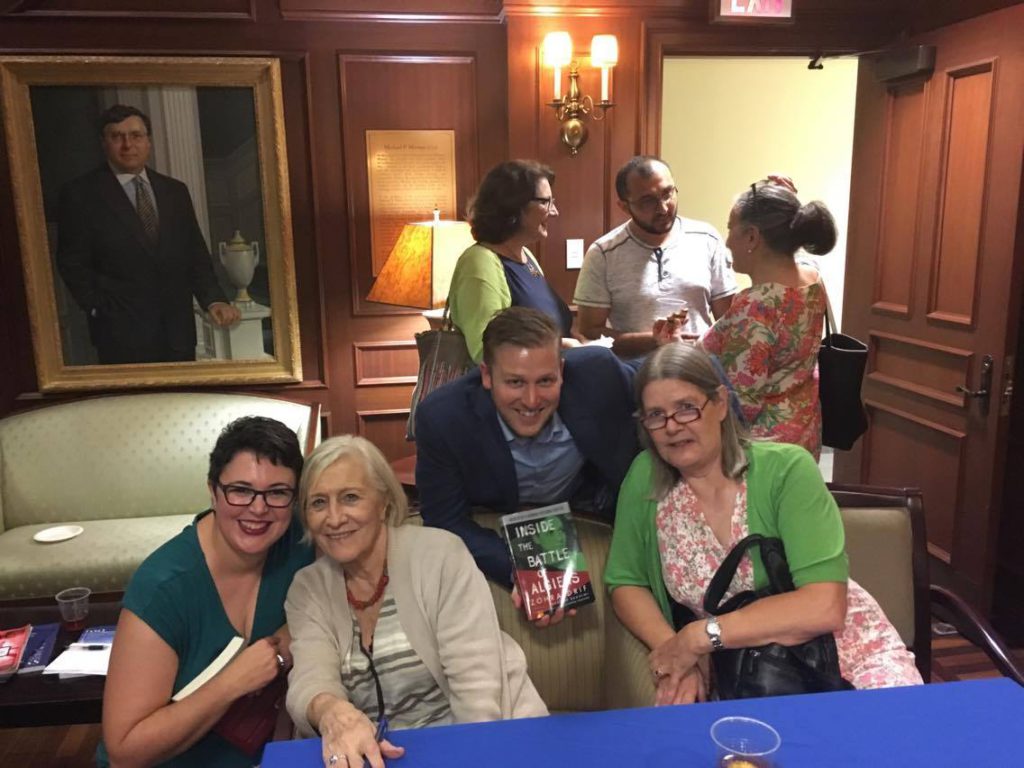 Up to this point, Drif had been relatively quiet: a gracious and charming speaker who modestly insisted that the credit belonged to all of her comrades. This question, however, roused the political activist Zohra Drif, who sat up in her chair and gestured as she spoke clearly and forcefully: “The Palestinian problem is also our problem.” As for the War on Terror, she said, “Really it is about Palestine. How can Palestinians fight but with the means they have at their disposal? If we’d had tanks and airplanes, we would have gladly used them, as the Palestinians would, and we would have called any destruction ‘collateral damage’ just as Israel does. But because they use what they have available to them, it is considered an act of terror. Only a people can create their own liberation. We must not apologize for this.”

She went on to describe another incident that spurred her to write her memoir. She attended a conference in Marseilles, she said, put on jointly by a French and an Algerian newspaper to commemorate the 50th anniversary of the war’s end. “I went,” she said, “because I thought perhaps some Algerians had turned the page too quickly. I wanted to pose some truthful and fundamental questions to the French participants. I was surprised, shocked, when I understood that I had been brought there to condemn the combat in Algeria. They wanted me to say, ‘Our cause may have been just, but our methods were reprehensible.’ Our methods—they were talking about me, about bombing! I will never apologize for using the only means available to us to free Algeria.”

Drif expands upon this point in the book, writing of her liberal critics’ distaste for violence that “a deep sense of honor and attachment to this greatest of values—freedom—would prohibit any dignified and honorable person from engaging in such question games if he or she has never lived in the cynically abject and unfair conditions” of colonial occupation under which Algeria had suffered for 126 years:

That was why, knowing the stakes full well in our hearts and souls, Samia [Lahkdari] and I made the choice to become “volunteers for death” . . . Perhaps the reader of today expects me to regret having placed bombs in places frequented by European civilians. I do not. To do so would be to obscure the central problem of settler colonialism by trying to pass off the European civilians of the day for (at best) mere tourists visiting Algeria or (at worst) the “natural” inheritors of our land in place of its legitimate children. I will not adopt this position because I hate lies and their corollary, revisionism, whatever they are and wherever they come from.

At eighty-three, Zohra Drif has lost none of her fire and passion. This was particularly evident in the enthusiasm of the Algerian American students in the audience, one of whom said her parents had told her, as “bedtime stories,” of Drif’s exploits in the Battle of Algiers. For all of us in the electric atmosphere of that room in Washington—American, Algerian, Palestinian, and others—Mme. Drif stands today as an example to the world of unflinching solidarity and courage under the direst of circumstances.

Sarah Grey is a writer and editor. She writes widely on language, politics, food and society from a socialist-feminist perspective. Her work on topics such as  reproductive rights, environmental issues, political economy, parenting, and labour has been published in a range of publications, including Jacobin, Salvage, Truthout, Bitch, The Frisky, The Establishment, International Socialist Review, Monthly Review, MRZine. Selections of Sarah’s writing can be found on her website here.