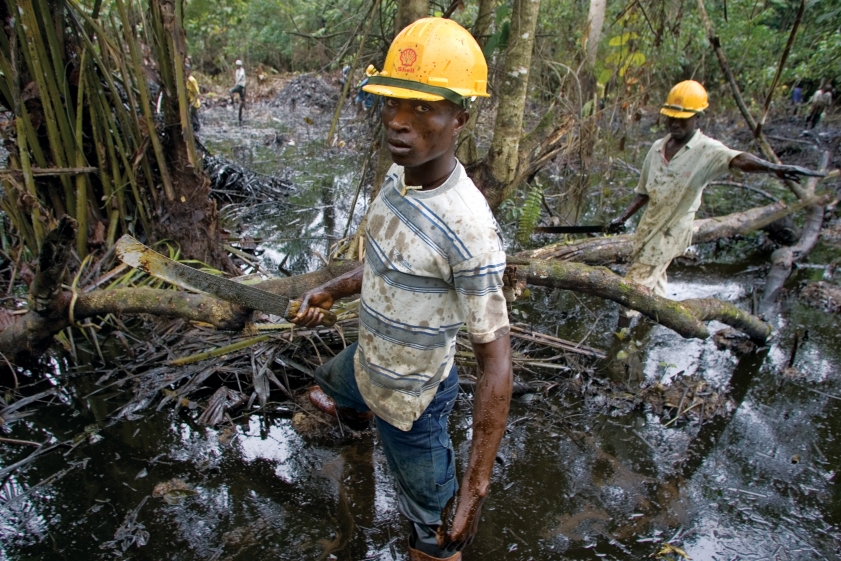 In the third in a series of blogs for roape.net, writer and activist Lee Wengraf exposes some of the myths about corruption in Africa. The notion of “African corruption” persists despite the reality of widespread and established practices of illicit activity in the West, and, crucially, the contribution and culpability of Western corporations and governments to ‘African’ corruption.

On February 13, newly-elected U.S. President Donald Trump signed a legislative order repealing a section of the Dodd-Frank Act that required disclosure of any funds received from foreign governments for deals in the extractive sector. Widely condemned as undermining transparency and anti-corruption efforts, Trump’s move facilitates corporate accumulation in oil, gas and mining; as the Economist notes, “[t]he major beneficiaries of the rollback” are oil majors like Exxon and Mobil. At the same time, however, the Dodd-Frank disclosure rules assume “African corruption” is the source of the problem, a phenomenon, as Obama implies peculiar to these “young nations.”

The U.S. and other Western countries readily condemn the supposed “lack of transparency” of African regimes. In reality, multinational corporations operating in Africa benefit from the weak regulatory infrastructure inherited from colonialism and reinforced by neoliberalism alike. Corruption on the part of local elites rationalizes international policies and regulations imposed on African states but camouflage ongoing exploitation and the legacy of those weak states.

“African corruption” rooted in siphoned oil wealth, for instance, has generated incessant handwringing by Western public officials and nongovernmental organizations (NGOs). Human Rights Watch, for example, launched a campaign in 2011 demanding the Angolan government provide an explanation for $32 billion suspected “missing” from the state oil company, Sonangol. Certainly Angolan government spending priorities have been dismal: its 2013 budget allocated 1.4 times more to defense than to health and schools combined. And undoubtedly African rulers and officials in oil-rich countries have accumulated vast amounts of wealth.

Yet the emphasis of international campaigns on “African corruption” and “transparency” initiatives have distorted possibilities for social change for ordinary Africans. Development economist Paul Collier, for example, offers a host of organizational and policy “solutions” such as reforming the tax system and building institutional capacity to manage the process.[1] However, the narrow focus of such policy approaches paper over the impact of historical forces such as the ability of African states to build that “capacity” and how that past has produced the conditions of “corruption.”

Inherited laws and policies have facilitated the theft of tax revenues and outward capital flows, illicit and otherwise. Grieve Chelwa of Africa Is a Country, for example, describes, “Malawi has a 60-year old Colonial-era Tax Treaty with the U.K. that makes it easy for U.K. companies to limit their tax obligations in Malawi. The treaty was ‘negotiated’ in 1955 when Malawi was not even Malawi yet. Malawi (or Nyasaland, as it was known then) was represented in the negotiations, not by a Malawian, but by Geoffrey Francis Taylor Colby, a U.K. appointed Governor of Nyasaland.”[2] Other historical examples include the longstanding case of U.S. oil companies in Nigeria whose “anti-tax campaign contributed to the regional and ethnic tensions that led to the outbreak of [civil] war.”[3] And African states – with legacy of colonial-era development patterns – tend to have weak infrastructure to enforce compliance.

Nicholas Shaxson argues that the year 1996 marked a “turning point” inside the World Bank, when its president, James Wolfensohn, put the issue of corruption on the “development agenda.”[4] Major organizations such as Global Witness established a transparency framework with early reports on human rights and blood diamonds, as well as the oil industry, and in 2002, they joined with George Soros to launch Publish What You Pay, a program to introduce legislation in Western nations compelling oil companies to disclose payments to host governments.

More recently, official circles have offered a broader understanding of “corruption” and its roots. A U.N. report from 2016 on governance and corruption in Africa argues, “Accounting for the external and transnational dimension of corruption in Africa facilitates strategic decision-making that is holistic and helps to tackle the problem of corruption at its root. Foreign multinational corporations often capitalize on weak institutional mechanisms in order to bribe State officials and gain unwarranted advantage to pay little or no taxes, exploit unfair sharing of rents, and to secure political privileges in State policies.”[5] They continue, “anti-corruption projects and initiatives all focus on cleaning up corruption in the public sector, which is often regarded as incompetent, inefficient and corrupt, while the private sector is portrayed as efficient, reliable and less corrupt. This view has been influenced by neo-liberal economic perspectives, which argue that the private sector is the main engine of economic growth and perceive Governments as being obtrusive.”[6]

This narrative shift is likely a response to the staggeringly high levels of corruption and criminality by Western and other non-African firms. In a high-profile example, the oil-services company Halliburton was convicted by a Nigerian court for corruption carried out while none other than former U.S. vice president Dick Cheney was at the helm.[7] In a report on “cross-border corruption in Africa” between 1995 and 2014, virtually all cases (99.5 percent) involved non-African firms.[8]

The economic and historical weight of the “weak institutional mechanisms” – from privatization and the disinvestment of state power — is extraordinarily high. For one, budget cuts undermine the ability of states to collect taxes and enforce compliance. As the Tax Justice Network-Africa writes:

[T]he Kenyan Revenue Authority (KRA), employs approximately 3,000 tax and customs officers, to serve a population of 32 million. Meanwhile Nigeria, with its 5,000 tax officials, cannot engage in a meaningful tax dialogue with its 140 million citizens. The Netherlands, as an example of an [Organisation for Economic Co-operation and Development] OECD country, employs 30,000 tax and customs officials for a population of 10 million. … This extraordinary lack of personnel is a product of decades of failed tax policy in Africa, where the role of tax administrations was squeezed as part of austerity programs prescribed by the international finance institutions including the [International Monetary Fund].[9]

Khadija Sharife’s investigative reporting describes the range of tactics built into extraction contracts as incentives to attract foreign direct investment (FDI), from tax dodges to “trade mispricing,” that is, the manipulation of prices to avoid payment of taxes. In Africa’s largest copper producer, Zambia, “[the]  copper industry is largely privatized, previously hosting one of the world’s lowest royalty rates (0.6 per cent) with a corporate tax rate of ‘effectively zero’ according to the World Bank…. Despite Zambia since increasing copper royalty rates to 3 per cent, after missing out on the five-year commodity boom, Zambian [former] president Rupiah Banda has ruled out windfall taxes and generally opposed measures designed to prevent mispricing and other forms of revenue leakages.”[10]

In 2012 Charles Abugre writes in Pambazuka News that approximately 65-70 percent of the upwards of one trillion dollars that have exited the continent in illicit capital flows are due to trade mispricing and other “commercial activities.”[11] The Tax Justice Network-Africa has also noted that structural adjustment-dictated changes to African tax codes have facilitated corporate accumulation, eased tax rates for the export of primary commodities and set favorable tax rates for African elites.[12] As a result, the average tax revenues in African states, at approximately 15 percent of GDP, are significantly lower than in the world’s wealthiest nations (OECD; average 35 percent) and the European Union in particular (39 percent of GDP).[13]

Some multinationals adopt “corporate social responsibility” (CSR) measures enabling them to secure what Padraig Carmody has called a “social license to operate”: a minimum level of consensus to pursue the extraction of profits.[14] “Today most western institutions are preaching the values of good governance and democracy,” the Financial Times describes. “Turning a blind eye to corruption and the abuse of political power is a recipe for political instability.”[15] Yet despite such “best practices,” corporations routinely ignore any obligations, often without repercussions.

The distortions and hypocrisy of Western leaders is stunning with regards to the issue of “corruption.” As Sharife and her co-authors describe in Tax Us If You Can:

Business concerns tend to dominate thinking about corruption. For example, Transparency international’s Corruption Perceptions index (CPI) draws heavily on opinion within the international business community, who first raised the alarm about the perils of corruption. While the CPI provides an invaluable ranking for investors trying to assess country risk, it is of little use to the citizens of oil-rich states such as Chad, Equatorial Guinea or Angola, to know their country ranks low.[16]

“Good governance” regulations are notoriously weak in their enforcement capabilities, and may in fact smooth over any reputational problems for multinational corporations. For example, in 2008, the Ugandan government approved the National Oil and Gas Policy outlining objectives on environmental regulation and investment of revenue derived from extraction. Yet as Jason Hickel points out in 2011 in Foreign Policy in Focus,

the National Oil and Gas Policy is dangerously vague and absolutely toothless. The framework does not bear the authority of law, and includes no mechanisms that would make its proposed regulations mandatory. Even if the framework’s proposals were to end up as actual legislation, it includes nothing that oil companies would not ordinarily promote in their attempts to erect a façade of legitimacy and burnish the image of an industry beleaguered by PR nightmares. In fact, the framework pays far more attention to creating a favorable investment climate for foreign companies than it does to ensuring the welfare of Ugandans…[18]

African neoliberal leaders have also embraced this emphasis. The New Partnership for Africa’s Development (NEPAD’s)  – the African Union’s “development” arm – focuses on “governance” for the implementation of “NEPAD priorities,” to include, among other practices, “handling of misuse of resources” and for “public officials to commit themselves to codes of conduct that negates corruption.”[19] Ironically, some studies have found an inverse relationship between governance measures and FDI.[20] Others have pointed out that there is no consistent relationship between such measures and actual growth. Yet the notion of “African corruption” persists despite the reality of widespread and established practices of illicit activity in the West, and, crucially, the contribution and culpability of Western corporations and governments to ‘African’ corruption. Understanding this reality begins the process of challenging the “corruption” narrative… and its hypocrisy.

Lee Wengraf writes on Africa for the International Socialist Review, Counterpunch, Pambazuka News and AllAfrica.com. Her new book Extracting Profit: Neoliberalism, Imperialism and the New Scramble for Africa will be published by Haymarket later in 2017.

[9] Tax Justice Network-Africa, Tax Us If You Can: Why Africa Should Stand up for Tax Justice, p. 25

[12] Tax Justice Network-Africa, Tax Us If You Can: Why Africa Should Stand up for Tax Justice, p. 41

[16] Tax Justice Network-Africa, Tax Us If You Can: Why Africa Should Stand up for Tax Justice, p. 8