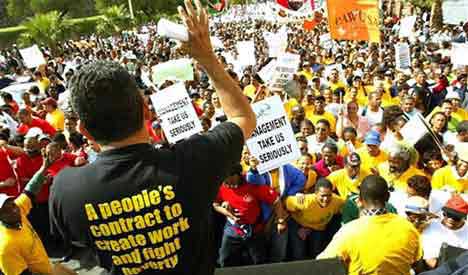 It cannot be said often enough, that overall progress remains too slow and too uneven; that too many Africans remain caught in downward spirals of poverty, insecurity and marginalisation; that too few people benefit from the continent’s growth trend and rising geo-strategic importance; that too much of Africa’s enormous resource wealth remains in the hands of narrow elites and, increasingly, foreign investors, without being turned into tangible benefits for its people

The lamentation above by Kofi Annan appears to succinctly sum up the state of the downtrodden segments of the African people at the present time. More than two thirds of Africans exist on less than $2 a day.  However, there are other Africans who are among the richest people in the world.  Aliko Dangote of Nigeria is richer than everyone in Britain.  Nicky Oppenheimer and Johann Rupert of South Africa are richer than all but two people in Britain.

The question to pose therefore is what is the root cause of the pervasive poverty across Africa? We have a duty to continue to explain that there is a relationship between poverty and politics. Politics creates poverty and poverty is a product of politics. The poor are poor because the rich are rich and the rich are rich because the poor are poor. The process of the enrichment of the rich is, simultaneously, the same process by which the poor are dispossessed by the nature of the economic system and economic decisions, which are taken by the few who wield political power.

To the ruling classes in Africa and their imperialist backers, the root cause of poverty in much of Africa is corruption and lack of ‘good governance.’ Thus, in 1989, the World Bank, declared, ‘underlying the litany of Africa’s development problems is a crisis of governance.’ Nearly a decade later, in the overview of its World Development Report, the World Bank also boldly stated, that, ‘Corruption became endemic. Development faltered, and poverty endured.’ The governance agenda was thus born and corruption was seen as the root cause of the problems of the Global South and, particularly, an inherent problem of the public sector, as, ‘The state’s monopoly on coercion, which gives it the power to intervene effectively in economic activity, also gives it the power to intervene arbitrarily. This power, coupled with access to information not available to the general public, creates opportunities for public officials to promote their own interests at the expense of the general interest.’

The idea that corruption is at the root of Africa’s underdevelopment has also been broadly accepted by leading African economists, as Isaksen asserted, ‘the New Partnership for Africa’s Development (NEPAD) has articulated the importance of accountability, describing corruption, ineffective policies, and waste of resources as major causes of the continent’s stagnation.’

This view continues, as a recent paper on corruption claims that, ‘Hunger, child mortality, illiteracy, and poverty cannot be eradicated as long as corruption continues to sap resources from the world’s poorest countries.’

To the advocates of corruption being the sole independent variable troubling Africa, slavery, colonial history, imperialist conquests and the neo-liberal hegemonic agenda should be forgotten as having any role to play in how Africa has been underdeveloped, exploited, raped and bled.

But the effects of slavery and colonialism in the economic ruin of Africa ought to be adequately understood. Gareth Austin points out that at the beginning of the twentieth century, having been ravaged by the slave trade for several centuries, sub-Saharan Africa was reduced to, ‘an overwhelmingly land-abundant region characterised by shortages of labour and capital, by perhaps surprisingly extensive indigenous market activities and by varying but often low levels of political centralization.’

Then, about 60 years of colonialism resulted in what John Saul and Colin Leys describe as, ‘a continent of household-based agrarian economies with very limited long-distance trade, colonialism imposed cash-crop production for export, and mineral extraction, with manufacturing supposed to come later.’

Sub-Saharan Africa’s economy is more susceptible to the vagaries of world price changes and other external shocks than more diversified economies, because primary production still dominates its exports. Femi Aborisade and Andy Wynne have explained that the dominant economic discourse of the last three decades has been neo-liberalism. According to its advocates, the state is a drain on the value produced by the private sector and so should be scaled back by privatisation, de-regulation and outsourcing. Governments across the Global South, including sub-Saharan Africa have been pressurised to follow this approach. Privatisation usually provides state assets to the private sector at a discount.  Indeed, many state assets tend to be acquired at little or no cost.

Outsourcing and contracting out provide increased opportunities for corruption. According to Transparency International, 20-25 percent of budgets may be lost through corrupt contracting. These estimates are confirmed by the former Vice President of the World Bank for Africa and former Federal Minister of Education in Nigeria, Dr. Oby Ezekwesili, who claimed in August 2012 that, ‘in fact results reveal that as much as 20 percent of the entire capital expenditure will end up in private pockets annually.’

The link between neo-liberal policies and corruption is confirmed by Kühn and Sherman. In the case of Nigeria, they argue in the context of structural adjustment in the mid-1980s that,’corruption as a way of life has become pervasive and popularized in the Nigerian polity, especially in the context of President Ibrahim Babangida’s structural adjustment programme (SAP), where the working people’s real incomes has become so devalued that it is impossible for most salary and wage earners and those on marginal and inelastic incomes to survive on their legitimate earnings. The obsession of many elite members with primitive private accumulation at the expense of the public means that they tend to divert resources earmarked for running and maintaining public institutions in their charge – institutions like hospitals, schools, universities, public utilities, the judiciary, the police and even the armed forces – to corrupt private purposes.’

What the foregoing suggests is that there is a need for the poor and their organizations in Africa to develop alternative explanations to the poverty in Africa and not simplistically accept ruling class explanations and solutions to Africa’s problems.

A Radical Programme for Nigeria

For example, in fighting corruption in Nigeria, the working people and their organizations ought to develop an independent definition of corruption and determine what constitutes corrupt acts and how to fight them, without simply tailing the ruling class agenda. In this context, organized and unorganized segments of the labour movement could unite on the basis of the following demands for practical struggles to collectively change society in the interest of the marginalized and excluded poor:

In the final analysis, workers and the poor should aim at organizing to change society in their interests based on a radical political economic framework, but these measures would be the start of a process that would widen the space for a consistent pro-poor political and economic strategy.

Femi Aborisade is a socialist, writer and lawyer from Nigeria.