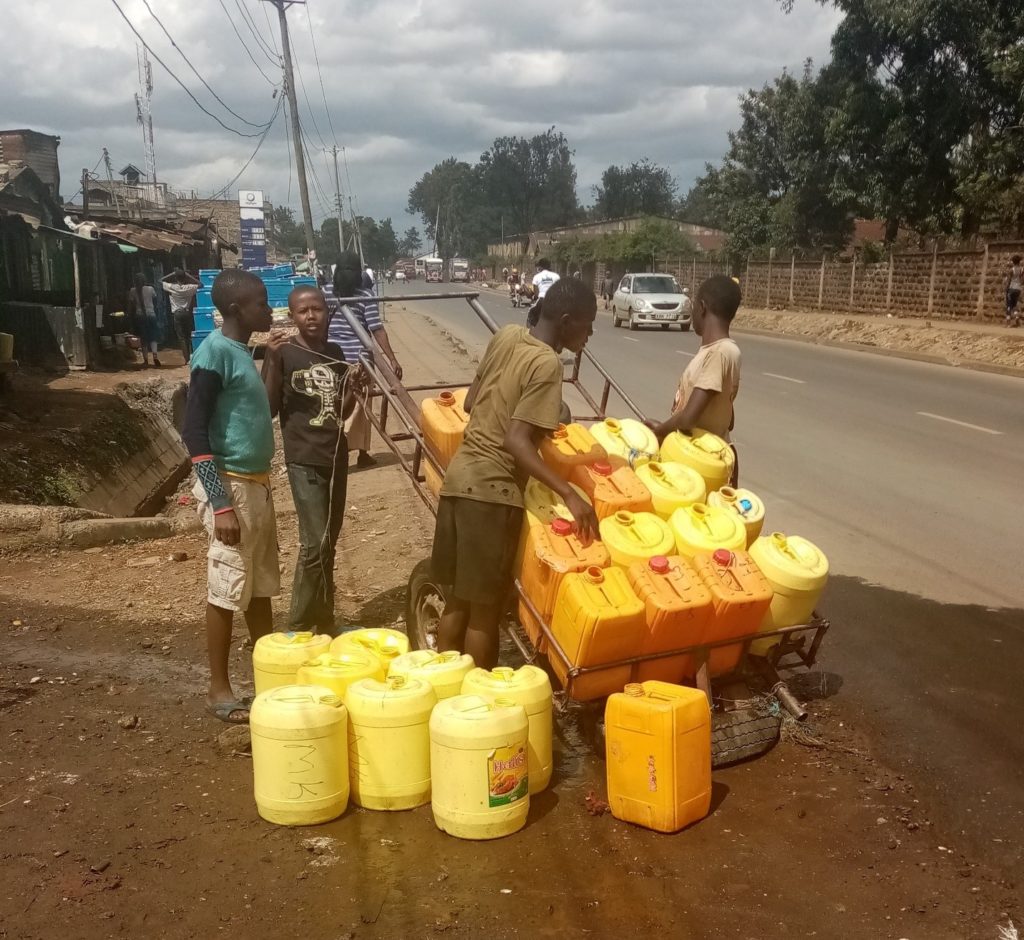 Two reports from Kenya and Nigeria look at the impact of the pandemic in different areas of life. Nyambura Kamau writes how people have been advised to wash hands regularly with running water and soap but even the term ‘running water’ in Mathare – a collection of informal settlements in Nairobi – is a cruel mirage. While Lai Brown reports on the struggles of woman in Nigeria. For many women it is a case of a triple attack – there is the viral offensive in the streets, and hunger and domestic abuse inside homes.

Water scarcity during the Covid-19 pandemic

On 4 March Kenya reported the first Covid-19 case. In order to stop contracting the disease, people have been advised to wash their hands regularly with running water and soap as well as maintaining social distancing.  But the term ‘running water’ in Mathare – a collection of informal settlements in Nairobi – is a mirage.

There has been an inadequate water supply in the area for years, and water is only available three times a week in most wards. However, even this is not always the case. Sometimes the water available is contaminated and not fit for human consumption. In recent weeks the price of water has hiked from the normal five Kenya shillings per 20 litre jerry can to 10-20 shillings.

Since the post-election violence in the country twelve years ago, the water service provider cut the supply in almost all the wards in Mathare area. So now the main source of water is private suppliers in most wards, with water vendors and cartels involved in supplying water. While the plot owners who have water-meters are required to pay a standing fee of 407 Kenya shillings per month.

Not only is there inadequate water supply but the water is frequently contaminated. According to a research Maji ni Haki, Maji ni Uhai (‘water is life, water is a right’) carried out by Mathare Social Justice Centre (MSJC) in 2018, the water was found to be polluted by the bacteria Escherichia coli known as E Coli. Well known to cause bacterial infections like diarrhoea, fever and many more – often fatal infections in poor communities.

Most of Mathare’s residents work as casual laborers in Eastleigh, which has been a hotspot of Covid-19 in Nairobi. Therefore, running water is an absolute necessity to wash your hands –  before, during and after work in Eastleigh.

Yet, residents of Kosovo and Huruma, areas of Mathare, for example, have recently experienced respectively four and 13 days with no water. This is an enormous concern and needs urgent attention.

‘I have to walk to Ruaraka Constituency to fetch water’ says Salim, a resident of Kosovo. While, according to Alex, a worker at a car wash in Kosovo, they sometimes fetch water from Nairobi River to wash the cars. Elizabeth, a resident of Huruma, explains, ‘I have to walk to Kiamaiko or any other place to fetch water and carry it myself because relying on the water vendors is double the price that I do not have.’ In Huruma there has been a lack of water for at least two weeks.

Various government officials and well-wishers have donated tanks and soap, though woefully inadequate this has become essential during the crisis. Lack of water has been so rampant in Bondeni for example, that an emergency borehole is being drilled.

Most families in Mathare are unable to implement the new measures for the prevention of Covid-19 as thousands have lost their work and have no money to buy water, food or any other essentials, and social distancing sounds like an unkind joke in a high density settlement.

At the Social Justice Centre, we argue and campaign for the right to a clean and adequate supply of water.

Nyambura Kamau is an activist in the Water and Sanitation Campaign run by the Mathare Social Justice Centre.

There is rise in domestic violence on women and children in the last three months across the world in the wake of the Covid-19 lockdown measures that forces people to be together for longer hours, in stressful circumstances and with partners who are already aggressive or in other ways difficult to be with in even normal times.

The sad reality is that the cases of gender-based violence in Africa, particularly in my home country Nigeria, are likely to continue rising as Covid-19 spreads and the broader crisis in society continues.

The health crisis coupled with the severe crisis of an underdeveloped economy creates the conditions that increase vulnerability to domestic violence. This is particularly true in Nigeria, where decades of socio-economic crises have had a devastating impact on many working families and have widened social inequality across society. The government has moved to declare a widespread lockdown of society and economy without commensurate social supports such as providing foods, drugs, accommodation, and water .

After a few weeks in lockdown we saw a rise of gang violence with woman frequently being targeted. There are reports of women raped in their houses and female food vendors robbed in broad daylight.

In Osun State, in the southwest region of Nigeria, a woman was physically assaulted by policemen. Halima Abdul-Aziz was stopped on her way to get medical help for her ailing daughter. She was beaten by police officers who refused to listen to her reasons or bother to take her to the court; rather, they took the law into their own hands. In a press statement Abdul-Aziz demanded justice and explained that the violence she experience was an attack on all Nigeria women.

A similar tragic attack on a woman happened in River States, in the south of the country. On 23 April, a policeman killed a female colleague during the enforcement of the restriction of movement order. The slain policewoman was trying to prevent the task-force team from destroying the properties and goods of female traders. Roape.net readers should note that 80 percent of the traders are women and food vendors are among the ‘essential workers’ allowed to be out despite the restrictions on movement. Still, the conflict escalated and a woman who struggled for the lawful and fair treatment of women died.

The situation in Nigeria is remarkably and horribly similar in South Africa. The South Africa government’s gender-based violence and femicide command centre recorded over 120,000 calls from abused women and children within the first three weeks of lockdown, and these are only the number of woman able to make a call.

Patriarchal oppression and gender-based violence is a cause for social concern worldwide and increasing domestic violence can be observed across the globe during the pandemic. It was reported that in the Philippines, clerics and religious leaders claimed that genderqueer and LGBTQIA+ are responsible for the coronavirus pandemic. Such absurd claims are repeated on social media where the pandemic is frequently regarded as ‘God’s way’ of punishing us for the sin of sexual deviance. Those kinds of narratives are not just incorrect and illogical but also dangerous as they reinforce gender oppression and violence against women. Similarly, in United Kingdom in the first three weeks of the lockdown in March there were 16 domestic abuse murders, a figure far higher than usual.

In addition, as the SARS-CoV-2 virus chases the poor out of the street, in Africa and elsewhere, the hunger ‘virus’ attacks indoors. But for many women, particularly poor working-class women, it is a case of a triple attack –  there is the viral offensive outside, and then hunger and domestic abuse inside their homes. Away from the homes, women make over 60 percent of the health workers on the front line of the fight against the pandemic in Nigeria.

For more than three decades the country has experience massive neoliberal restructuring which has impacted public health, with women health workers forced to confront these punishing and savage ‘reforms’. There is little in the way of a public health system in the country, and millions suffer as a consequence. What exists has been bled dry, with nurses in Enugu State University Teaching Hospital in April forced to protest due to the lack of personal protective equipment (PPE).

In summary, the Covid-19 crisis escalates our oppressive sexist culture in all its forms and contents. The spike in violence on women and domestic abuse in the context of the ravaging health crisis calls for conscious and collective actions to combat not only the coronavirus pandemic but also the ‘social pandemic’ of gender-based violence.

Collective action is needed to combat the health pandemic, and gender-based violence across the country. In Nigeria, we should insist that all victims of gender-based violence should be isolated from their aggressors and be resettled in secured and comfortable accommodation. The workers and caregivers on the front-line of the battle against Covid-19, who are largely women, must be provided with PPE against contracting the virus. The state must also ensure that caregivers are provided with free childcare during the period they are at work.

Lastly, we, as poor working-class people, must redouble our struggles for a society built on social solidarity. We have to take a stand against domestic violence in our communities and protect those who are vulnerable. As we fight these multiple pandemics, we must organize to build a new society built on democracy from below and equality, which will provide the objective conditions to put an end to all forms of oppression.

Feature Photograph: Children fetching water in Mathare. Water scarcity has been a norm in the informal settlements of Nairobi during the pandemic (Nyambura Kamau).