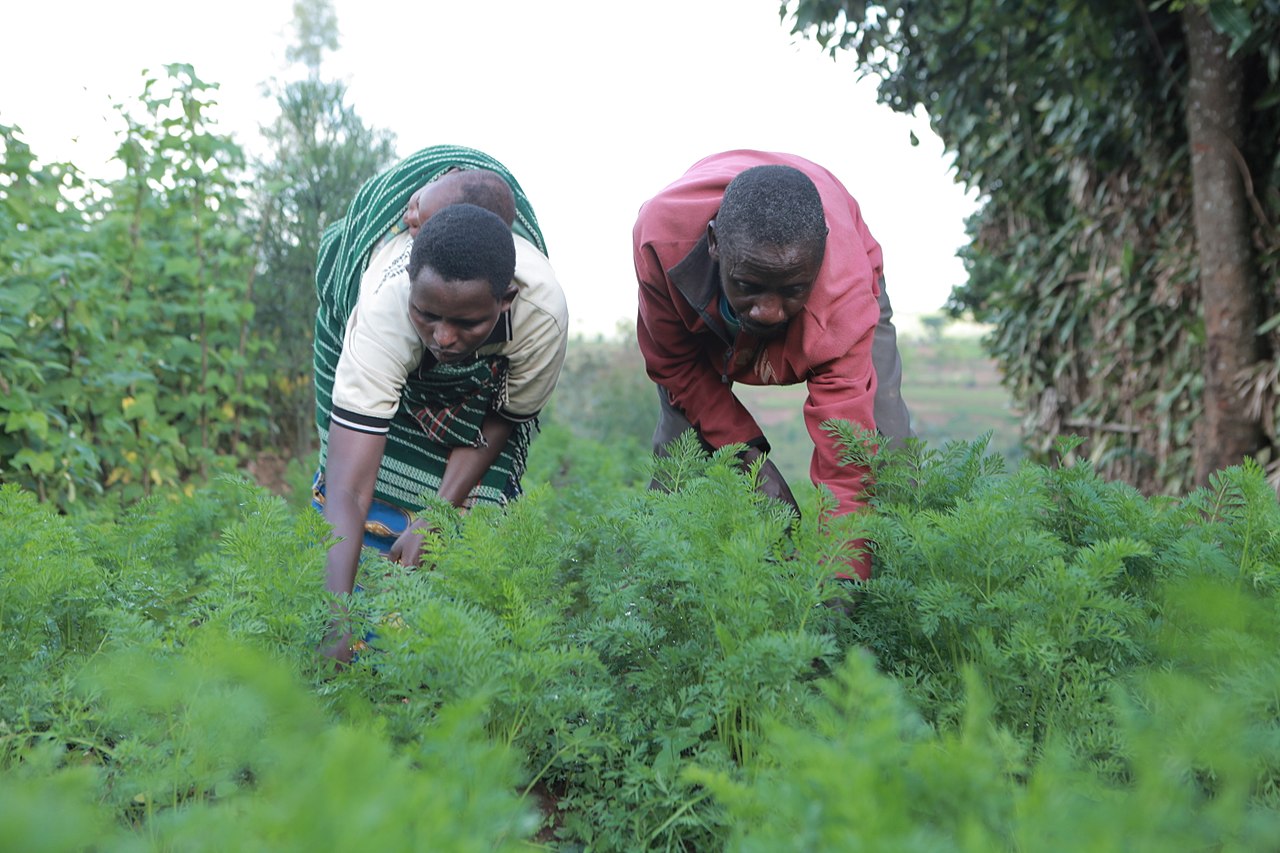 At the opening of the 15th National Leadership Retreat, president Kagame asked national leaders why Rwanda is among the worst performers in terms of child malnutrition. A recent report – still publicly unavailable – of the National Institute of Statistics found a child malnutrition rate of 38 percent. This figure seems a weird anomaly in a country that is lauded for its ‘developmental success.’ Average yearly growth rates around 7.2 percent are among the top 10 globally. The country ranks 41st on the World Bank Doing Business Report,  and is applauded as one of the world’s most performing business reformers. At the continental level, the country is praised for the implementation of a Green Revolution and named top performer in the transformation of the agricultural sector.

However, in the past couple of years, critical voices have questioned the Rwandan development model, and particularly the Green Revolution’s beneficial effects. Some highlight the contradictions between different agricultural productivity data. They question the legitimacy of using productivity figures as a proof of agrarian reform successes.[1] Others call into question the long-term sustainability of the agricultural and land sector reform in terms of poverty reduction,[2] and point to the increasing poverty rates over the past couple of years (2010/11-2013/14). [For the on-going debate on Rwandan poverty figures on roape.net see our blogposts here and here.] Also, from within the system, there is recognition about the decrease in citizen’s satisfaction with agrarian and land policies.[3] The government presents itself as an organisation that can learn, and there is indeed increased openness to discuss on problematic policy aspects.

However, deeply embedded systemic problems within the ongoing rural transformation process remain unaddressed. These systemic problems can be linked to two features of the current model. The first is that it is implemented through a rigid top-down authoritarian system, and secondly, it is blindly obsessed with reaching performance targets. The way in which Rwandan leaders’ frame the problem of malnutrition, illustrate the lack of a broader critical reflection.

Child malnutrition is – first of all – explained as a result of farmers’ ignorance on children’s nutritional needs (from interviews conducted in January 2018). Government agents explained how ‘they [farmers] do not understand the importance of a diverse food diet’; how malnutrition is a ‘problem of farmers’ mindset.’ One interviewee also highlighted the problem of gender, referring to the male household heads consuming their family’s income for their own amusement in bars (‘they transform money into beer instead of food for their kids’). The Rwandan government’s focus on the necessity for intensified awareness and sensitisation campaigns frames the problem as a matter of making farmers ‘responsible’.

Such framing ignores the deeply problematic systemic flaws within the top-down imposed agrarian model. The set-up of the agrarian modernisation policy focuses on modern production techniques but ignores the local know-how of farmers. The Green Revolution policy package focuses on regional specialisation and increased marketization of agricultural production. This is done is four main ways. Firstly, through land consolidation and crop intensification programmes, farmers are pushed into imposed crop production schemes. They are obliged to buy predefined seeds and fertilisers (even if partly subsidised). They are then obliged to cultivate and harvest according to pre-imposed schemes. Secondly, intermediary traders can easily exploit farmers’ dependency. Cooperatives structures are not a panacea to this problem. In fact, cooperative management structures rarely involve bottom-up accountability. Thirdly, farmers – in turn – have become dependent upon a monetarised economy, whose logics clashes with the farmers’ daily struggle for survival. Most farmers do not have a financial buffer to wait for money until the end of the season. Moreover, cooperatives often take time to process harvests. Waiting for payment for crops that were harvested weeks or months before, puts farmers under severe stress. Finally, there is high food price inflation, particularly for food crops that are not locally produced. Limited market integration gives enhanced bargaining power to intermediary traders and contributes to the emergence of price anomalies. Unpredictable price fluctuations and high inflation profoundly affect farmers’ purchasing power. Government interventions to correct food price distortions often take time and are not always efficient. Taken together, these processes have a perverse impact upon farmers’ capacity to feed their families, or to diversify their diet.

Moreover, there are sincere concerns around the ecological sustainability of the Green Revolution model. Attentive observers might have noticed an increasingly present phenomenon in the Rwandan countryside: non-cultivated areas of arable land. Several reasons explain this worrying trend. Firstly, in our interviews, farmers explained how the price of the imposed seeds and fertilisers are often higher than the potential return, particularly since the subsidies have decreased. As they are not allowed to produce other crops or use their own seeds, they sometimes opt for leaving land fallow. Secondly, in several zones, the composition of soils has changed due to over-intensive or badly applied use of chemical fertiliser. Farmers refer to ‘soils having become addictive to chemical fertilisers.’ When the price of chemical fertiliser goes up and farmers are no longer able to afford them, harvest rates may significantly decline. The same may happen due to soil quality depletion as a result of consistent abuse of chemical fertilisers over several years. As a result, farmers leave land fallow.

A additional argument – brought up in relation to the malnutrition discussion – is the problem of fake reporting by local leaders, blurring the true image of local realities. At the National Leadership Summit, several speakers mentioned the problem of falsified performance statistics, rendering efficient policy planning impossible. Several of our informants highlight the ‘auto-critical nature’ of the summit, with ‘ministers under fire’ as a result of the malnutrition rate, and local leaders treated as ‘liars and even traitors’. The prime minister highlighted how ‘there is still a bad habit of falsifying statistics when they [local leaders] are working on their reports. That compromises our planning because we cannot know how the country is doing when they give us unrealistic statistics’.

However, an argument around the importance of local leaders’ responsibility ignores the systemic flaws in the administrative way of functioning. Several authors have analysed how decentralization in Rwanda has reinforced the power of the centre, while inserting ‘tightly monitored, technocratic and depoliticised local governments’[4] into a logic of imihigo performance contracts (imihigo is a Kinyarwanda word meaning to vow to deliver). [5] Whereas this has resulted in a highly responsive administrative system, there is limited space for bottom-up input in decision making.[6] Local leaders’ positions depend upon their capacity to prove results in reaching pre-imposed quantitative targets, not upon their capacity to critically assess the suitability of those targets and adapt them to local level realities. The yearly evaluation assessments and ceremonies further increase the pressure upon local administrators. As a result, there is frequent cheating in their quantitative reporting.

In fact, local leaders urged to perform in line with national development targets can even result in actions that impede development. A clear illustration is the phenomenon of unused radical terraces. Over the past five years, land terracing has been a major priority in VUP (Vision 2020 Umurenge) programmes. Many District Development Plans include specific targets in terms of hectares to be terraced. However, the pressure to perform has led to aberrations. So, the zones destined for terracing are designated by local administrators. The vulnerability of local farmers – at least temporarily losing access to their land – is rarely taken into account. Furthermore, in several zones, terracing was badly done. In certain cases, the top soil layer was mixed with deeper layers, which severely reduces the agrarian potential of the soil. In other cases, terracing was not accompanied with re-fertilisation measures in absence of organic material. In certain zones we even saw radical terraces covered with eucalyptus trees. What is more, the involvement of the Rwandan Reserve Force in the most recent terracing programmes may be an opportunity but is also a challenge (the RRF is comprised of Rwandan nationals serving in a quasi-military arm of the Rwandan Defence Forces). Several of our interviewees pointed to the speed with which demobilised soldiers deliver results. However, some pointed to the problematic lack of know-how within the militarily organised structures coordinating this process, and the limited margin for input from agrarian specialists and a complete ignorance of local farmers’ know-how in sustainable soil protection. Lastly, in January 2018, we gathered several accounts of empty terraces being offered to anyone willing to invest in agricultural production for very cheap prices, and regardless of existing land rights. The phenomenon of Lost Land testifies of systemic mistakes within a rigid top-down authoritarian administrative order in which local leaders blindly run after predefined targets.

A final issue of concern is the position of international donors. Many of the projects executed under the Green Revolution programme have been funded by major international donors, such as the World Bank, the European Union, International Fund for Agricultural Development (IFAD) and the Department for International Development (DFID) in the United Kingdom. Donors appreciate the Rwandan policy makers’ capacity to deliver results in line with clearly defined targets. However, very little reflection is carried out around whether this target-orientedness adds up to a socially and ecologically sustainable development method.

Farmers see themselves being considered as ‘rats in a laboratory’ on whom a variety of policy measures are tested. The levels of frustration are increasing. The lack of space for discussion on systemic problems risks undermining Rwanda’s economic, social and ecological future.

An Ansoms is a long-standing ROAPE contributor. She has a PhD in Applied Economics and is a Professor in development studies at the Université Catholique de Louvain, Belgium. Her focus is on natural resource conflicts and challenges for rural development in the Great Lakes Region of Africa.

[4] See Chemouni, B. (2014) ‘Explaining the design of the Rwandan decentralization: elite vulnerability and the territorial repartition of power’, Journal of Eastern African Studies 8 (2): 246-262 (citation from p. 246).