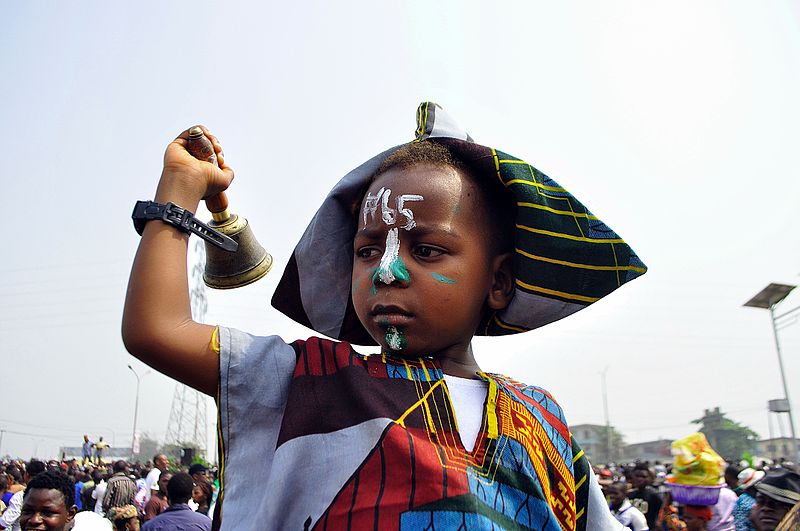 Nigeria is the largest economy in Africa and around one in five Africans are Nigerian. Despite the oil wealth, most of the people are extremely poor, with around 60% of the population having to exist on a dollar a day or less. This level of poverty and inequality creates a high degree of anger and many Nigerians are searching for alternatives.

Some have turned to nationalism, as with the case of Biafra or ethnic clashes between the Fulani cattle herders and local farmers in the central belt. Others look to religion, for example, the born-again Christian churches, the Shiite supporters of the Islamic Movement in Nigeria or, in the far north east, Boko Haram.

But Marxism is deep within the Nigerian labour movement. The Labour movement unites Northerners and Southerners; Muslim, Christian and traditional workers.  When this movement is aroused the whole country stops – as last happened in January 2012.  This involves the organised workers, predominantly in the public sector, but also much wider layers of the urban masses: the informal workers, area boys and market mamas. Adam Mayer’s Naija Marxisms – many Nigerians refer to their country as ‘Naija’ – provides a comprehensive historical introduction to the ideas that guide such movements.

The first part of Naija Marxisms provides a potted history of the left and the trade union movement in Nigeria. It considers a range of socialist and Marxist writers that developed within this movement. Since at least the mid 1940s, Marxism has been an important current in the fight against colonialism, within the trade unions, the feminist and the student movements.

In the first half of the 20th century, the Nigerian economy was dominated by European firms and the colonial government.  As such the anti-colonial movement was against both colonialism and the main employers of formal labour.  In contrast now, although international firms are still important (especially in the key oil sector), the main employers are the governments (Federal and state) and indigenous companies (the larger ones of which have developed a regional or continental reach).

Mayer describes how, as part of the post-second world war radicalism, the first general strike took place in 1945 and the mass nationalist Zikist Movement started the following year. Zikism relied heavily on trade union leaders. Its field secretary, Nduka Eze went on to lead a major strike at UAC (then the largest European owned company). The first leader of the trade union movement, Michael Imoudou, was also a member of the Movement.

Four years after independence, in 1960, there was another general strike against preventive detention. In the 1970s further restrictions were introduced on trade union activities and in 1978, the military government merged the trade unions to form the Nigeria Labour Congress (NLC) – which remains the largest trade union centre.

Muhammadu Buhari, the current president of Nigeria, then the military leader introduced anti-labour decrees in the early 1980s.  This was followed by the Structural Adjustment programme of the mid-1980s with deindustrialisation, wage cuts and attempts to reduce the fuel subsidy. There were fight backs with the 1981 strike for a minimum wage and a pro-democracy general strike in 1994.  The strike wave continued and expanded after the end of military rule in 1999.

Student protests grew with the extension of university education in the 1960s. By the 1970s student action was considered as significant as the trade union movement.  These developments gave birth to a layer of Marxist intellectuals including Ola Oni, Eskor Toyo and Eddie Madunagu.

In addition, to providing this historical overview, the book includes a chapter on international relations and the Nigerian left.  Mayer explains that whilst the elite of the country clearly looked to the US, socialists looked to other African radicals such as Amilcar Cabral  (of Guinea Bissau and Cape Verde) or Joe Slovo (South Africa) or to figures such as Angela Davis.

Russia provided arms to the Federal Government during the Biafran war (1967-1970), some aid for capital projects, for example, the Ajaokuta Steel Mill and supported many students studying in Russia and Eastern Europe.  Despite this, the Nigerian government turned its back on the East after the civil war and in 1976 three leading trade unionists were indicted for “acting in the interests of a foreign power.”

Despite some criticism of the Soviet Union, many Nigerian socialists lost an important financial and ideological external backer with the collapse of ‘communism’ from 1989. However at least two small Marxist groups, the Democratic Socialist Movement (established in 1987) and the Socialist Workers League (from the 1990s) continue to provide organisational homes for many Marxists in Nigeria.

In the central chapters of his book, Mayer considers the background ideas and key publications of many key Nigerian socialists. Authors covering a wide range of views are included and the reader is left to distinguish between those who were largely uncritical of the Soviet Union, some who were fundamentally nationalists and others of the classical school who clearly support socialism from below. In the chapter on activists and intellectuals Mayer considers a number of important Marxist activists and thinkers. It is worth introducing some of them to roape.net readers.

Niyi Oniororo who  died in 2005, was Ola Oni’s brother mentioned above, but much more favourably inclined to the so-called socialist states.  He quoted George Bernard Shaw on taxing the rich and criticised other socialists from the late 1970s for their search for money.

Mokwugo Okoye, who died in 1998, was the Secretary General of the Zikist Movement and waxed lyrical about the student revolt in Africa and beyond and was a broadcaster. He was one of the few Nigerian socialists who argued strongly against faith as being a “firm belief in something for which there is no evidence – is, historically, a harmful quality since it invariably leads to fanaticism, narrow-mindedness and cruelty.”

Eskor Toyo who died as the book was being completed in 2015 was educated in Poland and was a professor of economics at the University of Calabar.  He wrote a critique of dependency theory (developed by Samir Amin and others) in the early 1980s as being based on contradictions between national economies rather than classes.  He was critical of Eastern Europe and supported Trotsky and Mao, he called for support of the Peoples’ Redemption Party (PRP).

Eddie Madunagu is a Trotskyist and was a mathematics professor at the University of Calabar.  His wife Bene was also an academic and is a well known feminist. Eddie was a columnist for the Guardian, a Nigerian daily paper, for many years. He established a public library and an NGO to educate boys on feminism.

In a chapter devoted to political economists Mayer considers, amongst others, Bade Onimode – who died in 2001 –  who continued to talk about neo-colonialism being the main enemy despite the growth of a class of rich Nigerians with the indigenisation decrees of 1972 and 1976 and the privatisation of the 1980s. Bade advocated structural disengagement from the global economy to ensure the development of the local economy. His 1990s works talk much less of socialism, but he remained a Marxist.

The final main chapter of the book considers feminist ideas.  In many parts of Nigeria pre-colonial oppression of women had been less onerous than it was to become.  This was shown most clearly with the women’s war of 1929-30 in south eastern Nigeria.  Women rose-up against the misguided reforms of the colonialists and the missionaries and the removal of the influential roles for women in their pre-colonial societies. Fifty-eight women died before this revolt was ‘pacified’, although they did gain some important improvements.  Mayer writes about radical Marxist inspired feminism. Two of the key early figures of Nigerian Marxist feminism were Olufunmilayo Ransome-Kuti from the south west and Gambo Sawaba from the North. Ransome-Kuti came from an elite family, but joined the fight for market and other women. She formed the Abeokuta Women’s Union with 20,000 members to fight against taxation and for decolonialism and universal franchise (northern women only gained the vote in 1977). Sawaba was jailed 17 times and charged with prostitution in a show trial where she was banned from Kano. She was an early member of the Northern Elements Progressive Union (NEPU) in Zaria and managed to meet-up with Ransome-Kuti.

Current prominent socialist feminists today include Bene Madunagu, Molara Ogundipe (both of Women in Nigeria), Amina Mama.  The main trade union centre, the NLC, developed its gender equality policy in 2003 and has continued to develop this area of its activities.

Naija Marxisms describes how Nigerian Marxist theory developed in the second half of the 20th century and still “provides intellectual ammunition” for the labour movement. Broadly speaking, it considers Nigeria to be a capitalist country, embedded in a global capitalist economy, but affected by traditional feudal structures.  As Mayer writes, “Nigerian Marxism has been a coherent intellectual movement that provided important answers to the existential questions troubling Nigeria and West Africa, from the late 1940s up to now.”

With its direct links to the NLC, and the organised working-class, Marxism remains a key force in modern Nigeria.  There have been major strikes, for example, in most of the states since the fall of the oil price in 2015. The Marxist inspired labour movement, with its long history, explains some of this militancy.  ‘Naija Marxisms’ are buttressed by anti-imperialism, feminism and the anti-feudal northern peasantry.  It retains an organised form with a number of Marxist groups still inspired and informed by a sophisticated tradition of home-grown internationalist Marxism.. Adam Mayer’s book provides a comprehensive and accessible introduction to this important school of thought for socialists in Nigeria, West Africa and beyond.