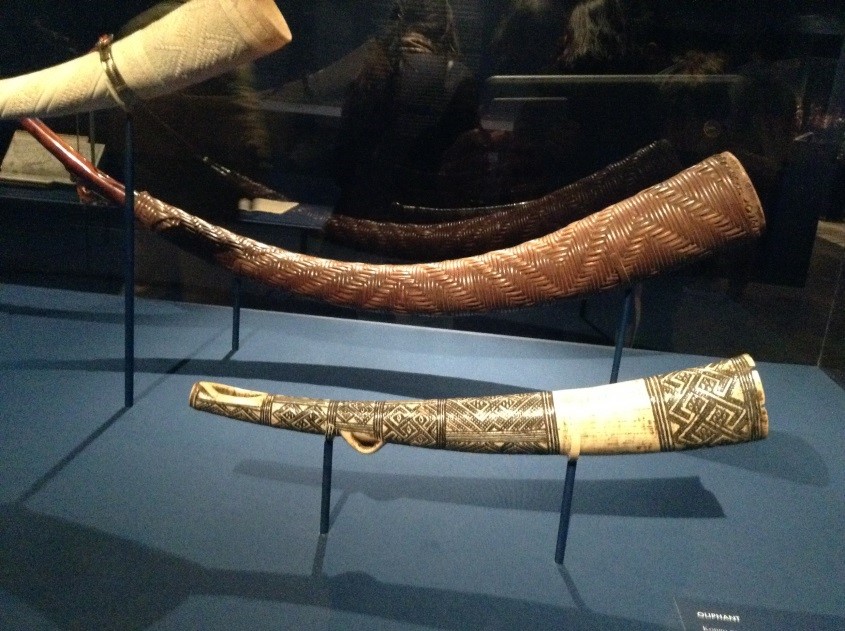 The Metropolitan Museum of Art in Manhattan held an exhibition entitled, Kongo: Power and Majesty (September 18, 2015 – January 3, 2016). The first gallery showed a selection of exquisite oliphants or trumpets, fine ivories expertly sculpted from elephant tusks in the sixteenth century.

Portuguese traders and missionaries acquired these masterpieces and brought them back to Europe. Two found their way into the Medici collection, inventoried in 1553 as ‘two ivory horns with engraved motifs.’

These sophisticated and sublimely beautiful oliphants are artifacts of a remarkable civilization that was wealthy and stable enough to be capable of producing subtle, intricate and inventive artistry. European explorers saw something else. The exhibition label noted that ‘non-European objects were of interest primarily for their marvelous materials and as evidence of manufacturing skills.’ Why were the Africans who created these instruments not honored as contemporaries of Michelangelo? Why didn’t Europeans regard the Kongo civilization as comparable to the Renaissance? Why did they reduce Africans to raw human labour?

Having just finished writing a book, Gender and the political economy of conflict in Africa: the persistence of violence, in which I traced the history of domestic slavery in eastern Congo, the details of the Portuguese transatlantic slave trade were uppermost in my mind. As early as 1650 the Kingdom of Kongo and the territory of Angola were the epicenter of the slave trade, and sculptors commemorated the cataclysmic events in extraordinary narrative oliphants. The exhibition commentary reads: ‘The pain and suffering inflicted on Kongo communities is inscribed in detail within the spiraling bands of ivory tusks carved for export in Loango. They depict columns of subjugated slaves and forced laborers, chained to one another, headed to toil in the New World or to exploit local resources for European profit.’

In Gallery Four a dozen vitrines contained striking wood carvings from the late nineteenth and early twentieth centuries that depict a mother squatting with an infant laid across her lap. The exhibition note attributed the large numbers of these figures to Kongo female power, to the reverence of a woman’s potential to act as a vessel for life. This explanation strikes me as an example of what psychologists call transference – the projection of one’s beliefs onto another.

Everything that I have read about domestic slavery and the status of women in colonial Congo suggests that, although high rates of childbirth were desired by slave owners and by Belgian colonists, women’s status declined steadily.  The systematic restriction of women’s activities, limiting them to farming and childbearing/child rearing; the denial of meaningful education to girls; the reinforcement of elder men’s hold on women at every turn of the industrial wheel, as more men were wanted for colonial commercial and infrastructure projects, private as well as public; the suppression of matrilineal societies and the tampering with customary laws that gave women some rights to divorce and inheritance; the blocking of any possibility of women becoming proletarians, of earning wages for their labor, of entering the modern economy on the same terms as African men – if all this is placed on top of the legacy of the slave trade, domestic slavery and pawnship, the downward trajectory of women’s status in Congolese society is unmistakable.

Searching for another interpretation, I remembered that Jesuits swiftly followed Portuguese explorers; King Nzinga a Nkuwu was baptized on 3 May 1491 and took the name João I.  Renderings of mother and infant are rare outside of areas influenced by Christianity. The image has been familiarized by the spread of the cult of the Virgin Mary, but it is scarce in prehistoric and ancient art. There is no lack of portrayals of women – fertility symbols, goddesses and queens abound in the art of many early civilizations. The dyad of mother-and-baby is all but absent, however, raising questions about high rates of infant mortality in those societies.

In this last gallery powerful Mangaaka (nkisi n’kondi) from the mid-nineteenth century were on display. For many visitors, these large composite figures of wood, metal, raffia and other materials are iconic African objects (along with masks). Africans credited the nkisi with providing aid to petitioners and destruction to their opponents – essential weapons in the losing struggle against slavery and colonialism. The crudeness of these carvings, while adding to their power, contrasts sharply with the delicacy of the oliphants. Still meditating on the slave trade, which severely disrupted and reshaped African societies for a millennium, I wondered about the deskilling of societies, of regression to the provision of basic necessities requiring everyone’s labor, and of the inability of reduced communities to nurture and support dedicated artists.

We know that slavery and the slave trades — across the Sahara, over the Atlantic Ocean and beyond the Indian Ocean — changed everyone in Africa: they affected kinship and community across generations, social relations of gender and work, sex and status, procreation and demography, hierarchy and stratification. And as surely, slavery also changed artistic production.