Drawing on material from his new book, Pedro Monaville discusses the radical politics and activism of Congolese students in the 1960s. He argues that despite their small numbers, their political influence was significant. While memories from this period might be fading, they can still help us to better understand what was lost, and remain a key component in the history of the present.

At the center of Students of the World: Global 1968 and Decolonization in the Congo is an historical engagement with Congolese who studied at universities in Kinshasa, Lubumbashi, Kisangani, and various foreign institutions in Europe and North America from the late 1950s to the early 1970s. This was a relatively small group of people (a few hundred by the time of independence in 1960; around 15,000 a decade later), in great part because Belgian colonialism had built a Malthusian educational system that made it very difficult for young Congolese boys to continue their education beyond a few years of primary schooling, while it was virtually impossible for girls. Despite these relatively small numbers, the students’ political influence was determinant. Students represented the nation’s future and the promises of sovereignty and accelerated development that came with independence.

As they moved increasingly towards the left through the 1960s – a trajectory that my book follows carefully – they were able to use the prestige and dispositions connected to their elite status at the service of radical political projects. The organization they created in 1961, the General Union of Congolese Students (UGEC), emerged as one of the strongest constituents of the Congolese nationalist camp and it played a prominent role in national politics. UGEC activists claimed Lumumba’s mantle and pressured politicians to restore national unity and continue the struggle for real independence, including economically and culturally. UGEC regularly organized street protests and published manifestos, but it also collaborated with the state when it perceived productive openings.

By contrast, other students radically rejected the legitimacy of the post-Lumumba administrations and they joined the Mulele and Simba insurgencies of the mid-1960s, which captured a third of the national territory in an attempt to bring along a second independence to the Congo and fulfill Lumumba’s dreams of total emancipation. These students served as cadres on the front in the Kwilu and Eastern Congo, as well as ideologues and special envoys of the movement in exile. Doing so, they created multiple connections between the Congolese revolution and other anti-imperialist struggles throughout the world.  The contrast with the current situation is staggering. Today, Congolese universities officially enroll more than 400,000 students according to governmental sources, but the collective political capacity of the students is much diminished.

Laurent-Désiré Kabila, the third President of the DR Congo from 1997 until his assassination in January 2001, was a true veteran of the anticolonial and anti-imperialist struggles of the early 1960s, as a major operative of the Simba rebellion of 1964 and 1965 in which some students of the time had played a critical role. Unlike other rebel leaders, Kabila always refused Mobutu’s offers of amnesty and he maintained a small rebel base for years in the region of Lake Tanganyika.

When he finally chased Mobutu from power in 1996, as the leader of a rebel group sponsored by Rwanda and Uganda, and with his son Joseph as a general in the rebel army, Kabila called many former revolutionaries of the 1960s to his side. Several ministers in his governments and a great number of advisors had started their political lives as members of the student movement during the first decade of independence – including many who had been forced into exile by Mobutu’s repression of student politics and who had lived abroad for several decades.

A number of the old Kabila’s fellow revolutionaries lost their access to power after his assassination. Joseph was the youngest head of the state in the world when he succeeded his father. Later in Joseph’s presidency, when the United States and other western countries were eager to see him go, he made abundant use of an anti-imperialist rhetoric. But in his own struggle for survival, he did not seem invested in projecting any kind of ideological coherence. In 2004, he addressed the Belgian senate with a speech that praised Leopold II and the Belgian “pioneers” who had collaborated with the monarch to establish the Congo Free State.

As I mention in the preface to my book, when I began my research, several of my interlocutors, who had been part of the old Kabila’s circles of power as longtime participants in the Congolese left, hoped that Joseph would pull himself together and more strictly espouse his father’s political line. They were particularly invested in my research on the history of the student movement and of the 1960s left because it was the foundation of their political imagination as well as the main source of their legitimacy as political actors.

Memories of the 1960s haunted the present in yet other ways during my several years of research on the history of Congolese student politics, particularly from 2006 to 2013, when I was writing the doctoral dissertation on which my book is based. As a militant opposition to Joseph Kabila’s rule developed after his disputed victory against Jean-Pierre Bemba at the 2006 presidential elections, rumors and conspiracies about his origins and supposedly dubious claims to Congolese nationality spread with much vigor in the Congo and among the Congolese diaspora. The rumors claimed that his real name was Hyppolite Kanambe, that he was not Laurent-Désiré Kabila’s son, and that his real father was one of the several Rwandese Tutsi rebels who fought together with the old Kabila in the maquis of Eastern Congo in the 1960s. Accordingly, both attempts to prove and disprove the rumors involved the circulation of photographs, short video clips and oral testimonies from this period of Congolese history.

By the late 2000s, many positions of power were still occupied by people who had first accessed responsibilities in the 1960s as they freshly graduated from universities. In more recent years, there has been a visible renewal of the ruling class. Transformations have also taken place at the center of power. In January 2015, popular protests thwarted plans to pass a constitutional amendment that would have allowed President Joseph Kabila to run for a third mandate – and students this time played a leading role. When the elections were held on December 18, 2018, Kabila’s candidate Emmanuel Shadary was defeated. Yet many irregularities were reported, and the presidency went, after what appeared as a secret power-sharing agreement, to Félix Tshisekedi, a former opponent of Kabila.

While civil liberties somewhat increased in the aftermath of Tshisekedi’s access to power, and while his first government abolished the payment of fees in public primary schools, not much has improved for the Congolese population in terms of livelihoods, food security, and access to health care, water and electricity. As is well known, the new administration has also been unable to bring back peace and stability in eastern Congo, where the Rwandese government’s recent renewed support to the M23 rebel group further aggravated a conflict that had never fully receded.

Despite the many continuities in the hardships that the Congolese people face, Tshisekedi’s access to the presidency marked a turning point in Congolese postcolonial politics. For all of the frauds that may have tainted the electoral process in 2018, his election was the first peaceful transfer of power since independence. Kabila might well make a come-back in the near future, but his retreat in January 2019 symbolically turned the page of a long sequence in Congolese politics that had started in the 1960s.

Félix Tshisekedi is also the son of a figure that played a major role in the tragedy of the Congo’s independence, Etienne Tshisekedi. One of the first student leaders at the University of Lovanium in the late 1950s, the elder Tshisekedi was an early supporter and close advisor of Mobutu – and he co-authored the Nsele Manifesto, which served as the foundation of Mobutu’s state-party, the Mouvement Populaire de la République. Later, Tshisekedi broke away from Mobutu and created the first major opposition party to the general, the Union pour la Démocratie et le Progrès Social, a political machine that also opposed the rule of the two Kabilas and that allowed Félix to access power.

During the electoral campaign of 2018, an archival document from 1961 resurfaced. Possibly a forgery, it directly implicated Etienne Tshisekedi in the machinations that led to Patrice Lumumba’s assassination. Yet, this specific haunting of the 1960s did not incriminate Félix as intimately as the rumors about his alleged Rwandese origins did for Joseph Kabila. The fact that Tshisekedi’s government demanded and organized the repatriation of Lumumba’s last physical remain from Belgium – a tooth that had been kept for decades by one of the Belgian policemen who had dissolved his body in acid in the days that followed his assassination – may also be paradoxically a sign of the less cumbersome presence of the 1960s.

That the decade I study in my book appears less as a directly usable past now than when I started the research does not mean its exploration is any less relevant. The passing of a generation, the greater distance of time, and fading memories can help us to better understand what was lost and what constituted the specificities of a period that is now past, but that remains nonetheless a key component in the history of the present. Ultimately, that is what the book is after: the unique landscape of constraints and possibilities that shaped student politics in the 1960s, when Congolese both experienced the exhilarating abolition of the barriers to mobility and advanced education that were so central in the Belgian colonial system, and the violent collusion of their country’s decolonization with the cold war. 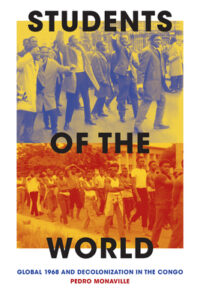 Students suddenly enjoyed multiple possibilities to explore the world and create connections with people, organizations, and political projects in various distant locations; at the same time, the so-called Congo crisis that placed the country at the center of the world’s attention led to an absolutely brutal internationalization of Congolese affairs. The challenge for students activists was to learn how to navigate this complex landscape. Doing so, during a decade that witnessed a powerful re-emergence of the ideas of revolution and international solidarity, they critically engaged with the place of the Congo in the world in a way that continues to resonate and that can still inspire, despite the now long-gone sociological and political infrastructures that sustained their political imagination.

Pedro Monaville is a historian. He has written about student politics, popular culture, and memory in the Congo. He is currently teaching at New York University Abu Dhabi. His new book, Students of the World: Global 1968 and Decolonization in the Congo, is available here.

Featured photograph: ‘Four leaders from the eastern front (Congo-Leopoldville)’ (original legend) including Julien François Matutu (third from the right), a Congolese graduate from Lincoln University in Pennsylvania who collaborated with Malcolm X around his advocacy for the Congolese rebellion. Photographer unknown, ca. 1967 (source: Monaville’s collection).