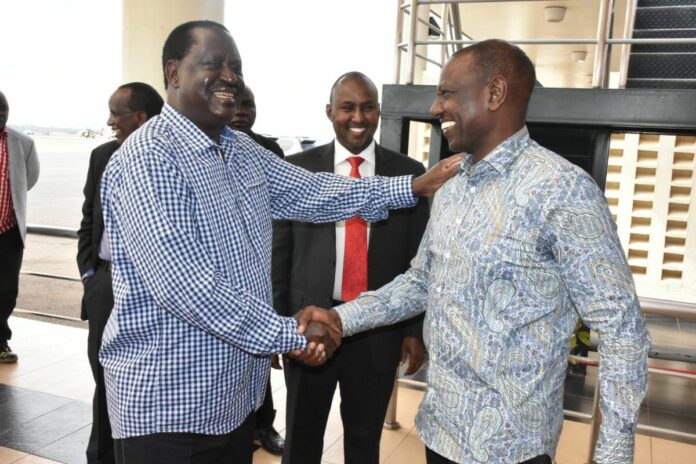 Yusuf Serunkuma argues that the apparent success and smoothness of electoral ‘democracy’ in African states is a recipe for disaster—just as bad as Africa under conflict. Beneath the hype is the ruthless continuity of economic and political control by Western companies and governments. Serunkuma argues that elections across the continent are invariably a trap that disguises naked and unabashed plunder.

As the continent examines Kenya’s election it is important to remind the African continent – and this is a difficult reminder to make – that the failure to smoothly change governments has never been the cause of our underdevelopment. If our problems are access to healthcare, education, women empowerment, infrastructure development, poverty etcetera, a so-called good and smooth election is not the response.

We are at the bottom of the development indices not because of an apparent democratic deficit, but because we are still a colonised continent, looted for sport (in many, many ways) and the pursuit of ‘democracy’—in whatever form—simply fits into the new technologies of continued colonisation.

I know innumerable ‘democracy merchandisers’ [Frederick Golooba-Mutebi’s term] are all over the continent producing endless statistics about how democracy delivers development. These range from folks I have described as the new intellectuals of empire from Europe and North America, to seemingly benign institutions such as the European Union, European and western diplomatic missions with outfits such as DGF (Democracy Governance Facility), USAID, and several others. Interestingly, somewhat ironically, the people working in these sophisticated colonial outposts are ‘our friends’, and they have also conscripted many of us in academia and the mainstream media to this narrative line: that their democracy is the best form of leadership. This has been done so thoroughly that it feels like an organic movement.

There are hundreds of thousands of democracy-chanting clones in the NGO and CSO world.  We spend entire lifetimes writing proposals—which are generously funded by these rich friends—in an expensive infantilism of “growing democracy” and “defending human rights.” Although over three decades of academic posturing, NGO and CSOs work in these areas of human rights, medical health, and so-called democracy outreach on the continent, we remain economically impoverished and abused in ways identical to the colonial period.

So now, we watch the aftermath of the disputed Kenyan elections with bated breath, hoping it goes well, and that its success in correcting the dispute will set the example for the continent.

But this is actually the trap.

African resources ranging from coffee (Kenya, Ethiopia, Uganda, Ivory Coast), marine resources (Lake Victoria, Indian Ocean), minerals in DRC, Tanzania, and Zambia (copper, timber, gold and cobalt) are pillaged not because of the bad leaders in office or because of a failure to democratise, but because of unequal exchange enforced by our “former” colonisers. Interest rates in sub-Saharan Africa—with mostly British and American commercial bank monopolies—averages at 15%, which is literary, free money stolen from Africans businesses. As New Political Economy showed last year, between 1960 and 2010, Europe and North America stole from the African continent US$152 trillion. To put this figure in perspective, the Germany economy is estimated at US$5 trillion annually while the US is US$25 trillion. This is why we are lagging behind.

The two main presidential contenders in the Kenyan elections—Raila Odinga and William Ruto—were neck-to-neck in the count, which meant that these two prominent Kenyans apparently represented major constituencies and ideals in the country. But if democracy privileges the government formed by the majority, the idea of a +1 majority is simply ridiculous in the sense that small difference marginalises the voices of 49% of the country.  Yes, in the winner-takes-all approach to governance, the general populace is the loser.

Please note that on either side of these political camps are Kenya’s most ‘educated’, but like everywhere on the continent, the Kenyan elite is a very small group of persons. I do not mean the “corrupt corporate elite,” but the actual people with brains [education and exposure] to do things like negotiating with the very shady and colonialist international trade organisations, and laying the groundwork for sustainable and profitable exploitation of African human and natural resources. In fact, Kenya actually needs all its brilliant folks on either side of the divide to whisper together and ‘build Kenya.’

I know this sounds like day-dreaming on my part. Because the trickster will ask: How do you get them to select their leadership and work together without going through a competitive electoral process? This question is at the core of our colonial capture. The foolish idea that good leadership only emerges from competitive electoral processes with universal adult suffrage is the epitome of colonial manipulation, which sadly, many in Africa have been infected with.

In truth though, in Africa competitive electoral processes have only served to divide the few  who then spend entire lifetimes trying to perfect an imperfectible system. That is how one ends up with dead wood in government [Museveni referred to his government as one composed of “fishermen”] with the ‘educated people’ either as commentators or forming a largely useless group humoured as “the opposition.” I will not give examples.

To appreciate the dangerousness of this democratic trap—where electoral processes are dreadfully mixed up with civil liberties—one has to consider countries which do not go through this drama. And I am not talking about China, which is the world’s manufacturing power, neither am I talking about Russia or Iran (and save me the human rights malarkey as Julian Assange is being punished for simply exposing the crimes of our ‘democratic examples’). I am writing about Libya, a country while under Muammar Gaddafi ranked highest on UN Human Development Index on the African continent, above South Africa. This country, though under an autocratic leadership delivered public goods and services to its people and also extended credit and grants to the rest of the continent. With its massive civil liberties problems, Gaddafi’s Libya—specifically its independence from colonial control and impressive delivery of public goods and services—could easily be the dream of all Africans.

Yet I fear that this dream cannot be delivered through smooth elections (and a shallow democracy that is not worthy of its name). Their “smooth elections” are actually not just a form of distraction, but also the post-1980 craft through which pillage of African resources—often euphemised as free markets—has been executed.

A version of this blogpost first appeared in The Pan-African Review as ‘Kenya’s “smooth” election perfects Africa’s underdevelopment’ on 15 August 2022.

Yusuf Serunkuma is a columnist in Uganda’s newspapers, scholar and a playwright. Yusuf Serunkuma’s recent publications include an edited volume with Eria Serwajja, Before the First Drop: Oil, capitalists and the wretcheds of western Uganda, and Non-Essential Humans: Essays on Governance, Ruin and Survival in Covid-19 Uganda, both books published by Editor House Facility (EHF), Kampala.