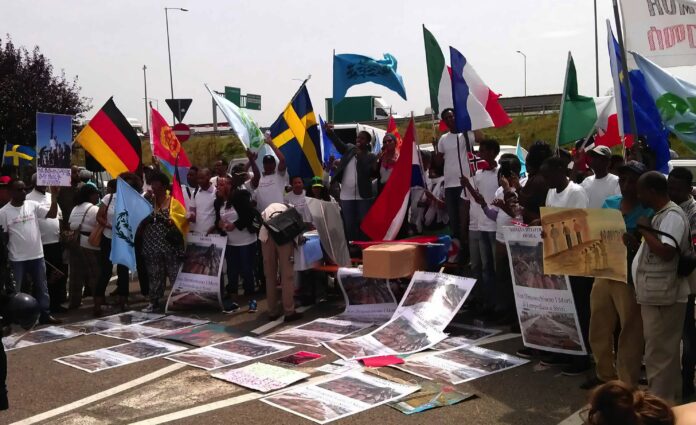 A fierce battle is under way between supporters and opponents of the Eritrean government in the diaspora. Martin Plaut reports on the protests and opposition to regime sponsored Eritrean festivals across the world which have been a major source of income and support for the regime over decades.

Across the globe, from the United States to Sweden, Switzerland, the Netherlands, Germany and the UK, the opposition have attempted to halt the festivals which have been an important source of revenue and support for President Isaias Afwerki and his party for over four decades. A cat and mouse game has been played out among the diaspora, with the president’s supporters attempting to win maximum participation, while at the same time keeping the location of the events secret until the last moment.

Opponents of the festivals – critics of the Eritrean government’s notorious human rights abuses – have used a variety of tactics, from legal and political pressure to protests and demonstrations, to try to stop them. These protests have been escalating in recent months and have involved activists from both camps travelling across borders, with passions running high. Stones have been thrown, police have intervened and threats have been issued.[1] 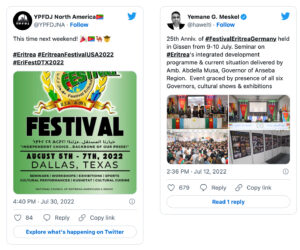 The Eritrean regime is determined to retain control over the diaspora, from which it receives a substantial proportion of its revenue from taxation and donations, as well as political support. Their critics living abroad, many of whom have risked their lives and put their families back home in danger by fleeing from their country, are determined that the festivals will not go unchallenged. For both sides the stakes are high.

A history of international festivals

Eritreans have celebrated a range of festivals, most of them religious, over the centuries, but the political festivals associated with the ruling party date back to 1974. The Eritrean People’s Liberation Front (EPLF) initiated the Summer Festival in the Italian city of Bologna in 1974. The aim was to draw the Eritrean community together and to cement their relationship with the fight for independence.

Festival of Eritrea in Bologna was an annual folk-fair where social, economic, and political resources were mobilised and negotiated and put together mainly in the form of live stage shows in the presence of liberation struggle representatives, exiles, refugees and other categories of diasporic Eritreans.[2] As one blogger put it: “For all intents and purposes, Bologna was Eritrea’s second city, after Nakfa, from 1974 to 1991.”[3] During its time in Bologna, the festival was used for many purposes. It was an opportunity for the exiled community to come together and have a good time: to dance, eat and drink. There were football matches with teams representing the many countries in which they lived: Italy, Germany and Sweden, or else the cities they were resident in, such as Milan, Florence and Bologna.[4] Eritreans held the Bologna festival in great affection. “All Eritreans scattered in the entire world, we all met there once a year. This is why it was different for us, Bologna was a miracle, something longed for which fell from the sky,” one Eritrean woman told an interviewer.[5] 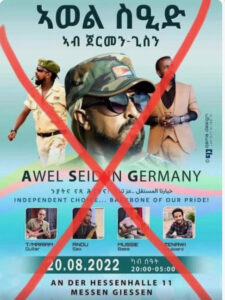 The purpose of the gathering in Bologna went beyond this: they were designed to raise funds – as another government supporter made clear. “Festival of Eritrea in Bologna was highly instrumental towards boosting economic capability and strengthening political activities of the EPLF… A total of $US1.5 million was then sent from Eritrean communities in the abroad to the EPLF.” Eritreans went to extraordinary lengths to support the fight for liberation from Ethiopia. Those in the diaspora who could not participate in the battles inside Eritrea itself gave up their studies to work and send money home. Some are even said to have taken to eating pet food to cut their expenditure so that they could increase their donations.[6]

After independence was internationally recognised in 1993 it was assumed by Eritreans that their government would establish the democracy they had been promised. While international financial institutions assumed that the new government would publish an annual budget and establish working relations with the World Bank and IMF. Both assumptions were proved wrong. With no functioning constitution and without elections ever being held, President Isaias cracked down further. In September 2001 he arrested some of his closest party associates (the so-called G15) who had publicly criticised his authoritarian rule. All independent media were closed down. Eritrea became Africa’s most repressive state.

Eritrea became increasingly isolated. The UN Security Council imposed sanctions on the country’s leaders in 2009 following their support for Somali Islamists from al-Shabaab.[7] The UN Human Rights Council labelled Eritrean government’s indefinite conscription tantamount to slavery. For President Isaias who was dependent on the 2% taxation he extracted from the diaspora for revenue, ensuring the support of Eritreans abroad was critically important. The festivals took on an increased significance after 2001, as the diaspora’s disillusionment with the regime grew.

In 2014, on the fortieth anniversary of the first Bologna festival, Eritrea’s ruling People’s Front for Democracy and Justice (PFDJ) held a three-day festival in the same city. Key figures from the government were invited including Yemane Gebreab, political director of the ruling regime; Yemane Gebremeskel, the director of the Office of the President; Osman Saleh, Foreign Minister; Hagos “Kisha”, finance director of the ruling party and Woldenkiel Abraha, Minister of Local Government. The opposition website, Awate, described what happened next:

For the last three days, the Italian city of Bologna has been a battleground for a showdown between the supporters of the Eritrean regime and its resistance forces.

Hundreds of supporters of the regime travelled from all over Europe to attend the festival that was sponsored and organised by the Eritrean ruling party. Almost all senior members of the Eritrean ruling party flew in from Asmara to attend the festival and brought along singers, music bands, poets, comedians, dancers, and actors.

At the same time, hundreds of resistance members flocked to Bologna to show their defiance of the Eritrean government.

Several attempts were made by Eritreans opposed to the regime to dissuade Bologna city authorities from allowing the PFDJ festival to take place. The authorities didn’t heed to the appeals.

Infuriated that the Eritrean leadership could make their presence felt so directly in the city in which so many exiles had sought sanctuary, members of the opposition confronted the festival organisers directly. The response was violent, with a group of regime supporters identified as “Eriblood” photographed with their fists in the air, beating up the protesters and driving cars at them. 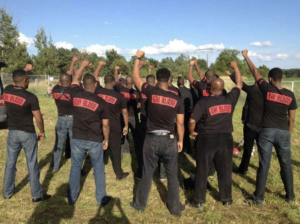 For years there has been a growing contestation at festivals between supporters and opponents of the Eritrean government. In 2018, for example, a sporting event organised by the ruling party in Manchester attracted a protest. The response from the organisers was to attack them with hot chili sauce, bottles and cans.

The festivals, once centred on Bologna or Milan, are now held across the world, wherever the PFDJ can gather its supporters. However, they have taken on a new tone. Gone are the major government figures who regularly took to the stage. In their place have come singers, musicians and performers who draw in the crowds – particularly younger Eritreans. This is, at least in part, explained by the sanctions imposed by the United States on named Eritreans and key Eritrean institutions, including the PFDJ. The measures were in response to Eritrea’s role in the ongoing war in Tigray, which began in November 2020. As the US Treasury statement put it: “Today’s action targets Eritrean actors that have contributed to the crisis and conflict, which have undermined the stability and integrity of the Ethiopian state.”

Despite these restrictions the PFDJ has managed to hold successful festivals in the US – including a conference followed by a festival held in Dallas this August.[8] The festival is reported to have been attended Sofia Tesfamariam, Eritrea’s Ambassador to the United Nations, and some 12,000 Eritreans and their supporters. It is estimated that the events raised up to US$1 million. The mayor of Dallas officially welcomed the festival.

This was in sharp contrast to events in Europe. While some have gone ahead, the organisers have run into trouble in the Netherlands and Germany (where they had to be cancelled) and they are being challenged in Switzerland and Sweden. Sometimes the events have been called off because the authorities refuse to issue permits because the speakers are accused of hate-speech and stirring up animosity. In others they have been cancelled because of confrontations and protests.[9]

The once almost universal support for the Eritrean government among the diaspora is now a thing of the past. For President Isaias this is a clear challenge, and he has expended considerable time and energy to try and shore up his hold over the exile community, but this is gradually eroding.

Young Eritreans of course love to meet each other, drink, and dance to the music from back home, but many have now seen beyond these attractions and are determined to fight back against the regime. There is a great deal at stake and the festivals are becoming sites of major confrontation with the Eritrean state.

Martin Plaut is a Senior Research Fellow at the Institute of Commonwealth Studies at the University of London and a regular contributor to ROAPE. For years Martin worked as a journalist and researcher focusing primarily on southern Africa and the Horn of Africa.

[3] Nakfa was the only Eritrean city continuously under Eritrean control during their 30-year fight for independence, from 1961 – 1991.

[4] Anna Arnone, Being Eritrean in Milan: The Constitution of Identity, PhD, University of Sussex, 2010, p. 97