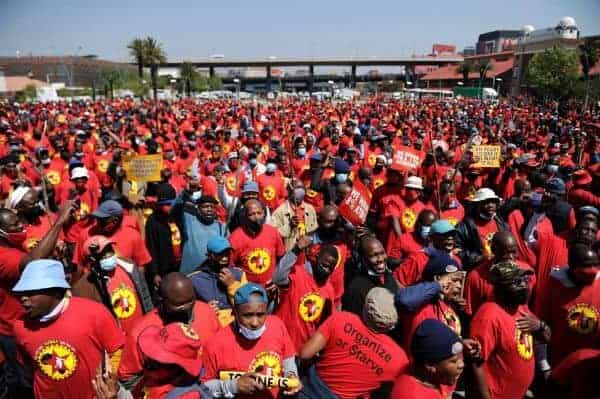 Ghanaian unionist Prince Asafu-Adjaye reviews a recently published, open access collection of articles assessing the state of trade unionism in Africa, with a focus on Ethiopia, Ghana, Kenya, Tanzania, Cabo Verde, and the politics of gender. Asafu-Adjaye argues that the collection challenges the commonly-held notion that trade unions in Africa are on the decline, and provides crucial lessons for those seeking to revitalise trade unionism on the continent.

The open access May 2022 (Special Issue) of the Global Labour Journal provides critical and refreshing accounts of the state of selected trade unions in Africa. Its grounded narratives constitute a vital alternative to the unanimity on the dearth of vitality among contemporary trade unions on the continent. This Special Issue re-opens the old debate on labour aristocracy and its emerging reformulations that query the legitimacy of the claims by African trade unions to represent workers on the continent. It illustrates successful attempts by trade unions to reinvent themselves through organising – increasing membership numbers and inclusion of women, youth and informal economy operators – institutional capacity building, and struggles to promote the interests of workers amidst significant internal and external constraints.

The introduction to the Special Issue provides a good account of the history and present condition of trade unions in Africa. It highlights trade union alliances with nationalist political parties in the decolonisation of the continent, the suppression of trade unions by post-independence states, and the debilitating impacts of neoliberal socioeconomic policies on workers and their trade unions since the 1980s. The writer also articulates how exemptions of trade unions from policy spaces and internal trade union limitations – financial constraints, bureaucratic paralysis, and inefficient management – detract from trade union struggle against the neoliberal onslaught on the rights and interests of workers in Africa.

It is in view of the above prognosis that the article on Trade Union Resurgence in Ethiopia is refreshing, breathing an air of optimism into the debate on trade union vitality and renewal in Africa. In this article, we see the regeneration of trade unionism in Ethiopia, manifesting in the substantial growth of trade union membership – increasing from 415,000 in 2015 to 751,800 in 2020 – and spikes in collective action. Noticeably, the Ethiopian Confederation of Trade Unions (CETU) forced the renegotiation of a draft labour bill and opened up the hitherto no-go industrial parks to unionisation. Interestingly, these gains came despite the persistence of significant structural vulnerabilities of trade unions – institutional isolation due to the absence of a broad social coalition, financial weakness, active resistance by employers, and latent opposition by the state. Hence, this article teaches us that trade unions on the continent can renew and achieve significant gains even in the face of significant challenges.

The second article – Oil in Ghana: The work of the General Transport, Petroleum and Chemical Workers’ Union (GTPCWU) – draws on coordination and context-appropriate power theory to examine the ability of GTPCWU, the main trade union that organises in Ghana’s oil and gas sector, to exercise power. In this article, we learn that despite its challenges – low participation by youth and women, union substitution tactics, casualisation, and laxed enforcement of labour laws and local content regulation – the GTPCWU exerts modest structural power. It invests in institutional capacity development through the training of officials and rank-and-file members, the development of a membership database, and youth-based and gender-based recruitment. Notably, the GTPCWU has utilised picketing to end union-busting and racial discrimination at two multinational oil and gas companies.

These achievements notwithstanding, this article demonstrates that wielding structural power may not mean exercising institutional and conditional powers. The use of institutional power by GTPCWU is wrecked by the weak enforcement of employment legislation and long bureaucratic procedures. The conditional power of the union is undermined by the paucity of public sympathy due to the perception that oil and gas workers have secure and well-paid jobs. It is in this light that the triumphs of the GTPCWU, albeit limited, should inspire other trade unions in Africa, teaching them that it is possible to wrestle concessions from capital in strategic sectors.

Nonetheless, trade unions in Kenya and Tanzania organise informal labour through 1) the incorporation of existing informal economy associations as branches and 2) recruiting individual informal economy operators into existing unions. Crucially, trade unions extend vital services and benefits to their members in the informal economy. These include negotiation of terms and conditions of work with employers – where there are employer-employee relationships – and public authorities, business skills development and financial services support, and facilitation of dialogue between informal economy operators and municipal authorities. In essence, this article teaches us that defining workers and the attempt to extend organising beyond the traditional constituency of trade unions – formal workers – can be fraught with internal trade union contestations. Trade unions may need to walk tight ropes that requires balancing the imperatives for unity and designation of informal economy operators as workers in order to extend trade union constituency and political power, while paying attention to the necessity to preserve exiting traditional boundaries in order to protect established privileges and power structures.

The fourth and final article focuses on ICTs, distributed discourse and the labour movement in Cabo Verde: why weak communications remain a crucial barrier to trade union effectiveness. This article provides useful insights into the use of ICT as a trade union revitalisation tool in an African country. The authors demonstrate the importance of digital technologies in internal trade union communication, such as the utilisation of social media and instant messaging apps for information dissemination and interactions. In this article, we see how the deployment of video conferencing reduced the inequality of participation among trade union structures in core and peripheral islands in Cabo Verde. It also promoted equality of participation among individual union members in decision-making, bringing about progress in accountability and transparency. These positive advances occurred in spite of the fact that ICT usage by trade unions in Cabo Verde is beset by two important obstacles. First, the high cost of quality digital technologies limits access to hardware devices, resulting in networking software and support services challenges and a digital divide across islands. Second, the utilisation of ICT in trade union interaction with members sometimes comes with misunderstandings. These hindrances notwithstanding, this article shows that trade unions in Africa can improve engagement with their members through the deployment of ICT.

In view of the foregoing, the collection of papers is a vital addition to policy and conceptual propositions on trade union renewal on the continent. Notably, it demonstrates the imperatives of extending trade unionism into the informal economy and how to go about it, elucidating the opportunities and obstacles involved in defining workers in ways that makes informal labour a critical trade union constituency. In addition, the empirical evidence provided by the articles – showing the ascendancy of trade unionism in Ethiopia, the exercise of power by the GTPCWU in the petroleum sector in Ghana, and deployment of ICT by trade unions to foster interactions between union structures and members in Cabo Verde – gives us optimistic lessons on trade union revitalisation in Africa. African trade unions can take inspiration from the many lessons provided by the articles. Beyond its trade union policy relevance, the critical and grounded narratives question some of the theoretical and conceptual assumptions that underpin the generalisation on the lethargy and crisis of trade unions and labour movements.

Prince Asafu-Adjaye holds a PhD in Development Studies from SOAS, University of London. He is the Deputy Director of the Labour Research and Policy Institute of the Trades Union Congress in Ghana.