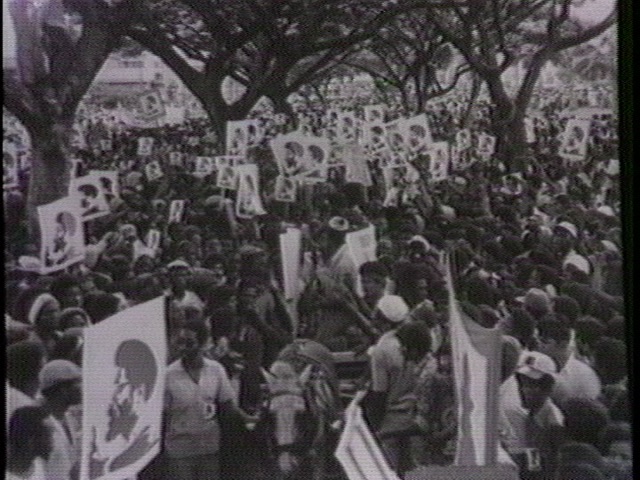 As the popular rebellion, workers strikes and action in Guyana went into retreat in 1979, the Working People’s Alliance and Walter Rodney fought hard to revive them. State repression, with the murder of activists, police harassment and raids, made organising and fighting back difficult. Rodney and the WPA were obliged to consolidate and try and resist. Chinedu Chukwudinma describes the last year of Rodney’s life as the struggle ebbed.

In November 1979, Rodney spoke at a meeting on the corner of Lamaha Street in Georgetown. But the ruling People’s National Congress’ (PNC) armed thugs stormed the gathering and chased Rodney through a district of the capital. Rodney escaped after hiding in a sewage trench and then reached his friend’s home “smelling like an unwashed ram goat”.[1] It was not the first time Rodney had to run for his life, but the ferocity of his assailants signalled that the dictator Forbes Burnham wanted to eliminate his opposition at any cost. Rodney was able to escape this time. Some of his comrades were not so fortunate. The Guyana Police Force shot and killed leading Working People’s Alliance member Ohene Koama on the 18 November. Koama was the first WPA activist to die at the hands of the state, and his death signalled a decline in the civil rebellion.

Rodney observed signs of the movement’s retreat as the state’s repression made it difficult for the WPA to organise in the streets. The police sabotaged the WPA’s cars and speaking equipment and detained Rodney on three occasions between September and October.[2] Rodney and the other WPA leaders knew the mass meetings and protests of the summer had shielded them from onslaughts from the state. But the vanishing struggle left them exposed. When the Burnham regime threatened to bomb their home, Rodney and his wife Patricia moved their family to different safe homes on a nightly basis. Other WPA members also moved from safe house to safe house to avoid police raids and harassment as they tried to come to terms with the ebb of the civil rebellion.

Eusi Kawayana argued that civil rebellion retreated with the collapse of workers’ strikes, which he saw as the backbone of the movement.[3] There was frustration among the WPA leaders as the united action of the miners and sugar workers failed to grow into a general strike. The WPA was not rooted among the sugar workers and was unable to raise their combativeness, as they still suffered from the defeat of their 135-day strike in 1978. Its influence had not extended beyond the capital and some mining regions. In May 1980, Rodney criticised the defeatism of the leadership of the People’s Progressive Party (PPP), trade unions and anti-dictatorship groups who failed to grasp the potential of the strikes and protests—they believed the regime would be left unshaken.[4] The opportunistic PPP saw industrial action only as a platform for its electoral campaigns and as a lever for its negotiations with the PNC, while the trade union leaders lacked the confidence to withstand the threats from the state. After bullying the unions into submission, the state fired the most militant workers replacing them with scab labour.

In the aftermath of the retreat of the civil rebellion, the WPA claimed that Guyana was not ripe for revolution because the armed forces had failed to join the protesters. Some of its leaders adjusted to the downturn by focusing on building new WPA branches and working towards a government of national unity. Yet, without the mass protests, the party was more exposed to Burnham’s thugs who murdered a second WPA member, Edward Dublin, in February 1980. It is conceivable that the sheer repression from the PNC, during and after the civil rebellion, led Rodney and the WPA to consider armed resistance.[5]

Three decades later, WPA leaders Rupert Roopnaraine and Tacuma Ogunseye disclosed that their party accumulated weapons during that period. Although Roopnaraine told filmmaker Clairmont Chung that the WPA was preparing itself and the masses for an insurrection, he never defined what he meant by insurrection.[6] A few years later, Ogunseye explained that Rodney, Roopnaraine and himself formed a security committee that supplied 12 automatic guns to WPA underground cells for the party’s self-defence.[7] No other WPA activist has confirmed the claims of these leaders, and the PNC never charged any WPA member with handling weapons.

Regarding Rodney’s alleged role in the WPA security committee, Ogunseye claimed that Rodney was building links with the army to prepare the ground for the military to join the masses in the next popular rebellion.[8] Roopnaraine’s account reveals another possible aspect of Rodney’s activities at the time. He argued that Rodney ached to revive the mass movement out of fear it would forever disappear. In April 1980, he helped smuggle Rodney to neighbouring Suriname, so that Rodney could fly to Zimbabwe’s independence celebrations and seek support and weapons to reignite the civil rebellion. When he received no such assistance, said Roopnaraine after visiting Rodney upon his return, “he (Rodney) was in a very low place morale had dropped…. Walter was always very sensitive about the need for militancy.”[9]

After his death, his mentor CLR James said that Rodney overestimated the inclination of the Guyanese people to take up arms against Burnham. James also presumed Rodney paid no attention to training WPA leaders and cadre in the art of insurrection—he instead wanted to lead by example and take his own risks. He also blamed the WPA for failing to keep Rodney away from the front lines.[10] While there was space for armed resistance within Rodney’s politics as he studied and admired the likes of Che Guevara and Frantz Fanon, it is unclear how he planned to respond to Burnham’s repression. James was not in Guyana in the late 1970s, and therefore his knowledge of events was limited. Does his argument that Rodney undertook too much risk and that his comrades failed to protect him have any semblance of truth?

A part of the answer lies in the fact that many WPA leaders were unaware of the operations of the security committee though they knew about its existence. According to Roopnaraine, some resigned from the party’s executive, disappointed by the lack of accountability from their peers, upon learning that Rodney had been smuggled to Zimbabwe. Furthermore, WPA leaders bore all the burden of secretly acquiring arms and equipment, of which a considerable amount came from the military. Roopnaraine said in conclusion: “We found ourselves at all hours of the night in strange places, doing dangerous things… the miracle is that more of us didn’t get killed”.[11] But Burnham and the PNC murdered Rodney.

On 13 June 1980, Rodney and his brother Donald went to acquire walkie-talkies from an ex-army officer, Gregory Smith. They did not suspect that Smith was a PNC informant. When Rodney activated the device in his car, it exploded and killed him. The Guyanese working people mourned the loss of their leader while Burnham rejoiced. The next day the police and the army patrolled the streets fearing that Rodney’s death would spark another uprising. They raided Rodney’s mother’s house searching for weapons, and anonymous leaflets appeared on the streets with a message: “he who lives by the bomb shall die by the bomb”.[12]

Rodney’s funeral was the largest ever held in Guyana. Thirty-five to fifty thousand Guyanese of all races, ages and genders attended his funeral to wish their beloved leader farewell. Patricia led her husband’s procession chanting “fight back, fight back”.[13] Rodney once said that when revolutionaries fall, “they are lost, it’s an irreparable loss that may … qualitatively affect the development of the struggle in another phase”.[14] His death represented that loss for socialist revolution in Guyana.

After Rodney was murdered, the WPA did its best to continue the struggle. It established bases across the country despite Burnham’s repression. The party, however, gradually relinquished its revolutionary socialist program to adopt an electoral strategy after Burnham’s illness and death in the mid-1980s. The new strategy made it incapable of challenging the racial divide that still plagues Guyana today. The WPA never performed well in elections. The civil rebellion of 1979 had shown that African and Indian could shake off their racial prejudices and see one another as part of the same class when they engaged in united strikes and protests. In contrast with that collective struggle, elections counted on the passivity, uncertainty and individualism of a people who had been shaped by centuries of racial oppression. Far from promoting the anti-racism of the small WPA, election campaigns galvanised existing racial divisions as leaders of the much larger PNC and PPP continued mobilising Africans and Indians against each other to win votes. Following the PPP’s victories in Guyana’s first free elections in 1992 and 1997, African PNC supporters attacked Indians, ransacked polling stations, and clashed with the police. These tragic episodes of racial violence showed that real change could not be achieved through the ballot box.

All of Rodney’s writing and activism in Guyana had underlined the centrality of class struggle for fighting racism. It’s only by fighting against the ruling class in the streets and the workplaces that African and Indian workers could realise their common interest and overcome their prejudices. Every victory, big or small, could strengthen the confidence of the working class and encourage its unity against capital. Rodney saw a revolutionary party as essential for challenging racist ideas and for shaping the fight for socialism. If the workers failed to overcome their racial divide, they would be unable to defeat capitalism.

Featured Photographs: we are grateful to Christopher Laird for the images.

[7] Tacuma Ogunseye in The Walter Rodney Commission of Inquiry, Verbatim Report of the Proceeding, June 2014.

[8] Tacuma Ogunseye in The Walter Rodney Commission of Inquiry, June 2014.