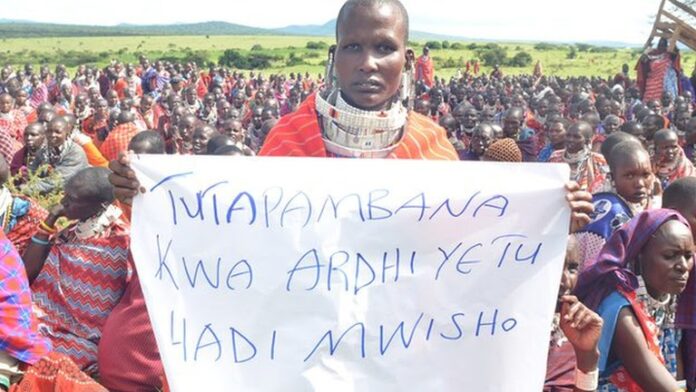 Ambreena Manji writes about the Tanzanian government’s threatened eviction of more than 80,000 Maasai from the Ngorongoro world heritage site in the country. The government claim that the Maasai must be cleared from their land in the interests of conservation and ecology wildlife corridors. Manji writes about what is really going on.

In the past few weeks, the Tanzanian government has renewed its attempt to demarcate land in the Loliondo ward, Ngorongoro district in the north of the country as a wildlife sanctuary, effectively banning the Maasai from their indigenous land. As semi-nomadic pastoralists, Maasai livelihoods depend on cattle herding and some crop cultivation. Access to pastures and to water for their cattle is vital. The Ngorongoro Conservation Area has been a UNESCO World Heritage Site since 1979. But the Maasai have long lived with the threat of displacement to make way for tourism and for conservancies. The government has accused the Maasai of getting in the way of animal migration routes and of breeding grounds and claim that in the interests of conservation and ecology wildlife corridors must be created over Maasai land. The Maasai have organised to resist these moves, accusing the government of using wildlife conservation as a pretext for their eviction.

However, in keeping with Tanzania’s land liberalisation and promotion of foreign investment since the late 1990s, it is widely reported that the cause of this renewed interest in Ngorongoro is the government’s plans to grant exclusive hunting rights in an area of 579 square miles to foreign investors. For the Maasai, this is an intensification of a long-term trend that dates from independence. Since then, the Maasai have already lost over seventy per cent of their land to ‘conservation’. In 1992 an investor from the United Arab Emirates (UAE) was granted a license to trophy hunt in the area. In 2018, a report detailed the devastating impact of private companies in the area: a company called the Ortello Business Corporation had evicted Maasai in order to run a hunting block for the private use of the UAE royal family and their guests and continued to operate in the area after their licence had been cancelled by the Tanzanian Ministry of Natural Resources.

Governed by an overweening Ngorongoro Conservation Area Authority (NCAA), the Masai have little scope for participation in the running of the territory or decision making about its future. The NCAA is accused of acting with secrecy. It is providing little information about the implementation of a new land use and resettlement plan in the Ngorongoro Conservation Area which will lead to the displacement of 80,000 residents, and the demolition of their homes, schools, and medical facilities.

In an echo of the struggles over land classification and definition that are seen elsewhere in East Africa when communities seek to defend their land, the residents of Loliondo argue that the disputed land is village land under the Village Land Act 1999. This legislation sought to devolve authority over decision making on matters such as land administration, land management and dispute resolution to the community level. The Maasai are demanding that their ancestral land be recognised as legitimate village land and not designated as a conservation area.

In their powerful 2017 book, The Big Conservation Lie, John Mbaria and Mordecai Ogada set out to debunk dominant conservation narratives and explore the ‘severe exploitation of the same wilderness [that] conservationists have constantly claimed they are out to preserve’. The renewed transnational land grab currently underway in Ngorongoro confirms this analysis. In 2018, an Oakland Institute report documented how conservation laws were being used to dispossess the Maasai. Before that, a report by Wilbert Kapinga and Issa Shivji (the latter had served as the chairperson of the Presidential Commission of Inquiry into Land Matters) examined the legal powers and administrative practices of the NCA Authority. They set out the limitations placed on the Maasai by the NCAA without prior consultation and participation of Maasai residents in the relevant decision-making processes. They recommended that in the NCAA’s management of the Conservation Area, proper representation and participation of the Maasai and other residents was vital so that they might decide how best to conserve and develop this globally important place.

The treatment of the Ngorongoro Maasai displays certain forms and practices that are recognisably colonial, imposing on them conditions of life that tend towards their eradication or emutai. In Maa – the language spoken by the Maasai people –  the word emutai means destruction or eradication and was first used to describe the epidemics of the nineteenth century when contagious bovine pleuropneumonia, rinderpest, and smallpox wiped out cattle and caused widespread sickness. It is a word with continuing resonance and increasing urgency. In 2018 the Oakland Institute warned that ‘without access to grazing lands and watering holes – without the ability to grow food for their communities, the Maasai are at risk of a new period of emutai.’

Of what does present day emutai consist? Because of the re-zoning of their land by which they are banned from grazing cattle and cultivating crops, sickness and hunger has become common. Forced onto ever smaller parcels of land in order to make way for tourism, the Maasai capacity for social reproduction is severely circumscribed: the daily tasks of grazing cattle and growing food on small family plots has been made illegal. The result is widespread starvation and disease, most especially amongst children. The violent enclosure of their land prevents the Maasai from maintaining life both on a daily basis and intergenerationally. This prevention of Masai social reproduction is a real threat. Severed from land as a productive resource and as their spiritual heritage, the Maasai are bearing the brunt of the government’s efforts to romance the rich and the famous in Ngorongoro. In the words of the Maasai leader, Julius Petei Olekitaika, ‘Imagine your home being burned in front of you to clear your land for foreigners to hunt. Imagine not being able to graze our cows because the government wants to protect a foreign investor whose only interest is hunting the wildlife.’

The struggle of the Ngorongoro Maasai is of vital importance to understanding how ‘fortress conservation’ operates and how it deprecates indigenous peoples’ stewardship of the land. This is critical in the face of the climate crisis. Neo-colonial conservation models are characterised by a security-conservation nexus (intimidation and the use of militias is common) and by links with fossil fuel multinationals.

In Tanzania, the national government and private corporations are colluding. Far from conservation, the aim is the deliberate destruction of the Maasai way of life, ‘preserving’ only those aspects that serve the purposes of tourism through a peoples’ exoticisation, a racist logic of settler colonialism. As the Oaklands Instituterecognises, this will not just force them off their land but ‘force them out of existence’.

Wilbert Kapinga and Issa Shivji argued in their report that the struggle of the Ngorongoro Maasai should not be presented as a minority struggle but should prompt the creation of alliances between all citizens threatened by dispossession and landlessness by the newly introduced land legislation (the Land Act 1999). Analysing the political implications of treating Maasai rights as ‘minority’ or ‘indigenous’ as many international advocacy groups have sought to do, they challenged the use of this terminology, arguing that it would have important impacts on Tanzanian civil society. The authors made a case that has been largely overlooked. By setting the Maasai apart from the mainstream, they would be divided from the rest of civil society. Whilst they had no doubt suffered particular forms of prejudice and had had a particular historical relationship with the state, the authors argued, their situation in terms of their enjoyment of their human rights was not fundamentally different from ‘the rest of Tanzanian non-elite society’. The way forward therefore was for the Maasai to build alliances with the rest of civil society campaigning against the new land law because their concerns ‘fit in neatly with the current struggle in the country’ against land liberalisation.

This important argument encourages us to study the common experience of evictions in urban and rural contexts, recognising their particularities and their histories, whilst seeking alliances beyond the immediate context of each eviction or threatened displacement. It cannot be doubted that the Maasai are subjected to egregious marginalisation and discrimination by the state which are backed up by orchestrated hate campaigns. The task is to articulate their struggles with those of others living with similar threats of dispossession. For, as Salar Mohandesi and Emma Teitalman remind us in their essay Without Reserves, we must recognise ‘varieties of enclosure’: urban dwellers are not immune to enclosure movements that deprive them of their livelihoods.

There have been calls for a commission of inquiry into Ngorongoro. In response, I suggest an elaboration of Wilbert Kapinga and Issa Shivji’s argument above: now is the time for social movements and civil society groups working against evictions – whether urban or rural – to lend the Maasai their support. We must make connections between the dispossession of the Maasai and the wider effects of the liberalisation of land laws and intensified land grabbing in Tanzania and in East Africa more generally.

Ambreena Manji is Professor of Land Law and Development at Cardiff School of Law and Politics. She is the author of The struggle for land and justice in Kenya (James Currey/ Brewer & Boydell 2020; Vita Books 2021).

Featured Photograph: A Maasai woman holding a sign in Kiswahili reading “We will fight for our land until the end,” was taken by Jason Patinkin in April 2013 near Olorien village in Loliondo, Tanzania (it was originally published here).