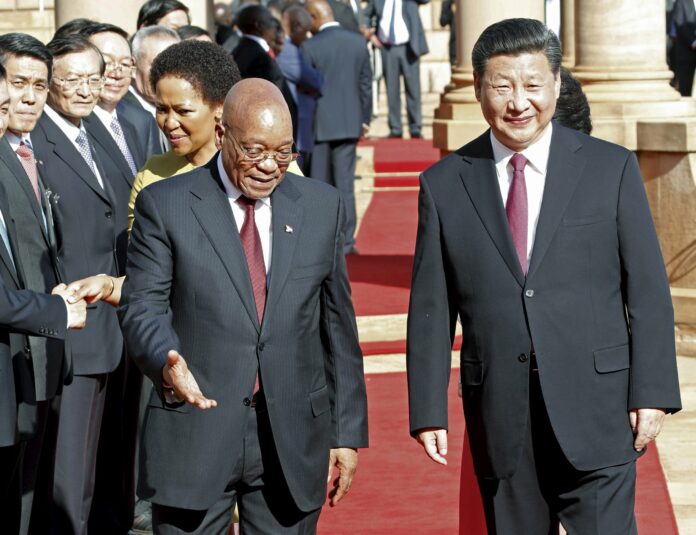 Ahead of the Forum on China-Africa Cooperation (FOCAC), Tim Zajontz looks at the immense amounts of debt African governments owe Chinese lenders. This debt is central to capitalist accumulation and financial extraction from the African continent. Zajontz argues that Chinese capital is now pivotal to the global circuit of capital and China, just like other creditors, uses debt for the conquest of Africa and its resources.

From 29-30 November, the Forum on China-Africa Cooperation (FOCAC) will gather for the first time since the onset of the Covid-19 pandemic at the ministerial level. While the official narrative around the 8th FOCAC meeting in Dakar reiterates ‘win-win cooperation’ (合作共赢) and promises to ‘Deepen China-Africa Partnership and Promote Sustainable Development to Build a China-Africa Community with a Shared Future in the New Era’, the unburdened enthusiasm that once surrounded high-level FOCAC meetings is long gone. Particularly, the immense amounts of debt that some African governments owe Chinese lenders have become a delicate issue affecting Africa-China relations. Several African governments are currently negotiating with creditors and the International Monetary Fund (IMF) how to restructure and manage their debts. It is clear now that, after a decade of unfettered lending from Chinese and non-Chinese creditors, the post-pandemic ‘payback period’ will come at immense social costs. Africa’s debt owed to China will therefore be high up on the agenda of in camera meetings between African and Chinese officials in Dakar.

Even before the Covid-19 pandemic added urgency to the matter, China’s rise to become the world’s largest bilateral creditor, holding 57% of low-income countries’ bilateral debt in 2020, has caused controversies in African capitals and beyond. Chinese overseas lending has been infamously branded as ‘debt trap diplomacy’ and politically instrumentalised by the Trump administration and other hypocrites in the West. The latter have been quick to accuse China of leveraging its influence in Africa through loans, whilst they have usually remained entirely silent regarding the complicity of Western capital in the systematic underdevelopment of the continent. There have since been commendable research efforts to demystify the ‘debt trap’ narrative and to shed light (especially by means of more reliable data) on a topic that is complicated by the opacity pertaining to African debt exposure to China. Accordingly, the China-Africa Project, a news outlet covering Africa-China relations, has recently put to rest the narrative of a ‘Chinese debt trap diplomacy’.

In a recent article in ROAPE, I reflect on the scholarly debate on debt in the rapidly growing field of China-Africa studies and call for a critical research agenda which problematises the function of debt in late capitalism and calls into question dominant development paradigms and policies that have sustained Africa’s financial dependency. According to World Bank figures, the external debt stock of ‘Sub-Saharan Africa’ has more than doubled throughout the 2010s, from $305 billion in 2010 to $705 billion in 2020.

After highly indebted African states had seen debt write-offs under multilateral debt relief initiatives in the 2000s, Africa’s current debt cycle commenced against the background of the ‘commodities super cycle’ and related ‘Africa rising’ narratives. African governments, now with relatively clean balance sheets, rushed onto global capital markets, and increasingly to Chinese policy banks, to sign bonds, loans and export credits. Debt accumulation in Africa has since been further fuelled by the now hegemonic paradigm of ‘infrastructure-led development’, which, as described by Seth Schindler and J. Miguel Kanai, is promoted by a ‘global growth coalition’ that advocates ‘financing and financializing infrastructure’ to get African ‘territories right’ for their seamless integration into global markets.

Much of the scholarly debate around African debt owed to China has been focused on providing an evidence-based corrective to the ‘debt trap narrative’ – doubtlessly a commendable effort. However, we must not risk reducing debt to its discourse but expose its centrality to capitalist accumulation generally and financial extraction from the African continent in particular. Just like capital, debt is a social relation marked by asymmetrical material relations and power differentials between debtor and lender. As Tim Di Muzio and Richard Robbins argue in Debt as Power, ‘debt within capitalist modernity is a social technology of power […]. In capitalism, the prevailing logic is the logic of differential accumulation, and given that debt instruments far outweigh equity instruments, we can safely claim that interest-bearing debt is the primary way in which economic inequality is generated as more money is redistributed to creditors.’ It is primarily the asymmetry inherent to the debt relationship and resultant power differentials – not only the politicised ‘debt trap’ narrative, flawed and problematic as it is – that have made it increasingly difficult for the Chinese government to sustain official narratives that suggest the horizontality of relations between China and the global South.

Chinese (state) capital is now pivotal to the global circuit of capital and, just like other creditors, employs the social technology of debt in Africa and elsewhere. The massive increase in Chinese overseas lending over the last two decades has been central to efforts to address chronic overaccumulation within the Chinese economy through what David Harvey called ‘spatio-temporal fixes’, the geographical expansion and temporal deferral (for instance by means of debt financing) of surplus capital. China’s Belt and Road Initiative (BRI) has become the superstructure to organise a series of such ‘fixes’ and the African continent – in line with the logic of uneven geographical development that is inherent to capitalism – a welcome outlet for Chinese surplus materials and finance capital.

It is now clear that several African governments have overextended themselves by taking on unsustainable amounts of loan financing (both from Chinese and non-Chinese sources). While Chinese lenders have been lenient to reschedule debt payments amidst the Covid-19 pandemic, African governments cannot expect blanket debt forgiveness from Beijing. China’s current spatio-temporal fixes need to see returns eventually.

As the IMF is yet again visiting Addis Ababa, Lusaka, and Nairobi to resurrect fiscal discipline and to ensure debtor compliance for the post-pandemic payback period, it is high time to acknowledge that periodic cycles of debt financing, debt distress and structural adjustment are systemic features of Africa’s integration into the global capitalist economy. It seems apposite to remember Thomas Sankara who – three months before his assassination in 1987 – argued that, ‘controlled and dominated by imperialism, debt is a skilfully managed reconquest of Africa, intended to subjugate its growth and development’. At the time, several African countries had plunged into severe debt crises which paved the way for externally ‘prescribed’ structural adjustment programmes and heralded the era of disciplinary neoliberalism, long before the latter ravaged capitalist heartlands.

Today, three and a half decades after Sankara’s famous speech at the Summit of the Organisation of African Unity, history appears to repeat itself, as Africa is yet again grappling with ‘the issue of debt’. It remains to be seen whether this time around African leaders can form the ‘united front against debt’ that Sankara called for in 1987. The upcoming FOCAC ministerial meeting in Dakar will give a first indication to this effect.

Tim’s article in ROAPE, ‘Debt, distress, dispossession: towards a critical political economy of Africa’s financial dependency’ is available to access for free until the end of December.

Tim Zajontz is a lecturer in International Relations at the University of Freiburg, Germany, as well as a research fellow in the Centre for International and Comparative Politics at Stellenbosch University, South Africa. @TZajontz